When I was compiling the previous list I was forced to leave off several creatures for various reasons. Either they didn’t fit the criteria for the list, they were too similar to others on the list, they seemed too obvious, or in the case of number 1 I completely missed it during my research. Having recently stumbled across the original list, I decided to revisit some of those entries that didn’t make the cut last time. So here are another 10 cases of (mostly) parasitic behavioral modifications. These are in no particular order.

10
Cyborg beetle
The Cyborg Beetles Designed to Save Human Lives

Scientists at the University of California Berkley have developed a wireless flying-insect cyborg. By attaching a radio receiver to a large African beetle and connecting electrodes to its nervous system and flight muscles the researchers were able control the flight of the beetle remotely. A simple electric pulse to the brain signals flight, another is used to signal descent. Left and right turns are achieved by stimulating the muscle of the opposite wing from the direction of the turn. 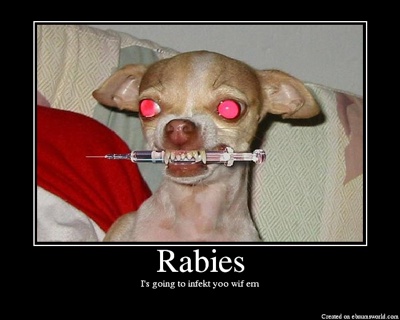 Rabies is a viral disease that causes inflammation of the brain in warm-blooded animals. The virus is usually spread from a bite or scratch. From the point of entry the virus travels to the brain and causes swelling, which if left untreated could lead to death. An infected animal may exhibit uncharacteristically aggressive behavior becoming violent and attacking without cause, increasing the chance of a bite and the spread of the virus. Plasmodium is the genus of the organisms that cause malaria. Normally mosquitoes live on nectar, but when a female is ready to lay her eggs she requires one or two meals of blood for additional energy. Mosquitoes that become infected by plasmodium change their feeding habits. In the early stages the mosquito feeds less often. This gives plasmodium a chance to build up in the mosquitoes saliva. Once a significant number have built up the mosquito goes on a feeding frenzy. Instead of eating one or two meals an infected mosquito will eat over and over and for longer periods glutting itself on blood. Thus increasing the chance of transmission. 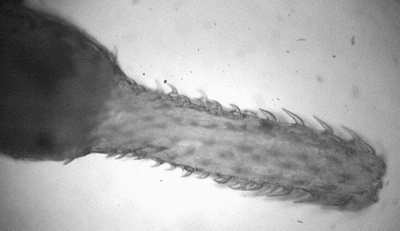 P. laevis is a parasite that uses host manipulation to facilitate its transmission from intermediate to primary host. The intermediate host is the freshwater amphipods of the genus Gammarus and primary host is fresh water fish such as perch. Much like Toxoplasma gondii does with mice, P. laevis manipulates its host to not fear the scent of predators. In some cases the victim actually seeks out the smell. The infected will also spend more time out in the open, increasing its chances of being predated. As well as being attracted to the smell of the predator an infected organism may also show signs of color changes that make them easier to spot by predators.

T. gondii appeared on the first list for its ability to alter the behavior of rodents and make them attracted to the scent of cats. What didn’t appear in that entry was the fact that humans may become infected as well. Infected women seem to become more intelligent, outgoing, conscientious, sexually promiscuous, and kind. Men on the other hand have opposite reactions becoming anti-social, suspicious, jealous and morose. Both sexes tend to be more prone to feelings of guilt, decreased novelty seeking and slower reaction time. T. gondii has also been linked to incidences of schizophrenia and other mental health problems. Anti-psychotic drugs commonly used for people with schizophrenia have been shown to reverse the behavioral changes in infected rodents returning their fear of cats. 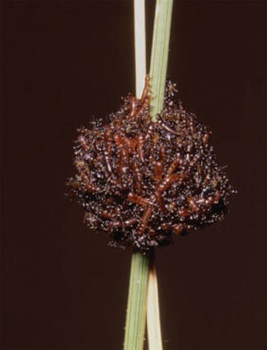 When the blister beetle species M. franciscanus is still in its larval stage it will join with other larvae and form up into a big clump that looks very similar to a female bee. This wriggling clump of larvae produce a chemical that mimics the sex pheromone of female bees of the species Habropoda pallida. When a male bee gets a sniff of the chemical it comes in to mate with the clump and the larvae hitch a ride. The larvae are then transferred to a female bee during mating. After successfully mating the female bee burrows into the ground and lays an egg (and the tag-along beetle). The larva then eats the pollen the bee provided for its young and then parasitizes the bee larva. 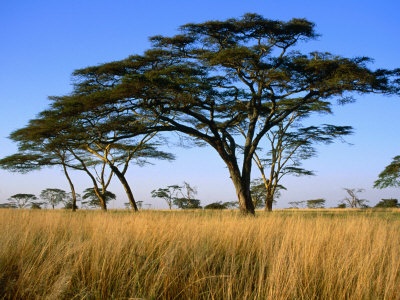 The relationship between the acacia tree and the ants that live on it has long been thought of as a symbiotic one. The trees provide nectar for the ants to feed on and the ants protect the tree from other plants and animals that would potentially damage it. New research is showing that the relationship is more one sided than originally thought. It turns out that the acacia tree is able to produce chemicals that actually drive the ants into a defensive frenzy. It also turns out that the tree can also produce chemicals to drive the ants away completely, like when it is time to produce more pollen. The chemical is thought to be in the pollen itself. So after it has all been carried off by bees and birds the ants return.

The alcon blue butterfly is a brood-parasite. Much like the cuckoo bird uses other birds to raise its young, the alcon blue uses ants. The caterpillars secrete a chemical cocktail which mimics those of local ant larvae. If an ant happens to find a caterpillar it will pick it up and carry it back to the nest and care for it as if it were one of its own. The ants feed, clean and care for the caterpillar even to the point of ignoring their own brood(the caterpillars may even eat the ant larvae). The caterpillar can spend as much as two years mooching off the ants before finally forming a chrysalis and eventually becoming a full grown adult butterfly.

But as if raising the butterflies young wasn’t bad enough… 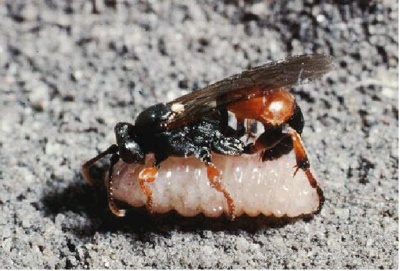 Ichneumon eumerus is a wasp that parasitizes the alcon blue butterfly. When I. eumerus detects an alcon caterpillar inside the ants nest it, like the caterpillar, releases its own chemical cocktail. The ants are repelled from the wasp and driven into a frenzy even going so far as to attack each other. In the confusion the wasp slips into the lair, locates the caterpillar and deposits an egg inside it. After the wasp leaves things slowly return to normal and the ants go back to caring for the caterpillar. But when the alcon forms a chrysalis what emerges is a wasp and not a butterfly. 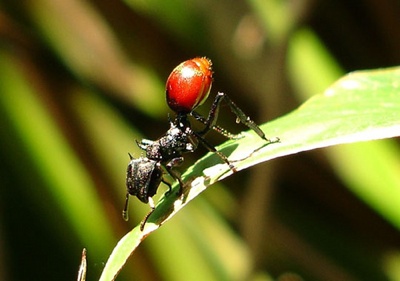 The hits just keep on coming for our friends the ants. M. neotropicum is a tetradonematid nematode parasite. The primary (and so far only known) host species is Cephalotes atratus, an ant in the South American rain forests. C. atratus is an ant that is normally all black, but an infected ant has a bright red gaster that resembles berries found in the canopy. This change is believed to trick birds into eating the ant so that it can spread the eggs in its droppings. The droppings are gathered by the ants and fed to their young who then become infected, completing the cycle. But changing the color of the ants abdomen isn’t the only trick up M. neotropicum’s sleeve, it also alters the ants behavior. An infected ant begins to forage away from the colony more, it becomes sluggish, and It holds its bright red butt up in the air making it look very much like a juicy berry.