Controlling the minds of other living creatures is simply the stuff of science fiction right? Well for some creatures becoming a real live zombie is a daily hazard. Here are 10 examples of real parasitic behavior modifications. These are in no particular order.

The genus Pseudacteon, of which 110 species have been documented, is a parasitoid of the ant in South America. Members of Pseudacteon reproduce by laying eggs in the thorax of the ant. The first instar larvae migrate to the head. The larvae develop by feeding on the hemolymph, muscle tissue, and nervous tissue in the head. Eventually, the larvae completely devour the ant’s brain, causing it to do nothing but wander aimlessly for approximately two weeks. After about two to four weeks, they cause the ant’s head to fall off by releasing an enzyme that dissolves the membrane attaching the ant’s head to its body. The fly pupates in the detached head capsule. 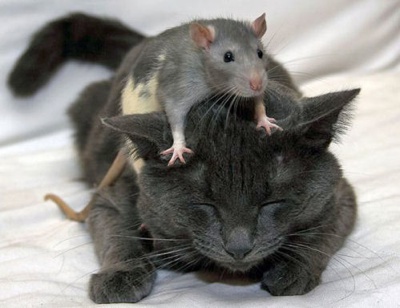 Toxoplasma gondii is a common parasite the definitive host of which is the cat, but the parasite can be carried by all known mammals including humans. T. gondii infections have the ability to change the behavior of rats and mice, making them drawn to rather than fearful of the scent of cats. This effect is advantageous to the parasite, which will be able to sexually reproduce if its host is eaten by a cat. The infection is almost surgical in its precision, as it does not affect a rat’s other fears such as the fear of open spaces or of unfamiliar smelling food. 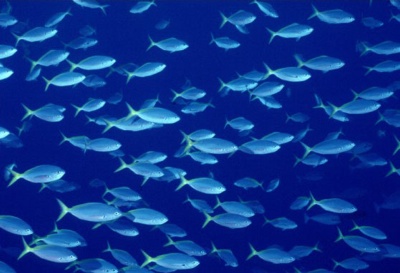 This parasite lives in the gut of shorebirds and produces eggs that are released in the bird’s stool which are spread into the salt-water marshes and ponds of southern California. Some of these eggs get swallowed up by snails and hatch into larva. Once these larvae are mature enough they leave the snail and swim out into the marshes eventually finding a killifish, entering through the gills and making its way along a nerve and into the brain cavity. Once in the brain cavity the parasite will cause the fish to come to the surface, swim in circles, jerk around and display its silvery underside in an attempt to attract a bird’s attention. This behavior makes the infected fish 30 times more likely to be caught and consumed by a bird. Once the fish is consumed, the parasite lives in the bird’s gut and the process can begin anew.

When a female jewel wasp is ready to lay its egg it finds a cockroach and administers two stings. The first sting is to the roach’s thorax temporarily paralyzing its front legs. The second sting is directly to the roach’s brain. This sting causes the roach to lose its escape reflex. Without its escape reflex the wasp, who is much too small to carry the cockroach, can grab one of the cockroach’s antennae and lead it around like a dog on a leash. The wasp takes her new pet back to her nest, lays an egg on its belly and seals it inside. Eventually the larva will hatch and consume the still living roach, which happily lies there until it dies.

This worm’s larva develops and grows inside orthopteran insects (grasshoppers, crickets, etc.). As it grows the worm will consume the internal organs of its host until there is nothing left but the head, legs and outer shell. Once the parasite is grown (usually 3-4 times larger than its host), it manipulates its host to actually seek out and dive into a large body of water. Once in the water the worm emerges and swims away to live out the rest of its life, leaving the host to drown. 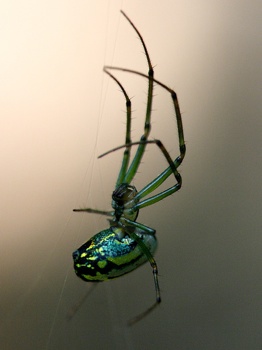 Hymenoepimecis argyraphaga is a Costa Rican parasitoid wasp whose host is the spider Plesiometa argyra. The adult female wasp temporarily paralyzes the spider and lays an egg on its abdomen. The egg hatches into a larva which sucks the spider’s blood through small holes, while the spider goes on about its normal web building and insect catching behavior for the next one to two weeks. When the larva is ready to pupate, it injects a chemical into the spider, causing it to build a web whose design is completely different from any it has ever made, and then to sit motionless in the middle of this web. Even if the larva is removed prior to the web-building process, the spider still engages in aberrant web-spinning. The wasp larva then molts, kills the spider with a poison and sucks its body dry before discarding it and building a cocoon that hangs from the middle of the web the spider has just built. The larva pupates inside the cocoon, and then emerges to mate and begin the cycle over again.

C. unilateralis is a species of entomopathogenic fungus that infects and alters the behavior of ants in order to ensure the widespread distribution of its spores. The spores enter the body of the insect through its spiracles, where they begin to consume the non-vital soft tissues. When the fungus is ready to spore, its mycelia enter the ant’s brain and change how it perceives pheromones, causing the insect to climb to the top of a plant and use its mandibles to secure itself to the stem. The fungus then kills the ant, and the fruiting bodies of C. unilateralis grow from its head and explode, releasing the spores.

Glyptapanteles is a genus of parasitoid wasps found in Central and North America. A female Glyptapanteles will lay her eggs (about 80 at a time) inside a young caterpillar host. After hatching the larvae will feed on the caterpillar’s succulent juicy insides until they are fully developed. They then emerge from the body, attach themselves to a branch or leaf, and form a cocoon. However, one or two larvae remain behind and manipulate the caterpillar to take up position near the cocoons, arch its back, and cease to move or feed. However, when the cocoons are disturbed, the caterpillar will thrash around violently. The pupae effectively have themselves a zombie-caterpillar bodyguard. The caterpillar remains this way until the cocoons hatch at which point it dies.

D. dendriticum spends its adult life inside the liver of its host. After mating, the eggs are excreted in the feces. The first intermediate host, the terrestrial snail, eats the feces, and becomes infected by the larval parasites. The larvae (or cercariae) drill through the wall of the gut and settle in its digestive tract, where they develop into a juvenile stage. The snail tries to defend itself by walling the parasites off in cysts, which it then excretes and leaves behind in the grass. The second intermediate host, an ant, uses the trail of slime as a source of moisture. The ant then swallows a cyst loaded with hundreds of juvenile lancet flukes. The parasites enter the gut and then drift through its body. Most of the cercariae encyst in the haemocoel of the ant and mature into metacercariae, but one moves to the sub-esophageal ganglion (a cluster of nerve cells underneath the esophagus). There, the fluke takes control of the ant’s actions by manipulating these nerves. As evening approaches and the air cools, the infested ant is drawn away from other members of the colony and upward to the top of a blade of grass. Once there, it clamps its mandibles onto the top of the blade and stays there until dawn. Afterward, it goes back to its normal activity at the ant colony. If the host ant were to be subjected to the heat of the direct sun, it would die along with the parasite. Night after night, the ant goes back to the top of a blade of grass until a grazing animal comes along and eats the blade, ingesting the ant along with it, thus putting lancet flukes back inside their preferred host. 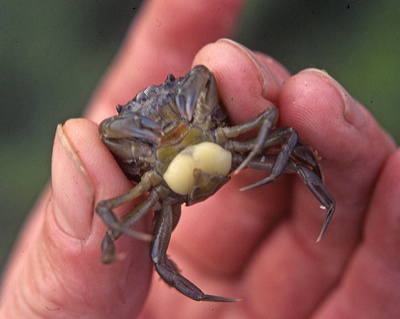 Sacculina is a genus of barnacles that parasitize crabs. Upon finding a host crab, the female Sacculina larva walks on it until it finds a joint. It then molts, injecting its soft body into the crab while its shell falls off. The Sacculina grows in the crab, emerging as a sac on the underside of the crab’s rear thorax, where the crab’s eggs would be incubated. When a female Sacculina is implanted in a male crab it will interfere with the crab’s hormonal balance. This sterilizes it and changes the bodily layout of the crab to resemble that of a female crab by widening and flattening its abdomen, among other things. The female Sacculina has even been known to cause the male crabs to perform mating gestures typical of female crabs. The male Sacculina looks for a female Sacculina adult on the underside of a crab. He then enters and fertilizes her eggs. The crab (male or female) then cares for the eggs as if they were its own, having been rendered infertile by the parasite. The natural hatching process of a crab consists of the female finding a high rock and grooming its brood pouch on its abdomen and releasing the fertilized eggs in the water through a bobbing motion. The female crab stirs the water with her claw to aid the flow of the water. When the hatching parasite eggs of the Sacculina are ready to emerge from the brood pouch of Sacculina, the crab performs a similar process. The crab shoots them out through pulses creating a large cloud of parasites. The crab then uses the familiar technique of stirring the water to aid in flow.

Leucochloridium Paradoxum is a parasitic flatworm that uses gastropods (snails and slugs) as an intermediate host. The worm in its larval stage, travels into the digestive system of a snail to develop into the next stage, sporocyst. The sporocyst grows into long tubes to form swollen “broodsacs” filled with tens to hundreds of larvae. These broodsacs invade the snail’s tentacle (preferring the middle, when available), causing a brilliant transformation, of the tentacles, into a swollen, pulsating, colorful display that mimics the appearance of a caterpillar or grub. The infection of the tentacles of the eyes seems to inhibit the perception of light intensity. Whereas uninfected snails seek dark areas to prevent predation, infected snails are more likely to become exposed to predators such as birds. The resulting behavior of the flatworm is a case of aggressive mimicry, where the parasite vaguely resembles the food of the host. This gains the parasite entry into the host’s body; this is unlike most other cases of aggressive mimicry, in which only a part of the host resembles the target’s prey and the mimic itself then eats the duped animal.