Comedy seems to work best when done in groups. This is not just true of older comedy routines – most modern television comedy hits are such due to the supporting actors. For example, Will and Grace would never have survived were it not for the character of Karen Walker. This list looks at ten of the most prolific and most well known comedy teams. It is perhaps a little light on the British comedy duos such as the Goons – but do feel free to name them all in the comments. 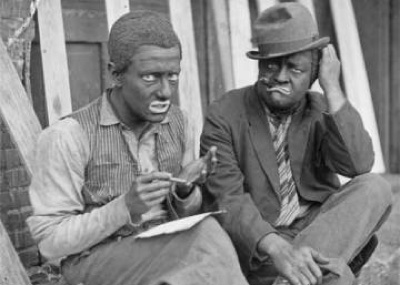 Voiced by Freeman Gosden and Charles Correll, performing on the radio from 1928 all the way 1960. This sketch comedy act was based on turn of the century black minstrel acts, and the two voice artists depicted black people as poor, lower class menial workers, who eventually move from Georgia to Chicago and become taxi drivers.

At least once, in 1931, when the Pittsburgh Courier took up the article of a black preacher who considered the show racially offensive (since the two voice artists were white). They tried to get a million names on a petition, in order to get the show canceled, but few people would sign it, not out of racial fear as much as out of enjoyment of the show. The black leads are always shown to be very simple-minded, but very polite and good-natured, and smarter than the average white man. They also thrived on malaprops, which are incorrect uses of a language. One of George “Kingfish” Stevens’s (played by Gosden) best such lines is, “Heck, naw, I ain’t gawn let my kids use no ‘cyclopedia! They kin walk to school like I did!”

This was subsequently blamed on Yogi Berra, who, never to be outdone, said, “I didn’t say half the stuff I said.” 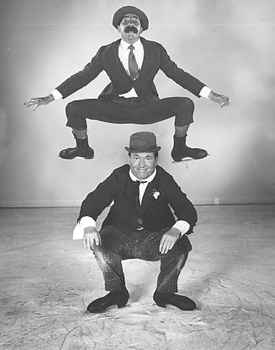 Werner Groebli and Hans Mauch, respectively. They were comedic figure skaters, both from Basel, Switzerland, and performed all over the world in lederhosen and traditional German “Oktoberfest” garb.

They performed in a few films, beginning with Lady, Let’s Dance, in 1944. They never performed in the Olympics, but a lot of Olympic figure skaters think they would have been shoe-ins for gold medals.

“Frick and Frack” has become a household phrase in English, due to their popularity from the 1930s to the 1950s. Some of the stunts they performed defy belief, most notably Frack’s rubber legs, which were twisting, collapsing legs while skating in a spread-eagle.

Frick’s signature move was a cantilever spread-eagle, which he invented. 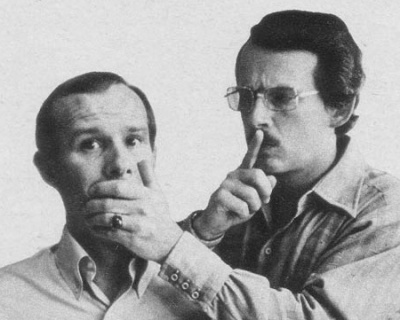 Tommy Smothers always plays the slower buffoon to Dick Smothers’s straight man. Tommy’s signature line was “Mom always liked you best!” after which they would argue over whether that were true or not. When their mother died, they never performed this routine again.

They are accomplished guitar players, and Tommy is a master of the yo-yo. They have the distinction of being the longest-lived comedy team in American history, having performed for about 52 years.

During the late 1960s, they had their own show, “The Smothers Brothers Comedy Hour,” which was extremely controversial (and funny) because of their peace advocacy. They regularly poked fun at the Vietnam War, President Nixon, and racism. The show lasted an amazing 2 years, 1967 to 1969, before being canceled for what CBS was forced to call “Anti-American Peace Propaganda.” Ah, the ’60s. 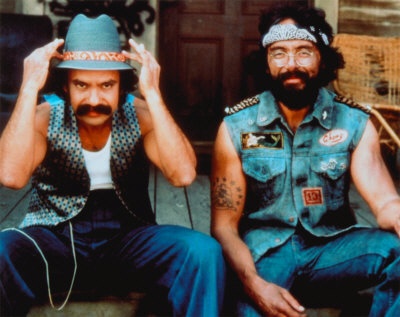 The hippies and counter-culturalists found their idols in the weed-smoking surrealists Cheech Marin and Tommy Chong. They broke up in 1985, but reunited in 2008 much to everyone’s delight.

They made a number of films from 1978 through the 1980s, all having heavily to do with drug use, the free love of hippies, etc. Arguably their best work is the 1983 film Still Smokin’, in which they travel to Amsterdam, Netherlands, for a film festival about Burt Reynolds and Dolly Parton. When the latter two stars don’t show up, Cheech and Chong save the day with their own live stage performance. One of the best bits is Chong as “the old man in the park,” and the duo as “Ralph and Herbie the dogs.” 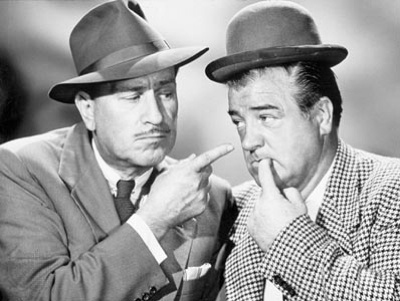 Bud Abbott played the straight man to Lou Costello, and even if they had only done one routine during their entire career, “Who’s on First?” would net them the #6 spot. They had already rehearsed it to perfection, but had not had a chance to perform it on stage.

The first televised performance of it was at the Steel Pier, in Atlantic City, New Jersey. They had a few sheets of material written by someone else, and they didn’t think much of it, so Abbot asked Costello, “You wanna do Baseball?” “Yeah, let’s do it.” And they walked out and made history.

It had been many times since before the radio days of burlesque vaudeville, with the simple gag of Who and What being proper nouns. Abbott and Costello were the first to hone it into its modern form of a baseball team’s names. They copyrighted it, and performed it several times in different films. None of this mentions the host of other outstanding performances to their credit. 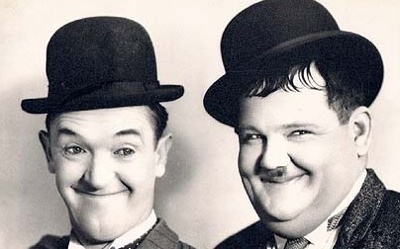 Well known to film buffs today as a duo of true friends. They were vaudevillians, in countless silent films together and separate, before teaming up in 1927, and remained together until Hardy’s death in 1957, appearing in a lot of films. By the 1950s, their healths were declining rapidly, and they no longer looked like their old selves.

They were masters of slapstick, and an interesting idea that Laurel called “white magic.” A good example is in the film Way Out West, from 1937, one of their most famous, in which Laurel (the thin one) makes a fist, pours tobacco into it, flicks up his thumb and lights it, then blows real smoke out of his fist. Hardy proceeds to try duplicating it throughout the film, getting it right at the end, and freaking out about burning his thumb. They also have a famous soft-shoe dance number in this film. 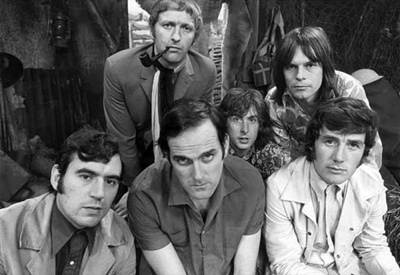 Britain’s, arguably the world’s, most irreverent comedy team so far, appearing on stage and in films from the late 1960s through the 1980s. Their films are still extremely popular, and very funny, the most famous of which is probably Monty Python and the Holy Grail. In it, King Arthur and his knights of Camelot, who eat ham and jam and spam a lot, traipse all over the English countryside looking for the Holy Grail, encountering a particularly tough Black Knight, a riddle-posing bridge guard, and God Himself. They have no horses, but at least they have coconuts to sound like horses, which a Cockney castle wall guard reminds them are not quite the same as horses. The conversation goes downhill thence.

Their stage work is comparatively unheralded in America, but you can find a lot of it on YouTube. It is some of their very finest work. This lister’s favorite is a bit involving a man who’s just lost his mother, trying to get a mortician to bury her. The mortician replies that the mortuary can cook her or bury her, or dump in her the Thames. In finally ends with the mortician saying that he’ll cook her, the son can eat her, and then they’ll dig a grave and he can throw up in it. 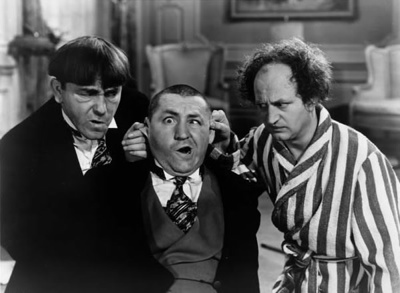 The most well known artists of slapstick in history were Moe and Curly Howard, and Larry Fine. Curly died of a stroke in 1952, and several people were chosen as replacements for a few more years, but it was never quite as good without him.

Moe was the straight man, Curly the comedian, and Larry was something of both. Some of their gags are as physically demanding and dangerous as stunts you might see in a Looney Tunes cartoon. Curly or Larry would accidentally smack Moe in the head with something made of metal, and he would respond angrily, sometimes running a ripsaw over their heads, or smacking them with hammers.

Their slap gags are always uproarious, and one of their most famous moments comes in the short Micro-phonies, from 1945, in which they lip-synch to the Sextet from Lucia di Lammermoor. 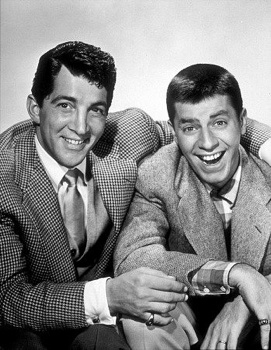 Martin was the straight man to Lewis’s utmost in zaniness. From 1946 to 1956, they were the pinnacle of the comedy world in Hollywood, performing around the country and in films. Martin was one of the finest crooners in history, but Lewis could belt out a song when he wanted. They could do it all, sing, dance, slapstick, vaudeville jokes, stand-up, and outstanding ad-lib segments. Their patented sketch was a Martin crooner, into which Lewis would walk with a silly face, and continue to interrupt him while he sang. 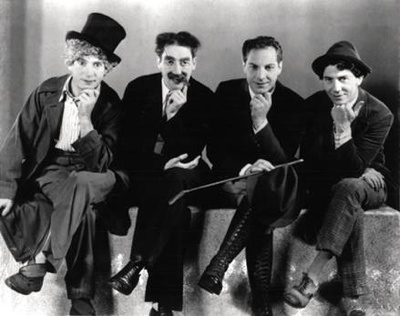 Modern comedians of all kinds, stand-up, sitcom, sketch, film and stage, look on the Marx Brothers with awe at how brilliant they were at every aspect of comedy. They grew as vaudeville performers, and although they couldn’t tapdance, they could certainly do everything else, and this lister means EVERYTHING.

Harpo played the harp better than most professionals, and he taught himself by ear. His form was all wrong, but professionals came to him for instruction on how to play like him.

Groucho was a fine singer, and usually sent himself up as a horrible singer.

Chico could play the piano effortlessly, and was loved for his “shooting the keys” manner of playing, seen in A Night at the Opera, among others.

Groucho’s one-liners and insults run throughout all their films and are still the stuff of legend. His greasepaint eyebrows and mustache are part of the classic Halloween, or gag glasses, with huge nose, that kids like to wear, or cartoons use to hide identities.

Harpo’s voice was a rich baritone, and too low for his clownish persona, so he elected never to speak, except a few times at ceremonies, and on a talk show in the 1970s. This was one of his finest jokes, since he was begged to finally say something, and once he got going, the talk show host could not shut him up for a good 15 minutes.

Chico’s name should be pronounced “Chick-O” not “Cheek-O,” because he was the brother all the chicks were after (according to him). He was also a gamblaholic, and they made some of their films just to pay off his debts.

According to the late, great George Carlin, Groucho Marx told by far the funniest “Aristocrats” joke in history. It’s a notoriously dirty joke told from the turn of the century, by comedians who ad-lib the nastiest filth they can think of, and then end with the stupid punch-line “The Aristocrats!” Groucho didn’t care for dirty jokes, preferring clean jokes, in which more art is required to get a laugh. When asked about his version of it, he replied, “Well, bestiality’s not all that dirty.”

Their performances in A Night at the Opera and Duck Soup are their finest efforts. The former includes the famous stateroom scene, the complete destruction of a production of Verdi’s Il Trovatore, and “The First Party of the First Part” sequence between Groucho and Chico.

The latter includes their legendary mirror scene, the lemonade stand, their combat spoof (Groucho wears an American Civil War hat, then a coonskin cap, then a Napoleon hat, etc.) and their parody of Paul Revere’s Ride.

They used a running joke throughout their films involving their meager accommodations growing up. Whenever they spot food in a film, they dash madly around the set, getting to the table, where they devour everything in sight, even their clothing.