Many iconic photos have been faked to promote an ideological agenda, manipulate the emotions of the viewer or ‘tailor’ reality to meet the needs of the story. There are many methods for creating “fauxtographs” (misleading captions, forced perspective, etc.), but this list sticks to a sampling of 10 digitally/manually manipulated photos presented to, and by, the mass media as real. These, and scores of other fauxtography stories, can be found at StinkyJournalism. They are hilarious and definitely worth your time. You can read the first list of fauxtos here. 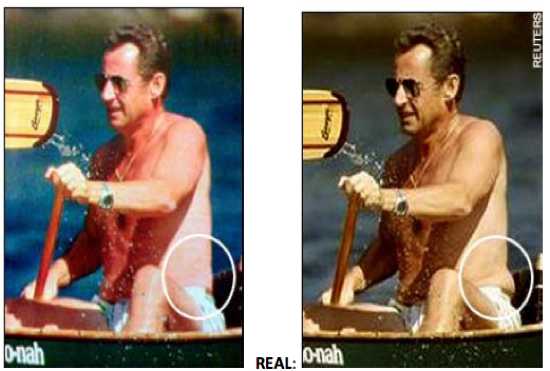 Now this is Power. Paris Match is a celebrity magazine accused of airbrushing French President Nikolas Sarkozy’s love handles away. If only it were that easy (sigh). You may remember, Sarkozy was implicated as the person responsible for the firing of a Paris Match editor after the magazine published a photo of Sarkozy’s wife and a suspected lover. These photos reveal that since then, President Sarkozy may be receiving preferential treatment because of his connections to powerful businessmen, like media mogul Arnoud Lagardere– owner of Paris Match. [Source]

This one is almost too close to call, but merits discussion because it matches the article copy so closely. In TIME magazine’s 2008 piece “Why is Steve Jobs skipping MacWorld?” they commented on the Apple CEO’s gaunt appearance, stemming from his battle with pancreatic cancer. And while Jobs did look thin, he didn’t look that thin. Or that tall. Mac Daily News then publicly accused TIME of squeezing the photo’s XY axis to make Jobs look sicker than he actually was. TIME disagreed, and attributed the error to incorrect pre-set height and width ratios for their website. TIME published the original photo with the proper XY axis a day later. [Source] 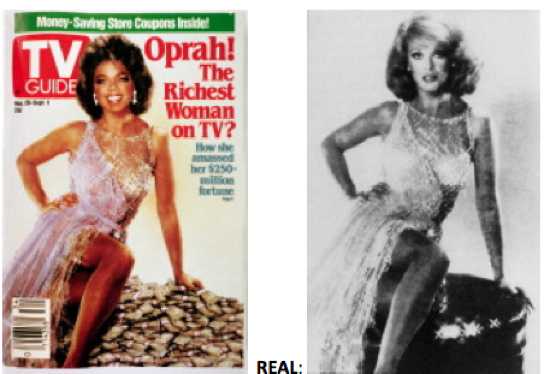 Oprah Winfrey is a syndicated talk show host and one of the worlds richest African American women. She came from humble beginnings, is very charitable to the poor and has always been… ‘a healthy woman of size’. So what possessed TV Guide to Photoshop her head onto a 1979 publicity photo of white actress Ann-Margret? (The original is in color). When shown the photo, Winfrey said she’d never have the guts to pose in a dress that revealing. TV Guide later admitted to using the photos without the permission of either woman, and warned its graphic artist to not be ‘so literal’ in the future. [Source] 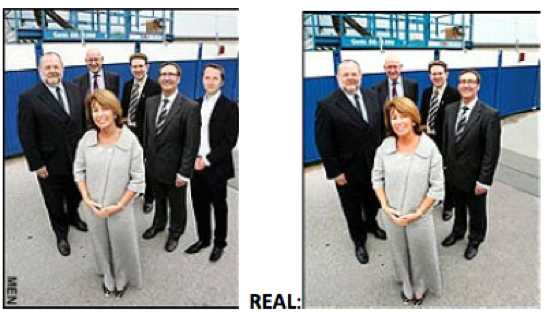 UK Culture Secretary, James Purnell, made a name for himself by leading attacks on rigged BBC phone-in competitions. But when he was not present for a photo-op at the Thameside hospital, he told organizers to doctor the picture with fellow MPs to make it look like he’d been there. In fact, the other MPs stood off to the side so there would be room to digitally add him into the photo. When the story broke, the media outcry was immediate, and led Jeremy Hunt to ask “How can broadcasters be expected to clean up their act if the secretary of state is telling people to doctor photographs?” Purnell survived the row, but stepped down from his Parliament seat in February 2010. [Source] 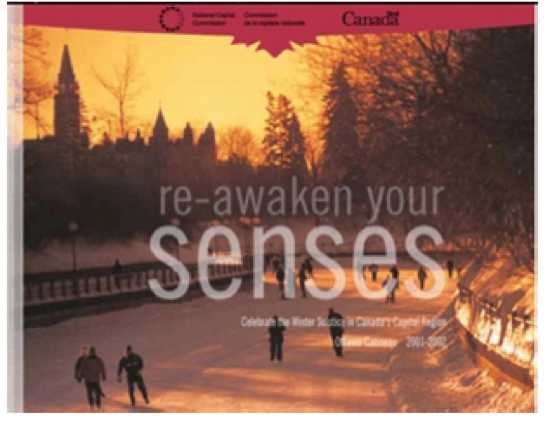 The Media Awareness Network (MNET) is a program for teachers and parents in Canada to “promote critical thinking in young people about the media.” But critical thinking was in short supply when MNET sourced a fake photo for its 2001 brochure. The cover photo combined multiple shots to present a beautiful (fake – above) view “from Parliament Hill on one end of the Rideau Canal, including a view of the world’s longest skating rink”. That wouldn’t have been so bad, but in the ‘About Us’ section, MNET really lays it on thick; saying “The idea behind our work is “based on the belief that to be functionally literate in the world today – (we must) be able to ‘read’ the messages that inform, entertain and sell to us daily.” Those messages presumably include marketing materials for education programs. MNET later explained that the issue wasn’t that they had sourced a fake photo, but rather that they had presented the image as a real Ottawa scene. MNET now uses the affair as a “teaching moment”, and probably has a good laugh about it. [Source] 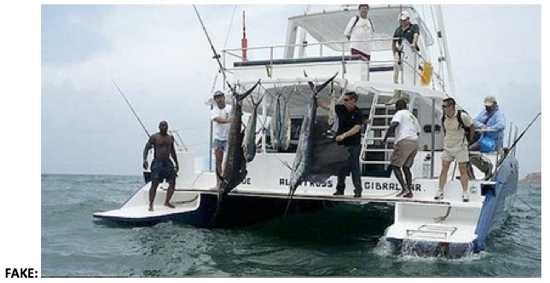 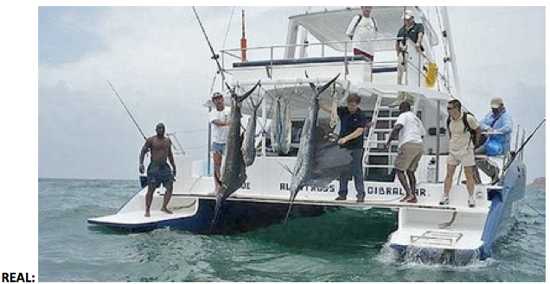 Saiz is pictured in the center, holding the fish, so obviously his identity must be concealed. You’re probably ahead of me here: put someone else’s head on Saiz’ head. But the graphic ‘artist’ replaced Saiz’ head with the head of an agent in the same photo. The resulting ‘exonerating evidence’ showed the same man in two places at the same time. Needless to say, the fake failed the laugh test, and Saiz was sacked. [Source]

4
A Missile Too Many

In July 2008, Iran conducted a controversial missile test to project its (alleged) military might, but they got a little more controversy than they bargained for. Newspapers around the world published an image of four Iranian missiles launching skyward, but the image was quickly discovered to be a fake. The smoke and clone flaw reared its truthful head again. Somehow, despite the Adnan Hajj controversy just two years earlier, this photo got past the editors of the Los Angeles Times, the Financial Times and the Chicago Tribune. Many websites and newscasts also fell for the fake (BBC News, MSNBC, Yahoo! News, NYTimes.com), and had to retract the story. [Source]

Charles Johnson is the owner/editor of Little Green Footballs, the website that exposed the fake National Guard memos that brought down Dan Rather at CBS, and debunked the Adnan Hajj photos that gave rise to the term “fauxtography”. The LGF website has been invaluable in exposing the lazy, staged propaganda that passes for photojournalism in the embattled Middle East and some parts of the Arab world.

Johnson has recently switched his center-right politics sharply left, in part because he believes many of his peers have embraced bigoted groups as allies against militant Islam. So the irony meter got buried into the hot squishy center of the planet when Little Green Footballs published a photo showing Vlaams Belang’s Filip Dewinter with Pro-Köln’s Markus Beisicht in front of what appears to be a neo-Nazi demonstration. But the banners are actually from Antifa, Antifascistische Aktion, a violent Leftist group.

The master had been duped. The real photo was taken on the roof of the Flemish Parliament in Brussels. Johnson now claims he can’t tell which picture is the original, and maintains that it doesn’t matter if the photo was faked. This is essentially saying that photo is ‘fake but accurate’, which was the same argument Dan Rather used to defend the fake National Guard memos. [Source]

Honduran newspaper La Prensa was accused of whitewashing political violence during anti-coup demonstrations on July 6, 2009. The photograph in question is of Isis Obed Murillo (deceased), being carried by friends after being shot by gunmen in Tegucigalpa. LaPrensa is famously pro-coup, and obviously airbrushed Murillo’s injuries out of the photo. The newspaper’s published explanation blamed unspecified “processing errors”, but bloggers were having none of it. Matthew Dubuque asks “What kind of random ‘process’ would ‘accidentally’ whitewash BOTH the blood on the ground AND the blood on his face while leaving ALL the rest of the photo intact?” [Source] 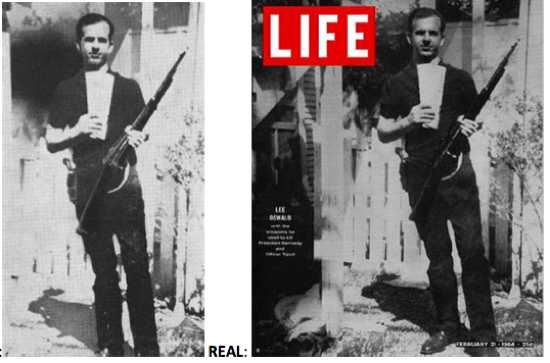 In February, 1964, LIFE Magazine and the Detroit Free Press vied to be first to market with a photo of Lee Harvey Oswald holding a rifle that might have been the murder weapon. The infamous “back yard photo” appeared in the Free Press and LIFE, but were different: the Free Press photo was brighter and had no scope on the rifle, but the LIFE photo was darker and did show a scope on the rifle. These differences led people to believe the photo was a fake, and Oswald himself said the photo superimposed his head on another’s body. Complicating matters is his wife Marie’s statement that she took the photo in the spring of 1963.

Gene Roberts (journalist for the Free Press at the time) said the rush to scoop LIFE led to alterations of the Oswald photo. Roberts told The Education Forum’s Adam Wilkinson that “We wanted to beat them (LIFE) to the punch.” He continued, “In the haste to get the photos in the paper, an airbrusher covered the sniper scope … with liquid chalk.” Due to limitations of print publishing at the time, this was an accepted technique to heighten contrast between dark and grey areas. [Source]