This is a list recognizing the ten greatest talking donkeys from books, movies and television. Some of the donkeys on this list are special because they were never expected to talk (like any normal donkey), and it is either magical or miraculous that they did. Others simply live in a world where all animals can talk, and they are noteworthy for other reasons. At all events, the two things each entry has in common are they all talk, and they all are donkeys. So with that, here are your top ten: 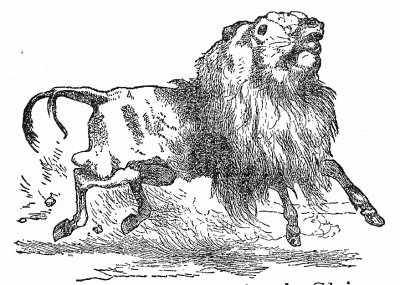 The Ass in the Lion’s Skin is a fable attributed to the Greek slave, Aesop (famous also for the Tortoise and the Hare, the Ant and the Grasshopper, etc). The story is about an ass that dresses in the skin of a lion so that he can go around scaring the other animals. His trick works until he tries to talk to a fox, who, upon hearing him bray (he doesn’t say anything specific) instantly realizes that he’s not a lion but, in fact, an ass dressed in lion’s skin. The moral of the story is that you can never tell a fool by the way they dress, but you always can tell once they open their mouth. So true!

The donkey in the fable was directly alluded to, and given much more of a voice, in the book “The Last Battle,” the seventh and final book of C. S. Lewis’ The Chronicles of Narnia, which features the talking donkey, Puzzle. Puzzle is noted for being courageous and humble, but also very naïve. He is tricked by his friend, Shift the Ape, into retrieving a lion’s skin from the frigid Caldron Pool, dressing himself in it, and then using it as a disguise for Aslan the Lion, in a ploy to gain control over Narnia. This pretense is eventually betrayed by Shift himself, but in the end Puzzle is pardoned by the real Aslan. 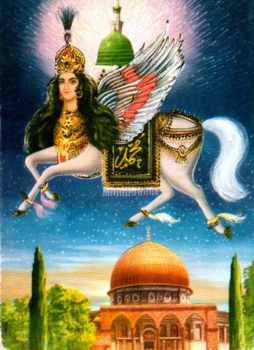 From the book The Beginning and the End comes an interesting story called “The Conversation of the Donkey.” In it, Muhammad receives from God a gift of four sheep, four goats, ten pots of gold and silver and a black donkey that can talk. The ensuing “conversation” between Muhammad and the donkey goes something like this:

Muhammad addresses the donkey asking, “What is your name?” “Yazid Ibn Shihab,” the donkey answers. Then Muhammad says to him, “I will call you Ya’foor!” Then Ya’foor replies, “I obey.” Muhammad then asks, “Do you desire females?” To which the donkey replies, “NO!”

Interesting, to say the least. Due to the difficulty in finding an image of Ya’foor, pictured above is the donkey Buraq, another donkey closely related to the tales of Muhammad. 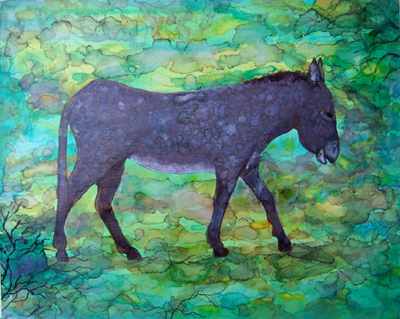 Animal Farm (1945), by George Orwell, is an allegorical novella about a group of farm animals (mostly pigs) meant to symbolize Soviet politics. In other words, it’s one fairly boring topic allegorizing another. Nevertheless, it has its place in history and, supposedly (I admit I’ve never read it), there’s a talking donkey named Benjamin. The following is from the Cliffs Notes character description of him:

“Donkeys are known for their stubbornness, and Benjamin stubbornly refuses to become enthusiastic about the rebellion. While all of his comrades delight in the prospect of a new, animal-governed world, Benjamin only remarks, ‘Donkeys live a long time. None of you has ever seen a dead donkey.’ While this reply puzzles the animals, the reader understands Benjamin’s cynical yet not-unfounded point: In the initial moments of the rebellion, Animal Farm may seem a paradise, but in time it may come to be another form of the same tyranny at which they rebelled. Of course, Benjamin is proven right. Although pessimistic, he is a realist.” [Image Source] 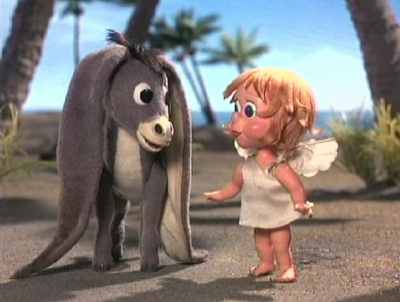 For anyone who hasn’t seen this show, it’s basically a mash-up of Dumbo and Rudolph the Red-Nosed Reindeer, and it is worth checking out for sure. Nestor is a gray, stop-motion donkey with freakishly long ears who is rejected by all the other donkeys. After his mother is killed (okay, there’s a little Bambi in there too) he wanders to Israel and finds Joseph and Mary, whom he helps travel to Bethlehem where Baby Jesus is born.

Like the classic holiday hit A Charlie Brown Christmas, this movie seems to strike the perfect balance between secular and spiritual. And there’s plenty of talking donkeys to get your fix. The narrator of the story is a talking donkey named Spieltoe, and is mildly amusing. “You never knew Santa Claus had a donkey?’ he asks with a drawl, “who do you think pulls his snow plow?” 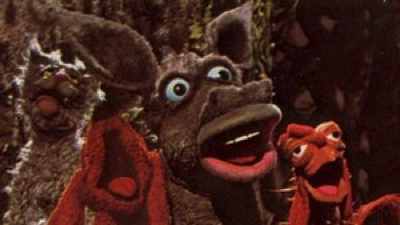 From the movie The Muppet Musicians of Bremen, Leroy is a talking donkey who, more impressively, plays the tuba. The movie is an adaptation of the German folktale, The Town Musicians of Bremen, first recorded by the Brothers Grimm. The Muppet version is set in the rural bayou of Louisiana, and the music is New Orleans-style jazz. Leroy is the first protagonist introduced but is later joined by Rover Joe, the hound dog (who plays the trombone), Catgut the cat (the trumpet) and T.R. the rooster (vocals and tambourine), with various rats and Kermit the Frog serving as MC. Together the animals escape their abusive, criminal owners and embark on a quest for freedom as a traveling band. This show alone is enough to demonstrate Jim Henson’s unique and enduring genius, as both a craftsman and a storyteller, and in no small part due to Leroy the Donkey. 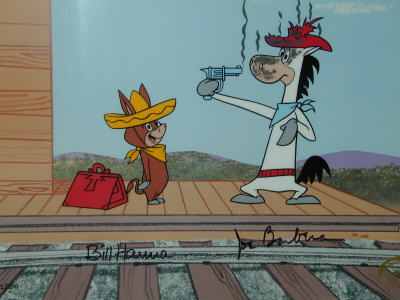 But in all seriousness, Baba Looey really was the archetypal sidekick. Loyal and resourceful, he rescued Quick Draw when in trouble, provided valuable advice and information, and was always there to pull Quick Draw’s head out of the clouds. In that regard, he was a very close reincarnation of the Miguel de Cervantes character, Sancho Panza, who actually rode a donkey in the Spanish masterpiece Don Quixote de la Mancha. 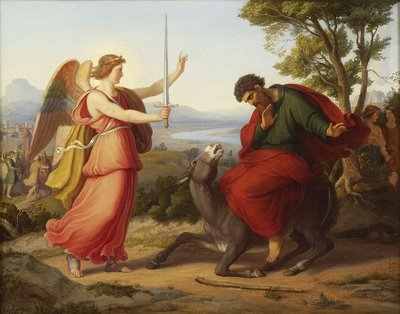 This one is just plain awkward. Unlike the tale of Muhammad’s talking donkey which is obscure at best, the Judeo-Christian version, amazingly, is right there in the scriptures. In fact, on a Listverse top ten of the most bizarre biblical tales, it was weird enough to reach #2.

To recap, the prophet Balaam and his donkey are traveling together when the donkey sees an angel and refuses to walk any further. Frustrated, Balaam begins to beat the animal until it speaks, asking “What have I done to thee? Why strikest thou me, lo, now this third time?” [Source]

Balaam then says, “Because thou hast deserved it, and hast served me ill: I would I had a sword that I might kill thee.” At about this point Balaam finally sees the angel and falls down on the ground. Then the angel says to Balaam, “Why beatest thou thy ass these three times? I am come to withstand thee, because thy way is perverse, and contrary to me[.]” (On this one I would like to invoke the Fox News slogan: “We Report. You Decide.”) 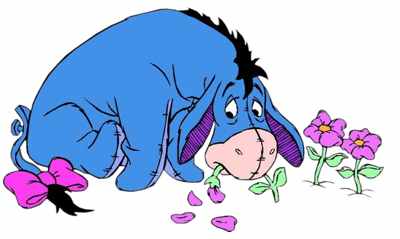 Originally created by the British author A.A. Milne for the Winnie-the-Pooh books, Eeyore has reappeared in several Disney movies and television shows and has achieved the greatest popularity, by far, of all the characters in the series. As a quick demonstration, consider that, at the time this list was composed, Eeyore had over 241,000 fans on Facebook—92,000 more than compatriot Tigger and 85,500 more than the Pooh Bear himself. (Piglet, Rabbit, Owl and Christopher Robin don’t even come close to approaching these figures, not even combined.) Maybe all those fans can do something to help Eeyore overcome all his mental and emotional problems.

Now, I understand that his severely despondent attitude is, in part, to counterbalance the other characters, much like Oscar the Grouch or the Raincloud Care Bear, but Eeyore takes it way too far. He has dangerously low self-esteem and zero self-worth. In fact I dare anybody to read the following passage (credit to overthinkingit.com) and tell me it’s not a little disturbing:

“You seem so sad, Eeyore.”
“Sad? Why should I be sad? It’s my birthday. The happiest day of the year.”
“Your birthday?” said Pooh in great surprise.
“Of course it is. Can’t you see? Look at all the presents I’ve had.”
He waved a foot from side to side.
“Look at the birthday cake. Candles and pink sugar.”
Pooh looked – first to the right and then to the left.
“Presents?” said Pooh. “Birthday cake?” said Pooh. “Where?”
“Can’t you see them?”
“No,” said Pooh.
“Neither can I,” said Eeyore. “Joke,” he explained. “Ha Ha.” 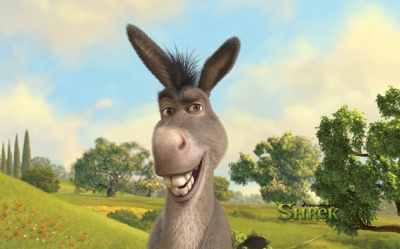 He’s positive, sensitive, talkative, his favorite food is waffles, and he even flew for a brief moment with the help of some pixie dust. Yes, the one and only Donkey from the Shrek tetralogy hardly needs any further explanation. In 2001, Donkey, voiced by veteran Eddie Murphy, and the rest of Shrek gang announced, with a bang, the arrival of DreamWorks Animation as a power player in the computer-animated family film genre. Up until that time this extremely lucrative industry had been dominated, if not monopolized, by the Pixar studio. Yet critics and fans alike hailed Shrek for its fresh jabs at fairytale conventions, hurled openly at Pixar bedfellow Disney, and it was enough for Shrek to win the inaugural Academy Award for Best Animated Feature. 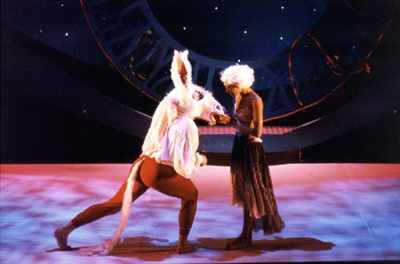 It is impossible to overstate the sheer beauty and brilliance of William Shakespeare’s A Midsummer Night’s Dream, although many have certainly tried. So what’s one more attempt going to hurt, right? It is, simply put, a timeless wonder; a phenomenon that has inspired at least one opera, one ballet and five modern films. And it all starts with Bottom. After all, it’s Bottom who dreams the dream, or as he calls it, the “most rare vision,” and any high school teacher could tell you the most important role in any Shakespeare comedy is the fool.

A resident Athenian and weaver by vocation, Bottom is transformed (or more precisely “translated”) from human being to ass by the “shrewd and knavish sprite” Robin Goodfellow in the first scene of the third act. The rest, well, we all know what happens. But for those who don’t; he has sex with the Queen. In most performances he is given an ass’s head or ears, only, but there are alternative interpretations that hold that he was endowed with a lot more than that. Peter Brook, who directed the epic 1970 Royal Shakespeare Company’s production, apparently shared this view. “Peter used to tell us that the ass has the largest penis in the animal world,” recalls Sarah Kestelman, who played Titania.

Anyway, without going any more into that, or any other textual analyses—of which there are hundreds, and many quite intriguing—suffice it to say that Bottom is a globally beloved ass who gave us the greatest midsummer night in all of literature.

Plus, he’s an ass named Bottom. How could he not be at the top of this list?