With the exception of a few high-end steakhouses and restaurants that serve menu classics, tableside food preparation by confident waiters dressed in white shirts and aprons is becoming a lost and rare art. When my parents used to take me out to a fancy dinner as a child, I used to delight in the pouring, stirring, shaking, cracking and, of course, lighting food on fire right next to the very table we were eating at. Here are 10 menu items that have been made famous by being prepared tableside by your server. 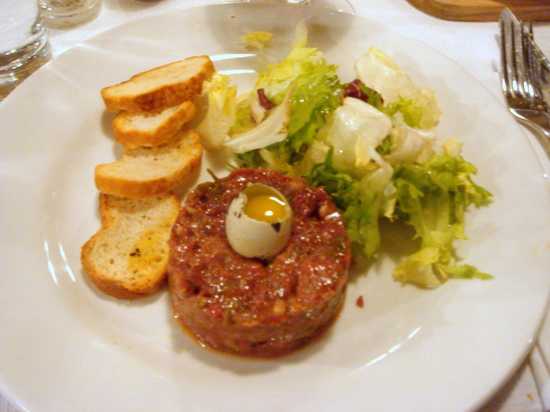 Steak tartare is ground, raw beef.  The meat is chopped or ground in the kitchen but prepared at the table.  It is brought out with sides of onions, capers, pickles, Worcestershire sauce, mustard, olive oil and cayenne pepper and topped with a single raw egg yolk.  The server mixes and folds the yolk into the meat and adds any sides that the guest desires.  The meat is then placed on a bed of lettuce and served with toast.

Some people are concerned about eating raw meat.  It is generally ground from the better cuts of meat in the restaurant in small batches.  This reduces the risk of bacterial infection because there is less meat, and if there is a problem with one piece of meat, the contamination would be limited to that batch.  The restaurant may even trim the surface meat (where the bacteria live) away and use it for other purposes so as to further reduce the risk. 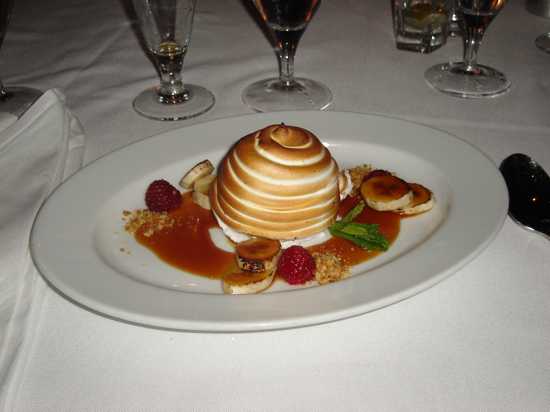 The name Baked Alaska was made up in Delmonico’s Restaurant in New York City, in 1876.  This dessert is made of sponge cake, ice cream, meringue and other ingredients.  The meringue that is piped around the cake and ice cream acts as an insulator as the whole thing is placed in an extremely hot oven just long enough for the meringue to harden and keep the ice cream from melting.  This decadent dessert is traditionally wheeled tableside and set afire by pouring hot liqueur over the top prior to serving. 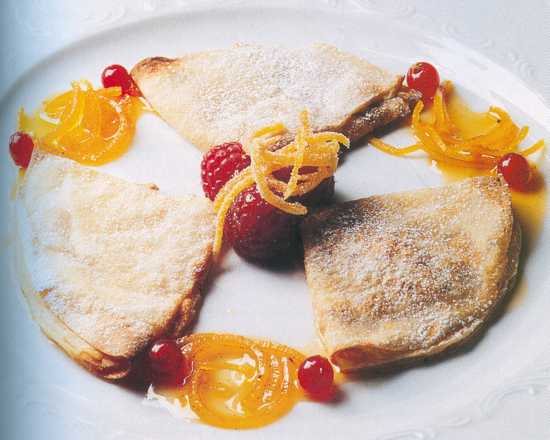 Crepes are, essentially, very thin pancakes.  Crepes are served with a variety of savory or sweet fillings, or with nothing at all, and can be flambéed.  The most common of flambéed crepes prepared tableside is Crepes Suzette, which is prepared with an orange-flavored sauce poured over them.  Apparently this dessert was discovered by accident when a 14-year-old sous chef, named Henri Charpentier, accidentally set his crepe sauce on fire.  He named it after Britain’s future King Edward VII’s daughter, Suzette.  When you flambé a food item, most of the alcohol in the liqueur you’re using burns away but leaves the flavor in the food. Such liqueurs used in Crepes Suzette are Cointreau (orange flavored liqueur) and brandy. 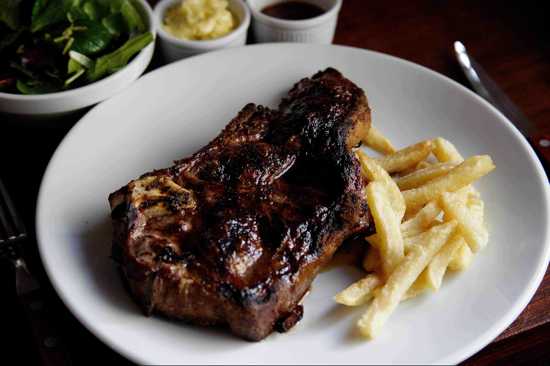 Chateaubriand. The name conjures up thoughts of haute cuisine and luxury.  Chateaubriand is not a cut of meat but a method of preparation.  The dish was named after Francois-Ren de Chateaubriand, the founder of Romanticism in French literature.  Chateaubriand is usually made from a thick cut of the tenderloin, weighs between 10 and 12 ounces, and is intended to serve two.  Most of the cooking of the dish is prepared in the kitchen and the only tableside service consists of the carving of the meat.  It is normally served with béarnaise sauce or a demi-glaze with vegetables and roasted potatoes. 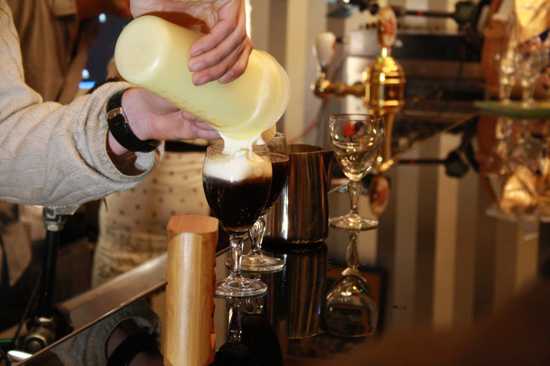 Although technically not a food item, coffee prepared tableside makes for a special end to a fancy dinner, especially if your coffee has something in it to give it a little kick.  Spanish coffee is a popular coffee prepared tableside.  Normally your server will dip the rim of the glass in a little lemon or lime juice and then sugar, rum, brandy and Kahlua are added and lit.  Topped with fresh hot coffee, whipped cream and a cherry, this is a nice change to a traditional dessert. 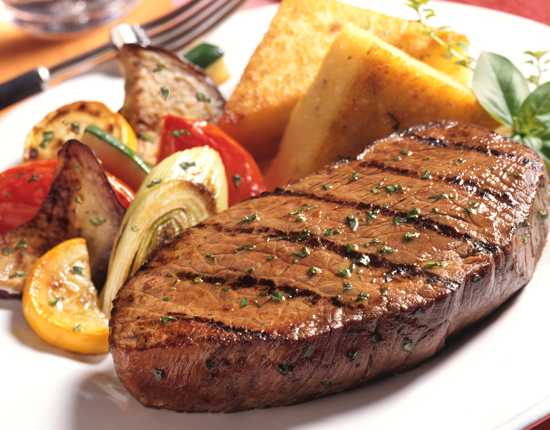 Pepper steak, or steak au poivre, is a French dish that’s made from steak coated with loosely cracked peppercorns.  The coated steak is then pan-fried in butter or oil by your server, in a very hot skillet to form a crust, while the center remains rare or medium rare.  The bits of pepper and steak are scraped from the bottom of the pan, mixed with brandy and set aflame.  Cream is then added and poured over your steak.  This is one of my favorite tableside creations. 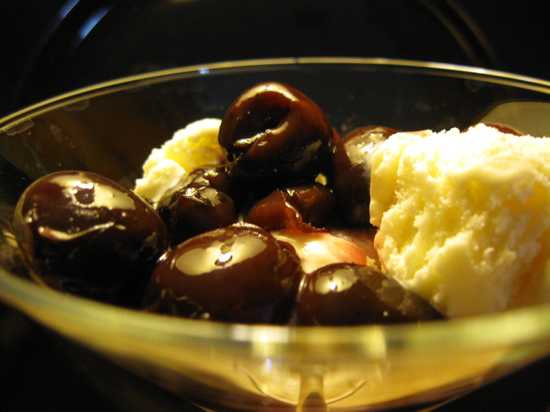 French chef Georges Auguste Escoffier was credited for this flambéed dessert, made for Queen Victoria’s 1887 Jubilee celebration.  Pitted bing cherries are traditionally used, although an easier and less traditional method uses canned cherries.  The cherries are slow-cooked in a caramelized mixture of brown sugar and butter.  Normally Kirsh, a German brandy made from morello cherries, is added and flambéed.  This combination is then poured over vanilla ice cream. 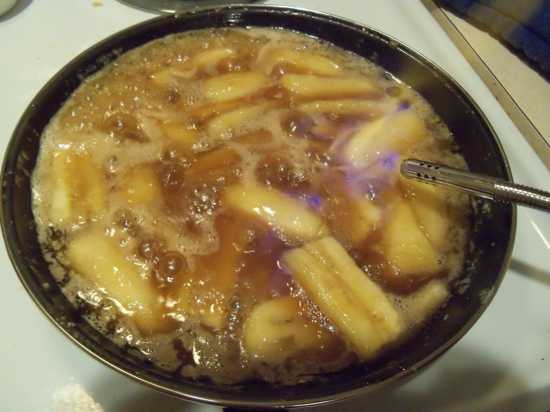 Named after Richard Foster, who was the chairman for the New Orleans Crime Commission, this flambéed dessert was created at Brennan’s restaurant in New Orleans, in 1951.  Thirty-five thousand pounds of bananas are flambéed every year at Brennan’s in preparation for this famous dessert.  With ingredients such as bananas, melted butter, brown sugar, cinnamon, rum and banana liqueur all set aflame and then poured over vanilla ice cream, I can see why it’s so popular. 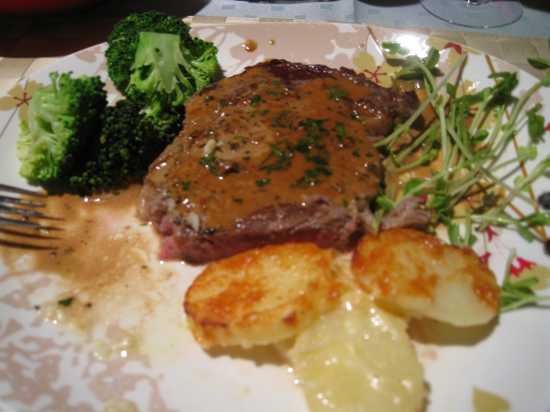 Evidence suggests Steak Diane is an American invention of the late 1950s/early 1960s, when French cooking was very popular.  While Steak au Poivre can be prepared tableside or in the kitchen, Steak Diane is almost always expected to be flambéed at your table. A rich wine sauce and a flamboyant presentation make this dish popular at classic-recipe restaurants.  Steak Diane was originally a way of serving venison, and its sharp sauce was intended to complement the sweet flavor of deer meat.  It was named for Diana, the Roman goddess of the hunt. 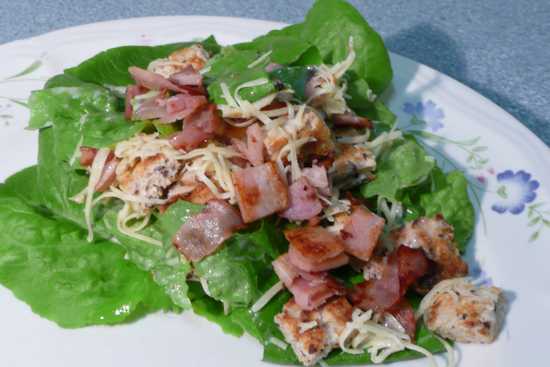 Of all the dishes prepared tableside, Caesar salad is still the most popular.  The popular dish was originally created in 1924, by Italian chef Caesar Cardini at his restaurant in Tijuana, Mexico, and was prepared right at the table.  This salad was probably the first to become a main–course salad.  You might see a lot of Caesar salad recipes that include anchovies.  However, Cardini never included them in his original.  Another interesting fact is that in the late 1990s, Caesar salads were made illegal in California by a new health law banning the sale of any food that used raw eggs as an ingredient.  Presumably, there was a black market for the contraband salad.  The law was soon revised and the situation remedied in 1998.

I have added this as a bonus item as it is only available in one restaurant, but it needed mentioning as it is a good example of how ultra-modern fancy restaurants are putting the concept of tableside food preparation into their menus. This item is featured on Top 10 Unusual Cooking Concepts. Freezing has long been a staple in kitchens and cooking, but it is only recently that it is really coming to the fore – particularly extreme temperature and fast freezing. Liquid Nitrogen is especially useful in making ice cream as the rapid freezing prevents ice crystals from forming – and it is the ice crystals in ice cream that makes for an inferior product. Liquid Nitrogen frozen ice cream is the smoothest silkiest ice cream you will ever eat and it takes only a few minutes to freeze. You can also use this technique to freeze pure fruit juices into sorbets. In the video clip above, one of the waiters from the Fat Duck prepares bacon and egg ice cream at the table. Having eaten at the Fat Duck and eaten this ice-cream, I can assure you it is absolutely delicious.

If you liked this list, you really should check out the food category as there are many more like it.