Rock stars die young. It seems to be part of the job. By contrast, many people think classical composers are old farts with long, grey beards, who write dreary music for even older farts. It does take a while to master the techniques of writing classical music, but even so, many great classical works were written by people in their twenties. Don’t forget, Mozart died at only 35.

This list celebrates 10 composers who didn’t even get the chance to reach 35, let alone grow a long beard, but who still left us music that is remarkable, beautiful or downright stunning.

Jeremiah Clarke is a case of the music being better known than the man himself. To most people his brilliant Prince of Denmark’s March, written for Queen Anne’s husband, will sound familiar. For years it was known as the Trumpet Voluntary and attributed to Henry Purcell. It is played at many weddings (Charles and Diana, among others), which is ironic since Clarke took his own life because of an unhappy love affair. Allegedly (and I wonder how people found this out) he flipped a coin to decide whether he would hang or drown himself. The coin landed on its side in the mud, so he used a gun.

Pergolesi died the ultimate tragic artist’s death (tuberculosis), at the age of just 26. But far from a sad one-day fly, he was a highly successful composer, mainly of trendsetting comic operas. His final work, the Stabat Mater for two voices and orchestra, went on to become the most printed work of the entire 18th century. It’s a sad and beautiful piece, based on a poem that describes the Virgin Mary’s sorrows during the Crucifixion. The sound of a male alto (only one of the singers in the clip above is a woman) may be strange to modern ears, but remember that in Pergolesi’s days even the high voice was sung by a man!

In his 31 years on this planet Franz Schubert wrote an astonishing 1000 pieces of music. When asked how he managed to do that, he simply said: ‘When I finish something I just move on to the next thing.’ For many people he is the greatest song composer ever. His instrumental works often have a bittersweet quality that is immediately recognizable. Schubert was a shy man, especially with women, but he did contract syphilis, which probably contributed to his early death. This is a movement from the great A major piano sonata, finished just a few months earlier.

Before he died, at the height of his popularity, from an intestinal infection, Sicilian Vincenzo Bellini wrote some of the most archetypical Italian ‘bel canto’ operas. His smooth arias gave singers every opportunity to show off, in long and beautiful melodic lines that are said to have influenced his friend Chopin in writing his Nocturnes. In those days ‘Casta diva’ from the opera Norma, would have been instantly recognized by anyone who knew just the smallest bit about music.

When Belgian composer Guillaume Lekeu came home after first seeing Wagner’s Tristan, he took off his shoes and threw them into the fire, because he couldn’t be bothered anymore with such mundane things. The story is typical for this uncompromising young man who carried a copy of Beethoven’s last string quartets wherever he went (which is a composers way of saying that you can never aim too high). Lekeu only started his musical development at the age of 14 and died of typhoid less than ten years later (apparently after eating a contaminated sorbet). ‘My music,’ he said ‘will be strange, flawed, perhaps even horrible, but at least it will be original.’ He forgot to add: passionate and ambitious. For just that amazing violin sonata he deserves a place among the greats.

George Butterworth was considered the most promising British composer of his generation. He served as a highly regarded platoon leader during World War One, and was killed by a sniper during the battle of the Somme. Many people in Britain may have heard his tone poem for small orchestra, The Banks of Green Willow, because it’s often used in TV commercials. It’s a short and lovely piece that conjures up a very English atmosphere.

Lili Boulanger struggled with ill health most of her short life, but it only seemed to strengthen her determination. When she was told that her illness (Crohn’s disease) was incurable and that she had only two more years to live, she systematically started finishing all the works she had not yet completed. There is nothing cute-young-girlish about her compositions, especially the choral works. They’re grand, serious, sometimes spectacular, and deal with great religious and spiritual issues. Her most famous work is the Pie Jesu, but I prefer the hypnotically oriental Vielle Prière Bouddhique (Old Buddhist Monastery).

Jehan Alain, elder brother of the famous organ player Marie-Claire Alain, wrote mostly short and highly colourful organ pieces. I’m not a great fan of organ music in general, but there is just something about that dreamy, almost synthesizer-like Le Jardin Suspendu (The Hanging Garden) and the quirky Fantasmagorie, evoking the sound of a steam train. At the start of World War II, Alain served as a dispatch rider in the French army. When on reconnaissance, one day before the armistice, he ran into a group of German soldiers and killed more than a dozen of them, before being killed himself. He was supposedly found beside his motorbike, with music papers lying all around. He posthumously received the Croix de Guerre for bravery.

Another casualty of war, Veniamin Fleishman was a highly talented student of the great Soviet composer, Dmitri Shostakovich. When war broke out he was working on an opera, Rothschild’s Violin, based on a Chekhov story set in a late 19th century Jewish ‘shtetl’. To help defend the city of Leningrad, he joined the civil brigades (‘Candidates for corpsehood’, Shostakovich bitterly commented.) Fleishman was one of the first to be killed. When Shostakovich was evacuated from the city he managed to rescue his pupil’s unfinished manuscript, which he completed a few years later.

Hugo Distler’s instrumental music was condemned by the Nazis, but his vocal music was generally recognized in the church. In fact, he is seen as one of the most influential innovators of 20th century church music. Nevertheless, the stress, the deaths of his friends in war and the threat of being conscripted into the army himself, became to much for him. He killed himself using the fumes of his own gas oven. This piece, Wachet auf (Wake up!), sung by a boy’s choir, has a clear beauty that is in wry contrast to his own troubles. 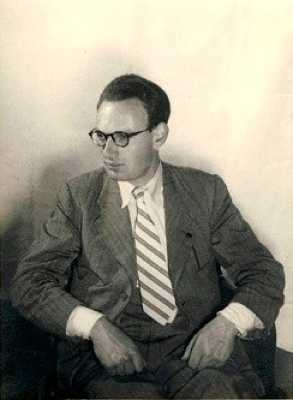 I could not find a Youtube-fragment of Dick Kattenburg’s work. But the story of this Jewish-Dutch composer is too remarkable not to be told. Dick Kattenburg spent years in hiding during the Second World War. Like Anne Frank, he was eventually betrayed and sent to Auschwitz where he died, sometime during 1944. For over half a century only one of his works, a sonata for flute, was known. But then, moved by a rare performance of this piece, Kattenburg’s niece searched the attic of her mother’s house, where, amazingly, she found a box with dozens of other works, most of them of outstanding quality.

Kattenburg’s early pieces are witty, full of lovely tunes, dance rhythms and the occasional blue note. Although he hardly had any musical training, his style developed rapidly during the war, becoming more serious and influenced by Debussy, Stravinsky and Jewish folk music. In a tragic effort to preserve his manuscripts he never used the word ‘Jewish’ in his titles, instead substituting ‘Palestinian’ or ‘Romanian’. His chamber music works and songs have recently been recorded for the very first time. You can find short impressions on: http://www.allmusic.com/cg/amg.dll?p=amg&sql=43:194868