Pixar has created a world of imagination, fantasy, wonder and, most of all, great storytelling. Most of Pixar’s films fall into the categories mentioned. The studio has brought CGI animation, and animation overall, to new heights. Each of the films presented here are as memorable as the last, and each could be considered modern classics. Never has animation made familiar stories and cliched plots and yet, they continue to create stories that are so compelling, it’s astonishing. This list counts down, in ascending order, the awesome animation films of Pixar. 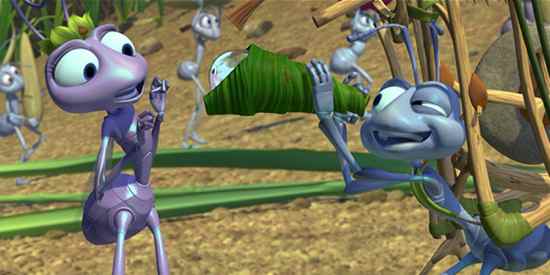 This story involves an ant, Flik, who is a misfit in his ant colony. After being terrorized by a large gang of grasshoppers, it is up to Flik to find a group of warriors, in the city of bugs, for the protection of his colony. But the best Flik has are circus bugs. A Bug’s Life is a rich, imaginative and compelling tale in the Pixar series. It’s animation was critically praised due to it’s beautiful visuals of landscapes in the world of bugs. But the characters were so one sided, it reached the point where it just got annoying. I wouldn’t say they were exactly bland and boring, because they were very entertaining, but most of the characters seemed to have no sympathy towards other characters, which made it hard to relate to them. A Bug’s Life is still a very entertaining film, with storytelling at it’s best. 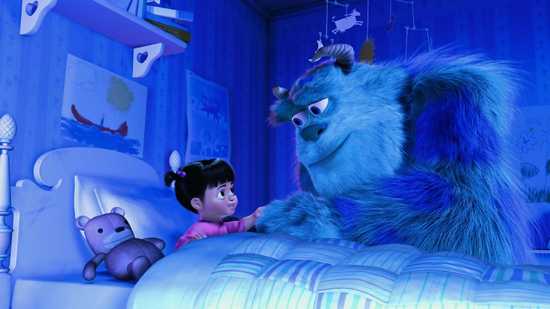 Monsters, Inc. is a strange world, where Monsters run their city’s power by scaring little kids at night time… sound familiar? Little kids are considered infectious in the monster city, Monstropolis. Sulley, a kind employee of this strange company, accidentally brings a little girl into Monstropolis. Strangely, this little girl is not afraid of Sulley the least bit, and together they form a father-daughter like relationship. Unfortunately, this creates desperate risks for Sulley. Monsters, Inc. is a film that sparks the imagination of kids and adults alike, it is creative and genuine. It’s a movie that anybody can relate to. Monsters, Inc. was, indeed, a great film, but it still did not reach the full potential of other Pixar films. It’s three main characters are memorably likable, but the rest of the characters lacked importance, which made the plot a bit bland. Even with a flaw like that, the film is still a classic. 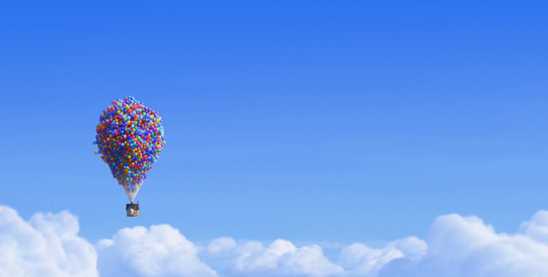 An old geezer ties thousands of balloons to his house, and flies off towards South America. There he plans to live his, and his deceased wife’s, lifelong dream. With him is a talking dog and a chubby boy, who gets him into a lot of trouble. A very compelling tale that seems to fit perfectly well with audiences of all ages. The characters seem to be one of the most memorable of all Pixar films, most notably the old man, Carl. He is as inspiring as he is powerful. He is very motivated for his age, and he proves that life is not uncontrollable, as he embarks on his tough journey to find his dream home. A giant cliff with a waterfall. Up is a poignant, moving piece that sets the standards in Pixar. Not to mention it’s amazing score. 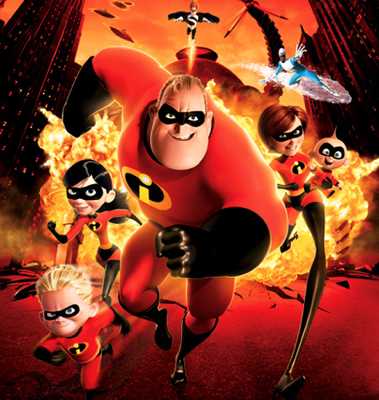 A former superhero leads a family lifestyle, but he can’t seem to leave his crime fighting ways, as super villains get in the way of his personal life. Before the film WALL-E, this was quite possibly the most realistic tale in Pixar history, but, surprisingly, it’s still one of the more enchanting tales, too. Though a bit violent, The Incredibles’ action scenes are unforgettably entertaining as the characters are very likable. The animation was well done, as was the voice acting. But what made this film so interesting was the bizarre premise, uncommon in most Pixar features, or even other animated features. 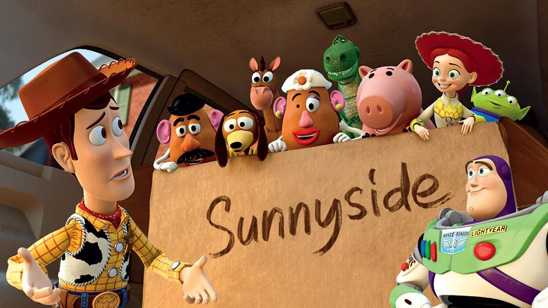 Quite possibly the most poignant of all three Toy Story films, and maybe even Pixar in general, Toy Story 3 follows the story of these beloved characters, as they desperately try to find a new home. But, escaping the evil clutches of Sunnyside day care seems to be a bigger priority for them. The characters have really grown on us, they have not changed at all after ten years, amazingly. Usually movie sequels that come this far become a bit tawdry; most notably Shrek 3 or Ice Age 3. But Toy Story 3 is anything but tired, as the entertaining plot keeps us hooked with suspense and it’s brisk pace. The film feels as magical as ever, and the animation has improved over the first two films. While it may not be as fresh or enthralling as the first two, it’s still a timeless film by Pixar.

A story of a lonely, trash cleaning robot, WALL-E, left on a contaminated Earth to clean it, as the humans are away on the mother ship in space. This mother ship has then sent a female robot, Eve, to assist WALL-E, who quickly falls in love with her. But trouble abounds as Eve is called for an emergency on the mother ship. WALL-E desperately follows, in hopes of finding Eve again, even facing dangers in his quest. WALL-E is not only a classic animation film, but it also achieves success as a sci-fi film. It has some of the greatest visuals in animation I have ever seen. Due to the lack of verbosity, it’s characters seem odd in Pixar films. Either way, they’re still very intriguing, as the low dialogue makes the film even more charming. WALL-E’s story was less interesting than it’s visuals, but that didn’t stop it from becoming one of the better Pixar films. WALL-E is a classic that adults seem to enjoy even more than children.

A story of a rat who dreams of becoming a chef, and cooking for humans. But obviously, he’ll have to try hard to accomplish his dream, as he is a common pest. A very rich story with fantastic characters, meaning both humans and rats alike. It’s message and theme gets a bit off topic at times, as sub plots take over, but the movie is still entertaining as a whole. Besides the talking and the human attitude, a rat’s life is portrayed as realistically brutal in this film. It does not get too over the top with its strange plot, but it does hook viewers with it’s perfect suspense. The animation couldn’t have been any better, as the visuals were perfectly shown in the film. And lastly, it showed a realistic portrayal of how stressful a chef’s life can be working for a fancy restaurant, especially one in France. 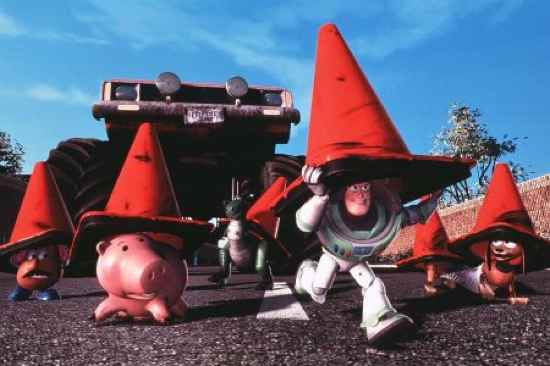 One of the greatest sequels of all time. Toy Story 2 continues the story of the toys, as they attempt to save their friend, Woody, who was abducted earlier and is now about to be sent off to a foreign country. Arguably better than the first, but it’s definitely not as entertaining. Toy Story 2 is definitely higher on a poignant level, but it never loses it’s charm and strong comedic elements along the way. What made this a standout movie, as a film alone and not a sequel, is the development of the characters. They seemed to gain new understanding of love, friendship and even sympathy for one another. The characters even seem to receive a much bigger role in this film than the first. Also, Toy Story 2 explores deeper into the life of a toy. This film is one of the rare sequels that is an actual classic in it’s own right, such as Godfather Part 2, Star Wars – Empire Strikes Back, Lord of the Rings The Two Towers and The Dark Knight, to name a few. That’s in my opinion, anyway. 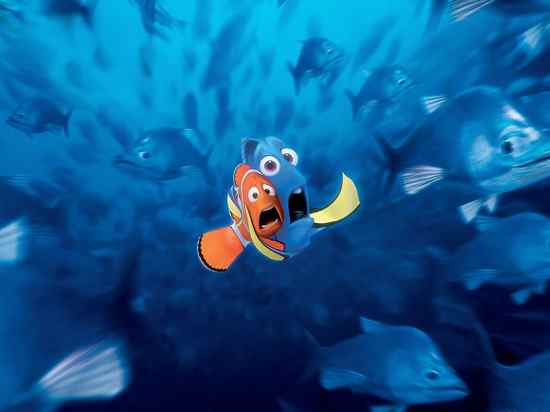 An epic story of a widower clown fish who loses his son to humans. This film is the best adventure story in Pixar history, as it’s placed on a grand scale, making it an epic. The characters were partially interesting, possibly not as great as other Pixar films, but entertaining throughout. Before Up, Disney had never really made long journey films. Finding Nemo was new for it’s kind, and the setting being an ocean, they had a whole world of ideas to explore. This film was poignant and sad to a suitable level, while adding as much comedy as it could have. Finding Nemo is great for both adults and kids, great for both of them in a very different way. The emotional conflict makes it easy to relate to for adults, and the winsome attitude will have the kids attention. 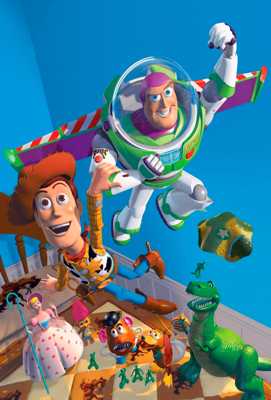 The story follows a toy cowboy, Woody, who seems to be jealous of a new toy, Buzz, that takes his place as his owner’s favorite. The conflict takes the duo into new heights of understanding friendship, jealousy and hate. The film is comedic, emotional, charming and very magical. Toy Story is a completely unforgettable film for it’s fans. The way the two main characters are developed is amazing, though it mainly focuses on Buzz and Woody only, it’s what made the film so powerful, not to mention more entertaining. The comedy between Buzz and Woody seems to be a stronger element than the emotional dynamic, but Toy Story is an, overall, entertaining film which will satisfy viewers of all ages. It’s not only the best Pixar film of all time, in my opinion, it’s the greatest animation film of all time. 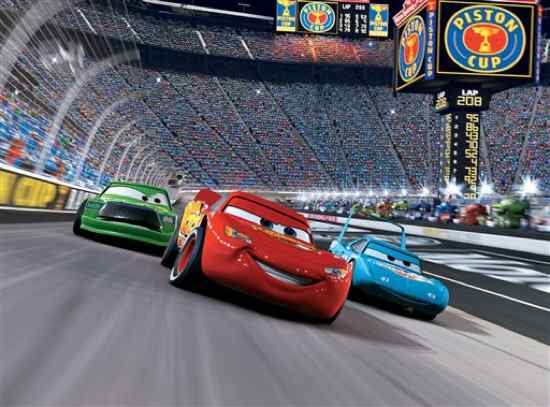 A story that follows a racecar, Lightning McQueen, as he arrives, accidentally, in a town called Radiator Springs. There, he realizes the meaning of true friendship and his lack of understanding for his fellow cars. Cars is a magnificent film with wonderful animation that made it very visually pleasing. But what made it so low on the list? The storytelling lacked the magical imagination that made the other Pixar films so magnificent. The characters sure didn’t help, they were as bland and predictable as they could have been. Whether or not you agree, Cars is still one of the most entertaining films of the year, despite reaching no heights in the evolution of Pixar.