The Earth is a miraculous place and with the advent of technology, places that were remote and hidden have been finding their way into the eyes of the world. Traveling isn’t always a possibility for everyone; the internet gives a picture view into the places we can’t physically visit, and opens up the wonders of our planet. This list looks at some of the most unique areas around the world. The list includes natural areas and those created by humans. They are listed in the order I found and researched them, and are by no means diminished by their order on the list. 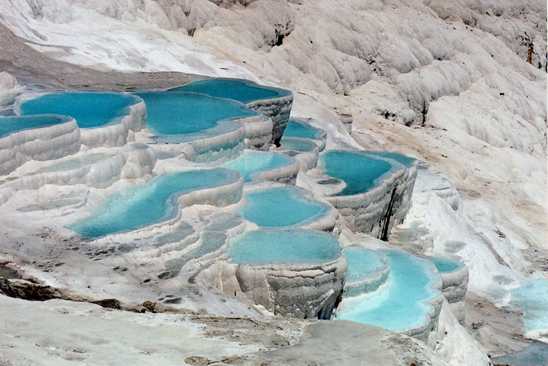 Pamukkale means cotton castle, and has also been called the white castle because of the vast whiteness caused by the high concentration of calcite in the water. Travertine sedimentary deposits have created the white terraces, petrified waterfalls and mineral forests that make up the landscape. The 17 hot springs are heated by an underground volcano. The beautiful area of Pamukkale, Turkey, has been used as a healing spa for thousands of years. The healing properties of the area drew people from all over, and the Romans built the ancient city of Hieropolis there. To help preserve the area, hotels and access roads were taken down and man-made pools were created to help in keeping the natural beauty of Pamukkale. 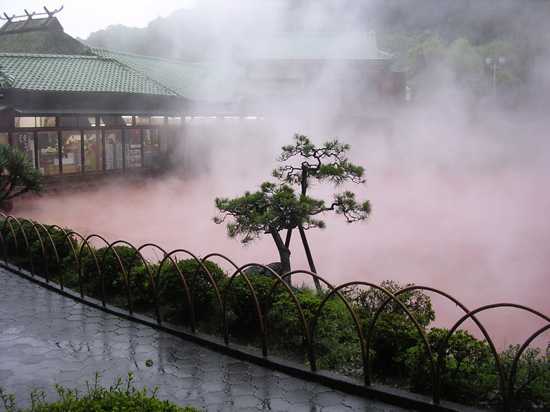 Beppu is home to over 2,800 hot springs and is found on the island of Kyushu. The Nine hells of Beppu are some of the more unique springs in the area. Hell 1 is Umi Jigoku meaning “sea hell”. The pool is a turquoise blue and is hot enough to boil eggs. Hell 2 is Oniishibou, meaning “shaven head hell” and gets its name from the boiling gray mud. The mud bubbles to the surface and resembles the shaved head of Buddhist monks. Hell 3 is Shiraike Jigoku meaning “white pond hell” and is filled with boiling white water caused by the high calcium concentrations. Hell 4 is Yama Jigoku meaning “mountain hell. Yama Jigoku was made by a mud volcano that spewed so much that it created a small mountain surrounded by small pools. Hell 5 is Kamada Jigoku “cooking pot hell”. This is a collection of boiling hot springs that are flanked by a red devil statue featured as the cook. Hell 6 is Oniyama Jigoku, meaning “devil’s mountain hell”. Oniyama is a very strong stream that can pull 1 ½ train cars, and is also home to about 100 hellish crocodiles. Hell 7 is Kinryu Jigoku “golden dragon hell”. This spring is featured with a steaming dragon. The steam is supplied by the steam of the spring and is directed out of the dragon’s nostrils. The dragon gives the illusion of flying when water spouts out at sunrise. Hell 8 is Chinoike Jigoku, meaning “blood pond hell”. Chinoike gets its name from the bright reddish colored water caused by ferrous (containing iron) minerals in the pond. Hell 9 is Tatsumaki Jigoku, meaning “spout hell”. Tatsumaki is a geyser that spouts every 30 minutes and has a temperature of about 105 degrees Celsius. 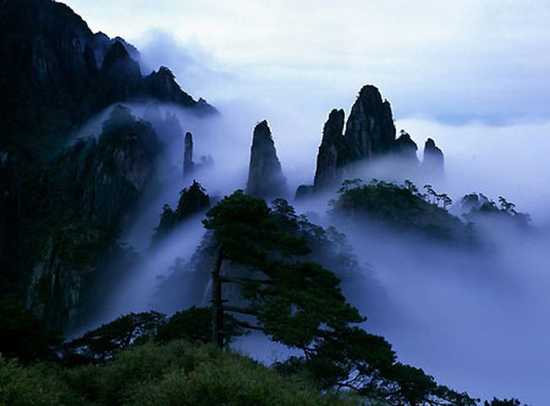 Sanqingshan has been considered a sacred place. Used by Taoists for meditation, and believed to lead to immortality it’s easy to see why. Sanqingshan is shrouded in mists for 200 days of the year. The mist gives an otherworldly quality to the mountain, along with thousands of streams that pour into pools, granite formations that resemble silhouettes of humans and animals, and strangely shaped pine trees. The pools and vegetation create unique environments that lure many exotic and rare birds and animals to make their home there. Sanqingshan is home to about 2,500 plant species. This is one of the only places to find the plants that are used in making traditional Chinese medicines.

7
The Plain of Jars
Lao 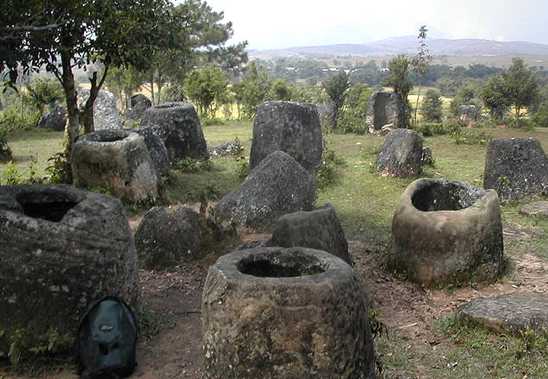 The Plain of Jars is one of the oldest archeological mysteries in Southeast Asia. Located on the plateau of Xieng Khouang, in the mountains of Indochina, there are about 90 different jars sites. Each site contains from 1 to 400 jars. It has been estimated that they were created 3,000 years ago, and are made of sandstone, limestone, granite, breccias and conglomerate, with the majority being made of sandstone. The tallest jar is about 9 ft. tall and all are made from their own individual slab of stone. At first glance they appear to be haphazardly placed, with some standing upright and others on their sides, pointing in different directions. Further studies have revealed that the jars are placed in positions that form the constellation patterns of the stars. There has been lots of speculation about the purpose of the jars – drinking glasses for a giant race, being used to collect rainwater, or as burial urns. Most of the jars are empty, but a few have been found with bodies or tools inside, or filled with miniature Buddha statues. Exploration is hard as the area is littered with unexploded bombs from the Secret War. 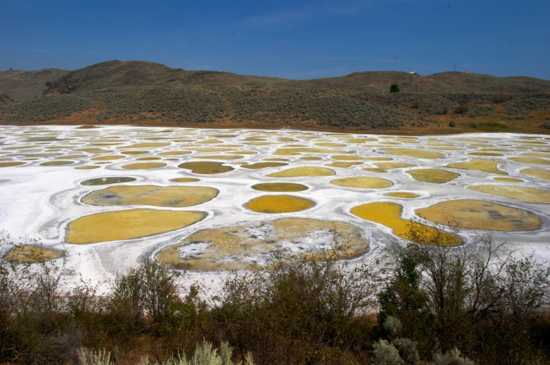 Spotted Lake of Osoyoos was sacred to the First Nations of Okanagan Valley Indians. Osoyoos means narrowing waters in the Okanagan language, and is used to describe what happens to the lake. The lake is a saline endorheic lake, which means it is a closed body of water with no outflow or inflow from other bodies of water. The lake has high concentrates of many different minerals, and contains some of the highest quantities of magnesium sulfate, calcium and sodium sulfates in the world. There are also eight other lesser minerals in the water, including small amounts of silver and titanium. The minerals in the lake are very beneficial, and were mined during WWI to use in the making of ammunition for the war. The minerals are what give the lake its uniqueness. During the summer, as the water evaporates, spots are formed which have different colors depending on which mineral is most present. The spots crystallize and form walkways of different colors. The colors can be white, yellow, blue or green. The lake is on private property and they allow very little public access. 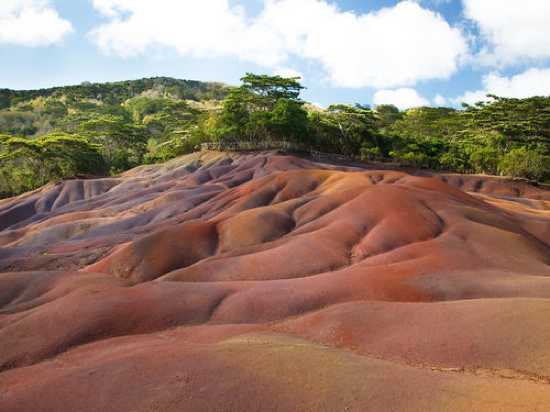 The Republic of Mauritius is an island nation located off the southeast coast of Africa. It is part of an archipelago formed from a now dormant undersea volcano. Mauritius is home to two natural wonders. The first is Chamarel Falls, which are three thin waterfalls that fall about 300 ft. down a plateau. They are the tallest waterfalls in Mauritius. Mauritius was once known only for its waterfalls, then in the 1960s, the colored dunes were discovered. The colored sand was created from clay made of lava cooling off at different times. The effect caused the 7 different colors of sand to form; they include red, brown, violet, green, blue, purple and yellow. The most unique aspect of the sands is the fact that if you take all the colors and mix them together, they will naturally separate and rejoin the correct color grouping that they belong to. How this happens is a mystery to scientists who have tried to solve the strange properties of the sand. Another mystery of the sand is that there is no visible erosion. The area has a heavy rainy season so erosion should be a definite effect of nature. 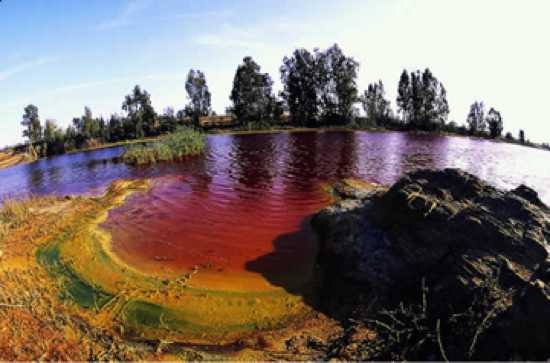 The Rio Tinto runs from the Sierra Moreno Mountains down to the Gulf of Cádiz in Huelva, Spain. Rio Tinto translates into red river and this is exactly how the river appears. High levels of iron in the water cause the red coloring of the river. The river has been mined for copper, gold and silver from ancient times, and continues as of today. The Rio Tinto has the oldest mines in the world, which are believed to be the fabled King Solomon’s mines. Due to all the mining, the river has a high acidic content and is home to organisms that survive in extreme conditions. This has led to scientific study of the river, used in the study of the underground lakes of Mars and Jupiter. The link to outer space seems appropriate, as the Rio Tinto area has an alien lunar like landscape. The mining has created walls of terraced rock that has formed a natural amphitheater. 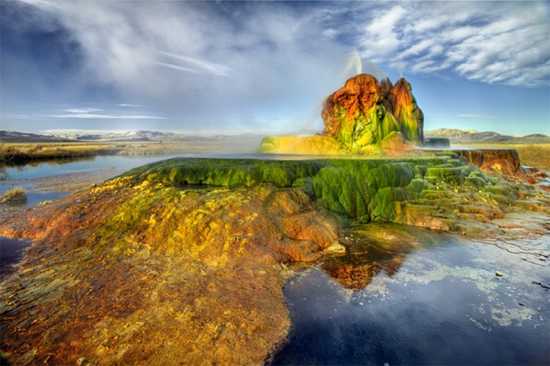 Fly Geyser was accidentally created in 1916 while drilling a well for water, though they didn’t start forming until 1960. The spot picked had an unknown geothermal area. The heated water eventually found a weak spot in the well and pushed itself to the surface. The minerals started building up to create a mini volcano of about 5 ft. tall, with layers of terraces. The terraces have different colors from the minerals in the water and the geothermal water has found more weak spots to create two more geysers nearby. The water spouts continuously and fills holes and hollows in the terraces, to give the area a surreal look. Water where there isn’t much water to begin with has attracted swans, ducks, and other animals to the area. Fish also swim through the ponds, introduced by an unknown human dropping the eggs in the water. 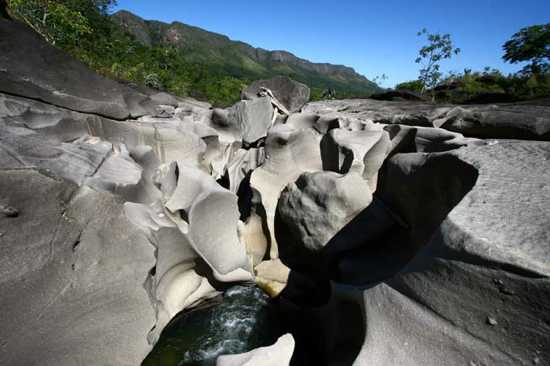 Vale Da Lua is a stone basin that has been carved out by the San Miguel River. The name translates to valley of the moon and was given that name because the erosion of the rocks by the river has left them smooth, and in shades of gray similar to the look of the moon. The valley has some of the oldest rock formations in the world, with an estimated age of 1.8 billion years old. The river has created caves, grottoes, waterfalls and bizarre rock formations, to form a labyrinth in the narrow canyon walls. Seen from space, the area is the most luminous on earth. Quartz and the smoothness of the rocks cause the glow. The surrounding forest is abundant with wildlife and lays claim to many varieties of orchids. The river has made the area a work in progress, as it continues to erode and change the landscape. 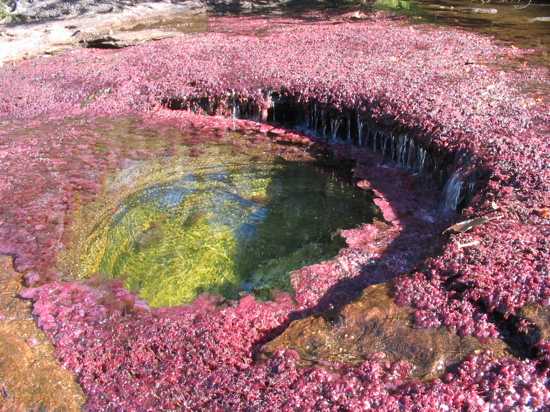 Caño Cristales is a river located in the Serrania de la Macarena Mountains. The area where the river is found is so remote that you can only get there by horse, donkey, or on foot. Caño Cristales is filled with waterfalls, rapids, wells and hollows, with water so clear you can see all the way to the bottom. During most of the year the river seems like any other, with the water coursing over green algae rocks. Then during the period of time between the wet season and the dry season – which happens between September–November – the river transforms, becoming a river of color. The algae in the water produce a riot of color; red, blue, green, black and yellow line the river. This river has no fish because of the complexity of the channels. Caño Cristales has been called “The River of Five Colors”, “The Liquid Rainbow” and “The River That Ran Away From Paradise” and it’s honestly easy to see why.