Coming from a country where the worst creature I have to face is an earwig (why must they live in the vegetable patch!?), whenever I go abroad I am always startled by insects, bugs and all manner of other invertebrates that the world has to offer. Coming from Britain I instinctively think of invertebrates as small and innocuous, but the more you study biology, the more this is proved to be false. This list is fairly personal as the term ‘unnerving’ is very subjective, but I hope there are some entries on this list which are new to you. Here is a list of the top ten startlingly large invertebrates in the world. 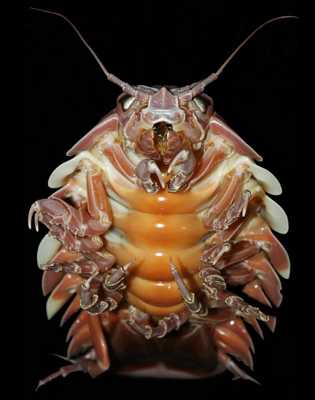 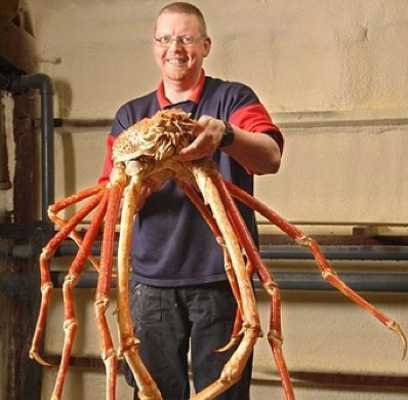 The Japanese spider crab, Macrocheira kaempferi, has the longest leg-span of any arthropod. The largest American lobsters can rival the Japanese spider crab for weight, but do not approach their leg-span at up to 5.8m. The Japanese spider crab is omnivorous, and will eat whatever comes within reach of its long, clawed arms. There is debate as to why they should have evolved such ungainly long legs though they may allow the crabs to move more quickly than the things they prey on. It is widely reported online that these crabs have been seen on land, but I can find no reliable sources for this and it seems unlikely they would be able to support themselves out of the water. 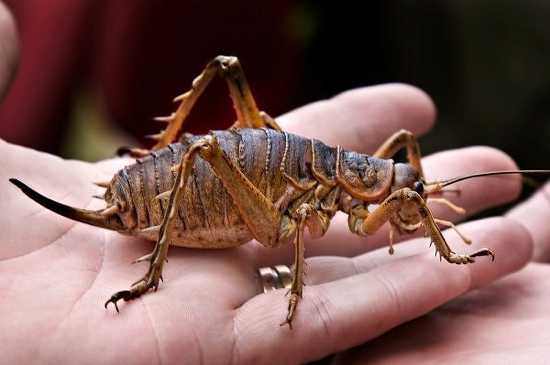 The giant weta, Deinacrida heteracantha, of Little Barrier Island in New Zealand are the heaviest insects in the world. Deinacrida means ‘terrible grasshopper’ though these giant weta bear only the most passing resemblance to grasshoppers. The largest specimen weighed 71g, and some can be over eight inches long. This is an example of island gigantism as the weta have adapted to fill biological niches filled by small land mammals elsewhere in the world. Giant weta feed mostly on vegetation but their powerful mandibles can give a painful bite, but this is very uncommon. D. heteracantha is now limited to just Little Barrier Island but other weta are common in New Zealand. Peter Jackson named his special effects company after weta, and in his King Kong, enormous predatory weta are amongst the creatures lurking in a ravine. 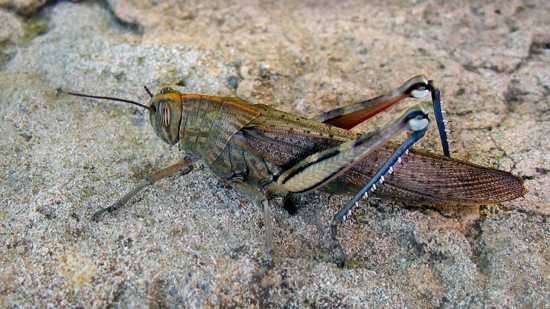 Locusts are giant grasshoppers, there is no real difference between locusts and grasshoppers, only in their swarming ability and size. This entry may leave me open to an accusation of British bias, as other countries will be far more familiar with locusts, but they are larger than you think. I worked with locusts while studying their jumping mechanism, and they are very disconcerting animals. When they fly they make a loud buzzing noise, and when they land on your clothes their feet latch heavily into the fabric making them very hard to dislodge. Being caught in a swarm of them must be very unpleasant. Swarms of locusts can contain billions of individuals, and consume millions of tons of crops as they pass. 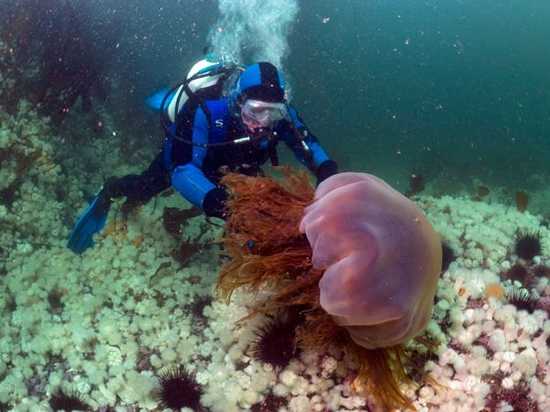 The lion’s mane jellyfish, Cyanea capillata, is sometimes stated as the world’s longest animal with the largest specimen recorded at 37m from bell to tentacle tip. The bell, the body of the jellyfish, can be 2m in diameter. Their long tentacles capture small free floating creatures but are also the home to small shrimp who use them as protection. The tentacles cause only mild pain to humans but, being so long, can catch swimmers unawares. The pain can be lessened by treatment of the site with vinegar, but even this is usually unnecessary. The larger the jellyfish grow, the darker they become in color, with the largest specimens being a dark, blood red. Like all jellyfish they move mainly with the ocean currents and are only able to gently pulse to keep them near the surface. 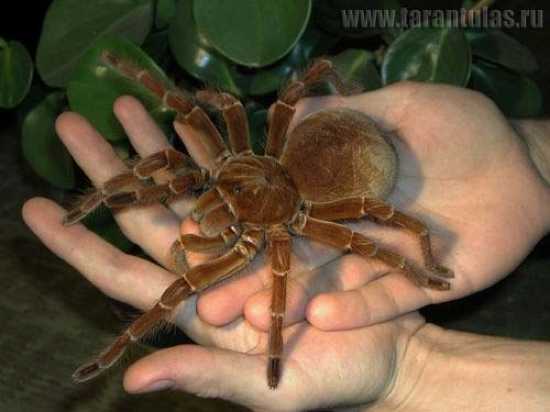 The goliath bird-eater is the heaviest spider known, with the largest weighing up to 180g. Their 12inch legspan made them the largest spider known until, in 2008, a giant huntsman spider was discovered in Laos. The goliath, Theraphosa blondi, is far more common however and is even kept as an exotic pet. It is known as bird-eater because, like other large spiders, it will sometimes prey on small birds as well as small mammals and lizards. Their diet is mostly insectivorous but they have sufficiently long fangs to bite humans and they are venomous. Like most tarantulas, their venom is only weakly acting on humans. When threatened the Goliath can make a hissing noise by rubbing its legs together. This may also serve to spread the tiny, barbed hairs which can be very irritating. While I like unusual pets, I am not sure a spider covered in irritating hairs sufficiently large to cover my face is the right pet for me. 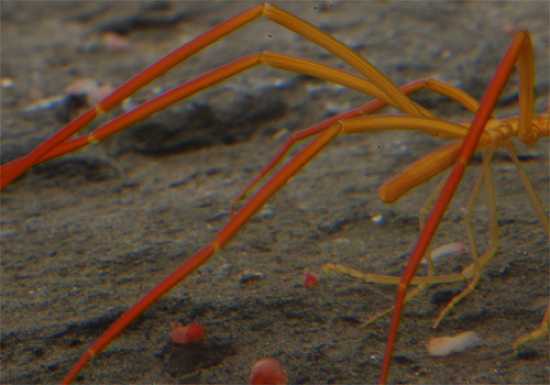 Sea spiders, Pantopoda (all-legs in Greek), are a relatively little known group of organisms. The giant sea spider, Colossendeis colossea, is the largest of these unusual animals at around a foot long. They are not true spiders though they appear to be more closely related to them than any other group. Their bodies are so small that their long legs often contain several of the organs and the gonads of the sea spiders. The intestinal tract often has blind pouches extending into the legs where food may be digested. The giant sea spider feeds mostly on cnidarians (mainly jellyfish and anemones) by sucking out their soft insides with a piercing proboscis. This is probably the most alien-looking invertebrate on the list. 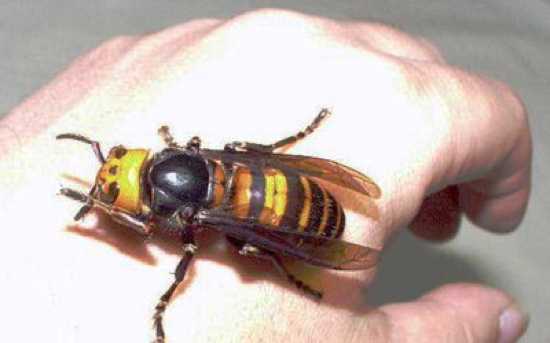 The Asian giant hornet is the scariest insect I know of. The giant hornet, Vespa mandarin, is the most deadly animal in Japan, and its sting can prove fatal even to people not allergic to hornet stings, though it usually takes many stings. Each sting is excruciatingly painful. At almost two inches long they look very threatening when they hover in front of your face, as I discovered during a picnic. The hornet is a killer of other insects and can devastate a bee hive, as they crush all the bees inside with their powerful mandibles before eating the honey and carrying bee abdomens back to their own larvae. Japanese honey bees have a defense against the hornet, however. When they detect an attacker they will surround the hornet with their bodies and contract their flight muscles rapidly. Forming a ball around the hornet this muscular activity causes sufficient heat, and produces enough carbon dioxide, to kill the hornet. 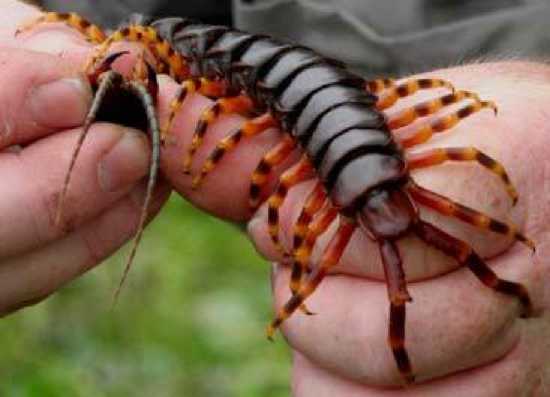 The Amazonian giant centipede, Scolopendra gigantic, is the first invertebrate on this list which can actually cause harm to humans. The giant centipede can be found in northern South America and several islands. They can reach a length of up to a foot. They prey on insects, spiders, lizards, frogs, birds, mice and bats. There is something unsettling about an invertebrate hunting vertebrates. The centipede is fast moving and not afraid of humans. When humans are bitten the bite in intensely painful but rarely causes fatalities. Treatment for the bite usually involves pain management and a tetanus immunization, as well as antibiotics to stop infection. I am generally uncomfortable with small centipedes, so this species is the stuff of nightmare. 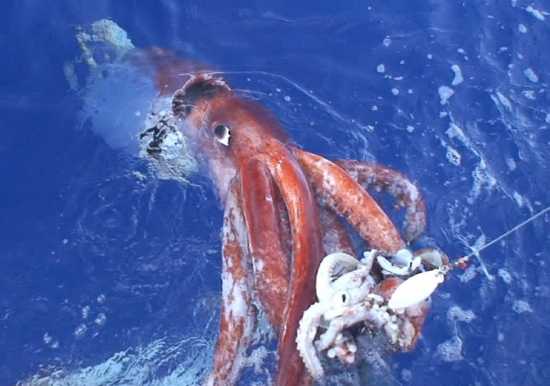 What’s bigger than a giant squid? The colossal squid is now thought to be the heaviest cephalopod, and is also the largest invertebrate ever recorded. For a long time stories of enormous squid were though to be just sea tales with no more truth than those of mermaids. Now we have several specimens of both the giant squid and the colossal squid. The national New Zealand museum in Wellington has an exhibition where a 10m long specimen can be seen. This creature was caught in 2007, by fishermen in the Antarctic ocean. Study of specimens seems to suggest that the colossal squid is an ambush hunter which uses bioluminescence to lure in the fish it eats. The large specimen in New Zealand is unlikely to be as large as they can grow; beaks of colossal squid have been found in sperm whale stomachs which are much larger than the beak of this specimen.