Although the Bible can be inspiring and informative, there are some unusual verses that can be sexually explicit and, sometimes, even contradict the Ten Commandments. After discovering a few myself, I researched more into the matter and discovered some truly bizarre quotes from various passages. I ranked them based on what I thought were the most unusual. Enjoy! [NOTE: Quotes below may differ from those of other editions of the Bible – specifically the Douay-Rheims which is the Bible commonly used for quotations on Listverse.] 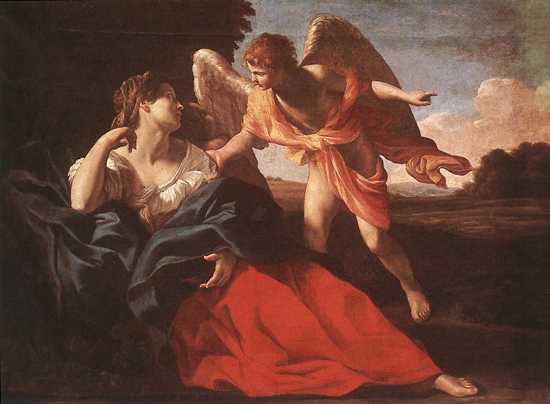 And he said “Hagar, Sarai’s slave girl, where have you come from and where are you going?” She answered, “I’m running away from Sarai, my mistress.” The angel of the Lord said to her, “Go back to your mistress and submit to ill treatment at her hands.” [Pictured above]

When two men are fighting and the wife of one of them intervenes to drag her husband clear of his opponent, if she puts out her hand and catches hold of the man by his privates, you must cut off her hand and show her no mercy.

“Look, I have two daughters, virgins both of them. Let me bring them out to you and you could do what you like with them. But do nothing to these men because they have come under the shelter of my roof.” 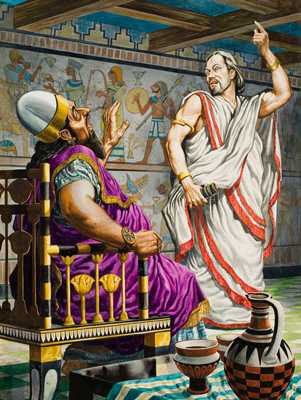 Then because of the dire straits to which you will be reduced when your enemy besieges you, you will eat your own children, the flesh of your sons and daughters whom the Lord has given you.

And Ehud reached with his left hand, took the sword from his right thigh, and thrust it into his belly. And the hilt also went in after the blade, and the fat closed over the blade, for he did not pull the sword out of his belly; and the dung came out. [Pictured above]

He that shall copulate with any beast or cattle, dying let him die, the beast also ye shall kill.

Onan knew that the offspring would not be his; so when he went in to his brother’s wife, he wasted his seed on the ground in order not to give offspring to his brother. But what he did was displeasing in the sight of the LORD; so He took his life also.

You also took the fine jewelry I gave you, the jewelry made of my gold and silver, and you made for yourself male idols and engaged in prostitution with them. 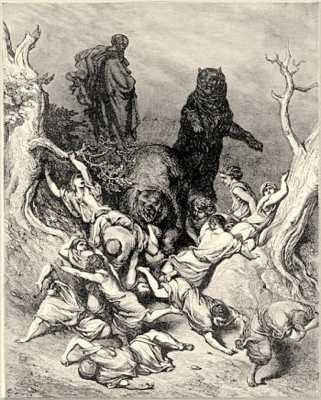 Then he went up from there to Bethel; and as he was going up the road, some youths came from the city and mocked him, and said to him, “Go up, you bald head! Go up, you bald head!” So he turned around and looked at them, and pronounced a curse on them in the name of the Lord. And two female bears came out of the woods and mauled forty-two of the youths. [Pictured above]

No man whose testicles have been crushed or whose organ has been cut off may become a member of the Assembly of God.

And it came to pass by the way in the inn, that the Lord met him, and sought to kill him. Then Zipporah took a sharp stone, and cut off the foreskin of her son, and cast it at his feet, and said, “Surely a bloody husband art thou to me”.

Yet she increased her prostitution, remembering the days of her youth when she engaged in prostitution in the land of Egypt. She lusted after their genitals – as large as those of donkeys, and their seminal emission was as strong as that of stallions.