There is something very fascinating about watching the destructive beauty of things blowing up. It seems that every decent action movie has to have some kind of spectacular explosion. However, in real life there have been many kinds of explosions, and many are greater than the biggest ones in movies. Here is a brief list of the biggest explosions known to mankind. 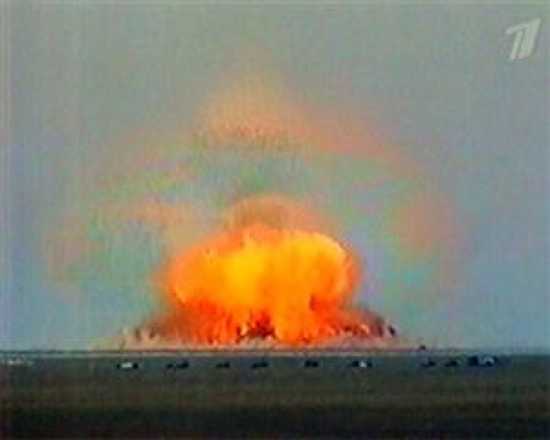 FOAB (Father of all Bombs) is a Russian tactical weapon, designed to detonate in mid-air and deliver an incinerating shockwave to the target area below it. The bomb yields the equivalent of 44 Tons of TNT, making it about as powerful as the smallest nuclear weapons in existence. However, FOAB does not generate the radioactive fallout that nuclear weapons do. FOAB is part of a “miniature arms race” between the United States and Russia. In 2003, the United States developed MOAB (Massive Ordinance Air Blast Bomb) which is a similar device with a yield of 11 tons of TNT. MOAB was quickly termed the “Mother of all Bombs” in accordance with its acronym. In an apparent response, Russia developed its “Father of all Bombs”, in 2007, which it claims is four times as powerful and slightly lighter in weight. However, the United States Military is dubious of these claims, and says that it is very possible that the film that Russia released of the test was doctored, and that several of the “facts” about the bomb were exaggerated for propaganda purposes. 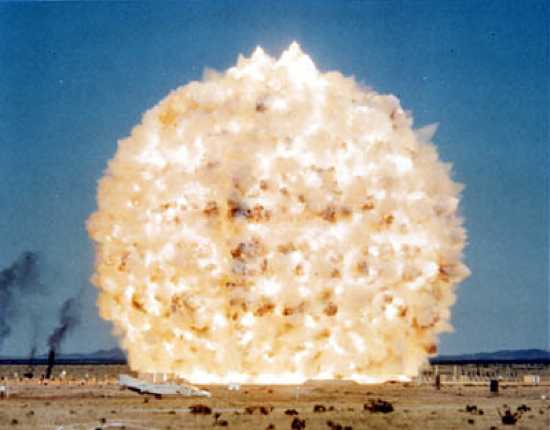 Minor Scale was a test performed by the United States, on June 27, 1985. The United States Defense Nuclear agency detonated almost 5,000 tons of ammonium nitrate fuel oil, to simulate the effect of a nuclear weapon. The main purpose was to see how a small nuclear weapon would affect military hardware. In the photograph, an F-4 Phantom can be seen in the wake of the explosion. An interesting fact: There is a dispute about whether or not this was, in fact, the largest conventional explosion. The Heligoland explosion was carried out by Great Britain when the Royal Navy detonated 6,700 tons of left over arsenal from WWII. While the Guinness Book of Records records Heligoland as being larger, the yield of Minor Scale was greater by about half a kiloton of TNT. 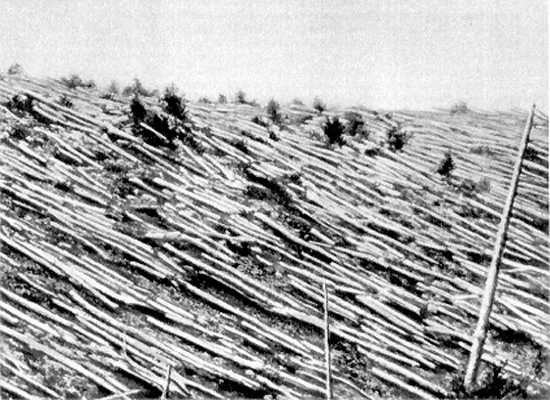 On June 30, 1908, there was a large explosion above the Podkamennaya Tunguska River, in Russia. The explosion created an estimated yield of 10-15 megatons of TNT, or about 1,000 times the yield of the atomic bomb that destroyed Hiroshima, Japan. While there are a good number of conspiracy theories as to what caused the explosion, the majority of the scientific community agrees that it was caused by a meteoroid exploding in mid-air. Even though the meteoroid exploded in mid-air, the event is still considered an impact. The explosion is believed to have occurred in mid-air because, even though there have been several searches for it, no one has ever been able to find the crater. However, there was an area of about 2,150 square km where trees were bent away from the hypocenter of the blast. 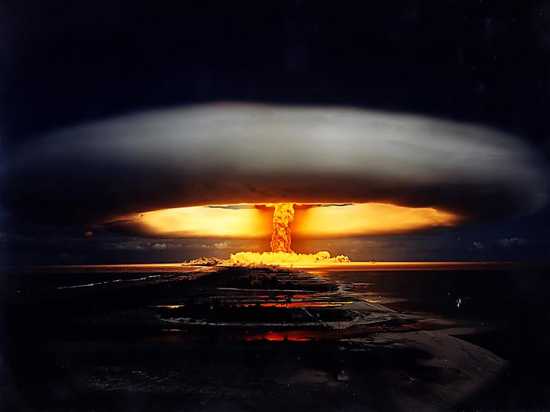 Tsar Bomba was a hydrogen bomb developed by the Soviet Union, and tested on October 30, 1961. With a yield of 57 megatons, it was the most powerful man-made explosion ever. The bomb was actually originally intended to be more around 100 megatons, but the fallout of such a device would have been too problematic. Even though Tsar Bomba was detonated in the very remote location of the Novaya Zemlya island chain, north of the Russian mainland, it still caused a great deal of collateral damage. A village 55 km from the test site was completely leveled. Damage to buildings occurred as far away as Norway and Finland. The explosion created a mushroom cloud 64 km high, and a shockwave that was still detectable on its third passage around the earth. 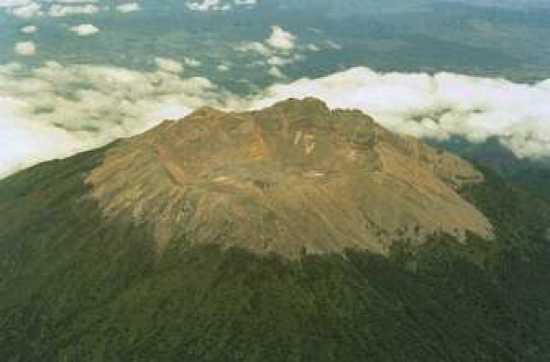 On April 5, 1815, Mt. Tambora erupted in Sambawa, Indonesia, creating the most powerful explosion ever witnessed by humans in historic times. The Tambora eruption is estimated to have unleashed the equivalent of 800 megatons of TNT, making it about 14 times more powerful than Tsar Bomba. The eruption was heard as far away as Sumatra, which is 2,600 km away. Before the eruption, Mt. Tambora was 4.3 km tall, but after it was only 2.85 km tall. The volcano created an ash column 43 km high, and dispersed ash into the stratosphere and around the globe. This ash blocked out the Sun and caused the year 1816 to be the second coldest year in recorded history. Crop failures and famines occurred all over Europe and North America. It is estimated that about 10,000 people died directly from the eruption, and that about 70,000 died from the resulting climate change. 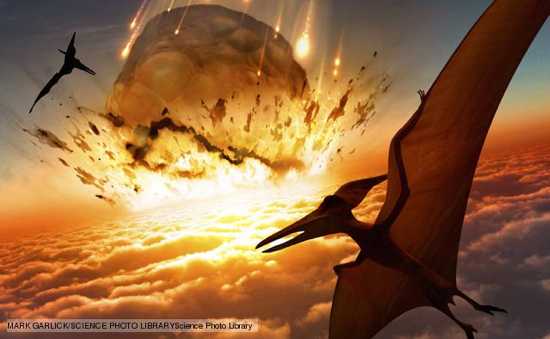 About 65 million years ago, an event known as the Cretaceous-Tertiary Event caused the extinction of many organisms, but is most famous for causing the extinction of the dinosaurs. Many scientists believe that this was caused by an asteroid impact that created the Chicxulub Crater located off the coast of the Yucatan Peninsula. It is estimated that the explosive force of this impact would have been the equivalent of 96 teratons of TNT, or about 1.7 million Tsar Bombas. This would make the impact the greatest explosion to ever occur on earth, for which there is sufficient geological evidence. The impact would have caused climate change, much like Mt. Tambora but much more drastic, and this climate change is believed to be what ultimately killed the dinosaurs. 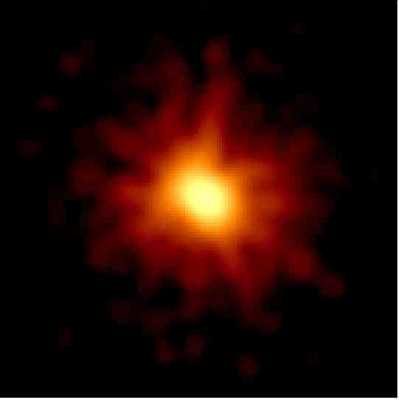 Gamma-ray bursts are among the most violent known events in the universe. The exact cause of Gamma-ray bursts is not fully understood, although most astronomers hold that they are linked to extremely large supernovae. Gamma-ray bursts usually last 20 to 40 seconds and shine gamma-rays (hence the name) in a relatively narrow direction. Gamma-ray bursts are extremely rare, with one occurring every few hundred thousand years in each galaxy. On March 19, 2008, a gamma-ray burst called GRB 080319B occurred, and was visible to the naked eye for about 30 seconds. The explosion took place 7.5 billion light-years away, making the most distant object viewable without a telescope. The explosion is estimated to have generated the equivalent of 2Ã—1034 tons of TNT, or about the equivalent of 10,000 times the Sun’s weight in TNT detonating all at once. 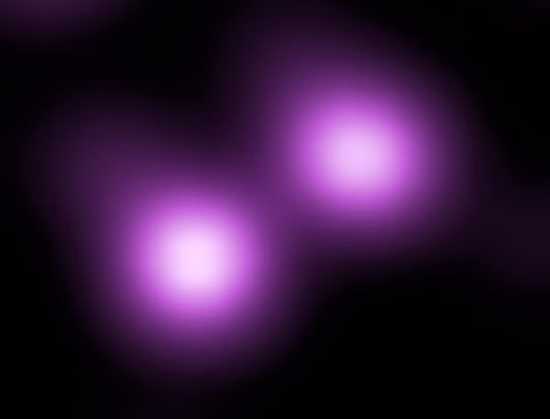 On September 16, 2006, the largest known supernova, SN2006gy, was discovered. Supernovae occur when stars run out of fuel, collapse on themselves, and then explode. Extremely large supernovae, or hypernovae, are among the most violent events in the universe, and are believed by many to be the source of gamma-ray bursts. SN2006gy occurred 230 million light years away, when a star about 150 times as massive as the Sun collapsed on itself. The amount of energy output by this hypernova is estimated to be approximately equivalent to 2.5Ã—1035 tons of TNT, which is roughly the same amount of energy put out by all the stars in the Virgo Supercluster of galaxies in one minute. An interesting fact: Because hypernova are usually caused by very large stars, there is usually enough remaining material from the star to continue collapsing after the explosion. This remaining material will sometimes collapse until its volume reaches zero. This means that many hypernova form black holes. 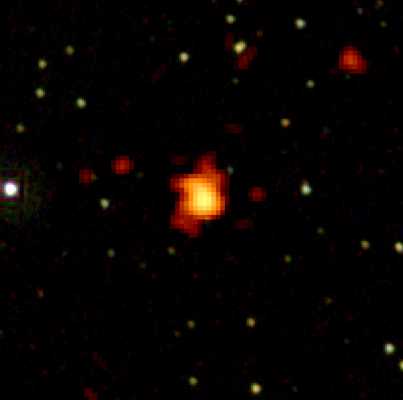 The universe is a big place. Astronomically large objects are difficult to comprehend, and the largest known explosion, GRB 080916C is no different. GRB 080916C was a gamma-ray burst that was first recorded on September 16, 2008. The burst occurred about 12.2 billion light-years away and lasted 23 minutes, which is a very long duration for a gamma-ray burst. For those 23 minutes, the gamma-ray burst was putting out more energy than most galaxy superclusters. It is estimated that the blast had the equivalent amount of energy of 2Ã—1038 tons of TNT. That’s the same as a trillion Tsar Bombas going off every second for 110 billion years, or about 7,000 times the amount of energy that the Sun is expected to put out in its lifetime. 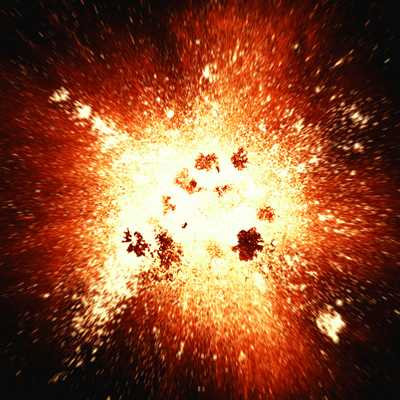