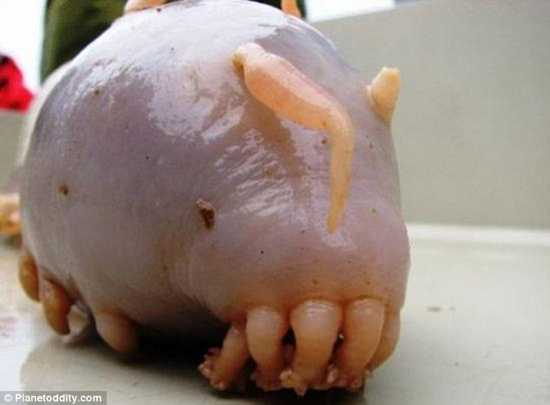 Sea pigs are sea creatures closely related to sea cucumbers, belonging to the kingdom Animalia. These aquatic organisms are about four inches in length, and have 10 tentacles with tub like feet that are used not for swimming, but for marching along the ocean floor. Sea pigs are bottom feeders and detect food by scent; they remove organic particles from the mud with their deflating and inflating tentacles and eat the particles trapped in their tentacles. These sea creatures obtained their name from their pink-tint and chubby body, do not fall short of idiosyncrasy. 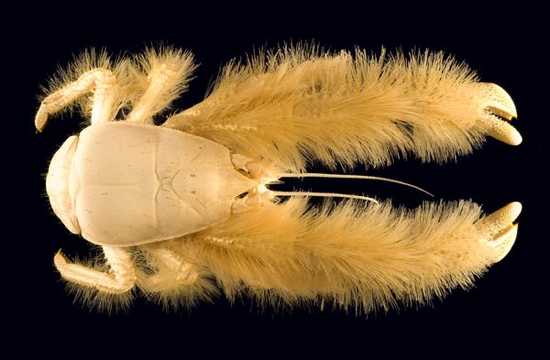 The yeti crab was only discovered in 2005 by Marine biologists in the Pacific Ocean. This organism resembles the mythical organism yeti with its hair-like sinuous, and resides in the hydrothermal vents of the pacific ocean that protrude a toxic liquid that to the average organism would be deadly. This organism is not well-researched yet, but its albino-like eyes suggest that the organism may be blind and it is suspected to feed off of the toxic minerals from the hydrothermal vents. 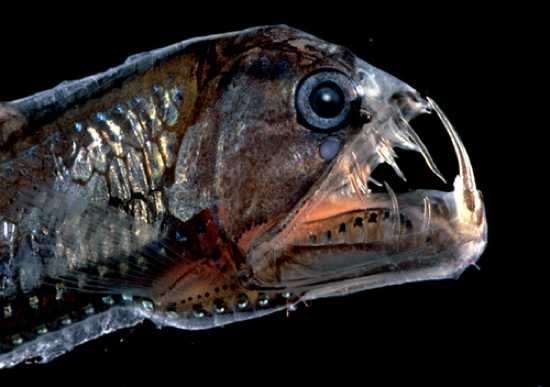 The viperfish, which can easily be recognized from the Disney film “Finding Nemo” with its hinged lower-jaw containing long stringy, pointy teeth, is a deepwater fish that lives in tropical and temperate waters. The viperfish varies from 12 to 24 inches in length and swims in depths from 250 to 5,000 feet. Although the viperfish is frightening in appearance, it is preyed on by sharks and even dolphins! This fish can live up to 40 years and holds the Guinness world record for largest teeth in comparison to head size in a fish. 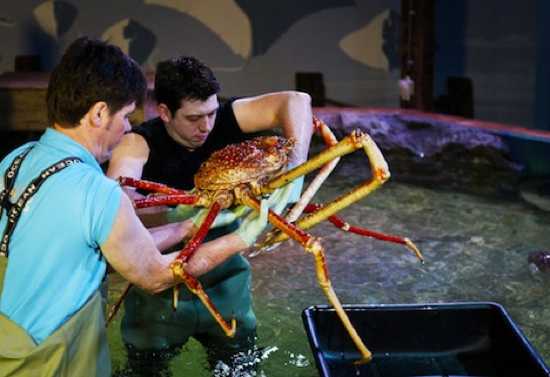 This marine crab is the biggest arthropod in the word in overall size containing eight legs. The Japanese spider crab is found about 150-800 meters deep off the southern coasts of the Japanese island Honshu and has a leg span of 3.6 meters. This crab can live up to a miraculous 100 years and are known to be calm animals. The Japanese spider crab feeds off animal carcasses, plants and shellfish; they could be considered the vulture of the sea. 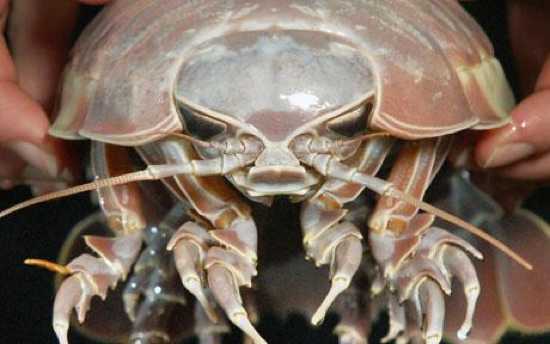 The giant isopod, a crustacean living in the Atlantic Ocean, is an alien-looking sea creature that exists in the pitch darkness of the bathypelagic zone in depths as deep as 7,020 feet. This interesting organism has stayed relatively the same for the past 130 million years! The giant isopod can be up to 14 inches in length and up to 30 inches in height and have four sets of jaws. The giant isopod is a scavenger that feeds with its four sets of jaws, on dead whales, fish, and squid. This organism has the ability to survive without food for more than eight weeks! 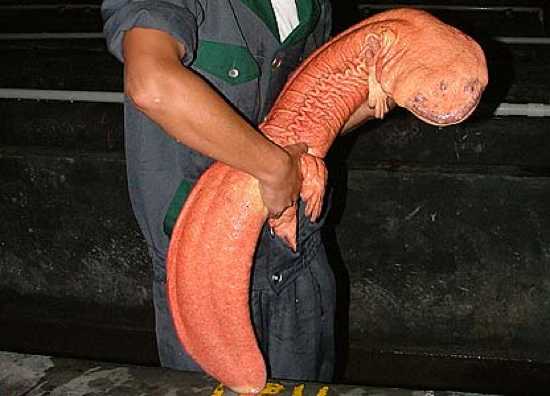 The Chinese giant salamander has stayed almost exactly the same in resemblance as its ancestors of 30 million years. This organism is the largest known salamander in existence and its habitats include mountain streams and lakes of China. This salamander can grow up to 73 inches in length and have lived up to 80 years at a time. The Giant Salamander does not have eyelids, and therefore has poor vision and rely on sensory nodes to detect possible vibrations made by predators. This amphibian has the ability to breathe through the pores and wrinkles in the skin and is mainly a nocturnal animal that hunts during the night feeding on crabs, crayfish, fish, frogs, insects, shrimps, snails and worms. 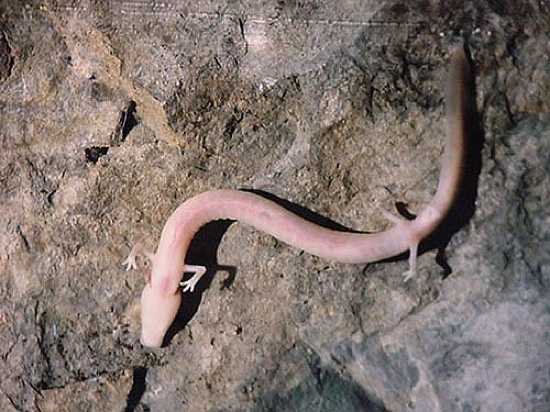 This proteus, aquatic, snake-like amphibian is a blind organism that lives in the caves of the subterranean waters. The Olm is about 8-12 inches and the small fragile superior limbs contain three fingers and the inferior limbs containing two. The olm’s skin resembles the color and texture of humans and is sometimes recognized as the “human fish” for its skin. The olm has not only external gills but also has lungs that are rarely actually used during the respiratory process. Due to their eyes that lay deep beneath the dermis and only somewhat detect light, the olm is dependent on their acute sense of smell and hearing abilities to survive. 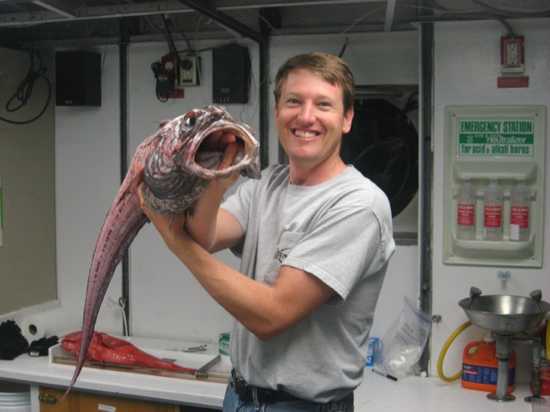 The giant grenadier is the only member of the Albatrossia genus that is found along the north Pacific part of Japan to the Okhotsk and Bering seas. This fish can reach up to seven feet in length and has been proven to live up to at least 56 years-old. The Giant Grenadier feeds mainly on different species of squids, crabs, worms, shrimps and echinoderms and is well known for its frightening resemblance to snakes with its long pointy tail and its large eyes. 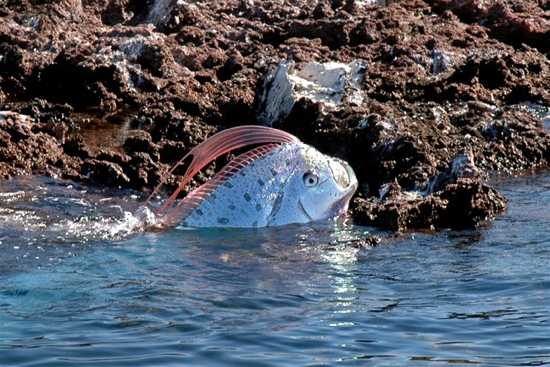 This fish, also known as the oarfish is the longest bony fish in existence. It is found in depths from 300-1000 meters in any of the world’s oceans. The king of Herrings remains in deep waters and does not surface often; typically if it surfaces, it dies when doing so. This 16 foot long fish was first discovered washed up dead on the shore in Bermuda in 1860. It is believed by scientists that the great myth of a sea serpent could have branched off of a king of herrings sighting. Despite that, this organism is a fish, it does not have any scales and although frightening in size, is not a threat to the human race based on its small teeth and one dorsal fin. 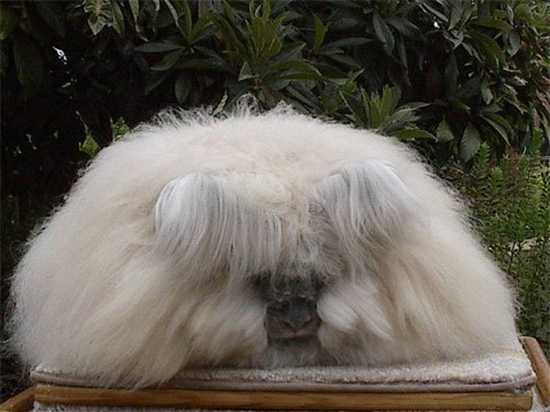 This cuddly creature is a domestic rabbit bred for long and soft wool. They originate from Angora, Turkey, are affable companions for those looking for a pet, and live up to seven years when well taken care of. There are five types of Angora rabbit breeds including English, German, Giant, French and Satin. The Angora rabbit can be up to 12 pounds and in spite of their large fluffy appearance, are very active creatures.