Squirrels make cute cartoons and plush dolls. However, the real rodents glow pink, delay flights and get arrested. They gather mysteries like nuts; squirrel breeders are succumbing to a new virus and there was that purple creature nobody could explain. A dead squirrel was once purchased as art and the Prince of Wales wants to fight them with a sandwich spread. 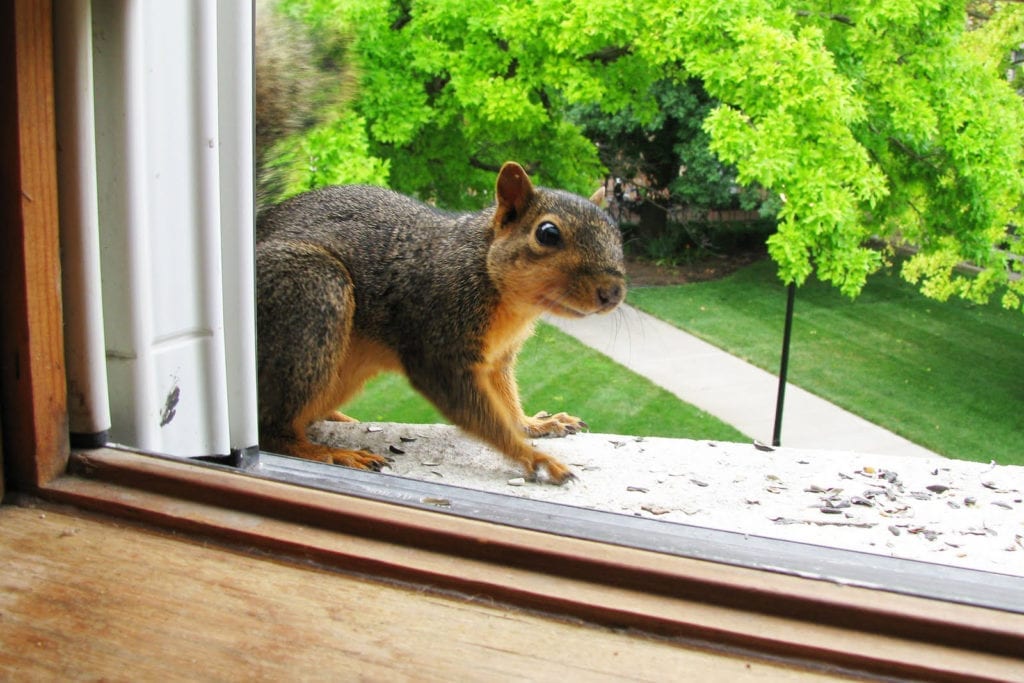 In 2014, a magistrate woke up to noises in her home in Hartlepool.[1] Since the alarm was also screaming, the 64-year-old Margaret Bousfield assumed the worst. Instead of a burglar, she found a squirrel. It was covered in soot, which suggested the critter had entered the house through the chimney. However, the squirrel was desperate to leave. If the living room’s damage was anything to go by, it had been trying to escape for hours. By the time Margaret woke up, the creature had demolished sofas, carpets, curtains, and the window frames. She called a neighbor who opened a window and the squirrel made a speedy exit. The carpets and one sofa had to be replaced. The total damage, all else included, racked up a bill of over £7,000. It was a dark day for the insurance company (who paid).

9 They Glean Safety Levels From Birds 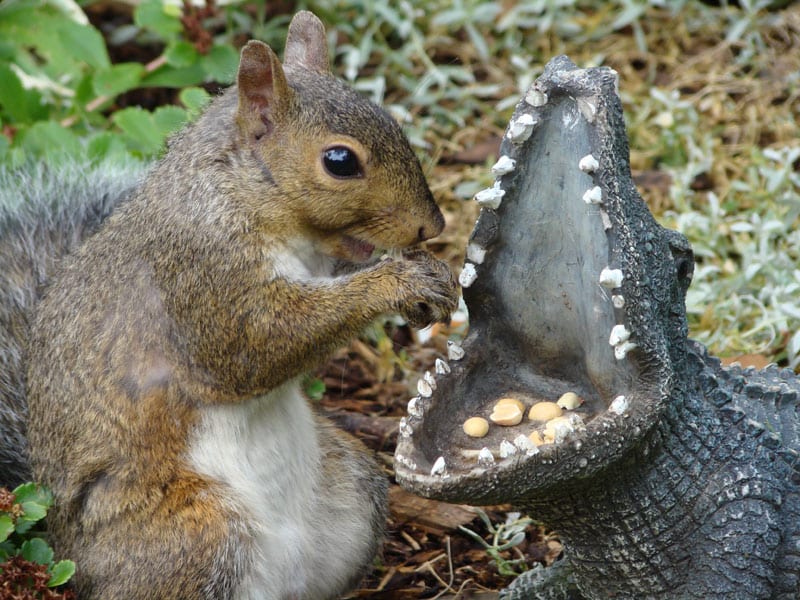 Birds tend to go wild when they see a predator.[2] Other prey species, like squirrels, have learned to hide when bird calls get uptight, even when they themselves do not know where the danger is coming from. This is old news. In 2019, researchers wondered if things went the other way. Do squirrels rely on birds to tell them when it is safe to come out again? To find out, scientists cycled through parks in Ohio until they found the perfect test subjects. A bunch of eastern gray squirrels. Around 54 were chosen to listen to recordings of a red-tailed hawk, a predator that likes squirrel pie. After the hawk cries, the rodents were exposed to either background sounds or songbirds engaged in casual chatter. The latter is very different from “all clear” calls, which were left out of the study. Once the audio part was over, each squirrel’s body language was studied for three minutes. Things indeed went the other way. The squirrels that heard bird chatter after the hawk came out of hiding sooner. 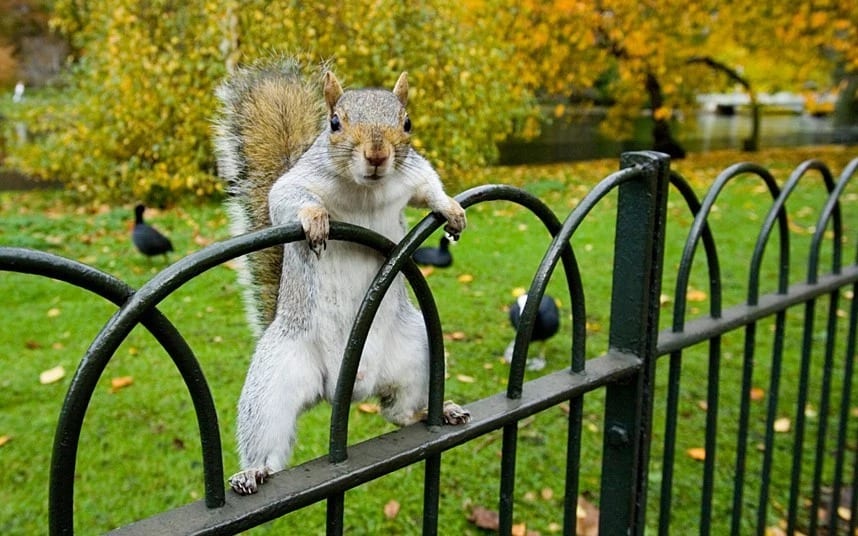 In 2014, a study looked at how urban squirrels adapted to city life.[3] Their rural cousins scurry for safety whenever a person approaches. To them, humans are predators. The study found that city squirrels viewed people differently. In fact, they behaved like New Yorkers. People living in a city with 8 million others are experts on how to avoid contact, even in crowded areas like the sidewalk or subway. The squirrels being studied were Eastern grays and lived in Manhattan’s busy Lower East Side. Just like the city’s people, the squirrels ignored most things on two legs. It would appear that they no longer view humans as true predators. While the rodents have lost most of their fear and even allow people close to them, the study found that they did not like being stared at. That and other small threatening cues made them run away. To live fearlessly alongside humans but knowing when to avoid them is crucial for any species trying to survive in an urban setting. The New York squirrels aced it. 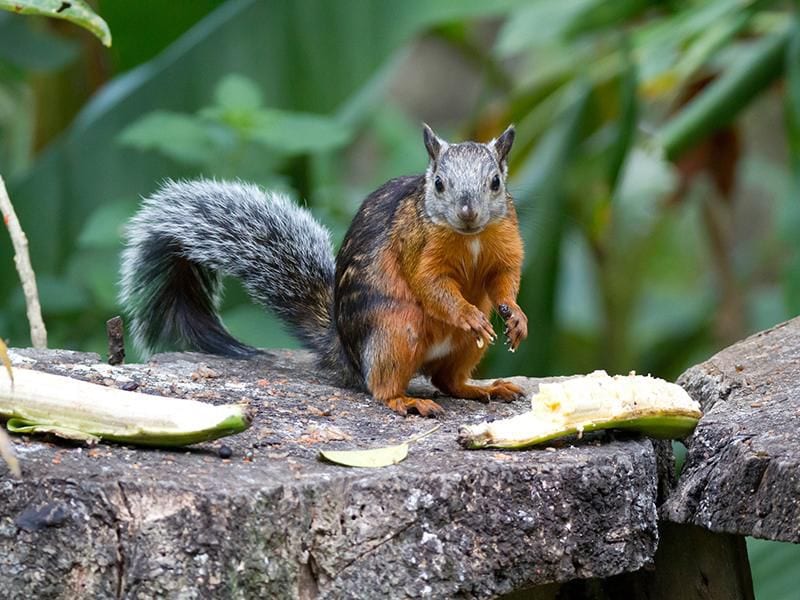 Brain inflammation (encephalitis) happen for a variety of reasons.[4] However, when three men died of acute encephalitis, none of the usual suspects were detected. The victims had something in common. They were all from Germany and bred an exotic species of squirrel native to Latin America. Although they lived in different areas, the men would meet to talk and trade the variegated squirrels (Sciurus variegatoides). The hobby turned deadly. Between 2011 and 2013, the breeders all showed symptoms of brain inflammation, slipped into a coma and died. Confused by the lack of the usual causes, doctors did not find out about the squirrels until further tests found a virus that belonged to the borna cluster of pathogens, a group known to exist in mammals, and for its habit of jumping between species. It was only a matter of time before the patients’ hobby surfaced and the squirrels were tested. One tested positive for VSBV-1, the virus found in the men’s brains. Nobody knows where the virus comes from nor how the animal and men were infected. 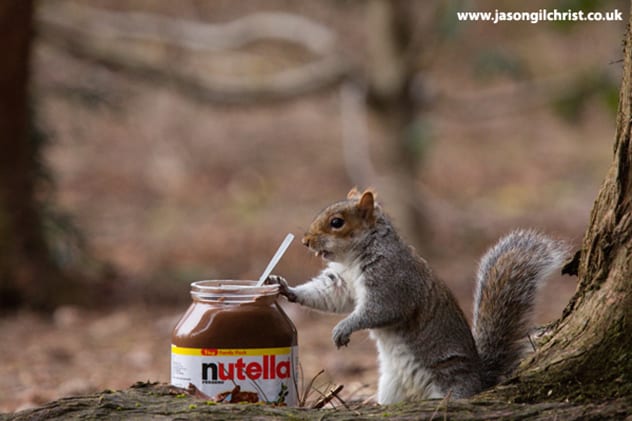 It sounds like a bad joke.[5] Hey, did you hear that Prince Charles wants to feed squirrels Nutella as a contraceptive? True story. The royal is such a fan of the British Isles’ red squirrel, he had admitted to wanting one as a pet. However, the creature is facing its doom in another squirrel species. Around 140 years ago, the Eastern Gray from North America found its way to the Isles. They proved to be fierce competition for the reds but also arrived with a disease (Parapoxvirus). The pox reduced the native squirrels to a mere 135,000 animals. To give the red population a helping hand, the Prince of Wales hosted a meeting between squirrel experts and officially backed a strange plan in 2017. The Animal and Plant Health Agency suggested the use of traps only gray squirrels could enter. Once inside, the critters will be treated to globs of Nutella. The sandwich spread will contain GonaCon, a contraceptive that dropped fertility in rats by 90 percent.

5 A Support Squirrel Delayed A Flight 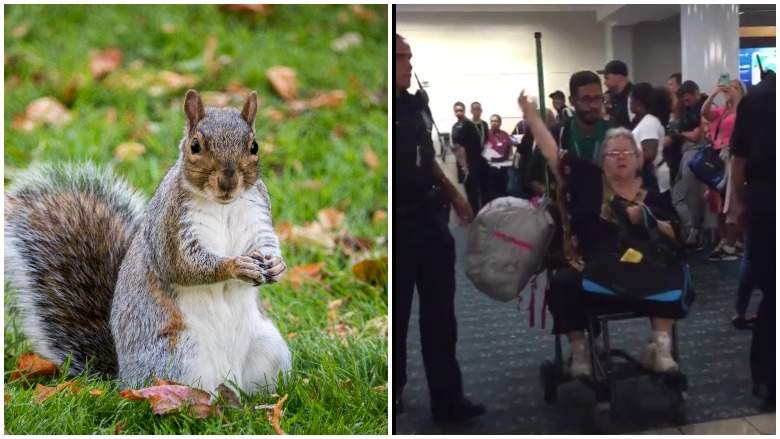 Emotional support animals can serve a great purpose.[6] They can bring comfort and companionship to people suffering from emotional or physical issues. When unconventional species make the cut, things get weird. Early in 2018, a “support peacock” and his owner were not allowed to board an airplane. Later the same year, a similar scenario happened but this time the animal was already onboard. The squirrel was with its owner who had booked a flight from Orlando to Cleveland. When the staff found out about the rodent, the woman was asked to leave the plane. She refused. The cops arrived. Things got so hairy that the rest of the passengers had to disembark and stay outside for two hours. The owner argued that she had told Frontier Airlines beforehand about bringing a support animal. However, apparently she never mentioned it was a squirrel and rodents are not allowed on Frontier’s planes. In the end, both the woman and her squirrel lost and were escorted by the police off the aircraft.

4 Police Took A Squirrel Into Custody 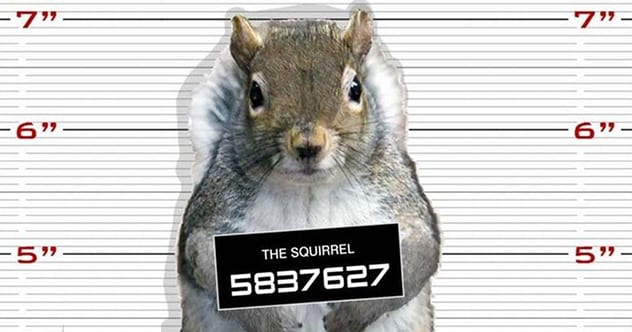 In 2018, emergency services in Germany received a call.[7] A man in Karlsruhe said he needed help because a baby squirrel was chasing him with great interest down the street. He was not kidding. The police arrived and found the caller still unable to shake off the rodent’s hot pursuit. The exhausted squirrel suddenly curled up and went to sleep. The panicked man went unnamed for obvious reasons but the officers decided to call the snoozing baby Karl-Friedrich. After they rescued the victim, the squirrel was taken into custody to become a police mascot before being taken to an animal rescue center. The baby squirrel was not psychotic or a little on the weird side. A police spokeswoman explained that when they become separated from their mothers, young squirrels could become fixated on a person as a substitute parent. In fact, when the cops took Karl-Friedrich to the shelter, the center had already received two other baby squirrels on the same day – and they also tried to adopt unwilling human parents. 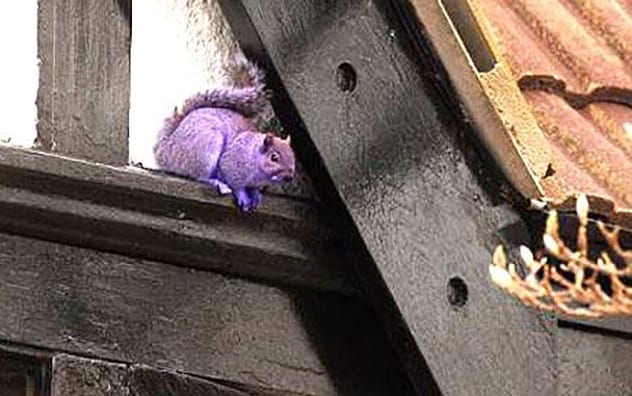 Squirrel experts know a lot about their favorite rodent.[8] However, nobody could explain Pete. In 2008, this squirrel attended the Meoncross School in Stubbington. Under normal circumstances, he might have gone unnoticed but it is difficult not to see a bright purple animal. Dubbed Pete by staff and pupils, nobody could explain why the normally gray animal looked that way, nor the even distribution of the color. Blotches would have suggested the squirrel encountered paint or dye, but it was like Pete was born purple. As stumped as they were, the experts were sure of one thing. He was not a mutant and there was nothing natural about it. Squirrels nibble on anything, even non-organic stuff. Keeping this in mind, Pete liked to visit an old building near the school where old computer printers were stored. He might have gnawed on a purple cartridge and groomed the ink through his fur. However, it must have been the most thorough grooming in history to even out the color so well. 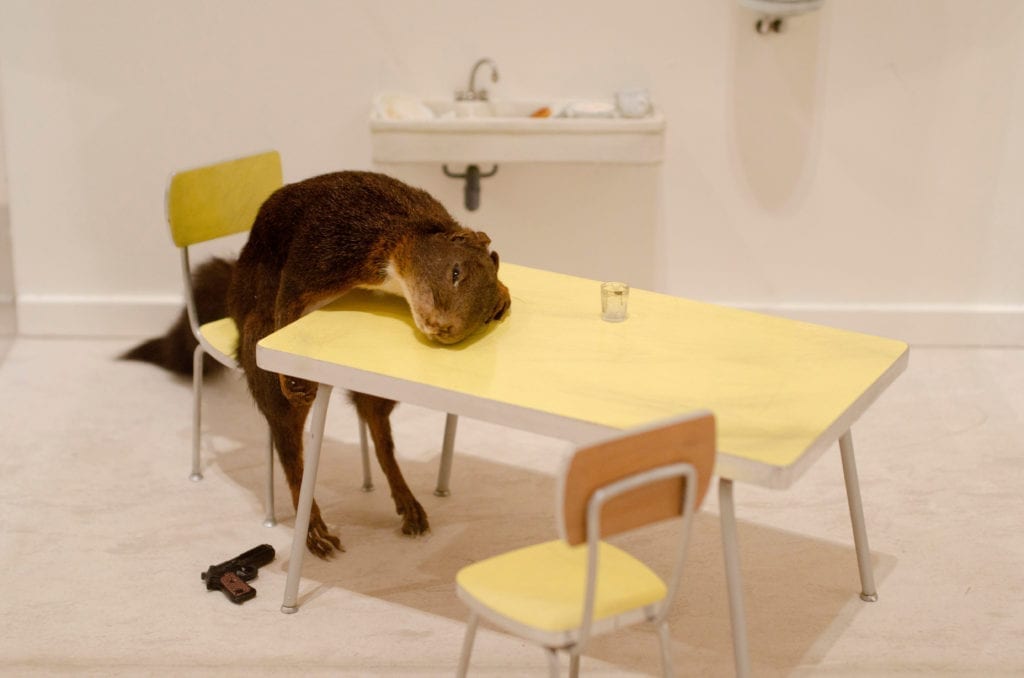 Maurizio Cattelan is an Italian artist with a flair for controversial humor.[9] Among his most famous work is a piece depicting a meteor hitting the Pope. In 2012, Whitechapel Gallery hosted a Cattelan exhibition. The center-stage feature, for some reason, showed a dead squirrel that may or may not have committed suicide. The stuffed creature was slumped over a table with a tiny pistol on the floor, surrounded by a dirty kitchen and signs of drinking – as if he had long since stopped trying to live. The work’s name was Bidibidobidiboo, the spell used by the Fairy Godmother to make Cinderella look great and snag a prince. The title was ironic, suggesting that not even magic could transform this squirrel’s bad life. If you think nobody would buy a dead rodent at a tiny Formica table, think again. The work was purchased 6 years prior to the exhibition and was on loan from its owner, Patrizia Sandretto Re Rebaudengo, an avid Cattelan collector. 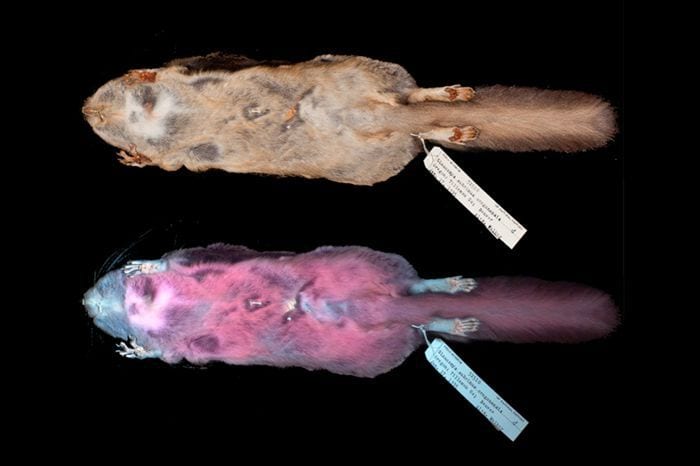 In 2019, a professor shone an ultraviolet torch at a squirrel in Wisconsin.[10] The flying squirrel glided away and its color was startling. Under the ultraviolet light, the animal’s fur glowed fluorescent pink. As weird as that was, the moment was significant. Fluorescence is well-known in other corners of the animal kingdom. Reptiles, birds, and arachnids all have species that shimmer. In mammals, however, only opossums from the Didelphidae family have this trait. To discover whether the squirrel was a fluke, researchers descended upon the Field Museum in Chicago and the Science Museum of Minnesota. They pointed ultraviolet light at 135 specimens belonging to different species. Only three types of flying squirrels from the Glaucomys genus turned pink. A clue to the unusual fur could be a characteristic they share with opossums. Both are nocturnal. Non-flying squirrels tend to be day creatures. It is plausible that the glow helps the Glaucomys clan to deal with their low-light environment, including camouflage, communication, and navigation.