Films and literature are full of those wicked characters who act against the protagonist and other good-natured people. Most stories need at least one character with evil deeds and intentions behind their name to make the story worthwhile. Nonetheless, in the end, the villain invariably faces retribution and the hero is saved. In this list we will discuss some of the nastiest baddies who have tormented both pages and screens and discuss how they met their demise, for the focus of this list, in the form of taking a tumble.

10
The Queen
Snow White and the Seven Dwarves 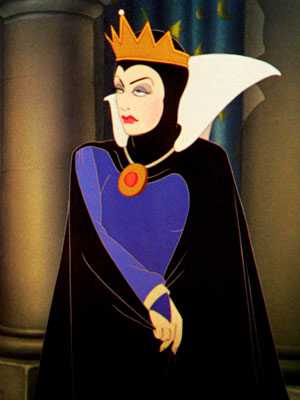 This jealous Queen has had her beauty washed away by years of aging, and now her stepdaughter, Snow White, is the fairest in the land. Angered by her magic mirror that has brought her this news, she sends her huntsman to kill Snow White. After he cannot find the heart to harm the beautiful young princess, the Queen takes on a peddler’s disguise and offers Snow White a poisoned apple. Snow White falls into a sleeping death, but her prince, and true love, kisses her on the lips and Snow White awakens. When the Queen intends to drop a boulder off a cliff on Snow White, the boulder crumbles into many tiny pieces and the Queen falls off the cliff to her death, where vultures devour her. 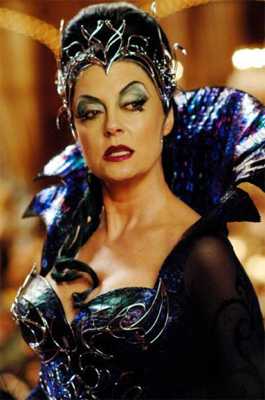 This queen is much like the one from Snow White. She sends Gizelle via a waterfall to New York City away from her love, a prince. The Queen is jealous of Gizelle’s beauty and wants her dead. Gizelle’s prince, Edward, journeys down the waterfall to find Gizelle. It turns out that Gizelle falls in love with a divorced father of a young girl and Edward falls for the man’s fiancee. It is proven that this father is Gizelle’s true love as he awakens her from the sleeping death from the Queen’s poisoned apple, whereas Edward’s kiss did not awaken her. Nonetheless, the Queen transforms into a dragon and chases Gizelle to the top of the empire state building, but she slips, breaks her wings and falls to the ground.

8
Gaston
Beauty and the Beast 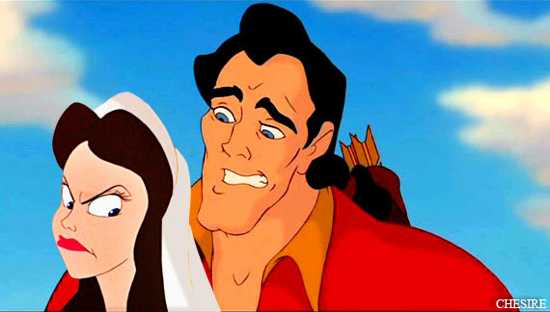 Gaston feels he is in love with Belle, a beautiful young woman who is regarded by the villagers as strange. Belle spends most of her time reading and her father is an inventor whose inventions never work. Nonetheless, Gaston feels attracted to her beauty and feels the need to woo and marry her. When Belle’s father gets lost, he finds himself at the Beast’s Castle. Belle’s horse takes her to find her father. The Beast sends Belle’s father away, but slowly grows to care for Belle, who has agreed to stay at the castle, in place of her father. The Beast releases Belle when she sees that her father is unwell. Gaston calls Belle’s father a lunatic for claiming to have seen the Beast. To prove him wrong, Belle shows Gaston the Beast with his enchanted mirror. Gaston resolves to kill the beast. After a great fight at the castle, Gaston falls from the roof. Belle admits to loving the Beast and he changes back into a prince. 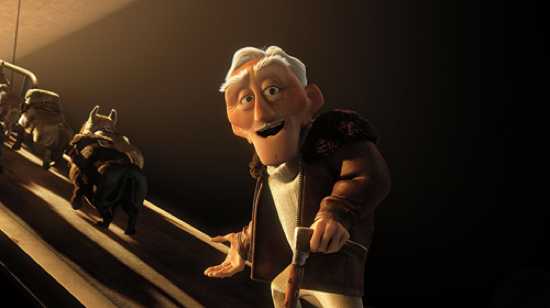 A great example of a famous explorer turned madman, Muntz journeyed to Paradise Falls in his youth and brought back the skeleton of a giant, fabled bird. His colleagues thought the skeleton was fake, grew angry with him, and stripped him of his scientific awards. He promised to return to Paradise Falls to bring back a live specimen. 70 years of searching and tracking with dogs almost paid off, and would have if it was not for Carl Frederickson (an elderly widower who had dreamed of visiting Paradise Falls since boyhood) and stow-away Russell (a child wilderness enthusiast), both of whom were traveling in a balloon-hoisted house. They found the bird, and Russell called her Kevin. Muntz uses various wicked tactics at capturing Kevin, such as driving his dogs after Carl and Russell and trying to push Russell off his blimp in a chair. In the end, however, Muntz falls from his blimp into the jungle below, never to be seen again. 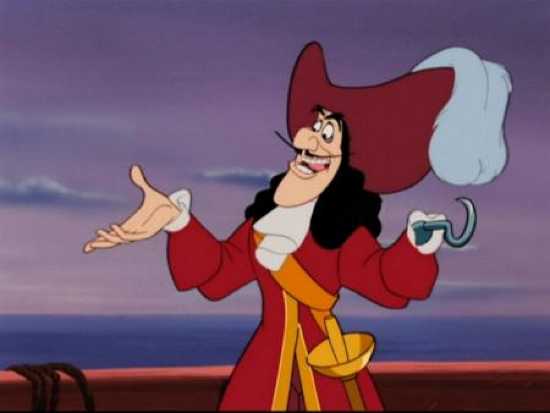 Captain Hook was a pirate who wanted to slay Peter Pan, the boy who would never grow up, and capture Wendy, the girl he took to live with him in Never Land. Hook was so evil he shot members of his own crew if they ever disagreed with him and tried to drown Wendy’s brothers. At the same time, there was a crocodile who had bitten off Captain Hook’s hand (hence the hook) and wanted to eat the rest of him. After the croc found Hook, Hook tried to fly away like Peter Pan by thinking happy thoughts, but, in the end, despair overtook Hook and he fell into the crocodile’s mouth. 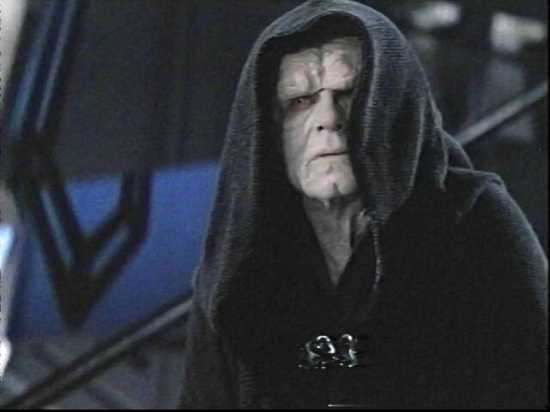 Many believe Darth Vader to be the main villain in Star Wars, but perhaps the real villain deserving of first prize would be Emperor Palpatine, his master. Palpatine manipulated Anakin (the future Vader) since he was a boy to turn against the Jedi and join the Dark Side. Palpatine was successful until he decided to turn Vader’s son, Luke, to the Dark Side. When Luke refused, Palpatine unleashed lightning on the young Jedi intending to kill him. Vader, unable to see his son destroyed, turned on his master and threw him down the shaft of the Death Star, where the Emperor was vanquished. 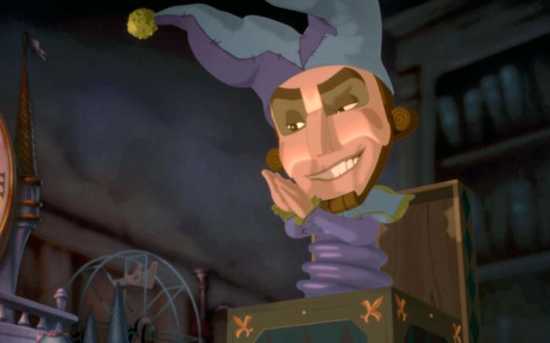 3
Gollum
The Lord of the Rings 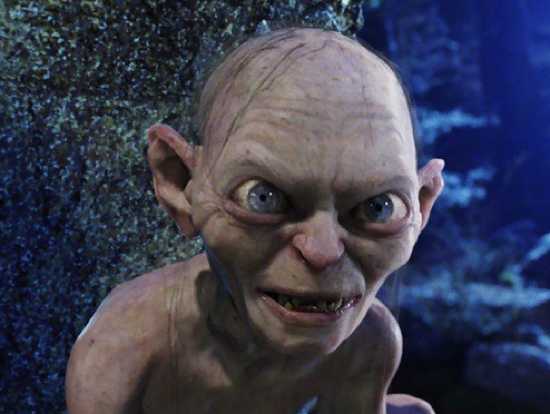 Maybe a bit of a victimized villain, but a villain nonetheless. Smaegol (the former Gollum) and his cousin find the ring while fishing in a lake, Smaegol kills his cousin and the ring corrupts him. Bilbo, the Hobbit, steals the ring and Gollum wants his “precious” back. Gollum meets Frodo, Bilbo’s nephew, whilst Frodo is on his quest to destroy the one ring of power. Gollum pretends to “swear on the precious” to lead Frodo on his quest to destroy the ring, when all Gollum really wants is to kill the young hobbit and take the ring back for himself. Frodo survives Gollum’s clever scheme to have him killed by spider Shilob, and proceeds to the Crack of Doom to throw the ring into the fire. Frodo succumbs to the ring’s power and decides to keep the ring, but Gollum bites off Frodo’s finger, and after an aggressive fight with Frodo, falls into the fire himself. Frodo is remembered as the hero who saved Middle Earth.

2
Bishop Waleran
Pillars of the Earth 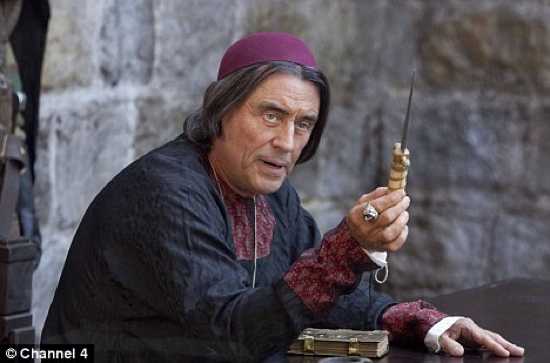 Probably the nastiest bishop you ever saw in twelfth century England. He poisoned the former bishop to make himself bishop and has Lady Regan Hamley kill the archbishop of Canterbury so he could become Archbishop. With the Hamleys (other villains) under his wing, they corrupted the church to take control. They impeded Tom Builder’s attempt to build a new Cathedral after the old church burned down. After framing Jack, Tom’s assistant, for the murder of Tom’s son, Jack’s mother presented irrefutable testimony against the bishop. Bishop Waleran climbed to the top of Jack’s newly build cathedral but fell from the roof after the audience of the trial pursued him. Prior Philip said “Ego the absolve” (I absolve you), but the Bishop just spat blood in Philip’s face and died. 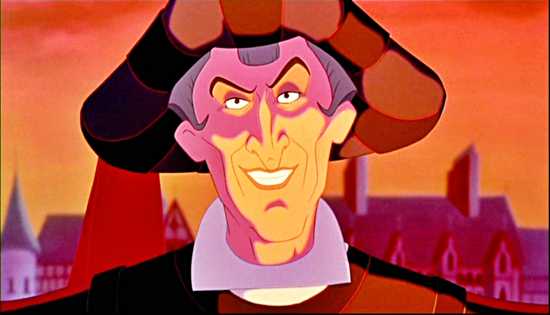 The Hunchback, Quasimodo, from 15th century Paris, was a bell ringer that Frollo would never let leave the tower because of the hunchback’s disfigured appearance. One day, Quasimodo decided to disobey his master, and, despite much laughing and jeering from the villagers, met Esmeralda, and was immediately attracted to her. Frollo noticed Esmeralda, and wanted her as his own and had Quasimodo bring her to him. Quasimodo attempts to do so, but Frollo’s guards accuse him of kidnapping. Quasimodo is sentenced to pillory, but Esmeralda feels sorry for him when she sees him and gives him water. Frollo later sees Esmeralda making love with Phoebus and tries to kill him. The guards falsely accuse Esmeralda of the crime and sentence her to be hanged. Frollo says he will spare Esmeralda if she says she loves him, but she refuses. Quasimodo saves her from the hanging and pushes Frollo from the tower into molten copper. Quasimodo and Esmeralda confirm their love in the castle’s secret chamber.