Humans have always been attracted to nature. Being the curious species that we are, we tend to love to wander in the great outdoors and enjoy the beauty of nature (even if we’re just viewing pictures taken on the hikes of others). Many people love to be out and about, exploring different parts of the world. These adventurers often end up in strange, unusual, and even precarious situations, but that’s the price you pay for the freedom to roam and appreciate the dazzling sights the world has to offer.

Sometimes, when hiking on volcanoes, people somehow end up inside. In the case of active volcanoes, the terrifying, molten lava is enough to scare most people away from the site for good. Falling into an inactive or dormant volcano is no joke, either, as volcanic craters can be thousands of feet deep. Here are ten such people who either fell or jumped—yes, jumped—into a volcano. 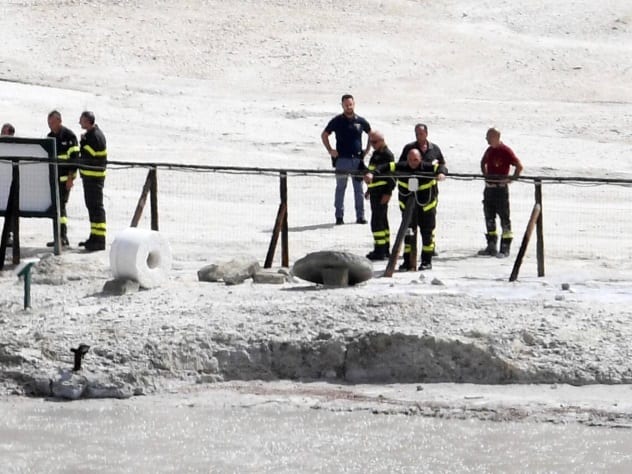 Solfatara is a sulfurous volcanic crater near Pozzuoli, Italy, and is often a tourist destination for people who want to catch a glimpse of a beautiful sight. While the volcano is dormant and hasn’t erupted since 1198, it’s still quite hot, with magma beneath its surface and boiling sulfur inside of it.

In September 2017, a family of four, a couple and their two sons, went to see the attraction.[1] Then, the older brother, age 11, slipped and and fell into a hole that cracked beneath his feet. The parents, frantic, tried to save their son, but they, too, fell into the hole after tragically being overcome by the sulfuric fumes and losing consciousness. The younger brother, seven years old, managed to escape to safety and survive the traumatic experience. 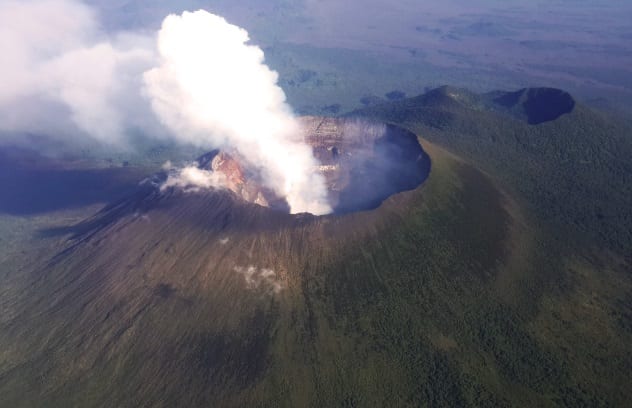 The Nyiragongo volcano is located in Africa’s Virunga National Park, which lies in the Democratic Republic of the Congo. In 2007, a 33-year-old woman from Hong Kong named Cecilia Cheng Siu-yan had climbed atop the towering volcano, which stands nearly 3,500 meters (11,500 ft) above sea level, when she accidentally got stuck on a ledge inside the volcano’s crater.[2] She finally fell into the massive, active volcano, which hasn’t erupted since 2002 and is known for containing a lava lake.

Rescue teams searched for the woman but weren’t able to determine if she had fallen onto the rocks which lie within or actually into the massive pool of lava itself. A helicopter was deployed, and a team made up of members of the Indian army as well as others all came together to search for the missing woman. They eventually found her lying on a bed of rock, having fallen 200 meters (656 ft). She was dead, and the team believed she died from the fall. 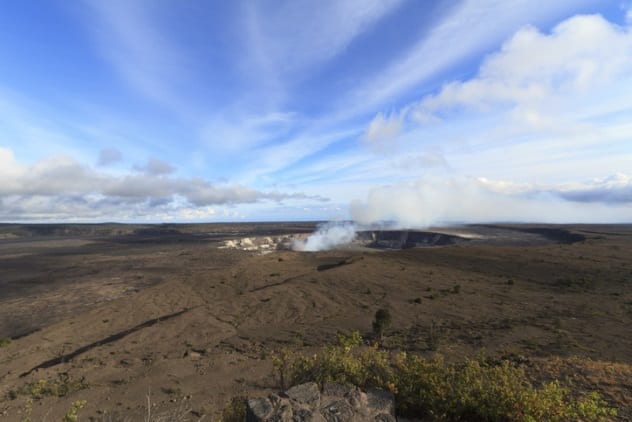 Leo Adonis, born Gregory Michael Ure, was a 38-year-old California man who met a similar, tragic fate—he died inside a volcano in 2017. The man loved Hawaii and climbed to the top of a volcano there before apparently falling inside. But he left behind his backpack, which was later found by hikers on the Crater Rim Trail after he had fallen.[3]

Inside the backpack, the hikers discovered something startling: a suicide note. Leo Adonis had chosen to die by jumping into the volcano. Investigations were conducted and concluded that the man did, in fact, commit suicide-by-volcano. He jumped to his death and landed on the outer rim of the volcano crater, rather than the lava itself. 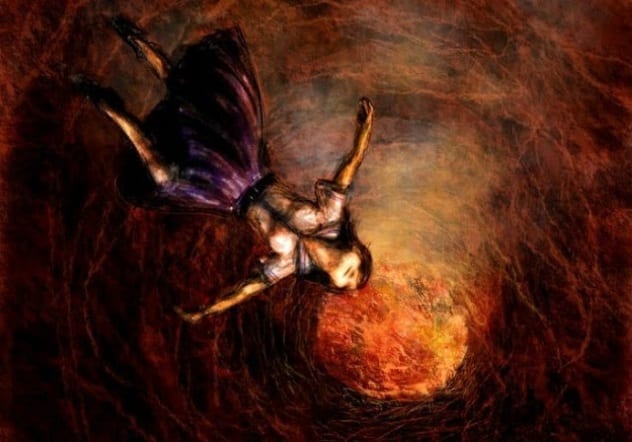 Mount Mihara is a volcano on a small island in Japan called Izu Oshima, and it has an extremely unusual backstory: The volcano was used extensively for suicide in the early part of the 20th century, much like Japan’s suicide forest, both of which have been places where thousands of people have taken their own lives. Throughout much of the 1920s and 1930s, suicide fever seemed to catch on, with someone jumping into the volcano almost every single day during those two decades.

One young woman in particular named Kiyoko Matsumoto did just that on February 12, 1933. The poor girl had fallen in love with another girl from her school named Masako Tomita. Same-sex relationships were extremely frowned-upon in Japanese society at the time, and Kiyoko decided that she simply couldn’t live without the love of her life.

In a strange turn of events, since they couldn’t have one another, the two marched up the mountain together, and Kiyoko jumped into the volcano so that she would be burned alive in the lava.[4] 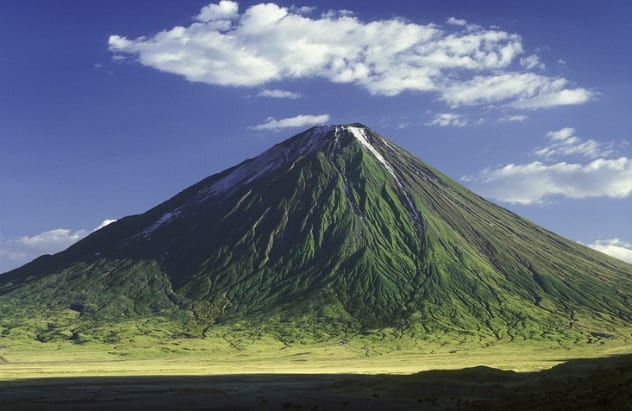 One instance of falling into a volcano happened to a poor man who was part of a group exploring Ol Doinyo Lengai, a bizarre and active volcano in Tanzania. The name “Ol Doinyo Lengai” means “Mountain of God” in the local language, Maasai.

Not all falling-into-a-volcano stories end the same; as we’ve seen, these incidents happen for vastly different reasons, and they also have extremely different outcomes. The unnamed man fell into the volcano—but amazingly, he survived![5] The date was August 21, 2007. A team was walking on the volcano, and a Maasai porter fell into a lava-filled crevice. His arms and legs were severely burned, but amazingly, the porter climbed out of the lava himself.

How did this man get so lucky and survive falling into lava? It has to do with Ol Doinyo Lengai’s unusual lava, which never goes above 510 degrees Celsius (950 °F), making it an extraordinarily cool volcano, though still hot by our standards, obviously. Such lava is usually a slow-moving, black, rolling, viscous liquid, rather than the bright red or orange, bursting, streaming, and flowing liquid we usually see. The man placed his pack down and stood on it until he was able to climb out of the thick, slow sludge and make it to safety. 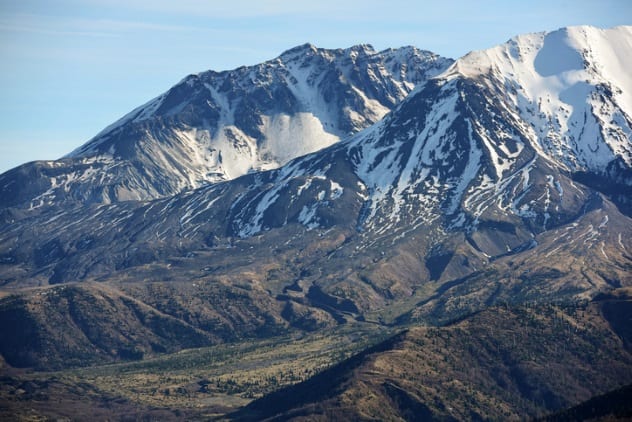 Mount St. Helens has been one of the most famous volcanoes in the United States, if not the world, since its eruption in 1980. In 2008, a 52-year-old man from the neighboring state of Oregon named John Slemp was snowmobiling near the volcano. His son had just returned from the war in Iraq, and the two decided to take a friend out to the volcano to cruise around on snowmobiles for a bit of fun. Then they decided to hike to the rim of the crater, but when they reached the top and walked over to the rim, a day of fun and games quickly fell apart, turning into a nightmare scenario—John Slemp fell into the volcano.

Slemp fell a total of 457 meters (1,500 ft) yet would miraculously survive. His descent was stopped by a snowbank after about 46 meters (150 ft), but then it crumbled, and he slid the rest of the way.[6] Help was called, and Slemp had to be rescued by a team with a helicopter. Medical technicians arrived on the scene within hours and were able to save the man’s life.

Canadian storm-chaser, adventurer, and explorer George Kourounis is an interesting character who’s been the star of several TV shows in which he thrusts himself into some pretty mind-blowing, crazy situations in the natural world. He and his wife even got married on the top of an active volcano—while it was erupting.

The things George has done are already crazy enough, but then he got the bright idea to descend 366 meters (1,200 ft) down inside a live, active, lava-filled volcano with a rope attached and two cameras. He had a Canon professional-grade camera and a GoPro and descended into the volcano, getting as close to the underbelly of this thing as he could.[7] He got so close that the heat from the lava ended up melting through a portion of his suit and part of one of the cameras. The stunt was all recorded and watched by his team, and Kourounis survived the expedition. 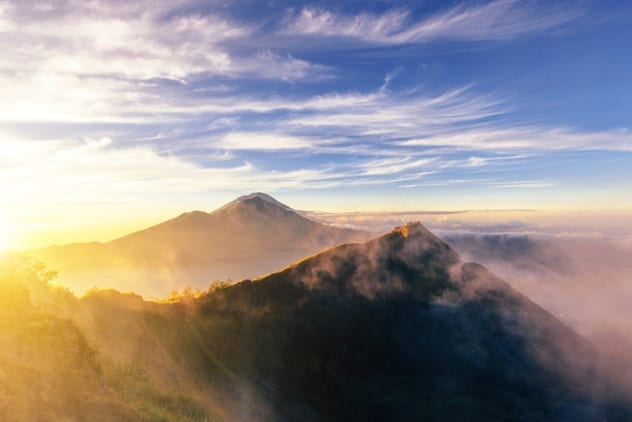 In March 2010, yet another man fell into a volcano, this time in Indonesia’s Mount Batur in Bali. The unnamed Swedish tourist was taking a hike up to the rim just before dawn, to catch the sunrise from the top of the active volcano, when suddenly, he fell in accidentally.[8] This poor backpacker was just going up to the top of the mountain to catch a beautiful sight and ended up being swallowed in the belly of a volcano.

The man fell about 150 meters (500 ft) and died instantly. Three friends had gone with him that morning, so it wasn’t a suicide, just a peaceful predawn hike to the mountaintop that went very, very wrong. The path the Swedish tourist was walking is actually considered extremely safe by the authorities who monitor the volcano, so this was just a tragic, freak accident. 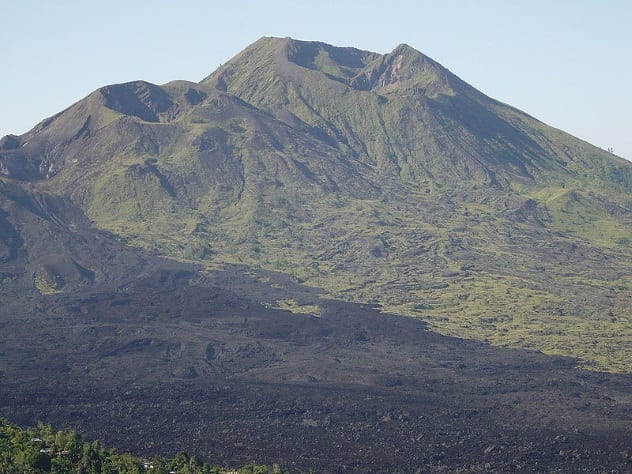 It was an enjoyable day on vacation in Bali for British firefighter John Conway. Eight years after the Swedish tourist had fallen to his death, Conway was enjoying his own hike on Mount Batur, when suddenly, a woman who was also hiking the volcano fell off a platform and into the crater. Fortunately, she only ended up falling 40 meters (131 ft) when she took the plunge accidentally, and John’s firefighter instincts sprung quickly into action.

He gathered some people nearby and came up with the genius idea of forming a human chain, arm-in-arm, to get down there and rescue the woman. The attempt was successful. John returned the unnamed woman to safety and used his firefighter training to keep her conscious and alive until help could come.[9] 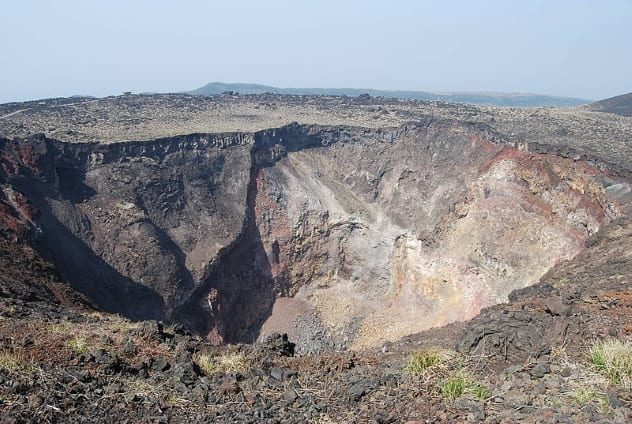 No list about people falling or jumping into volcanoes is complete without considering the thousands of lives that ended by suicide at Mount Mihara, which we’ve only briefly touched upon above. This active volcano has been used extensively for suicide over the years and has seen thousands upon thousands of people jump into it. It was even featured in one of the Godzilla movies as a place that Godzilla was imprisoned until the following sequel.

There’s a certain point on the volcano which is a perfect spot for people to jump into the crater, aptly called “Suicide Point.” In decades past, Suicide Point drew hundreds of people per year, all of whom wished to end their lives in one of the most bizarre and almost unfathomable ways possible—by jumping into a volcano.

In 1933 alone, 944 people committed suicide by jumping into Mount Mihara. The following years were still particularly haunting, as at least 350 more people jumped into the volcano between 1934 and 1935.[10] Eventually, to curb the mass of suicides that took place at this particular site, the Japanese authorities built fences and barriers to stop people from being able to so easily jump off Suicide Point and even made it outright illegal to purchase a one-way ticket to the island of Izu Oshima, on which the volcano is located.

Japan has a long, rich history with volcanoes, with one of them serving as an execution chamber in past centuries. Mount Unzen was used for the execution of criminals and Christian trespassers from the 17th to the 19th centuries, making Mount Unzen to execution what Mount Mihara is to suicide.

I like to write about the strange and unusual, dark stuff, true crime, and history.

Read about more unusual ways people died on 10 Bizarre Recent Stories Of Accidental Death and 10 Of The Weirdest Ways Kings And Queens Died.