Space may be the final frontier, but it is also one hell of a restaurant. Over the the past half-century, scientists and space engineers have not only been racing to get their rockets safely outside the Earth’s atmosphere, they’ve been working to ensure the menu keeps their astronauts coming back for more. While there have been all sorts of innovations and improvements, it seems now the options are better than ever, to where we might consider studying rocket science just to gain access to NASA’s kitchen. While these days it seems there is little hope in revisiting space any time soon, here are ten facts about space food, to give us food for thought as we wait until we can become weightless once more. 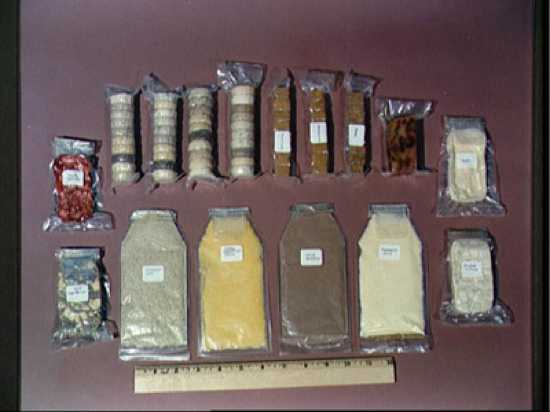 When Yuri Gagarin become the first human being to go into outer space, he also become the first to eat and do whatever else a human must as a necessary condition of survival. What he ate was stored in toothpaste-like tubes – for instance, his lunch consisted of a liquid paste and chocolate sauce. The first Americans in space – after effectively losing the first phase of the Space Race against the Russians – ate food in cubed, powder, and liquid form (which they really didn’t enjoy at all) and found re-hydrating the freeze-dried foods to be an unpleasant task. 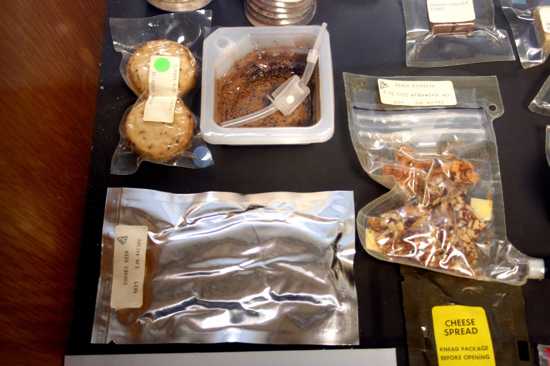 Eventually tubes were ousted and menus started containing food items, as well as a sense of consistency, that humans tend to enjoy. For 1965’s Project Gemini, freeze-drying methods improved and luxuries like shrimp cocktail, toast, chicken and vegetables, and pudding were offered. Astronauts even snuck corn beef sandwiches on board, though were later reprimanded when floating crumbs became an issue. In the Apollo Missions (68-75), hot water showed up, and on board the Skylab Space Station (73-74) was a refrigerator and freezer, which allowed for perishable items. Nowadays, anything that can be kept at room temperature can be eaten on board a spacecraft, including pasta, fruit, and other popular foods from home (wherever that might be – see below). 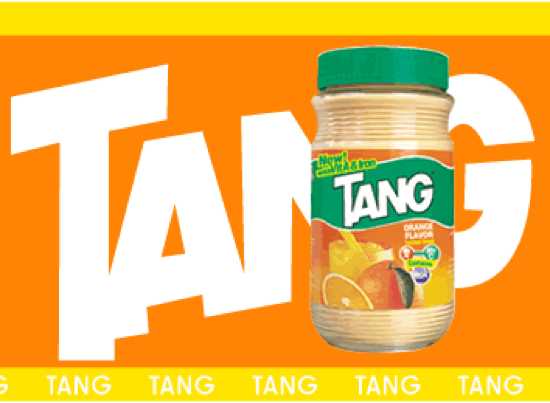 Fact: Tang Was Used in Space to Counter the Taste of Water on Board.

Contrary to a popular misconception, Tang was not developed for space travel, but using it in Space did help their sales. Actually, Tang was a natural choice, with its shelf life-enabling powdered consistency, but it was moreover preferred because the water on board the ship had a bad aftertaste (an innocuous byproduct of a chemical reaction in the life support systems), and this tangy little additive made hydration much more bearable. 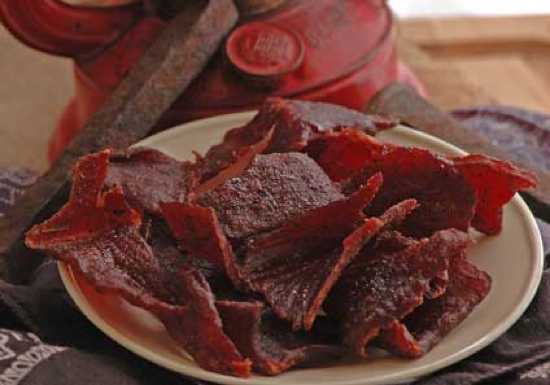 Fact: Jerky is Huge in Space.

Another natural fit for space missions is beef jerky (or that of any kind of meat really) – after all, it’s already dehydrated and portable, as well as highly nutritious. One Swedish astronaut named Christer Fuglesang brought on moose jerky – granted, these was after he was forbidden from bringing reindeer jerky, as Christmas was right around the corner. 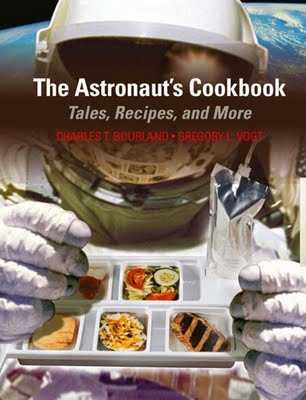 Fact: There are Different Classifications of Space Food.

They are: Beverages (dehydrated of course), Fresh Foods (food with a 2-day shelf life), Irradiated Meat (to keep it from spoiling), Intermediate Moisture (foods that won’t go bad as soon as fresh foods), Natural Form (nuts, cookies, granola bars, etc.), Re-hydratable Foods, and Thermostabilized (food that has been prepared with heat to kill off any possible spoiling agents). These terms are incredibly formal and technical and a great example of how the government insists on making complex something as simple as eating. 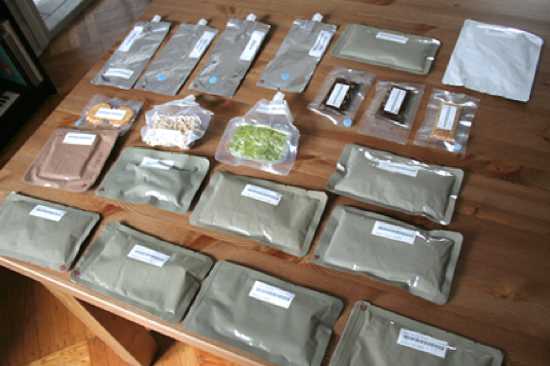 Fact: Food Must be Packaged a Certain Way.

The way a piece of space food is packaged needs to fit certain criteria – aside from basically preserving the food, the packaging must be lightweight, disposable, and useful in how the item is consumed (as well as contain preparation instructions and a bar code, to track the diet of each astronaut). These reasons are largely due to the necessity of accounting for how much space and weight is taken up aboard the ship, as every last pound requires that much more rocket fuel (so less is always more). As for the part about being useful in how an item is consumed, in the Russian space program, cans and tins are used to store food, as well as for heating it up while still in the original container itself. 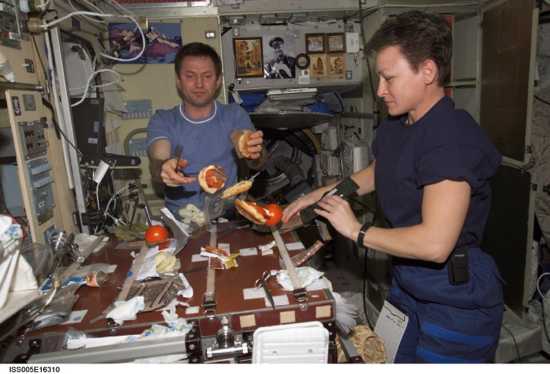 Fact: Food Must be Made a Certain Way.

Food must be nutritional, easy to digest, and palatable (we saw how that posed a conflict in early space missions). The food must also be made for the purposes of a zero gravity environment; it must be light, sealed properly, and quick/easy to prepare/clean up after. 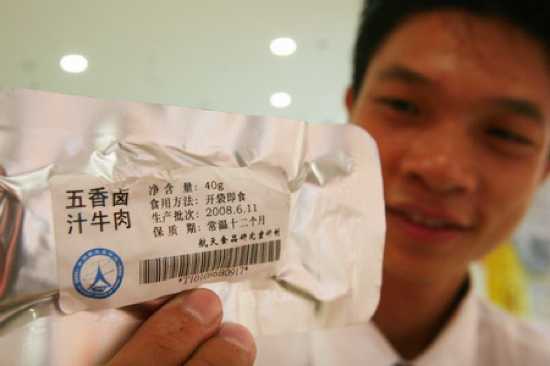 Fact: There is Cultural Diversity in Space Food.

Every country – which goes into space that is – brings the food they are accustomed to. When China entered orbit in 2003 for the first time, Yang Liwei brought yuxiang pork, Kung Pao chicken, rice, and Chinese herbal tea. Russia brings such foods as borsch, goulash, curds and nuts. Japan brings sushi, ramen, yokan, and rice with ume. 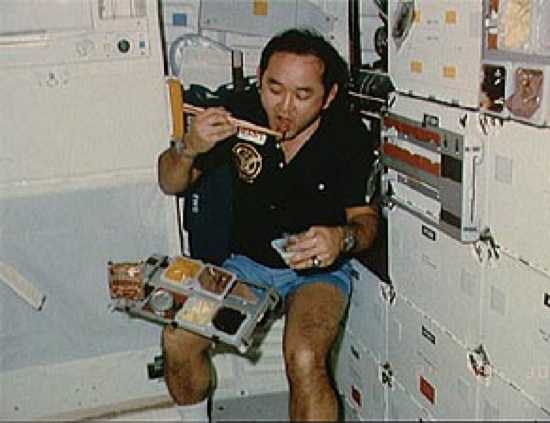 Fact: You Can Still Swallow Food in Zero Gravity.

This is something John Glenn was afraid of when he became the first American to enter space in 1962. But rest assured when he got there, he could eat. Gravity does not affect swallowing due to a process called peristalsis in the esophagus, where the contraction and swelling of throat muscles are what guide food to its destination, rather than gravity. In that way, it almost seems like we were born to go into space. 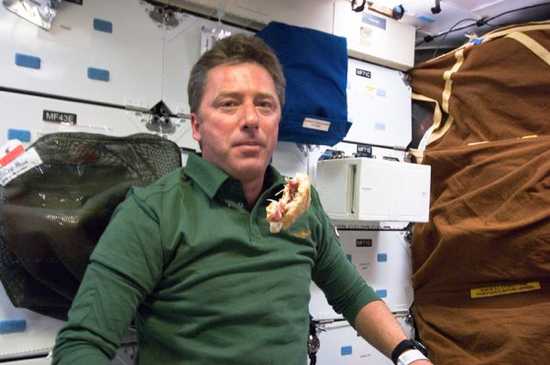 Fact: Lack of Gravity Affects the Senses and Digestion Process.

With a loss of gravity also comes a loss in senses, particularly taste and smell (due to head congestion), which alters how food is enjoyed in space, and also making spicy foods more appealing. In addition, when drinking carbonated beverages, liquids and gases separate in the stomach, which results in wet burps. To counter these effects, beer and Coke/Pepsi have been engineered in several instances to maximize their enjoyments while in space.