Reflecting on many aspects of Houdini’s life from beginning to end, this list will reveal that not only was he the greatest showman ever, but one of the most remarkable personalities the world has ever known too. “It is still an open question, however, as to what extent exposure really injures a performer.” -Harry Houdini.

10
The Man with Many Names 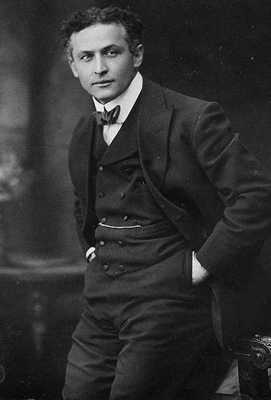 Houdini was born Erik Weisz in 1874 in Budapest, Hungary, to Jewish parents. One of six children, the Weisz family moved to America in 1878. He changed his name to Ehrich and his friends called him Ehrie, which inspired his Americanized first name ‘Harry.’ He later changed his surname to Houdini because his partner, Jake Hyman, said it would mean ‘like Houdin’ in honour of the magician Robert-Houdin. His other stage names include, ‘Eric the Great,’ ‘The King of Cards,’ and ‘Eric, Prince of the Air.’ 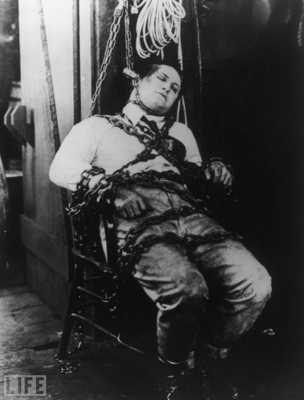 Fascinated with magic from an early age, his first performance was at age 9; he picked up pins with his eyelashes whilst hanging upside down (he was paid thirty-five cents). He was also a trapeze artist and later devised an act called The Wild Man, locked in a cage wearing a loincloth and eating raw meat. Before gaining fame, he worked for free as a locksmith in order to gain a thorough knowledge of lock mechanisms. When he gained fame as an escapologist, one of his early stunts was to escape from the belly of a whale. 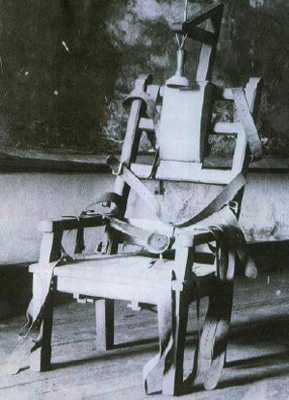 Houdini was interested in anything to do with death; he bought the first electric chair, Edgar Allan Poe’s desk, and performed many of his stunts on Death Row. He also developed an interest in murderers, especially John Wilkes Booth. After the death of his beloved mother, Houdini gained an interest in spiritualism but later took it upon himself to expose all mediums as conmen (he attended séances in disguise, wearing a false beard and hat and revealed himself at key moments). Friend and creator of Sherlock Holmes, Sir Arthur Conan Doyle, was convinced Houdini could communicate with the dead without knowing it. 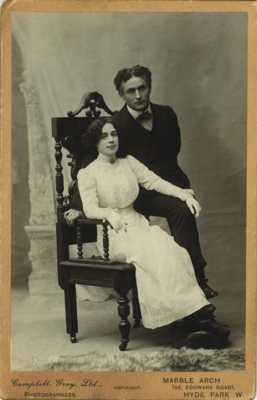 Always referring to each other as ‘Mr. Houdini’ and ‘Mrs. Houdini,’ Houdini married Wilhelmina Beatrice ‘Bess’ Rahner only two weeks after meeting her. He wrote her hundreds of love letters during their thirty-year marriage, often when they were in the same room. She was always his onstage assistant. Whenever they argued, Houdini would leave the house and take a short walk. On his return, he would throw his hat into the room; if she threw it back out, she was still angry. She was distraught at his death and attended many séances, despite him exposing many mediums as frauds. 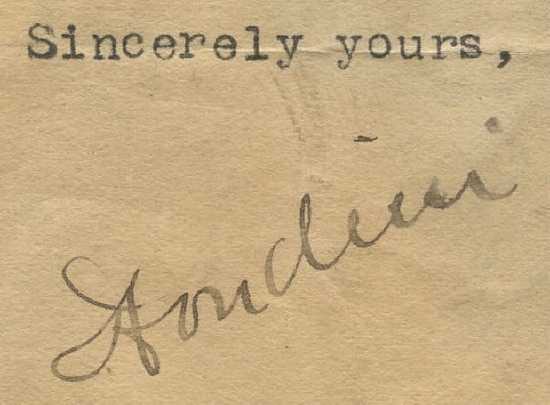 Houdini and Bess never had children and many speculated on the reason why. One speculation was that Houdini was x-rayed many times by his brother Leopold (New York’s first x-ray specialist) and the radiation made him sterile. To make up for this, he simply invented an imaginary child. He was called Mayer Samuel Houdini who was named after Houdini’s own father. Over the following years, Houdini wrote many letters to Bess on Mayer’s progress but they stopped after their ‘son’ became President of the United States. 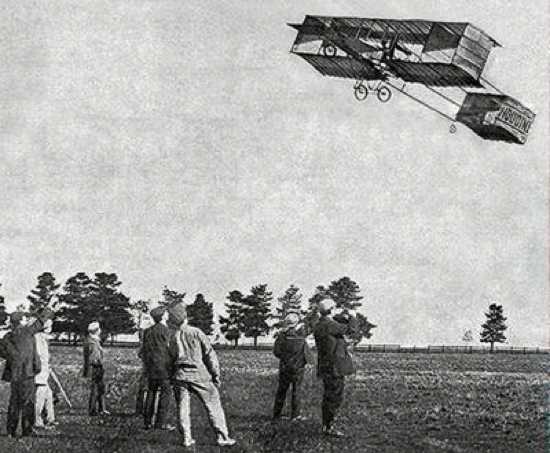 In 1909, six years after the Wright brothers proved human aviation possible, Houdini became extremely interested in airplanes. He once told a friend that the only reason he learned to drive was to get to the airport quicker. He learned to fly in Germany, the condition being that he taught German pilots once he was qualified. He regretted it afterwards, furious that he had taught the enemy pilots in War World I. He was the third person to fly across Australia (he claimed to be the first) and never flew again after that. 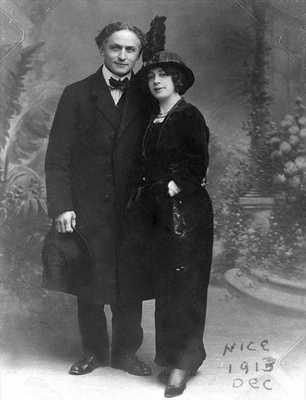 Houdini was a very patriotic American; so much so that he lied about his birth and claimed he was born in Appleton, Wisconsin. In 1917, he volunteered to fight in the First World War but was rejected due to his age. Instead, he went on tour in Europe and performed for the troops for free. One trick he performed was ‘Money for Nothing’ in which he produced a seemingly infinite amount of coins out of thin air for US soldiers (he gave away over $7000 dollars of his own money). 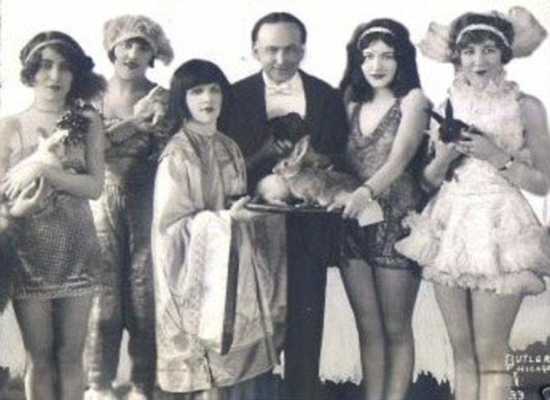 Houdini’s assistants were not to be envied as they were often on the receiving end of his volatile temper and suspicion. One of their main jobs was to chloroform any overly eager punters who showed up backstage and leave them lying unconscious elsewhere. Despite writing numerous books and magazines on magic tricks, Houdini was highly secretive about his own. Because of this, he demanded an intense loyalty from all his assistants. His need for this allegiance was so great that he made them sign an oath, allegedly the only performer to have gone to such lengths. 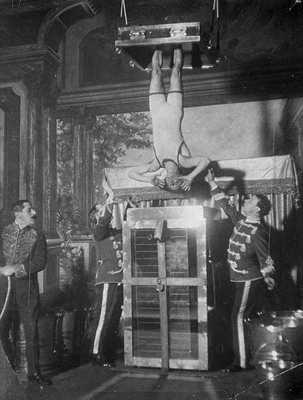 In order to achieve his death-defying stunts Houdini had to train himself to be both physically and mentally fit. He had an over-sized bath tub fitted into his house so that he could practice holding his breath (he could hold his breath for three minutes). He trained himself to be ambidextrous, making his left hand as able as his right. Determined to reach the peak of his profession, Houdini would practice card tricks over and over again without looking. As he sat down to talk with friends he would repeatedly untie knots with his feet. 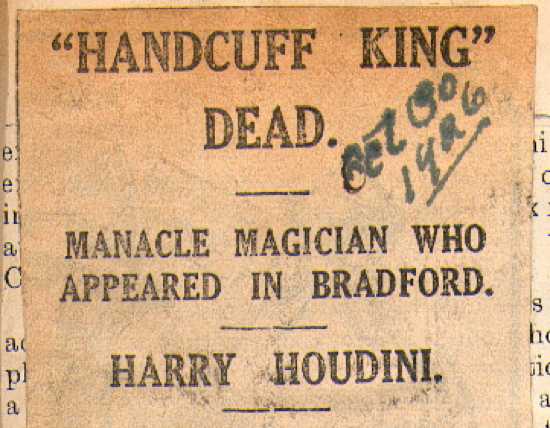 He died from peritonitis on Halloween in 1926 after suffering from acute appendicitis. Over two thousand people attended his funeral and a fellow magician ceremoniously broke a wand, starting a tradition that still exists today. He was buried beside his parents with his mother’s letters under his pillow. He bequeathed all his props to his brother Theo but requested their destruction after Theo’s death. He was also an avid book collector and willed over 5,000 books to the Library of Congress (in life Houdini hired a librarian to maintain his books and he took hundreds of books on tour).