In his lifetime, innovative science-fiction author Philip K. Dick created a majestic body of work, one that expanded at about the rate of the universe. So much so that his lasting legacy continues to be a treasure trove from which films are continually adapted. His themes were timeless, as was his writing style, which is why his stories could serve as the groundwork for exciting blockbusters in any decade – and have steadily – from 1982 on (and there are many, many slated to come still). Here are ten of his brightest brainchildren to be projected onscreen:

This film took far too many creative liberties to even still be considered a respectable or faithful adaptation. The only elements left intact are generic ones: the protagonist Cris’ ability to see into the future. The rest of the story is typical Hollywood drivel and an expansion upon the film’s main hook which shows the ironic unpredictability of a predictable future. The novelette on which it is based, “The Golden Man,” would have Cage’s character as a feral mutant-type creature with glowing golden skin and an ability to see into the future, and see the multitudinous outcomes of every decision. In spite of his grotesqueness, he has a superpower in his uncanny ability to charm women – of course Cage kept that trait intact – and he even manages to impregnate the fiancee of the government agent sent to track him down and capture/eradicate him. The ultimate realization, after Cris escapes, is that perhaps living like an animal is indeed superior to living like a civilized person within society. The Dickism to walk away with is that the fittest may survive, but humans may not be the fittest beings in the chain of evolution. No doubt if this story were adapted on screen back in the eighties, it’d be much more faithful.

This film is based on a short story written in 1952 (and published in 1953 in the sci-fi magazine Imagination), and reveals how timeless Dick’s sci-fi craft is, even in his early years. The plot centers around an employee of a company called Rethrick Construction. He has an odd sort of contract with the company who compensates him heftily, on the condition that his memory be erased subsequently. One payday, instead of the usual check, he receives and envelop full of mysterious contents, which just so end up helping him in a number of binds he foresaw while working on a device that can see into the future (a common Dick trope). While the various trinkets (incl. some wire, a bus token, a strip of cloth, a broken poker chip, a card key, and a parcel receipt) helped him escape from government pursuers, the remaining items help him blackmail his own employer into making him a company partner, the company leading the way in forming a resistance against the malevolent government (another famous Dickism).

This movie is based on the book of the same name, which airs a lot of Dick’s late political and personal sentiments. As a sort of historical fiction, society is a dystopian, totalitarian-ruled one, not unlike 1984, where after the Lyndon Johnson Administration, a Joe McCarthy-Richard Nixon hybrid in Ferris F. Fremont is in power, and is wickedly corrupt. His aim is to instil a sort of paranoia in the American public that will keep him in power, only his attempts form the groundwork for a resistance. Dick himself is written into the book, and is one of the resisters; he is ultimately captured with a few of his cohorts for penning a disseminating a seditious song. His friends are put to death, and he realizes the importance of the youth and subsequent generations, who sing his song. The movie stars Alanis Morissette (what decade is it?) and was released in 2010 (it’s currently awaiting distribution). 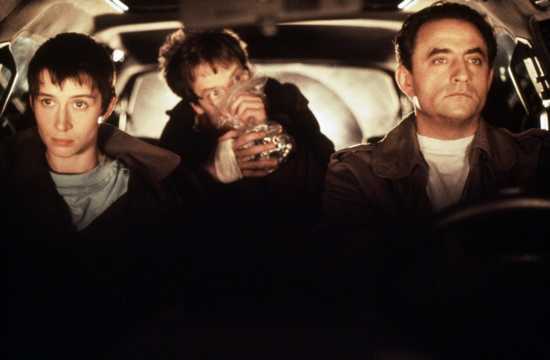 This French film is based on Dick’s only non-science fiction novel Confessions of a Crap Artist. The story centers around so-called “crap artist” Jack Isidore who is slightly misguided and obsesses over things like science magazines, absurd, dis-proven theories and the end of the world. He is estranged from a normal society (the book takes place in 1950s California) and even falls in with a religious cult-of-sorts, although his “functional” sister and her husband sort of define dysfunction (she is a micro-manager and he kills her animals and ultimately himself when he finds out she cheated on him). The film is largely faithful, different only in the location (changed to modern-day France) and Jack’s name (Barjo, which translates to “nutjob,” although we see that he is not the craziest one in the bunch after all).

The headlining concept in the film and the 1954 short story is the idea that there is some kind of clandestine organization of puppet masters pulling the strings of our daily lives, freewill only existing in so much as you choose to walk on the pre-arranged floor tiles. This is played up to literal ends as this so-called group of Adjusters are required to correct any incongruous details and deviations from strict protocol. When the protagonist is learned to have discovered the men standing behind the curtains, and the various proverbial boom mics peeking into the shot, they threaten his peaceful way of life if he lets the cat out of the bag. In the case of Matt Damon’s politician character, that could be an especially costly mistake.

The difference between the film and the 1953 short story (“Second Variety”) on which it is based, is how steeped in Cold War motifs the latter is (natural given the time in which it was written). The 1995 movie plays more as a Total Recall follow-up, but it keeps intact the essential themes. The film centers on a rivalry between a mining company (New Economic Bloc) and its employees (various scientists and personnel who form a resistance called the Alliance). The scientist of the latter create an artificially-intelligent weapon that produces ultra-violent robots that can’t distinguish enemies from friendlies, so they often kill humans on both sides, as well as other robots. Ultimately these robots (called screamers in the film for the noise their predecessor technology emits) evolve and become human-like, and pose as wounded allies and lost children with teddy bears, cleverly preying on that weak spot we know as human sympathy. Trust, and the breach of which, are huge cornerstones to this film, as well as the original McCarthyistic text.

The 1977 book on which this dystopian film is based is largely based on scenes from Dick’s own life, in which he’d fill his house with street junkies in the wake of divorce. In that time, he’d seen the effects of drug abuse, and experienced addiction firsthand as he took a fancy to amphetamines (which had a huge part in his prolific literary output). The original story is about a secret agent who poses as a drug addict who imbeds himself within a group of users/abusers of “Substance D,” a banned sort of powerful hallucinogenic. Ultimately, he actually becomes addicted, and has to go to rehab, suffering from terrible withdrawal symptoms. He learns that he was in fact surrounded by secret agents himself, and so he is too when he “goes undercover” once again at a rehab clinic/commune, where he suffers from neurological deficits as part of his withdrawal symptoms. He also happens upon, while farming one day, the flower from which Substance D is derived, and decides to share it with the undercover agents posing as recovering addicts. The brilliance in it all is that while this all could be a story about the dangers of going too deep undercover (not unlike Johnny Depp’s character in Donnie Brasco), it could also be about one delusional junkie whose hallucinations manifest themselves as a very real-feeling perception of reality.

The Spielberg film is a pretty close (and glossy) depiction of Dick’s original vision, only straying to make the main character sexier than originally conceived. The main concepts at play are free will and pre-determined destiny, and how knowledge of the latter can inhibit the former, especially when a “Pre-Crime” force has been created to detain anyone who would – if prophecy was accurate (or a “majority report,” produced a consensual prediction) – commit the crimes if left undeterred. As John Anderton (Cruise’s character) discovers that he himself is pre-destined to kill a man, he seeks a sort of pre-redemption and a “minority report” that will prove his pre-innocence. Along the way, he unravels and discovers inherent flaws in the pre-crime system itself. In the 1956 short story, the “Pre-cogs” used to foretell the crimes being committed are depicted as these deformed mutants – the genetically-altered-and-superior children of drug addicts – who are largely regressed as human beings, devoting all of their brain activity to their predictions.

The film’s biggest calling card is Arnold Schwarzenegger in the protagonist’s chair (literally) …and that Martian chick with the three breasts (and, of course, all the exploding heads). The source material, however, probes a bit more than a few nostrils, and uses more brain power than Schwarzenegger is usually equipped to distribute (“It’s not a tumor!”), but the movie (from 1990) does stay largely on point. The original story, called We Can Remember It for You Wholesale, deals largely with the concepts of ‘what is reality?’ and ‘whose reality is it?’ In a futuristic society (of course), Douglas Quail wants to visit Mars (which is like going to Hawaii at this point in time), but can’t afford it, as he’s the future equivalent of a blue collar worker. He encounters a company called Rekall Incorporated which implants “extra-factual” memories, only those memories happen to coincide with what is actually true, or so the narrative perceives: that Quail is actually an undercover agent. What’s unlocked is pandora’s box, along with feelings of paranoia and chase scenes from those who think you “know too much.” A remake of the film is set to be released on August 3rd of this year, and it boasts an unfaithfulness to both the original film (no Mars) and P.K.D. story, more so summing itself up via the poster tagline “What is real?”

This movie has a massive cult following, probably because of how faithful it is; not just in aesthetic or spirit, but thematically (Dick, after seeing some of the cityscape cinematography, even said it was “exactly” as he had imagined it, even though director Ridley Scott had not actually read his 1968 book). The book on which the film is based is called Do Androids Dream of Electric Sheep?, and beyond plot details – like living in a post-nuclear society in a quasi-distant future, or the central character Rick Deckard being a part-time bounty hunter assigned to terminate a couple of rogue androids – the core issues at the heart of the action are left unstripped. What is constantly at play, much beneath a surface of flying cars and holograms, is a deep moral conflict, and the implications of killing something that is so human-like (that some humans even treat as friends and romantic counterparts) and with such apathy. Dick did die a few months before this film was released, but it’s reassuring to know that he was a cheerleader the whole way through.