Serial killers have fascinated and disgusted us for generations, their behavior an insane cesspit of deviant acts that we can’t get enough of – whether it be films like Silence of the Lambs or in the news as they dominate the headlines, making us double-check our windows and doors. Here lies a compilation of the most bizarre statements to have passed through the lips of these monstrous beings.

Quote – “May your wife and children get raped, right in the ass.” (To the jurors who convicted her.)

Aileen Wuornos entered the world on February 29th 1956 only to be forced into the most turbulent childhood, being forced into acts of incest from an early age. Barely leaving infancy she could be found trading sexual favors for cigarettes and when she was 14 faced the horrendous predicament of being pregnant – with the potential fathers being her brother and her grandfather. Shunned by her family she left home to reside in the nearby woods. She later went on to hitchhike across America working as a prostitute. She was sentenced to death after being convicted of killing seven men. She claimed self defense, stating these men had raped her.

Born May 19th 1870 Albert fish was a cannibal and child rapist who boasted to have consumed children in every state. He was also known as The Brooklyn Vampire, the Werewolf of Wysteria and the Moon Maniac. His family had an intense history of mental illness and religious mania and Fish was no exception to the family tradition. From an early age, his pastimes included the consumption of urine and feces, frequenting public baths to watch young boys undress, and writing obscene letters to women he found in the classified ads. While in prison he enjoyed forcing needles into his groin and urinary tract. He was sentenced to death for the kidnap and murder of Grace Budd, deeming the electric chair the greatest sexual thrill imaginable. During his execution the electric chair short circuited due the amount of needles in his body. 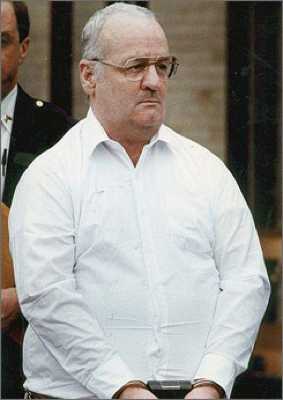 Born June 6th 1945 Arthur Shawcross was imprisoned for the manslaughter of two children only to kill eleven more times after his release. Recorded as having an extremely low IQ, somewhere around 86 and 92, he served in the war in Vietnam where he witnessed various atrocities. He was also known as the Genesee Killer where he murdered eleven prostitutes, although the number could be significantly higher. He died at the age of 63 in 2008. There is a youtube clip on Shawcross you can watch here.

Quote – “I actually think I may be possessed with demons, I was dropped on my head as a kid.”

Born March 9th 1945 Dennis Lynn Rader killed 10 people is Sedgwick County between 1974 and 1991. The initials BTK became his moniker as he declared in various letters to the local newspapers that they stood for Bind, Torture, Kill. After serving in the Air Force, Rader became a dogcatcher and supervisor for the Compliance Department. He remained at large for so long as his MO differed from victim to victim preventing any links or patterns. He was eventually caught after a familial link was established between semen found at one of the crime scenes and a tissue sample taken from his daughter.

Quote – “I sat down to think things over a bit. While I was sitting there, a little kid about eleven or twelve years-old came bumming around. He was looking for something. He found it too. I took him out to a gravel pit about one quarter miles away. I left him there, but first committed sodomy on him and then killed him. His brains were coming out of his ears when I left him, and he will never be any deader.”

Born June 28th 1891 Panzram was a convicted serial killer, arsonist, thief, burglar and rapist. Panzram confessed to his best friend and prison guard Henry Lesser to 22 murders and of sodomizing over 1000 young males. Of Prussian heritage, young Panzram was raised on a farm in Minnesota then was incarcerated several times for petty crimes. His killing spree began in 1920 when he started to lure young sailors from bars to rape and shoot them.

Quote – “The demons wanted my penis.”

Also known as the Son of Sam and the .44 Killer, Berkowitz terrorized New York in the summer of 1976 by shooting 8 people, claiming he was ordered to kill by a demon that possessed his neighbor’s dog. He later went on to claim he only took part in two of the shootings as the others took place at the hands of various members of a Satanic cult he belonged to. However, no other people were convicted of these crimes.

Quote – “Even when she was dead, she was still bitching at me. I couldn’t get her to shut up!”

Also known as the Co-Ed Killer, Kemper weighing in at 300 lbs and standing 6 ft 9 inches tall, was a convicted serial killer and necrophiliac. His career in killing started at 15 when he killed his grandparents. He was institutionalized in a psychiatric Hospital where he displayed severe sociopathic tendencies. Upon his release he killed and dismembered six female hitchhikers then his mother and her friend before turning himself in two days later.

Quote – “If the blue meanies are going to get me they’d better get off their asses and do something.”

The Zodiac Killer operated in California during the late-’60s and ’70s, shooting young couples, the Zodiac Killer became one of the most renowned serial killers of all time due to his taunting, encrypted letters to the press and the fact that he has never been caught. He has been confirmed with seven shootings and five deaths although he boasts 37 killings in his letters. The killer was named the Zodiac by the press as his letters were signed with the hunting symbol of the crosshairs. Numerous attempts by police and amateur investigators have taken place to discover the identity of the killer but the case has remained open since 1969.

2
Ted Bundy
Who Was Ted Bundy?

Serial killer, rapist, kidnapper and necrophiliac, Theodore Robert Bundy confessed to 30 homicides across seven states during the early-’70s. Due to his handsome looks and charismatic behavior, the clinical psychopath found it easy to lure young women to his car. He often would have a fake plaster cast around his arm and would ask for the assistance of a young girl in helping him carry something to his car. Once there he would trap them inside his VW Beetle which he’s modified by taking out the inside handles rendering the girls’ escape futile. Blondie singer Debbie Harry had a fortunate escape from the killer unlike many of his victims who all resembled his former girlfriend, attractive, petite with mid-length brown hair in a center parting.

Quote – “The only thing they can get me for is running a funeral parlor without a license.”

Executed in 1994, Gacy was convicted of 33 murders and sentenced to death for 12. Gacy lured teenage boys to his home before brutally murdering and raping them. He buried 26 of his victims in the crawl space of his basement, another three he disposed of in a nearby river and the rest were buried in various parts of his property. Also known as the Killer Clown, the name came about because of his charitable fund-raising events where he performed as Pogo the Clown.