The concepts of witches, warlocks, and wizards often conjure up images of the Salem witch hunts and the European inquisitions and witch burnings.  As with many things in history there are a lot of misconceptions surrounding these ideas.  Here we are looking at one particular myth.

The myth: Most people tried for witchcraft were burnt to death at the stake.

Wizards thou shalt not suffer to live 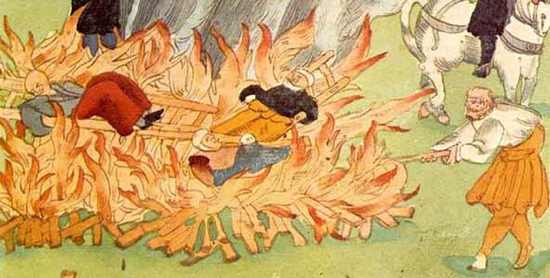 If a man seduce a virgin not yet espoused, and lie with her: he shall endow her, and have her to wife. If the maid’s father will not give her to him, he shall give money according to the dowry, which virgins are wont to receive. Wizards thou shalt not suffer to live. Whosoever copulateth with a beast shall be put to death. He that sacrificeth to gods, shall be put to death, save only to the Lord. — Exodus 22:16-20

We all think of the middle ages as a time of darkness lit only by the dim light of glowing embers – the consequence of yet another witch burning. But the reality really is far from that. While there are thousands of myths surrounding the so-called “dark ages” we will focus here on the witch hunts.

First of all, contrary to the alleged hundreds-of-thousands of witches killed, during the highest point (which spanned three centuries) of witch hunts, only 40,000 were executed around the world. Of those, a mere handful were put to death by burning. In fact, in Britain from 1440-1650, only three women were burnt at the stake and only two of them were burnt alive.

The most common form of execution for the crime of witchcraft, in Europe and the United States, was hanging – the same punishment that remains to this day the most widespread method of execution. Another interesting misconception is that only women were killed. In fact, at least one quarter of accused and executed witches were men – warlocks in other words.

What is most surprising is that it was actually very difficult to have a person found guilty of witchcraft. The alleged-victim had to prove that he had been bewitched and juries were very reluctant to convict. Over 75% of witch trials resulted in acquittal. The whole concept of witch hunts and the use of the death penalty for the crime was largely abhorred by the general populace (judges included) and it was the zealousness of a few that enabled it to remain unabated for so long.

Interesting Fact: The Witchcraft Act of the United Kingdom was not repealed until 1951. The last witch to be jailed in England for the crime of witchcraft was Jane Rebecca Yorke in 1944. The Witchcraft act remains in force in Israel which has a legal system based on the UK system