La Operacion is a documentary that highlights the female sterilization policy. This policy was implanted by the United States as part of FDR’s “Operation Bootstrap” in a move toward industrialization. By 1974 35% of the Puerto Rican women were sterile and this number reached 39% by 1981. The problem with this sterilization policy is that most of the Puerto Rican women were misinformed about the sterilization process and most of the women didn’t know what the consequences would be. 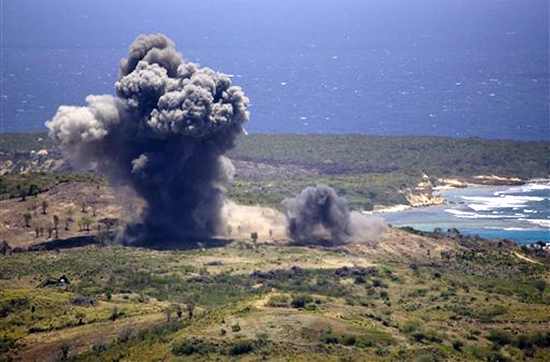 In 1948 they commenced bombing exercise which continued for 55 years. Over the course of their stay, more than 22 million pounds of military and industrial waste was deposited on the island. The island was bombarded an average 180 days per year and in 1998 the Navy dropped 23,000 bombs on the island. Professor Jose Seguinot Barbosa, Director of the Geography Department in the University of Puerto Rico at Rio Piedras, states in his study “Vieques, the Ecology of an island under siege” that the eastern tip of the island constitutes an area with more craters per kilometer than the moon.

As a result of all this, the cancer rate in Vieques is 27% higher than in the mainland. Most of the elements and toxic compounds dumped in the island were arsenic, lead, mercury, cadmium, depleted uranium and napalm. Studies show that the ground water in Vieques is contaminated by nitrates and explosives. Testing done in the Lcacos Bay showed concentrations of cadmium in crabs 1,000 times greater than the World Health Organizations tolerable ingestion maximum dosage. Heavy metals have been found in other species of fish. 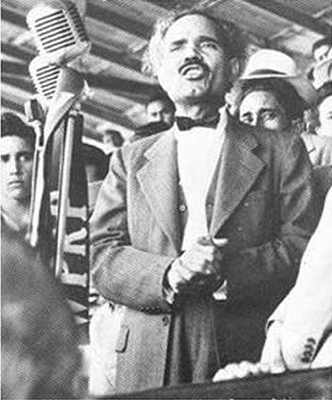 Dr. Pedro Albizu Campos was a prominent leader in the independence movement of Puerto Rico. Albizu was imprisoned numerous times for seditious conspiracy against the United States. While in prison, Albizu said he was a subject of human experimentation without consent or warning. The U.S. Government’s response was that Albizu was insane. The president of the Cuban Cancer Association, Dr. Orlando Damuy, traveled to Puerto Rico to examine Albizu. Dr.Damuy reported burns on Albizu’s body caused by intense radiation. It is said that they placed a metal clip and film on Albizu’s skin and the clip radiated into the film.

Albizu died in 1965 and more than 75,000 Puerto Ricans carried his remains to the Old San Juan Cemetery. In 1994, under the administration of ex-president Bill Clinton, the United States Department of Energy disclosed that human radiation experiments had been conducted without consent on prisoners in Puerto Rico during the 1950s and 1970s. 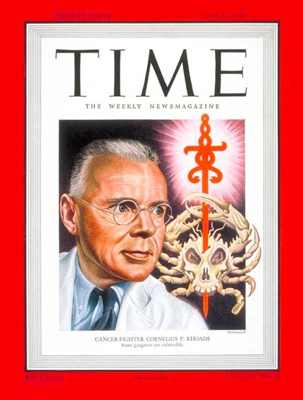 Dr. Cornelius Rhoads was an American doctor and pathologist that became infamous for performing several objectionable experiments with human beings. In 1931, sponsored by the Rockefeller Institute, Rhoads deliberately infected several Puerto Rican citizens with cancer cells. Supposedly, thirteen of the patients died. Dr. Rhoads once said in a written document: “The Porto Ricans [sic] are the dirtiest, laziest, most degenerate and thievish race of men ever to inhabit this sphere… I have done my best to further the process of extermination by killing off eight and transplanting cancer into several more… All physicians take delight in the abuse and torture of the unfortunate subjects.” An investigation done in 2003 by bioethicist Dr. Jay Katz found that the accusations were well founded and documented. 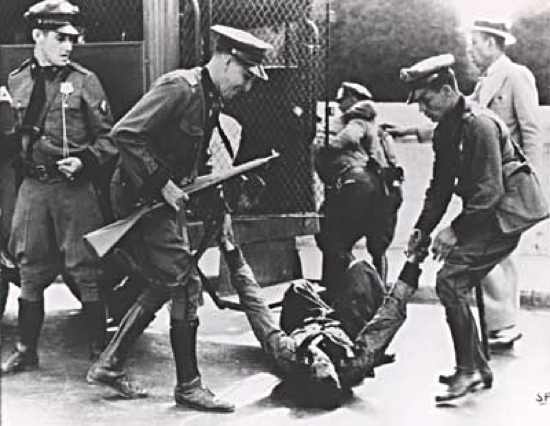 The Ponce Massacre, which took place on March 21, 1937, was one of the most violent episodes in the history of the twentieth century in Puerto Rico. The activity was announced in El Mundo newspaper on March 19, indicating that the meeting of the Nationalists in Ponce and adjacent areas would be at 2pm in front of the Nationalist Party Headquarters in Ponce. That morning, Colonel Orbeta, the chief of police, traveled to Ponce with the intention of prohibiting the Nationalist activity. A week before, the Nationalists had requested authorization for the march from Mayor José Tormos Diego, who was away from Puerto Rico on vacation and had left Dr. William Gelpí as acting mayor. Gelpí authorized Casimiro Berenguer, the military instructor of the “Cadetes de la Republica” to disseminate information to the effect that permission had to be granted by Mayor Tormos Diego. The Nationalists had filed the request despite the fact that the laws of Puerto Rico allowed parades or public acts to be held without the need to ask permission.

The police under the command of Guillermo Soldevila, the head of the force in Juana Díaz, and Felipe Blanco cordoned off the demonstrators, using expert marksmen mobilized from all the police stations in Puerto Rico. The police covered the corner where the Nationalist Council was located on Marina Street, between Aurora and Jobos Streets. Meanwhile, the Cadets of the Republic and the Nurses Corps organized in three columns. The cadets wore a uniform of white trousers, black shirts, black caps, and on the left sleeve, a Calatravian cross. Leading the column was cadet captain Tomás López de Victoria. The young women formed up as the nurses corps, wearing white uniforms and marching behind the young men. Bringing up the rear was the band, made up of five or six musicians. Nearby, on Aurora and Marina Streets, almost in front of where the Council was located, the families of the cadets came together with other Nationalists who had come to see the parade. The band played “La Borinqueña,” and the captain of the Cadet Corps, Tomás López de Victoria, immediately gave the order to step off. At the precise moment when they were about to do so, Soldevila raised a whip, put it to the chest of López de Victoria, and told him that they could not march. Police officer Armando Martínez ran from the corner in front of the Nationalist Council toward Marina Street, firing once into the air, which unleashed volleys of shots from arms of different calibers. Eight people died instantly and others died later, for a total of nineteen. Police officers Ceferino Loyola and Eusebio Sánchez died victims of the crossfire of their fellows. Georgina Maldonado, a 13 year old-girl, an employee of a nearby gas station, José Antonio Delgado, a member of the National Guard who was passing by, and fourteen Nationalists also died.

A number of citizens of Ponce requested that the American Civil Liberties Union investigate what happened on March 21. An Investigating Commission on the causes of the Ponce Massacre was established, presided over by Atty. Arthur Garfield Hays, a US citizen delegated by the ACLU, with Emilio S. Belaval, the president of the Puerto Rico Atheneum, Mariano Acosta Velarde, the president of the Puerto Rico Bar Association, Francisco M. Zeno, the editor of La Correspondencia newspaper, Antonio Ayuso Valdivieso, the director of El Imparcial newspaper, and Manuel Díaz García, a former president of the Medical Association. The commission carried out an exhaustive investigation of the facts and in its report placed the blame on Governor Winship. It referred to the happenings as the Ponce Massacre. [source] 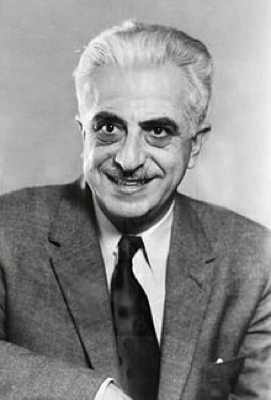 In the early 1950s the Puerto Rican women were used for experimentation in the making of the first birth control pill. The Pill was invented by Dr. Gregory Goodwin Pincus but strict laws in the U.S. didn’t permit full scale experimentation. In 1955 Dr. Pincus and his colleague, Harvard obstetrician and gynecologist Dr. John Rock visited Puerto Rico and then decided it was a perfect place to test out their pill due to the lack of anti-birth control laws.

The trials began in Rio Piedras but quickly moved throughout the poor sectors in the island. The experiments was based on poor and working class women; these women were not told the pill was experimental and were not told the negative effects the pill could have on them. Three young women died during these experiments and no investigations were conducted to determine cause of death. 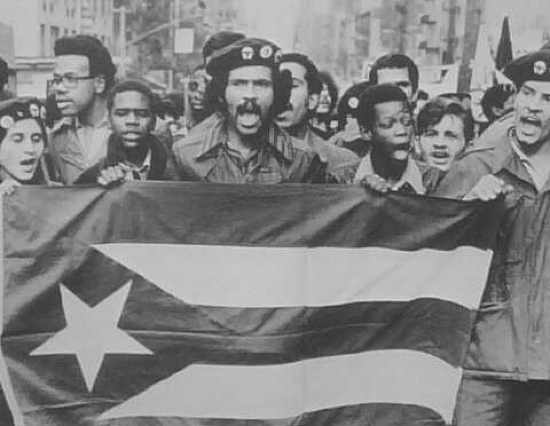 The United States implanted an economy that depended on them; this destroyed the agriculture in Puerto Rico. In less than 20 years, 90 cents of each dollar that a Puerto Rican spent went to the United States. This made Puerto Rico one of the poorest countries in America. The Puerto Ricans still do not have a defined status; Puerto Rico has one of the worst economies in America and an unemployment rate of more than 16%. Puerto Ricans don’t have the same rights for their social security or even veterans’ benefits, even though they meet the same requirements than the people that live in the states. 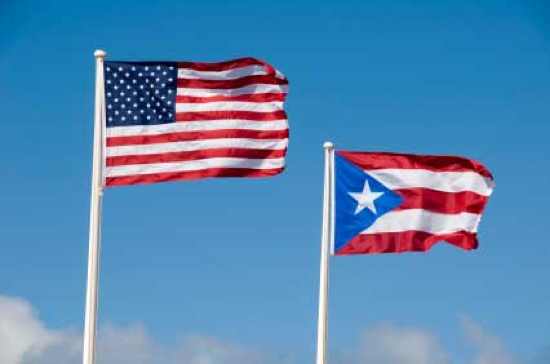 You could think that Puerto Rico has the Cabotage laws applied because it hasn’t defined their political status but this in not true because other US territories like the US Virgin Islands don’t have to comply with these laws. Another fact is that the Puerto Rican trade produces 25% of The U.S. Merchant Marine’s income.