The witch hunting craze that swept through northern Europe in the 16th and 17th centuries was the result of a mixture of genuine superstition and religious fervor combined with political motivations and paranoia. Peasants and nobles alike looked to supernatural causes for storms and diseases, but they also saw the trials as ways to gain office or wealth by eliminating their rivals. The condemned witches and sorcerers were accused of horrifying crimes like intercourse with the devil and killing infants. During the trials their confessions were often extracted by violent means. The neurotic atmosphere of Europe throughout this time period led to more executions than acquittals. 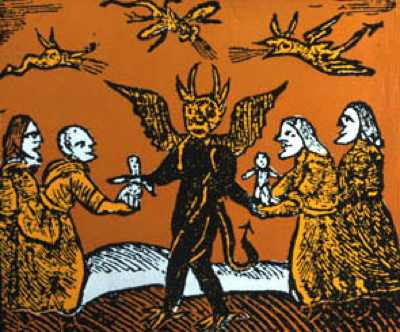 On Halloween night of 1590, Agnes Sampson, a midwife to the rural residents of East Lothian in Scotland, was said to have attended a witch’s coven hosted by Satan at the gloomy Auld Kirk Green, a small church in North Berwick, Scotland. The insidious intention behind their gathering was to summon a supernatural storm that would sink the caravel of King James VI’s young Danish bride, the newly anointed Queen Anne, on her way to Scotland from Copenhagen. Storms did indeed inflict Anne’s voyage, forcing Anne and her escort to take port in Norway.

Upon hearing this news, the King himself went to retriever her and when they tried once more to cross the North Sea another monstrous storm beset them, but this time they still successfully landed in Scotland. Shortly after his return, the King himself questioned Agnes and others at Holyrood Palace in Edinburgh. This would be the start of the North Berwick Witch Trials which would lead to 70 executions. To extract her confession torturers fitted Agnes with an iron muzzle known as the witch’s bridle, a Scottish invention. After her confession, Agnes was taken to the nearby Castlehill and was garroted before being burned at the stake. Her ghost has supposedly been spotted floating down the austere halls of Holyrood Palace. 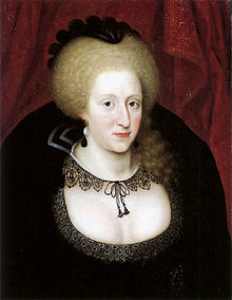 Anna Koldings, who was known by her contemporaries as “The Devil’s Mother,” was a Danish witch who was also accused of summoning storms against Queen Anne’s (pictured above) ship. She met others in the house of Karen the Weaver where they performed spells against the Queen. Witch hunts in Denmark had become popular after the country converted to Protestantism in the early 16th century and while genuine religious zeal fueled this fervor, high-ranking officials also used them for political advantage.

The Danish minister of finance, who was being investigated for undersupplying the royal ships for James VI’s journey with Queen Anne across the North Sea, voiced his suspicions of Karen to shift the blame from himself. His accusations led to her arrest. During the investigation, Karen pointed out several others including Anna Koldings. Imprisoned and tortured, Anna eventually confessed and contributed the names of five others, one of which was the wife of the mayor. With twelve other women, Anna was burned at the stake in Kronborg, the elegant green-roofed castle which provided the setting for Shakespeare’s Hamlet. 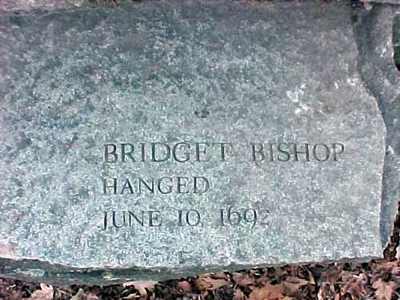 Bridget Bishop was the first women executed as a result of the Salem Witch Trials in 1692. Bishop was a successful and outspoken woman. She owned several taverns and was known to dress in provocative red gowns. The townspeople of Salem claimed a wide variety of accusations against her which would lead to her death. Allegedly she had bewitched five girls, poisoned a pig, and attacked men while they slept. (The last accusation was probably due to a natural condition, sleep paralysis).

Dolls were also instrumental in her denunciation. A local named Samuel Shattuck testified that she had asked him to dye lace for her which he believed she intended to use for a poppet. The poppet predated the Voodoo doll and serves a similar purpose of transferring whatever spell is inflicted on the poppet to the person it represents. Salem townsfolk John and William Bly later found poppets in Bishop’s house. Her resentful attitude throughout her trial eventually led to her prosecution, which would be followed by 71 more. 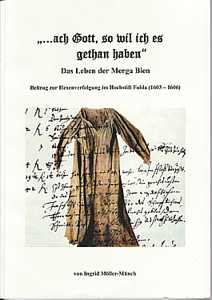 Merga Bien, a rich German heiress, confessed to murdering her 2nd husband and his children by means of witchcraft and to attending a Witches’ Sabbath. Witch hunter Balthasar von Dernbach , the prince and abbot of the spire-topped town of Fulda, had embarked on a series of witch trials upon his return from exile in 1602.

Merga Bien was one of the first women he arrested and imprisoned. Although she was pregnant, Merga was not exempted from execution as the laws dictated because she was forced to confess that her unborn child had been fathered by the Devil. In Autumn she was executed by fire at the stake. The Fulda witch trials would go on to claim 250 lives, ending only after Dernbach’s death in 1605. 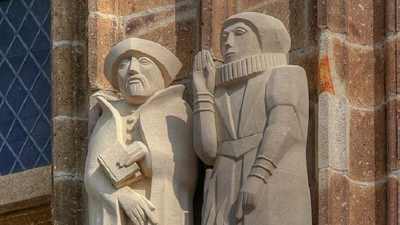 Germany’s first female postmaster, was tried for witchcraft in Cologne in 1627. In the middle of one of Cologne’s cold winters, a nun at the local convent accused Katharina of causing illness and death among the nuns and the archbishop arrested Henot based on the nun’s suspicions. During her imprisonment Henot was tortured but never confessed to anything.

Despite her brother’s attempts to prove her innocence, she was sentenced to be burned alive in May. Her exoneration was not attained until just this year. As of June 28th, 2012, the City Council of Cologne has cleared Henot’s name as well as the other victims of the Cologne witch trials because they believed the executions were the result of political conspiracies. 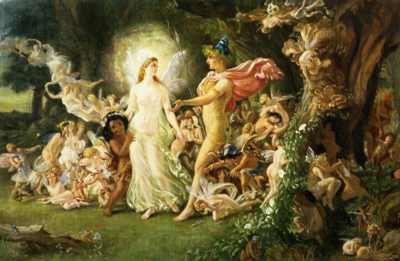 In a town located within a forested and boggy area of Sweden, Karin Svensdotter, a maid, claimed that her seven children were fathered by the King of the Faeries. This resulted in her being put on trial in 1656 for her own unbidden confession. In 17th century Sweden, consorting with fairies was a genuine crime which was usually punished the same way as sodomy or bestiality.

Prior cases involving men’s trysts with nymphs had sometimes ended in execution. However Svensdotter’s case became an early instance of compassion for the insane. Her judge had been advised by church officials that Satan had driven her mad. Instead of punishment, the judge ordered the church to pray for her. Later she affirmed that she no longer saw the fairy. 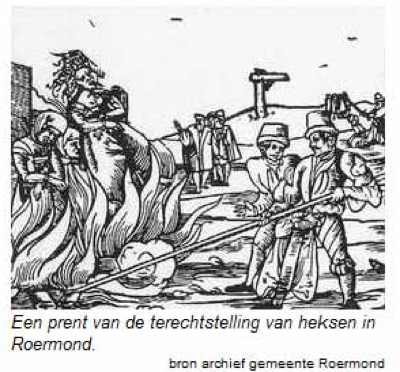 The accused often came to Roermond with hopes of acquittal, but zealous mercenaries were prone to lynch or drown the freed women anyways. In early trials such as Merrie’s, the Dutch court maintained skepticism towards peasant accusations and would not use torture to extract confessions. Merrie was only banished because she pleaded innocent, but upon leaving Roermond marauding Spanish mercenaries found her and drowned her in the Maas River. 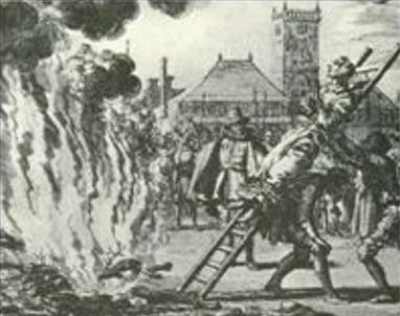 Entjen Gellis, a Dutch midwife, confessed to killing fetuses and newborn babies during the Roermond witch trials of 1613, the deadliest year of all for witches in the Netherlands. Local magistrates raided the rural town of Straelen where they arrested Gillis and thirteen other witches. Their magic was said to have caused diseases and miscarriages and they became part of a larger trial, sparked by the sudden deaths of hundreds of newborns, elders, and animals.

As an emergency measure, the magistrates rounded up 63 witches and sentenced them all to death within a short period of time. As in earlier confessions, they claimed the devil had made them do it, but unlike Karin Svensdotter there would be no mercy for the witches of Roermond. 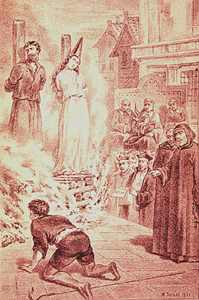 Märet Jonsdotter was accused of attending Witches’ Sabbaths in Blockula, a mythical Swedish meadow. Jonsdotter was the first witch tried in Sweden during “The Great Noise” that swept through the country between 1668 and 1676. A local shepherd girl, Gertrud Svendsdotter, whose father had unsuccessfully courted Märet, was the first to accuse her. Getrud was not without motivation. At the time, the local priest of Älvdalen, a Swedish town that looks like it belongs to a storybook, was investigating Gertrud because her small brother alleged that she had led a parade of goats across the water like Moses.

Gertrud named Märet as the person who had taught her witchcraft and also claimed that Märet had introduced her to the devil. During the trial, Gertud’s father declared that Märet had ridden him as a horse to Blockula. Märet’s little sister asserted during questioning that she and Märet had ridden cows to Blockula where they slaughtered them and slept with the Devil. Because she would not confess, Märet could not be executed at this point in time. But the witch craze continued to spread in Sweden and laws requiring confession for execution were soon modified. When she was again accused during the Mora Witch Trials she was declared guilty. In 1672 Jonsdotter was decapitated, as was the Swedish custom, before being burned. 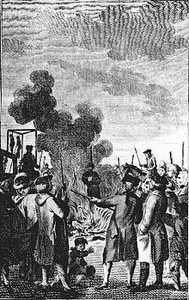 Unfortunate Malin Matsdotter, a Swedish witch who was burned alive at the stake, was the last victim of The Great Noise. No other person in Swedish history was burned alive for witchcraft. The guilty were customarily hung or beheaded before the corpse was burned, but this was not the case with Malin Matsdotter who refused to confess. Her trial took place in Stockholm, where it was believed that the witches were abducting children and taking them to the Witches’ Sabbath in the bloody meadow of Blockula.

Malin’s own daughters made the accusations and at the time she was accused, Malin was no more than a poor widow. In 1676 she was executed at Hötorget square in Stockholm alongside fellow witch Anna Simonsdotter. Legends say that she did not scream because witches feel no pain.