Certain things seem obvious to us. When we think of a building we think of only a small range of materials that they should be built from. Bricks and mortar, wood and stone seem the logical choices for most buildings. Since uniformity is dull we are lucky that there are those who think outside the box when it comes to building. Here are ten examples of exotic or unusual building materials. [NOTE: there is a competition in this list – see the last entry.] 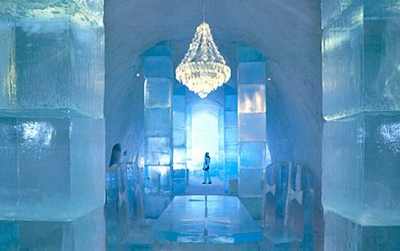 In Jukkasjärvi, a village in Sweden within the Arctic circle, each year a hotel constructed entirely out of ice is built. Every room is a display of art carved in ice. Even the beds are blocks of ice, though spread with reindeer skins. When the summer comes and the hotel melts visitors are offered the ability to stay in rooms of ice maintained in a freezer building. Because water has such a highly specific heat capacity it requires a large amount of energy to melt ice.

This is what allows buildings from igloos to palaces to be constructed from it. Ice is also remarkably strong. A rather grander building of ice was planned by the eccentric president of Turkmenistan, Saparmurat Niyazov. He ordered the building of a palace of ice near the Turkmen capital. Since the average temperature there is rather higher than it is within the Arctic Circle the project was more impressive. 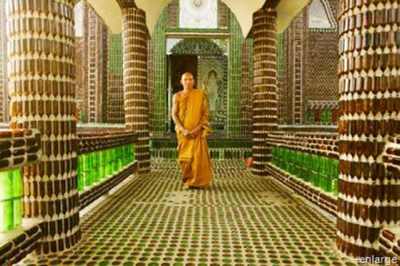 The Wat Pa Maha Chedi Kaew temple in Thailand is constructed from a million glass beer bottles. Decorative mosaics at the temple are constructed from beer bottle lids. The mixture of brown and green glass allowed the incorporation of intricate patterns within the temple’s walls. Since the walls are colored glass they allow for privacy but also a beautiful but diffuse light to spread throughout the buildings.

The monks who built the temple wished to highlight the wasteful nature of consumption and the possibility of reclaiming beauty from rubbish. Since glass is rather too brittle to make a complete structure, the temple does have a concrete core to support its weight.

8
House made from an airplane 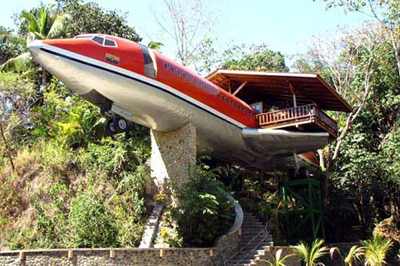 There are many houses made from reclaimed structures, such as disused water towers. There are houses made from retired train carriages. Most impressive for scale and boyish playfulness are houses which are built inside converted airplanes. Because airplanes are built to be robust they make surprisingly good buildings. Their exterior is strong and weatherproof and their interior is spacious once stripped of seats and storage compartments. Another factor in their favour is the low cost of buy a retired passenger jet.

Since a retired plane is of no value except as scrap metal, they can be had very reasonably. Because of the advantages converted planes have as homes there are now several companies which specialise in them. Perhaps they will not be so unusual in the future as they seem now. 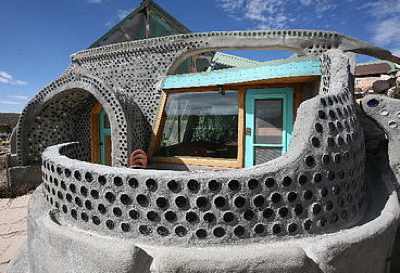 Millions of tires are thrown away every year. They are, in many ways, a perfect building material. They are as tough as they are plentiful and can be used as a stacking system for walls. Of course they need something packed within them for stability but there are houses that have been made from tires, filled with clay, and stacked like bricks.

Rubber, being highly insulating, makes a building constructed in this way cheap to heat or keep cool. For those worried about a rubber fire in their house it is possible to avoid this risk by coating them with plaster or concrete. 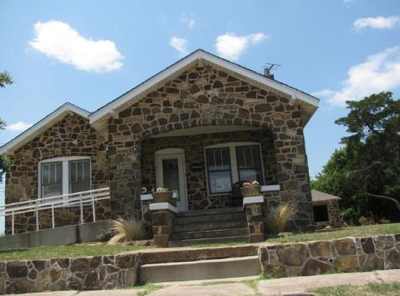 Wood is one of the oldest building materials known. Strong, flexible, renewable, and cheap it was the go-to material for our ancestors. For those who want to be traditional but crave the strength of stone there is a possibility. Petrified wood – trees that died eons ago and have been fossilised, has been used in several buildings as a material.

In Lamar, Colorado, there is a car dealership office made from lumps of petrified wood. The town of Glen Rose in Texas underwent a petrified wood building frenzy in the 1920s when large numbers of petrified trees were discovered. Now the town houses a Creationist museum, one assumes it is not built out of fossilised wood millions of years old… 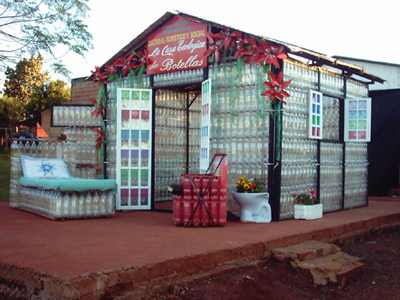 Recycling of materials will become ever more popular as resources become scarcer. A number of buildings have been made from plastic bottles. The benefit of using them is their extremely low cost and their ability to act as insulating materials. Air is a very good insulator, so sealed bottles of air will tend to keep heat in or out as desired. Since plastics resist biodegradation they can form long-lasting walls. It is not only small houses in impoverished nations which are using plastic bottles though. In Taiwan an exhibition hall was constructed from recycled bottles.

Many low cost houses in third world countries are built of corrugated metal and are dingy, to say the least. The only source of light may be the open door. To bring light into these homes a scheme called ‘Liter of light’ has been repurposing plastic bottles. Cutting a hole in the roof and inserting a plastic bottle will allow sunlight to radiate into the home and bring light indoors for people too poor to afford electricity. 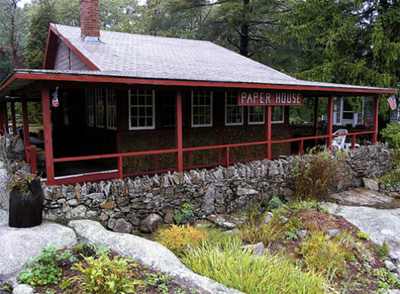 In 1922 Elis Stenman began building a house out of newspaper. The entire house, save for the wooden frame, is made of newspapers rolled and varnished. The paper provides excellent insulation and the varnish keeps the property from collapsing into a pile of mush. As well as filling in the walls with newspapers Mr Stensmen also built the furnishings from donated papers.

His purpose in building his home in this manner was a very modern one- he wished to highlight the waste of our society with regards to what we discard. 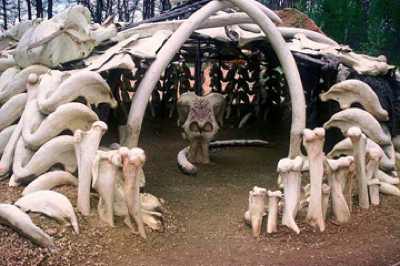 It would be incredibly expensive to replicate a building made from mammoth bones today since the source has become extinct. Our ancestors however had a plentiful supply of mammoth bones in the late Pleistocene. Making a circular hole in the ground the large bones of the mammoths were used to create walls that were lined with mud and probably leather from the same animals.

All that remains today of these buildings are the bones which formed the walls but it is probable that they resembled teepees, with a conical shape and a hole in the roof for smoke to escape from the fire used to heat them. 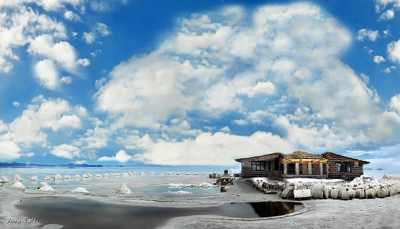 Salt was once so rare in Europe that it was used to pay soldiers’ wages; it is where we get the word salary from. In Bolivia there are massive salt flats and so no shortage of the substance. To build a house out of salt in Europe would be to court disaster as salt is, of course, soluble and so the first rain would wash your walls away.

In the high, and mostly dry, deserts where the salt flats exist there is no such danger. A hotel has been constructed of blocks of salt cut from the flats. Joining these bricks of salt together could not be easier. Simply wet the edge and press them together and the bricks will fuse. The hotel is much like the ice hotel mentioned earlier in that it is entirely constructed from salt – even the furniture inside. Seasoning your food at the dinner table should present no trouble. 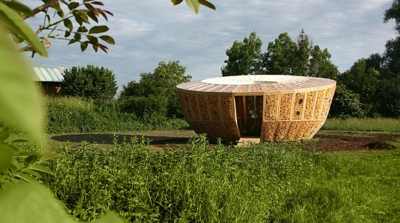 This building is merely a prototype and so cannot really be lived in at the moment. The construction is basically a wooden frame filled with dried corn cobs. The aim was to produce a cheap and biofriendly home. The architects managed to make it cheap- wood and corn are never expensive- but they have still to find a way to keep the rain and wind out of the building.

The key benefit of this building is that it is made from entirely renewable sources. It would also serve as an excellent source of popcorn on a movie night.

Who never built a house out of Lego when they were a child? I’m guessing that most of ours never exceeded a few inches in height. James May, of Top Gear fame, built a two story house it was possible for a person to live in. The house included a working toilet, thought I’m not sure I would trust the plumbing. The whole build took over three million blocks to complete.

The process of the building can be seen in the clip above. Unfortunately after the building was completed the house was demolished because no one wanted it. The millions of bricks were donated to charity. 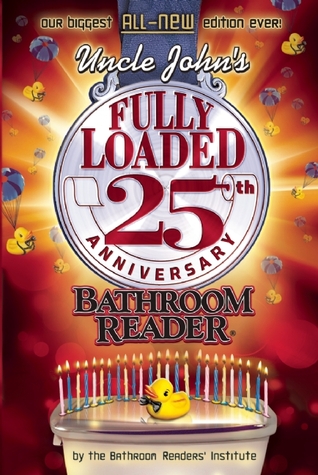 This is Jamie – the guy that started Listverse – and wrote a bunch of lists; I have rudely interrupted another awesome list from LordZB to bring you this competition. This year is the 25th anniversary of Uncle John’s Bathroom reader books (you probably know them – we have featured them before). We love the books – packed full of trivia and interesting stuff – kinda like Listverse – and they have very kindly given us a free copy to give away to our readers because we have so much in common! If you want to win the book simply like Listverse on Facebook and post a comment on this list and we will announce a winner at random tomorrow. If you don’t have Facebook… WTH is wrong with you? Everyone has Facebook! You can still comment though. And the competition is open to anyone in the world – it doesn’t matter where you live – but if you live in one of the houses above you get extra points.

I own a copy of this book and can guarantee you will love it. To whet your appetite for the book let me give you a hint what’s inside: Odd Vodkas (I am sad to say I have only drunk two of the nine listed – clearly I have some catching up to do), Failed Doomsday Predictions (that sounds familiar!) and Absolutely Stupid Crooks (hmm, that sounds familiar too). If you win the Book I will also send you a Christmas card specially signed by me. Just think – you can probably sell that on eBay for a few cents!

Oh – and if you don’t win you can still buy the awesome Uncle John’s Bathroom Reader book on Amazon.

[Winner]: The winner of this list is Caleb for his comment “I am amazed at how many high-quality lists LordZB can make in such a short space of time. Good work.” Congrats!