Over 600 guest stars have featured on The Simpsons since its inception way back in 1989 – more than on any other television show. A Simpsons guest spot is up there with getting a star on the Walk of Fame when it comes to celebrity credentials – and with so many celebrities having appeared on the show, there’s bound to be a few interesting stories. For example: 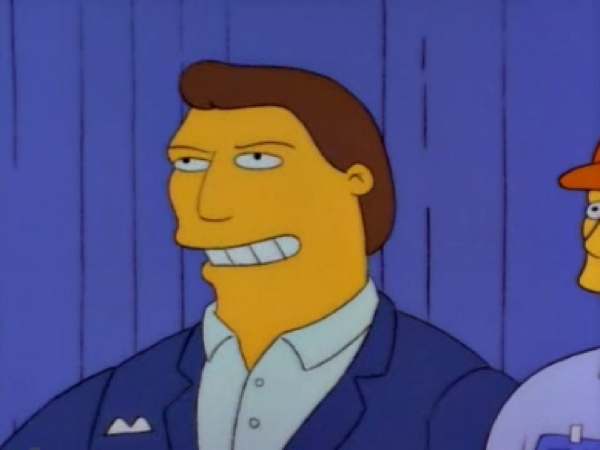 With so many off field dramas, including his own steroid use and the controversial tell-all book Juiced, in which he ratted out fellow baseball players for steroids, Jose Canseco is well known for being an unsavoury character. But when ‘Homer at the Bat’ first aired, starring him and eight other Major League Baseball stars, Canseco was one of the most popular power hitters in the game.

Unlike his co-stars, Canseco was extremely un-cooperative, and intimidated the cast. The famous scene where his misses the game after rescuing a lady’s possessions from a burning house came as a result of numerous forced rewrites, which were designed to make him as heroic as possible, as he disliked his original scenes. He also disliked his animation, but stated that the voice-acting was very easy.

Tough-guy actor Lawrence Tierney was famous for his portrayals of gangsters and hardened criminals in film, but his troubles off the screen made him legendary. He was frequently arrested for brawling, and was a self-confessed alcoholic. His indiscretions lead to him being imprisoned, and at least once he was stabbed.

True to form, his character in the episode ‘Marge be not Proud’ was just as intimidating – a towering, chain smoking security guard. During production, Tierney abused employees of the show and refused to perform lines when he didn’t get the jokes. Thankfully, the writers refused his request to change his character’s voice to an over-the-top Southern accent, and his performance remains one of the best and most subtle guest appearances on the show. 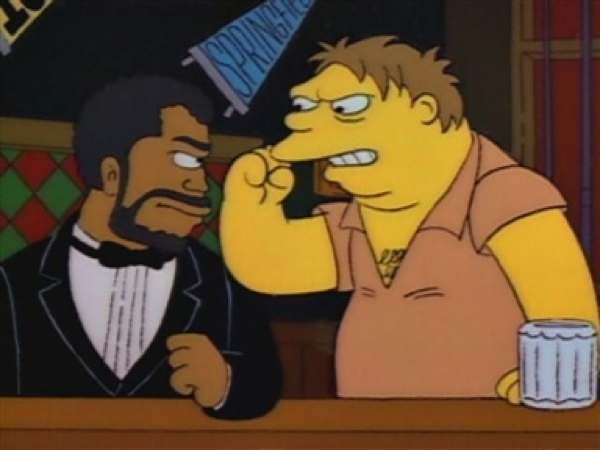 Smokin’ Joe Frazier is often considered to be one of the greatest boxers of all time. The former World Heavyweight Champion is known in the boxing world for his legendary fights with Muhammad Ali and George Foreman, and by Simpsons fans for his hilarious third season guest spot.

You might remember the great scene where he was provoked by Barney Gumble (“Hey Frazier, shut up!”) leading to a street fight outside. Originally, the joke was that Barney would knock Frazier out. However, Frazier’s son, not content with winning every ‘my-dad-could-beat-up-your-dad’ debate in history, opposed this scene and the roles were reversed – Frazier took the much-loved Barney outside and left him a bloody mess in a trash can.

Apparently Albert Brooks is an Academy Award-nominated actor, but until now I literally only knew him for his brilliant roles on the Simpsons – he steals the show in practically every episode he’s in.

Brooks is a semi-regular guest star, appearing in six episodes and The Simpsons Movie, and his effort as criminal mastermind Hank Scorpio is often regarded as one of the greatest guest star performances in Simpson’s history. Huge chunks of Brooks’ dialogue were improvised, including the entire hammock speech. Brooks was so well regarded for his improvisation that the writers barely bothered to work on his character’s dialogue, knowing that Brooks would say new lines in their place anyway.

Legendary Golden-Age actress Elizabeth Taylor was part of a significant fourth season milestone – providing the voice of Maggie’s first (and only) word. However, problems arose when Matt Groening and the producers found Taylor’s voice “too sexual” for a baby. After 24 takes, Taylor allegedly said “fuck you” to Groening and stormed out, although there are conflicting accounts of this. Whatever the case, she and the staff seemed to patch things up and she returned later in the season for a second guest spot. After her death in 2011, the Simpsons dedicated an episode to her.

‘New Kids on the Blecch’, starring boy band ‘N Sync now seems like an early indication of the show’s future direction – their frustrating tendency to cast storytelling aside in favour of transparent cameos from trending celebrities. Fortunately, the band did a decent job as far as these things go, and the episode is a good one.

‘N Sync were enthusiastic about appearing on the show, although Justin Timberlake had some reservations about saying ‘word’, as he thought it was misrepresentative of how he actually talked. In response, the staff replayed the one take where Timberlake actually said the phrase after almost every ‘N Sync line. 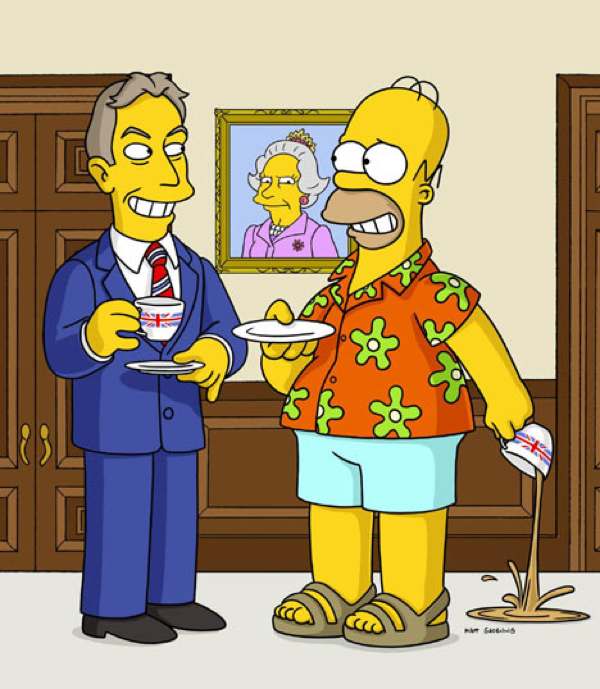 Season 15 marked the first time a Head of Government appeared on the show. After being denied an appearance by every U.S. President from Gerald Ford onwards, the Simpsons gave Great Britain a try and were rewarded with Prime Minister Tony Blair after much perseverance.

After eight months of negotiations and requested script changes, Blair finally agreed, giving showrunner Al Jean fifteen minutes to record the part on one day’s notice. Tony, we understand you’re a busy man, but what could be more important than guest starring on the greatest television show of all time – get your priorities straight!

There’s not much to say about Julian Assange that hasn’t already been said – he is dually seen as both a champion for democracy and a traitor of it. Everything the man says or does is taken ultra-seriously, but sometime between leaking classified military documents and hopping between countries, he found the time to appear as himself in the Simpson’s 500th episode.

Assange was under house arrest in England at the time, pending extradition to Sweden. Al Jean managed to acquire a phone number to call, but no information on his whereabouts. As a result, Assange’s lines were recorded over the phone and his voice sounds muffled. His performance isn’t really that great, but the magnitude and controversy of the WikiLeaks phenomenon makes his guest spot instantly memorable.

Stephen Hawking, one of the world’s greatest minds, suffers from amyotrophic lateral sclerosis, a disease which has left him almost completely paralysed. As a result, he speaks through a speech synthesiser. In spite of this disease, he has produced some of the most significant works in the history of physics and has admirably maintained the ability to make fun of himself, appearing in several Simpson’s episodes.

The crazy thing about his first appearance was his utter determination to take part – his wheelchair broke down days before he was due to record in Los Angeles, and he made his assistant and a technician work a 36 hour shift to get it repaired in time. When he arrived, he told the staff “Sorry for being late.” 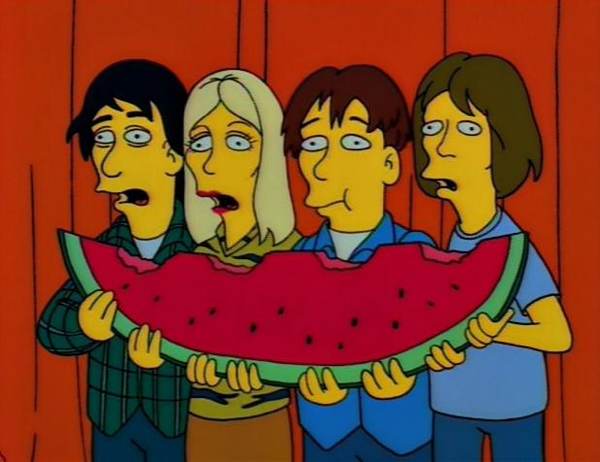 The episode ‘Homerpalooza’ from the Simpsons’s seventh season is one of the show’s greatest episodes, and starred a myriad of 90’s music icons – evidence that despite contemporary criticism of the show, huge rosters of guest stars don’t necessarily make for a bad episode. Those featured are pioneering rap group Cypress Hill, alt-rock icons Sonic Youth and Smashing Pumpkins, and singer-songwriter Peter Frampton. Originally, the Courtney Love fronted band Hole was wanted for the episode, but one of the bands (later revealed to be Sonic Youth) stated that if Love appeared in the episode, they would not. It is unclear exactly what the disagreement was over, but the band was friendly with Love’s late husband Kurt Cobain.