David King recently published a stunning book called “Russian Revolutionary Posters“, which traces the history of these striking propaganda pieces from the Russian Revolution through to the Space Race. As someone who was taught history from a Western perspective – with the Soviet Union often misunderstood at best, or mistrusted at worst – I found it fascinating to get a glimpse behind ideological lines.

No matter how stark the contrasts might seem between “us” and “them” (even today, the Pussy Riot trial has brought this way of thinking into the foreground), it’s never difficult to find evidence that there’s no meaningful difference in the way people of different nations think and feel. These posters seem to be ample evidence of that. 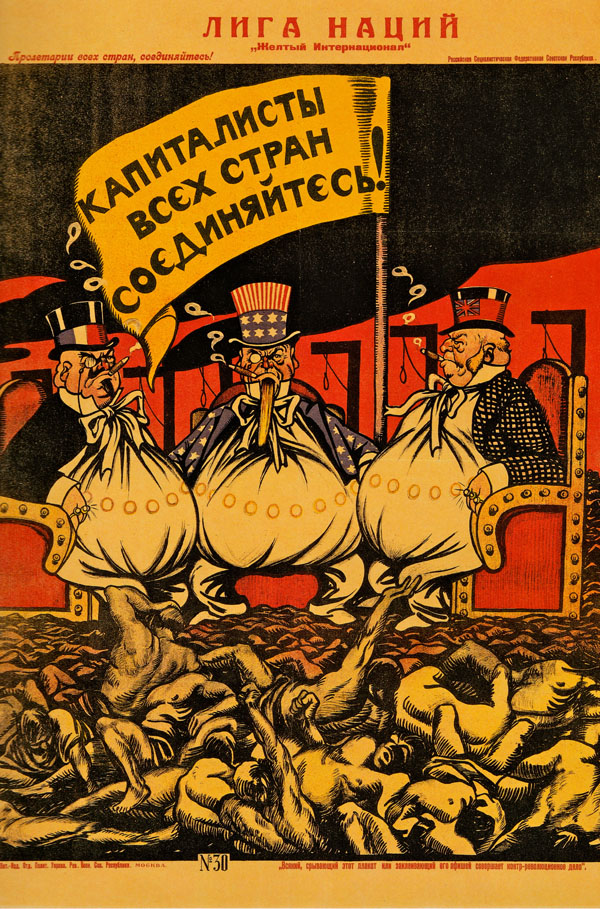 This poster was created two years after the close of the First World War, which had seen the formation of the disastrous Treaty of Versailles at the Paris Peace Conference. Neither Germany nor the new communist government of Russia had been invited to attend. The Paris Peace Conference also gave rise to the League of Nations, savagely attacked by Victor Deni in this memorable poster. 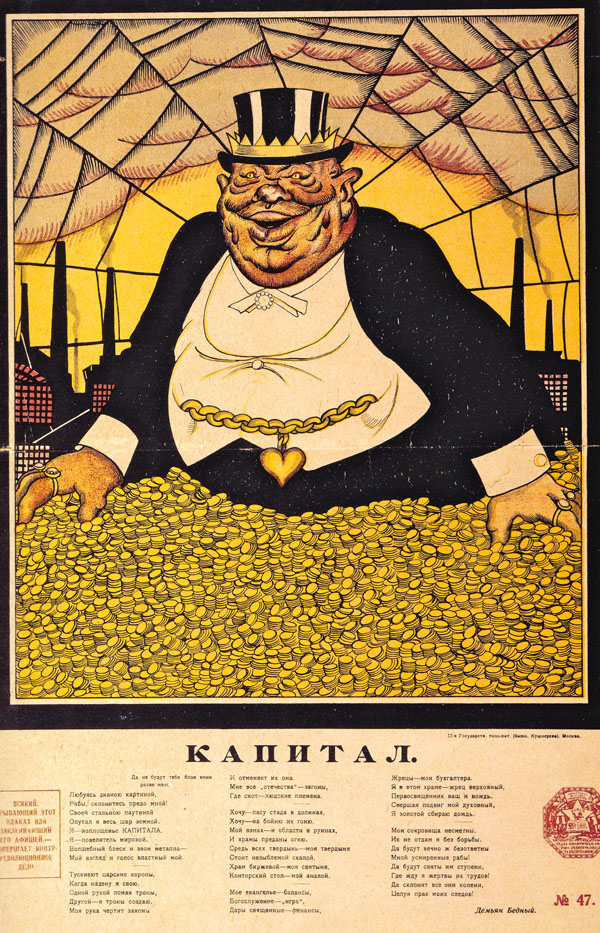 According to the red text at the bottom of this famous anti-Capitalist poster – also by Viktor Deni – “Anyone who tears down this poster or covers it up is performing a counter-revolutionary act.”

13
Every Woman Should Know How to Raise a Child Properly
Alexei Komarov, 1925 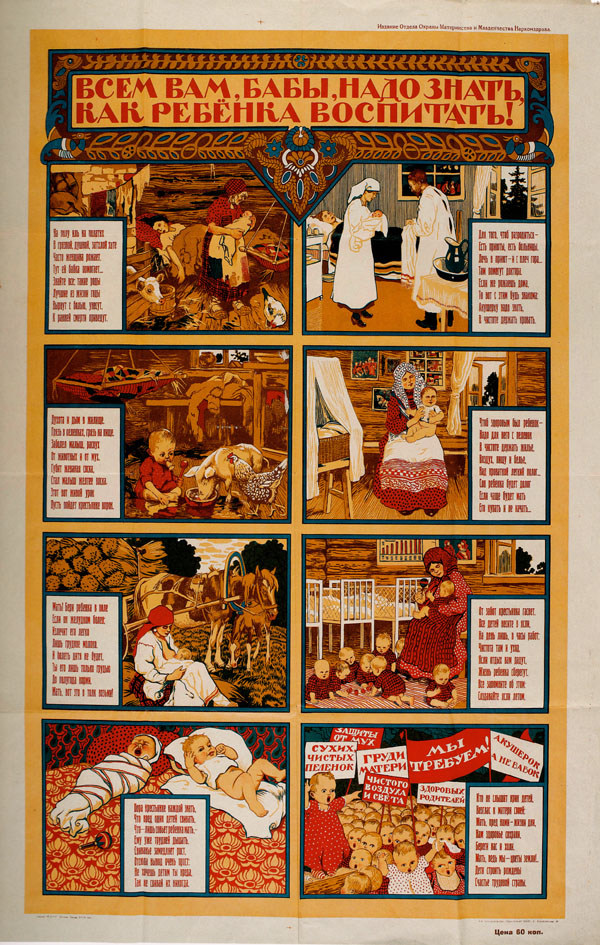 Contrasted here are two different ways of rearing children: the left column follows the life of a child raised in poor conditions, while the column on the right demonstrates the proper way. Although serfdom had been abolished by Tsar Alexander II in 1861, Russia in 1925 still boasted a largely rural – and relatively uneducated – population of “muzhiks”, or peasants. A large part of Soviet propaganda was therefore devoted to educational initiatives, especially in the crucial area of healthcare. The revolutionary babies at the bottom of the right column are testament to the advantages of modern medicine. 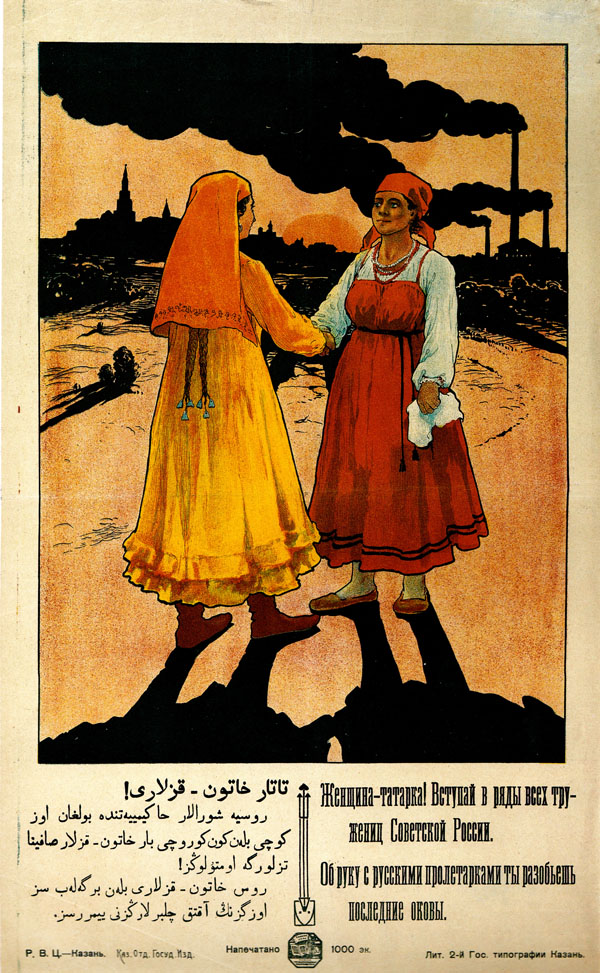 “… Arm-in-Arm with the Proletarian Women of Russia, You will Finally Break off the Last Shackles.”

The ethnic groups whose home lay on the periphery of Russia, such as the famous Cossacks, had always played a large part in its military defense. Tatarstan actually lies quite close to the cultural heart of Russia, but managed to retain for centuries its own Islamic culture and Turkic language.

This poster, which features Tartar script as well as Russian, encourages Tartar women to abandon the “shackles” of tradition in favour of the factories and furnaces of modernity. Part of the Soviet drive to assimilate the Tartars involved discouraging the traditionally subservient role of women. Gender equality thrived in many aspects of Soviet life (though women were notably absent from high state politics.) 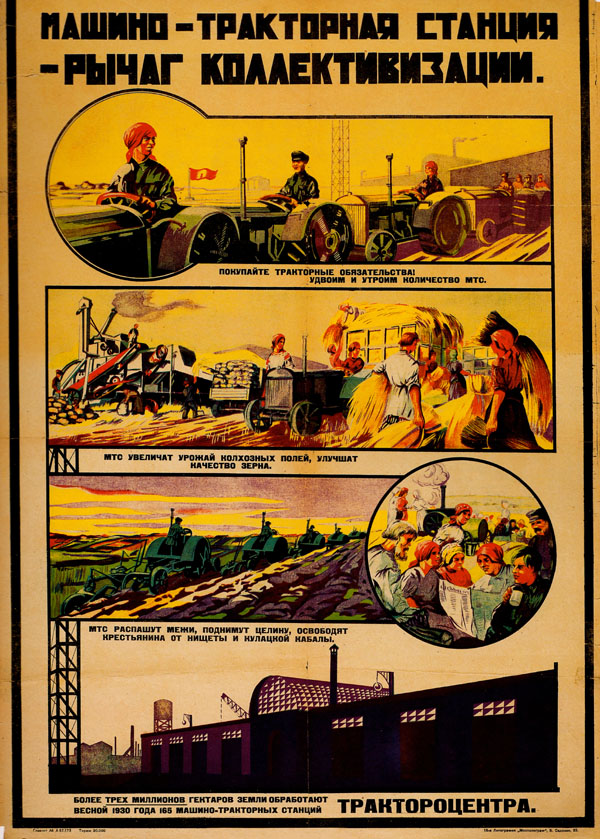 “The Machine-tractor Station is the Linchpin of Collectivisation. Get a Tractor! Let’s Double and Triple the MTS.”

Machine-Tractor Stations (MTS) were part of Stalin’s efforts to collectivise farms across Russia. Rich peasants – who by the sweat on their brows had accumulated more land than was acceptable – were attacked by Communist policy and propaganda alike, as friends of the capitalists and enemies of true peasants.

Note the dutiful workers reading a newspaper together during their break: self-taught literacy was often encouraged in this manner, especially among the labouring class. Of course, literacy didn’t necessarily entail freedom for the workers to read whatever they liked. 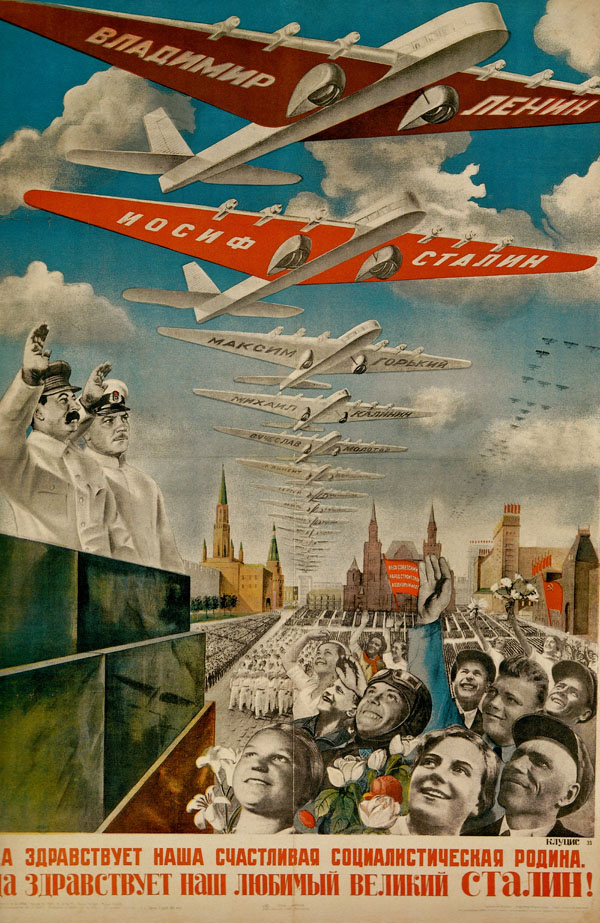 Five years later, during the war, Stalin’s face wouldn’t be featured on so many posters. The Russian people couldn’t forget the sinister policies, the sweeping purges, and the brutal coercion he had imposed upon them between 1935 and 1940 – which were hardly masked by images of utopia such as this.

9
We Will Eradicate the Agents of Fascism
Sergei Igumnov, 1937 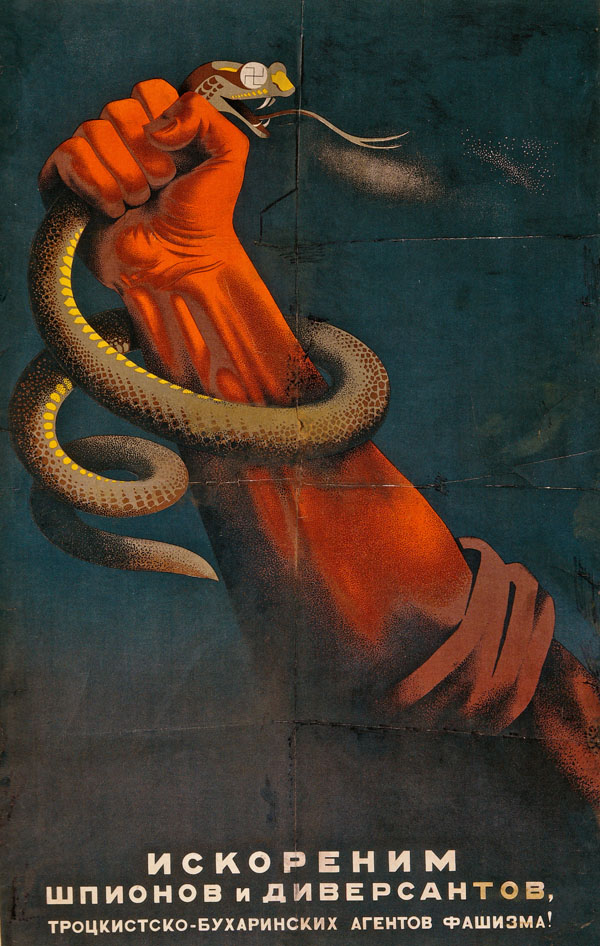 “We Will Eradicate the Spies and Saboteurs, the Trotskyist-Bukharinist Agents of Fascism.”

This poster was published on behalf of the NKVD – the Soviet Secret Police – during the infamous Show Trials in Moscow. Stalin went on to personally direct what became know as the Great Purge, and later as the Great Terror. According to the propaganda of the time, the purge was a cleansing of the rotten elements in his government. But in reality, he meant to systematically suppress the voices of anybody he perceived as a threat to his own power. It’s a scary thought: propaganda posters such as this one could be used very effectively to keep the tide of opinion in his favour, despite the bloodshed. 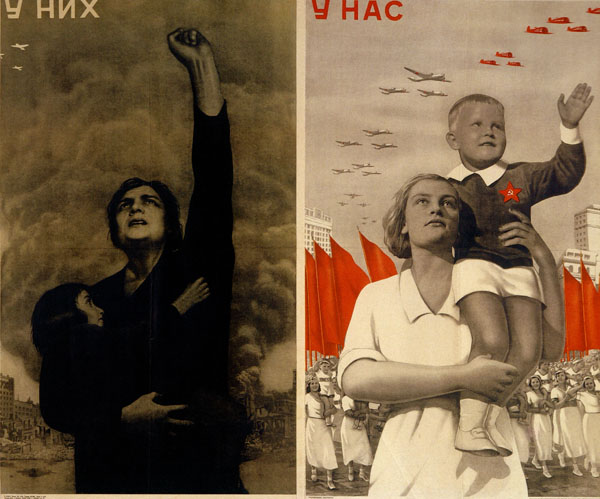 Just before WWII, the end of the Spanish Civil War had seen a Nazi-backed Fascist government come to power, after the irresponsible western powers, Britain and France, refused to offer military assistance to the Spanish Republicans. Many left-leaning writers and artists from the west, most famously George Orwell and Ernest Hemingway, had volunteered to fight for the Republican cause. The collapse of the socialist Spanish Republic, and the suffering endured by its citizens during the war, was an emotional subject for many Russians.

By 1941, not only Spain but also France, Belgium and the Netherlands had fallen under Fascist rule. This double-imaged poster contrasts the tragic fate of these western countries with the strong, stable and prosperous society established in Soviet Russia under Stalin. 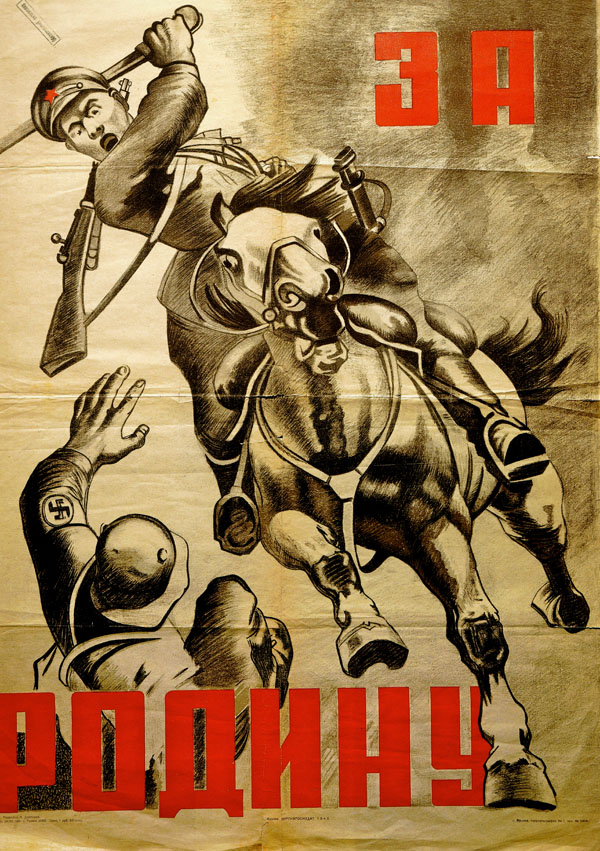 To the Russians, WWII was known as the Great Patriotic War. Less than six months after the poster above this one was published, Germany had abandoned its former understanding with Russia, and invaded. Much of Germany’s eastern-front fighting over the next three years took place on Soviet soil… 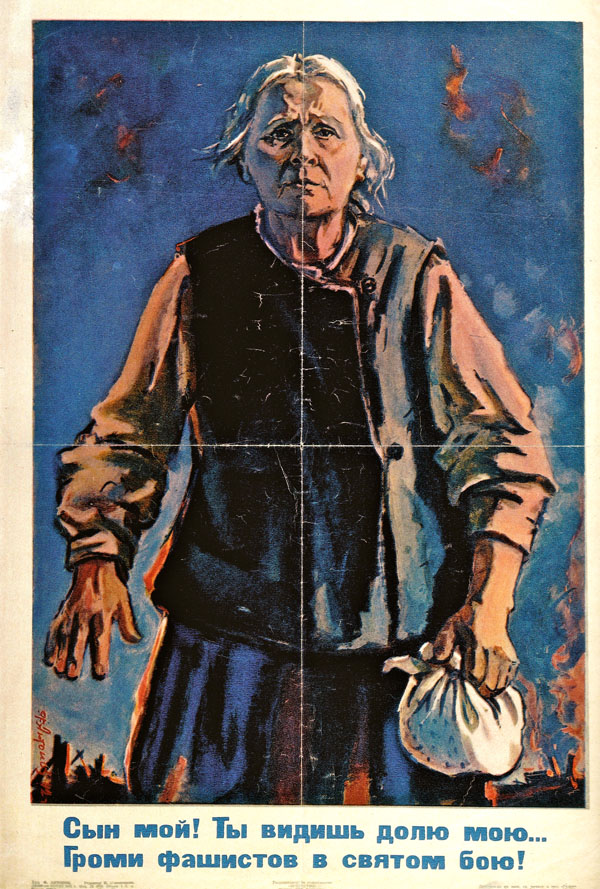 Red Army soldiers knew that they had everything to lose in the war with Germany. Behind this old woman are the smoldering remains of the family home; she implores her son to save the country. 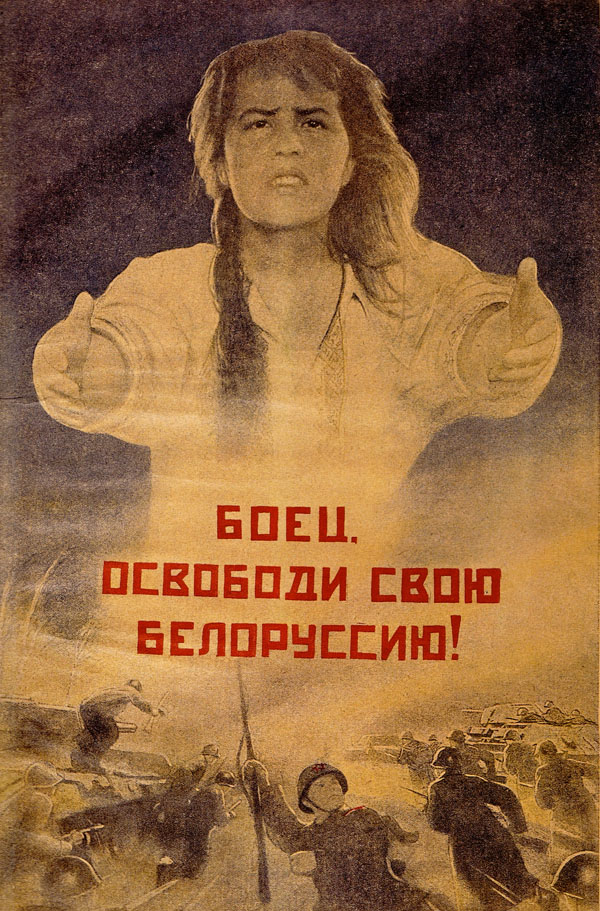 It can be imagined how powerful this poster might have been for Russian soldiers, a large part of whose country had already been invaded, occupied, and ruined by Nazi soldiers. Imagery as simple and moving as this could draw even peaceful men to war.

4
All Hope Lies With You, Red Soldier
Viktor Ivanov and Olga Burova, 1943 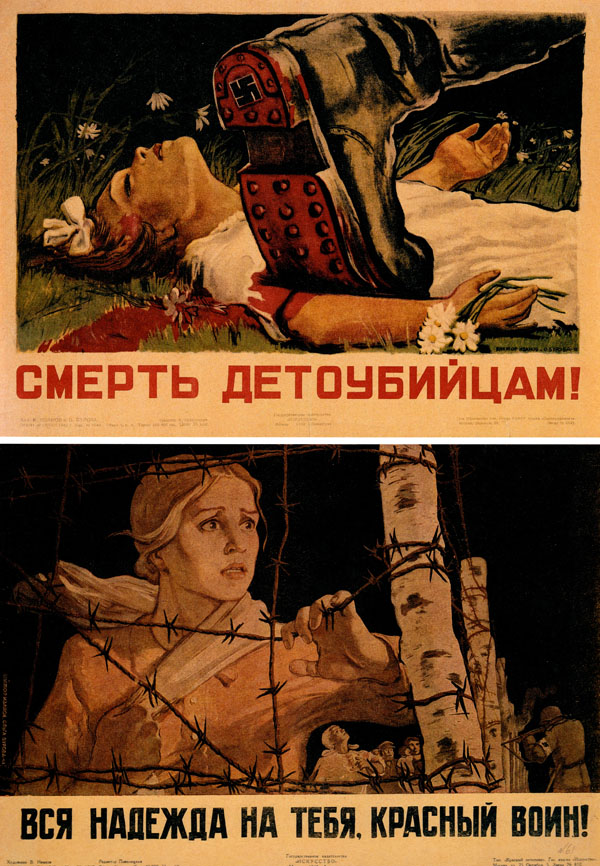 As with numbers 5 and 6, you need to look no further if you want to understand why many people go to fight in wars. For the ordinary soldier, the war was not so much about ideological allegiance as it was about protecting the ones they loved. The frightening images here weren’t designed to show what could hypothetically happen, if the war was lost; they showed what had already happened (see entry #3 on 10 Lesser-Known Iconic Photos of World War II). 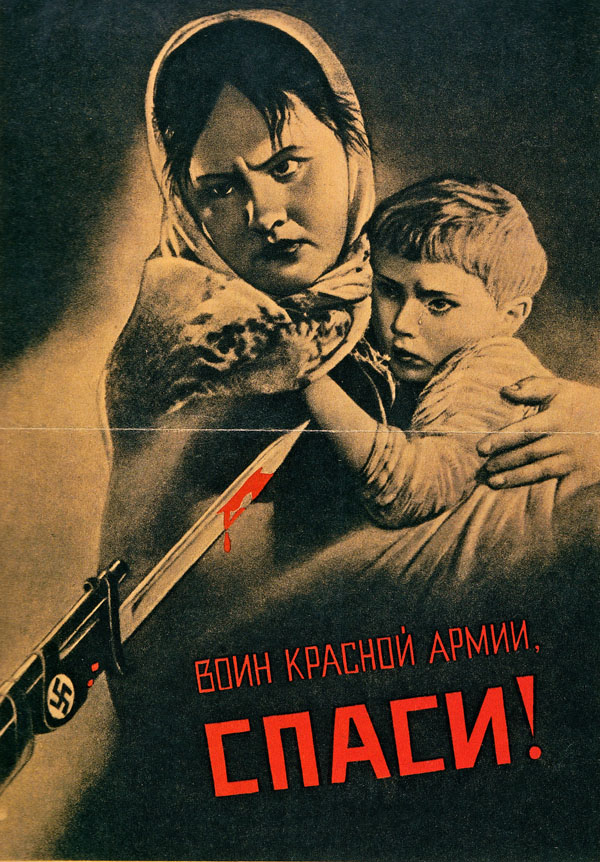 The imagery in the WWII posters is generally far simpler than those of the propaganda campaigns of the 20s and 30s. The propaganda posters were indoctrination campaigns, targeted at certain groups of people, aiming to convince them of certain things that they might not otherwise believe.

But images like this one did not need to be complicated in order to have the desired effect. Koretsky, the artist who created this poster, received letters from soldiers on the front: they “kept his poster folded in the left-hand top pocket of their uniform, next to their heart, just as icons had been kept by their fathers before them.” 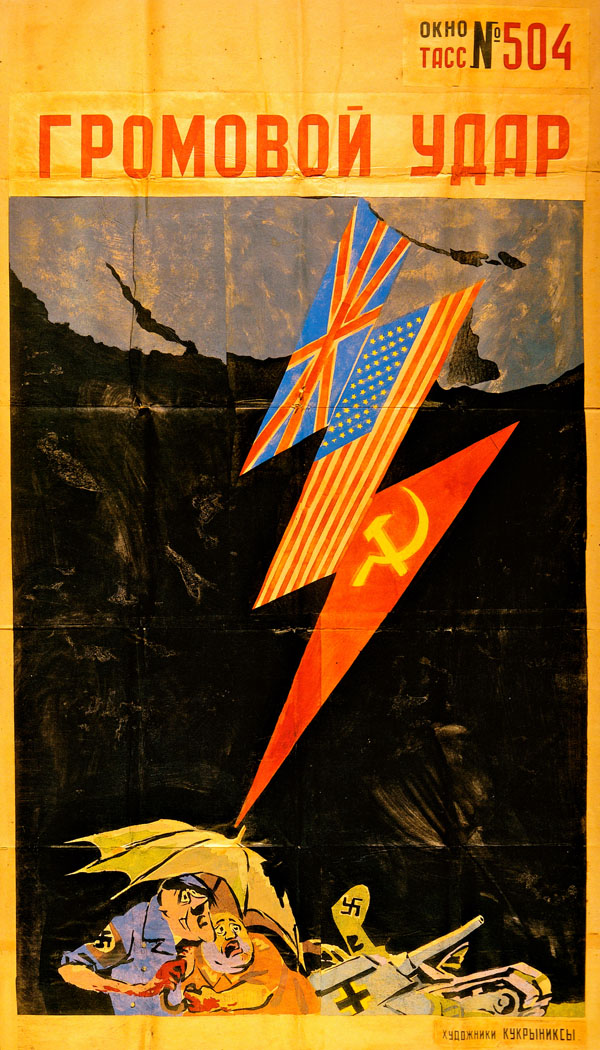 Many of these hand-painted posters were pasted over windows for propaganda purposes. Despite initial and unexpected friendship with the Axis powers during the war, Hitler’s surprise invasion of Russia had resulted in a strong alliance with the U.S. and Britain. 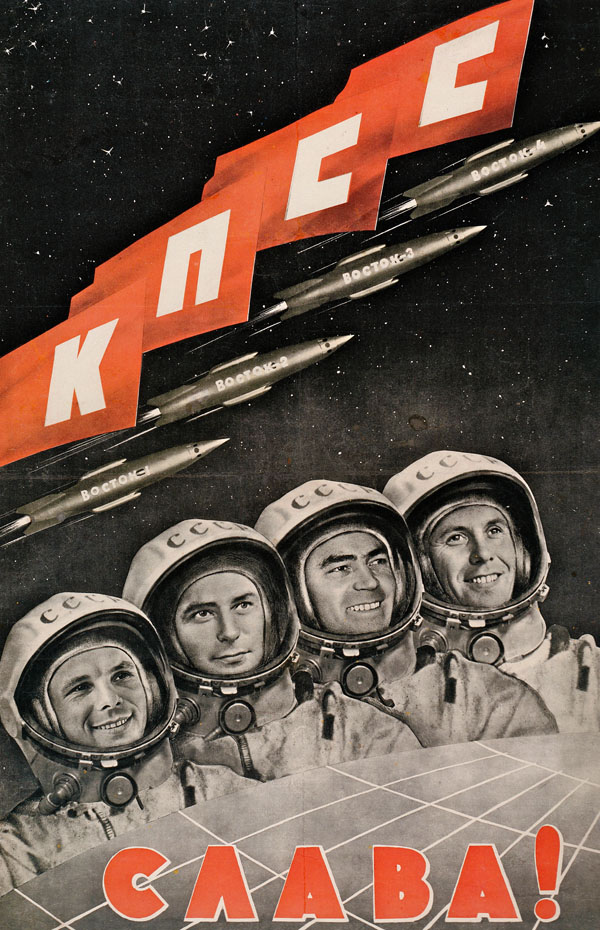 KPSS stands for “Kommunisticheskaya partiya Sovetskogo Soyuza” – the Communist Party of the Soviet Union. This poster celebrates a series of feats, which intensified the space race and redefined the whole Cold War. On the left is Yuri Gagarin, the first man in space. To his right is Gherman Titov, the first person to spend a whole day in space. They are pictured alongside two other cosmonauts who made it to space. The achievements of these men both shocked and excited people in the U.S., and played a major role in Kennedy’s decision to prioritize sending a man to the moon.