There are many iconic photos that emerged from the Second World War. Many of the people in these photos are instantly recognizable – Churchill flashing the “V” for victory sign, for example. In other photographs, however, you may not know the name of the people depicted – the sailor kissing the nurse on VJ Day, the Marines raising the flag on Mount Suribachi on Iwo Jima – but you definitely know the story.

Ten of those somewhat lesser-known photographs are presented here, along with the fascinating stories of the people in them. 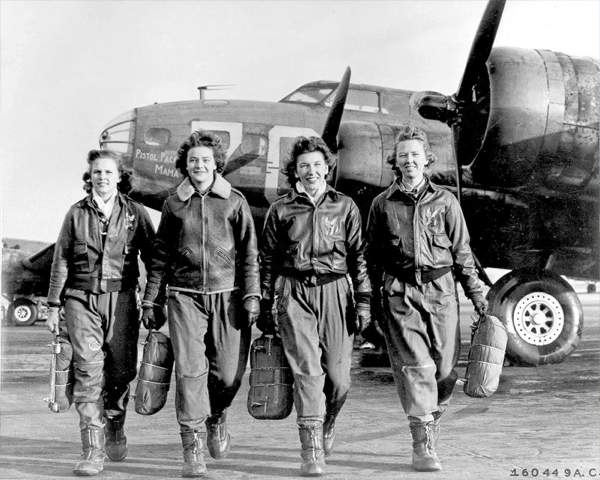 This WWII era photograph was used to show Americans that women were doing their part to fight the war – even when they really weren’t. The four women pictured here, in front of the famous “Pistol Packin’ Mamma” aircraft, were part of the Women’s Airforce Service Pilots program – better known as the WASPs. One of the four – the farthest on the right – is Blanche Osborn Bross.

The WASPs were a very exclusive club. Over 25,000 women applied for the program, and only 2,000 were selected of which barely 1,000 graduated and became pilots. Though they did not see wartime action, some of them did die in airplane accidents. After the war, Blanche Osborn Bross continued to fly, and later served with the Red Cross in China. She died at the age of 92. 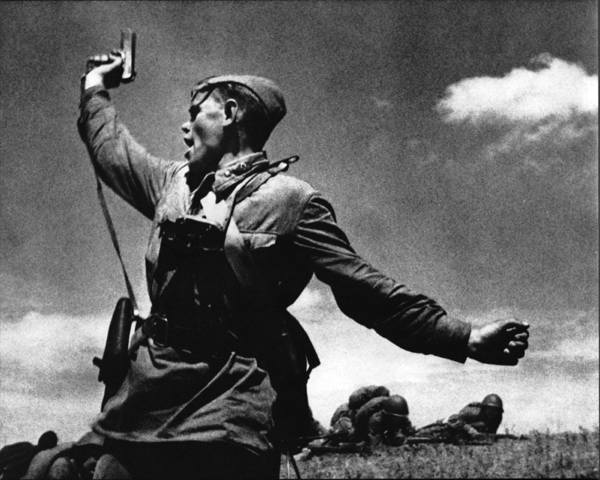 This Soviet WWII photograph was unidentified for 23 years until the man in it, Aleksey Gordeyevich Yeremenko, was recognized by his wife and children when they saw the photograph in Pravda. It remains one of the most iconic photographs of World War II. Yeremenko was a junior political officer serving with the 220th regiment of 4th Rifle Division. On July 12, 1942, the commander of his regiment fell during battle. Rallying his troops to the attack, Yeremenko stood and waved them on. Seconds after this photograph was taken, Yeremenko was shot dead. 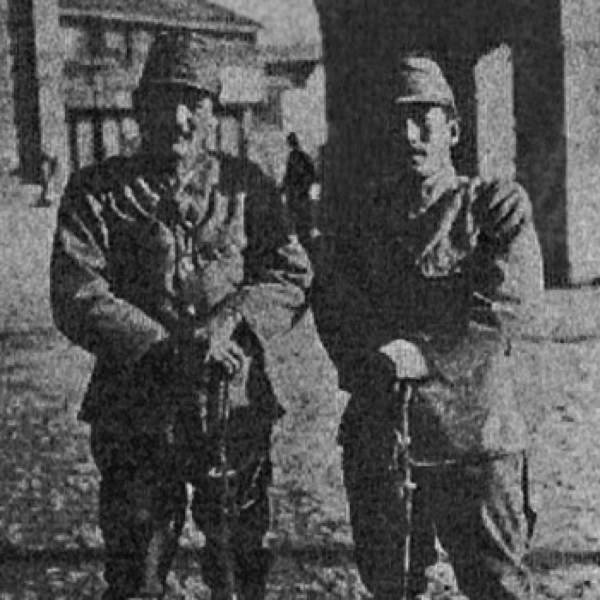 Many WWII photographs are shocking because of what they depict (“The Last Jew of Vinnitsa” for example). This Japanese photograph is shocking because of what it implies. Seen here are two Japanese officers, Toshiaki Mukai and Tsuyoshi Noda, each leaning against his Samurai sword. The photograph was widely shown in Japanese newspapers in 1937, and depicted a “contest” between Mukai and Noda to see who could be the first to cut off 100 heads.

The photograph and story came from about the time of the Japanese invasion of China and the slaughter and rape of Chinese cities such as Nanking, where the Japanese army systematically raped and killed untold thousands of civilians and Chinese prisoners of war.

The newspaper articles tried to describe the killing contest as being performed during “hand to hand combat”, but in all likelihood, the beheadings by sword were carried out on helpless civilians and prisoners. Later editions of the newspapers stated that each had broken the “100 head” goal, and were therefore resetting the goal to 150 heads. After the war, one of the men admitted that only four of the beheadings had taken place during combat – most of his total came from passive, lined-up Chinese prisoners. After the war, both Mukai and Noda were executed for war crimes. 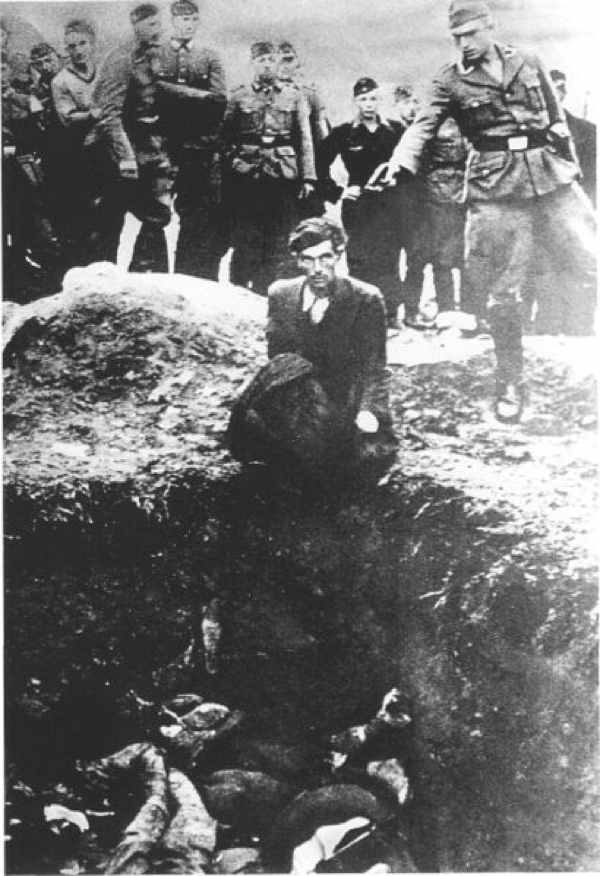 On September 16 and September 22, 1941, the Nazis rounded up all of the Jews in the town of Vinnitsa, Ukraine, and executed them. Pictured here in this famous photograph we see a man, kneeling before a pit filled with bodies, about to be shot by a German soldier. This photograph was found among a German soldier’s photo album, and on the back was written the title “The Last Jew of Vinnitsa”.

A Wehrmacht officer who observed the slaughter described it in all its horror. The people were told to show up at the already dug pit for a “census”. They were then forced to disrobe and turn in all their belongings. A row of naked people were then lined up along the pit, and mowed down by German soldiers using pistols. The next group would be ordered to shovel quicklime onto the still-writhing bodies in the pit, then repeat the process of undressing, turning over their valuables, and being shot – until each and every one of them joined their families and neighbors in the pit. All 28,000 Jews from Vinnitsa were killed in this manner. 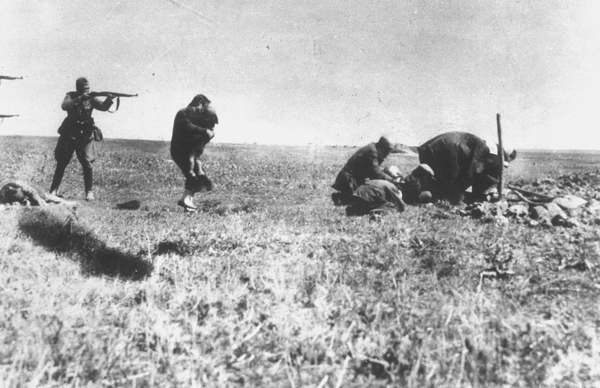 So many images from World War II, like this one, do not have captions detailing who was in the photograph. In some cases, photographers quickly snapped photographs of soldiers who were on the move or in action. The photographers never had the time to ask their name, company, or other information.

Other images, similar to this one, were never documented because of what they depicted. Though the year and campaign are given for this tragic photo, there is little wonder why the name of the woman and her child were never recorded. They were about to be executed by a German soldier. Who were they? All we know is that the photograph was taken in the Ukraine, and shows the execution of Jews from Kiev. Mailed from the Eastern Front back to Germany, the photograph was intercepted by a member of the Polish Resistance who kept it as documentation of German war time atrocities. The only description written on the photograph was “Ukraine 1942, Jewish Action [operation], Ivangorod.” 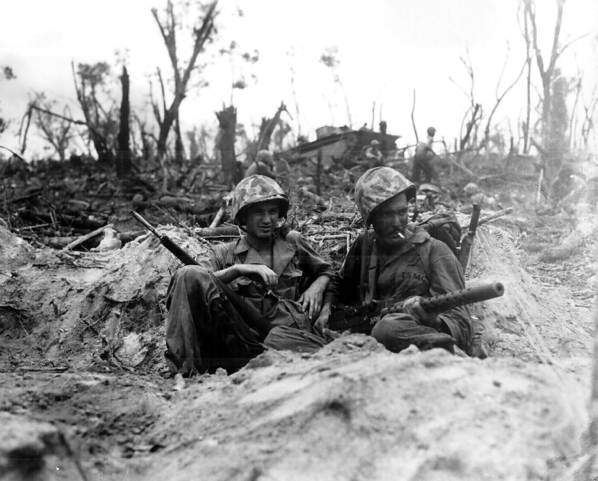 Though largely over shadowed by the bloody fighting the U.S. Marines and Army encountered on other islands such as Okinawa and Iwo Jima, the battle for Peleliu Island in 1944 was just as bloody – maybe even more so. The fighting on Peleliu was sheer butchery on both sides. The US Marines and army would suffer 6,800 casualties, the Japanese army at least double that.

Captured here in an iconic photograph of WWII, on September 15, 1944, are two Marines enjoying a brief respite from the constant battle. Gerald Churchby (later found out to be Thursby) and Douglas Lightheart are sitting in a shell hole, with the jungle of Peleliu shattered and broken all around them. That’s private Lightheart from Michigan, sitting holding the large machine gun in his lap, with a cigarette butt hanging from his mouth. The look in his eye is one of acute awareness, as if the enemy were about to attack at any second (which they probably were). Sitting to his right is private Churchby, seen holding his rifle with a far more casual and unconcerned look. Maybe he was just trying to smile for the picture? 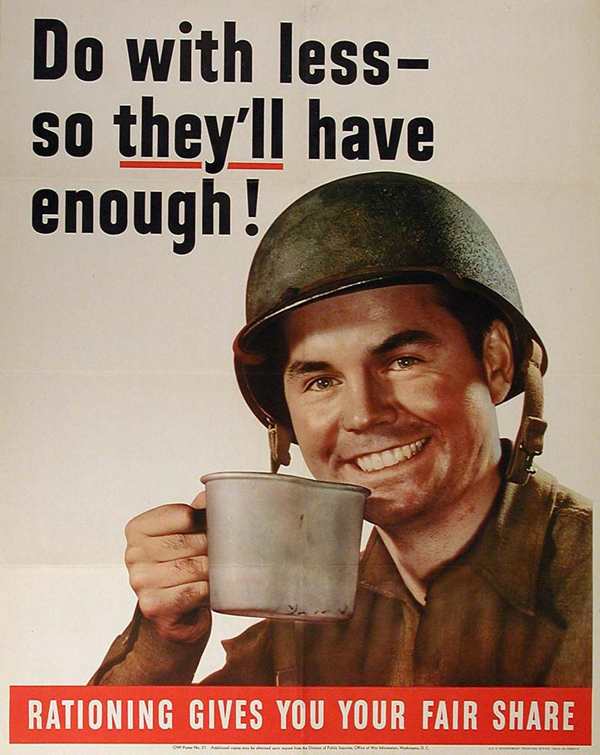 Thomas Murray would do his part to win WWII by being the poster boy for rationing. During the war, Americans had to use ration stamps to buy all manner of goods that were in short supply, because these goods were needed for the war effort. Coffee, butter, rubber, and many other staples were hard to come by. The US used poster campaigns to put a face on the soldier who was fighting for the country and who needed these goods, as a way to encourage Americans to make sacrifices and tolerate rationing. This iconic photograph of Murray smiling to the camera and holding a military cup of “Joe” was one of the most popular “support rationing” posters of the war effort. Murray died in 2002 at the age of 87, and was buried with full military honors.

Murray’s face would later be used in another war effort – the war (still ongoing) for Internet discussion board civility. A copy of the poster, with the words changed to “How About a Nice Big Cup of Shut the Fuck Up” (Think Before You Say Something Stupid) was – and still is – commonly used on discussion boards to try to shame trolls into thinking before they post. The rationing effort was far more successful. 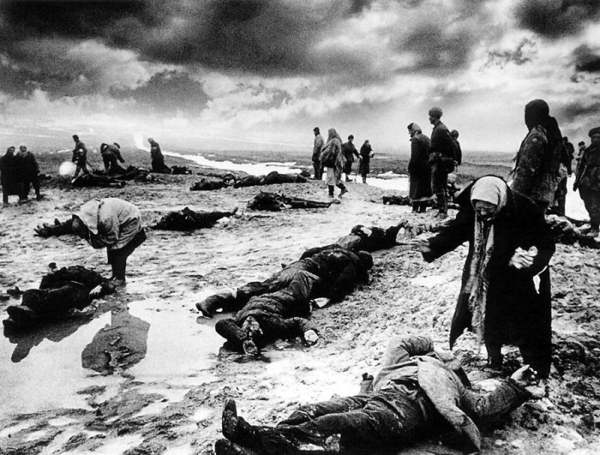 Not much is known about this iconic World War II photograph, but to many it is instantly recognizable, and is titled simply “Grief”. The photograph was taken by Soviet photographer Dmitri Baltermants. He photographed many Soviet battles including Stalingrad, and he himself was wounded twice. All of his photographs were censored by the Red Army. Only the ones that fit into the Soviet propaganda campaign would be published. Though this photograph was sent around the world during WWII, few newspapers or magazines would publish it, considering it to be another piece of staged Soviet propaganda.

The photograph did not become widely known until the 1960s, and is now one of Baltermant’s most famous images. Shown is the aftermath of a German army massacre of Jews in Kerch, in 1942. The village women search the bodies for loved ones. The brooding, saturated sky adds to the drama of the photo. The woman standing with her arms out would later find the body of her murdered son. 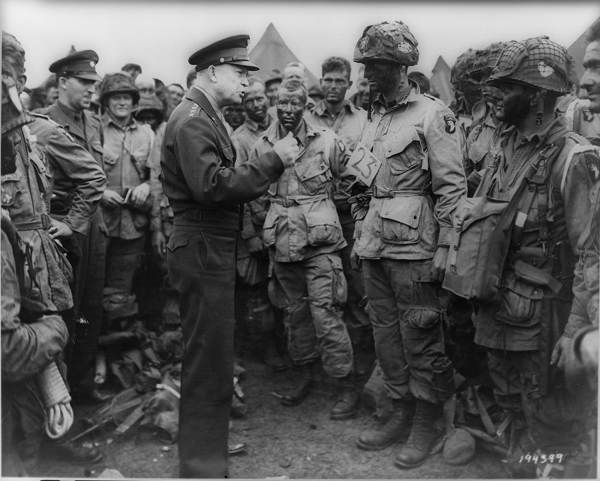 Everyone recognizes General Dwight D. Eisenhower in this famous image. He is seen here addressing American paratroopers on June 5, 1944, the day before the D-Day invasion of Europe. The tall man standing directly in front of Eisenhower and wearing the #23 around his neck was Lt Wallace C. Strobel. Strobel was part of an airborne infantry regiment that parachuted behind enemy lines, the night of the D-Day invasion. Of the 792 men in Strobel’s regiment, only 129 would still be fighting six days later. One of those 129 was Strobel. He died in 1999.

Strobel remembered meeting Ike. He and the other paratroopers had smeared burned cork or cooking oil over their faces, to blacken them for night-time operations. The number hanging around his neck was meant to designate his assigned plane. Strobel was the jump master for his plane. He and his fellow crew were making last minute preparations for the mission when Ike appeared and walked straight up to him. Ike asked him what state he was from, and whether or not he felt ready for the mission. Strobel told Eisenhower that he was from Michigan – and yes, they were ready. Eisenhower responded that he had been to Michigan, and loved the fishing there. Though Strobel felt Eisenhower had come to try to reassure the men and lift their spirits, it actually seemed to be they who lifted Ike’s spirits. Strobel remembered how well-trained and prepared they were, and that their confidence had a real calming and reassuring effect on Eisenhower. 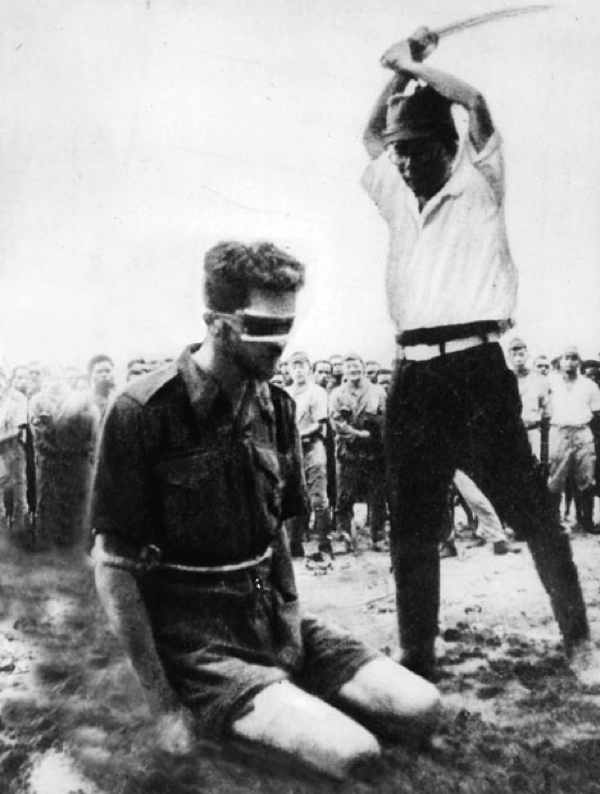 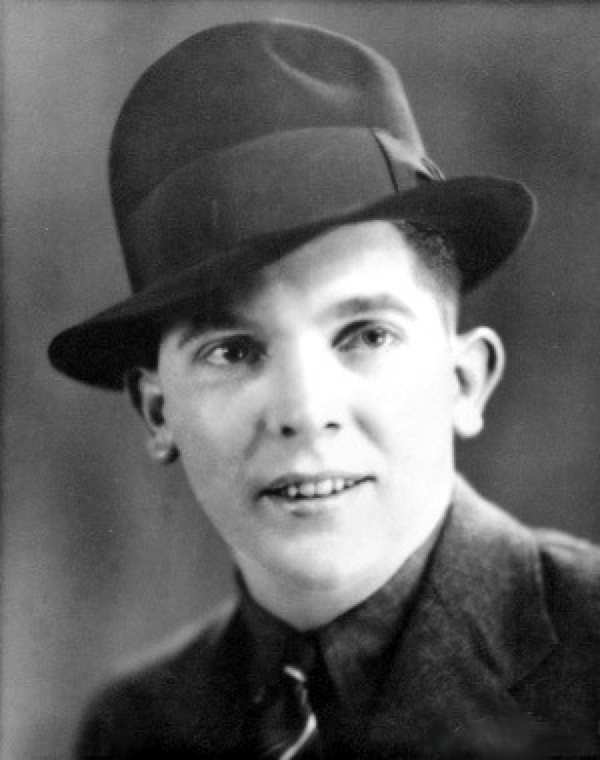 Sergeant Leonard Siffleet was a commando fighting with the Australian Army in New Guinea when he was captured by natives, who turned him over to the occupying Japanese army. Trained as a radio operator in the Special Forces, Siffleet was part of a secret surveillance detachment sent to New Guinea to watch the coast and report back on enemy activities.

After they were turned over to the Japanese, they were held for about two weeks, tortured, and then – on October 24, 1943, on the orders of Vice-Admiral Michiaki Kamada of the Imperial Japanese Navy – Siffleet was executed by beheading. He was beheaded by a Japanese officer, Yasuno Chikao. Chikao ordered another soldier to photograph him while he performed the execution. U.S. forces later recovered the photograph from the body of a Japanese major, in April 1944. Though the Japanese often executed prisoners by beheading (see Toshiaki Mukai and Tsuyoshi Noda above), this is the only known surviving photograph documenting the beheading of a prisoner.