Since 2008 the United States has been in economic trouble. The current debate over the “fiscal cliff” has placed this economic distress and its origins back on the public radar. In retrospect, the origins of the housing bubble and Wall Street meltdown seem inevitable. There have been numerous financial meltdowns in the past that have their origins in even more bizarre and obviously flawed schemes. From ancient times to the present we seem to fall for economic schemes and the disasters that often result. This list takes a look, in chronological order, at some of the most intriguing economic collapses of history. We can feel a little better about our current situation as we consider the mistakes of our ancestors.

The Roman Empire was in decay when Diocletian became emperor in the fourth century. The economy was in disarray from a series of costly wars and previous emperor’s building projects that left Rome near collapse. With Rome’s currency worthless, Diocletian introduced a new system of coinage. At many times in history countries have risked economic turmoil to artificially increase the value of their currency. The issue with Diocletian’s new money, however, was that it did the opposite. There was more gold in the coins than the face value stamped on them; the denomination on the coin lowered its value. In response to this insane idea most citizens melted the coins to make use of their higher scrap value. The result was rapid inflation within the Empire. Diocletian increased problems by placing a price ceiling on most goods to counter the inflation.

Diocletian’s policies caused so much confusion that many Roman territories simply refused to follow the emperor’s edicts. As matters worsened, Diocletian became the first Roman emperor to voluntarily leave the throne. His highly flawed economic policies weakened the cohesion of the empire and the status of emperor in addition to further damaging Rome’s ailing economy. 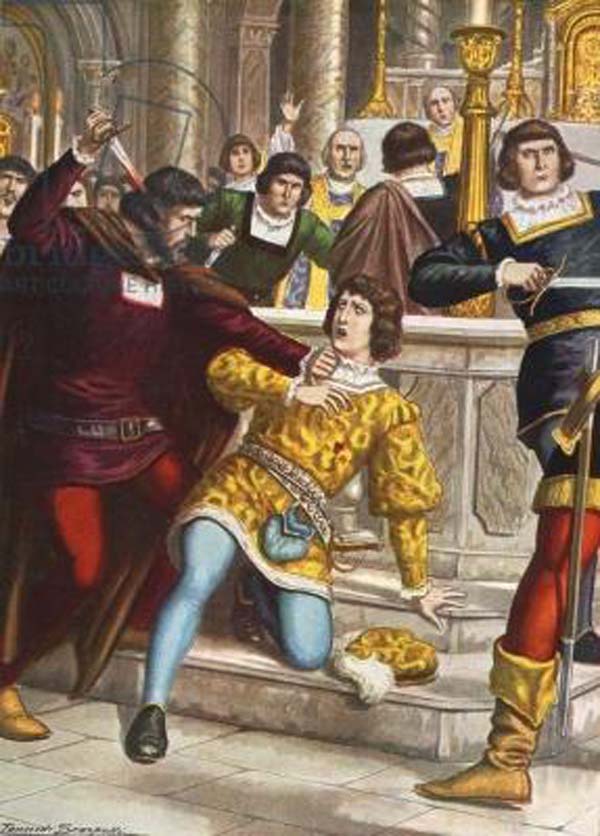 The Medici family was one of the leading families of Renaissance Italy. They controlled the politics of Florence; served as popes and assisted the rise of Leonardo DaVinci. The source of the family’s wealth was rooted in the banking worldwide banking system they had founded in the late fourteenth century. Under the leadership of Cosimo de’ Medici, the bank rapidly expanded and found itself overstretched by the time of his death. At the same time as the Medici were stretched to the limit the Pazzi and Salviaiti banking families attempted to replace them as rulers of Florence. On April 26, 1478, two members of the Medici family were assaulted at Mass in Florence. Despite the failure of the plot, the Medici were unable to reassert complete control. The Medici bank was characterized by its dangerously low cash reserves, usually around 10% of assets.

As the Pazzi Conspiracy and various wars reduced the competitiveness of the bank, it approached insolvency. As a result Lorenzo de’ Medici taxed the citizens of Florence in the name of military defense to a near tyrannical level. Finally, in 1494 the bank collapsed due to this corruption, faulty investments, and incompetent management. After the bank collapsed, millions were lost from the Florentine economy and it took years for a complete recovery. Since the company had also defrauded the account of Charles VIII of France that paid for dowries the crisis had worldwide implications. ??

Following Columbus’s discovery of the New World, Spain began the search for gold in the New World. For decades the rich resources of the Americas made Spain one of the wealthiest nations on earth and allowed it to create a great empire. By the second half of the sixteenth century, however, the Spanish had increased mining to unprecedented levels. Rather counter intuitively this influx of wealth nearly destroyed Spain. The high levels of freshly minted gold and silver in Europe drove down the value of money and lead to hyper-inflation across Europe.

Combined with the wars that Spain fought to protect its empire, the inflation damaged the economy beyond repair. Instead of reaping great wealth, Spain ended up defaulting on its debt several times. This economic turmoil pushed the Spanish Empire into decline and allowed the British to begin creating an empire of their own. 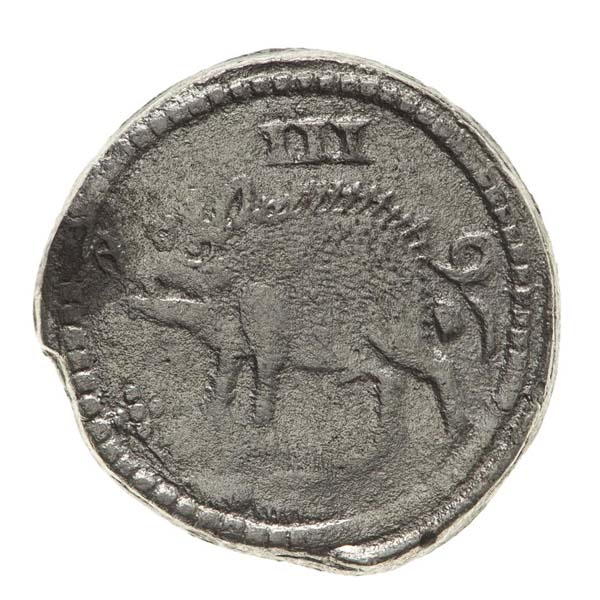 Several powerful trading companies drove the spread of the British Empire in the seventeenth and eighteenth centuries. Bermuda was colonized with the help of several of these companies. Once the colony was established the colonists were put to work making these companies money. The workers were paid in company credit instead of wages, similar to coal companies in the nineteenth century. When Daniel Tucker was appointed governor of Bermuda he abandoned the credit practiced and introduced his own coins minted from brass. 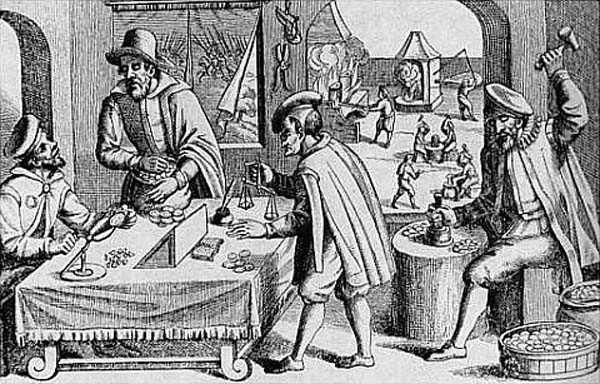 When countries rapidly increase their debt to finance wars the result is never good. In the seventeenth century there was no way to insure effective taxation so the states of the Holy Roman Empire began to mint money to raise revenue for the Thirty Years Wars. To do this the empire removed coinage from circulation, melted them down and mixed them with lower value metals. The name of the crisis refers to the scales used to weigh the money before it was melted down. These debased coins were then spent in foreign territories, to limit the economic damage that might occur to the empire.

Eventually, the debased coins returned to territories of the Holy Roman Empire in the form of duties and taxes. As the public became aware of the practice there were riots, soldiers refused to accept the debased coinage as pay, and seditious pamphlets were distributed. The money eventually became so worthless children played with the coins in the streets. The resulting rise in prices also crippled the economies of many states within the empire. 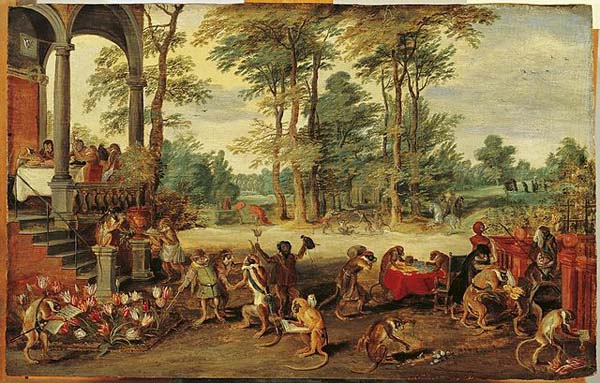 Perhaps the most bizarre economic crisis on this list, Tulipmania holds the distinction of being the first recorded economic bubble. When the tulip flower was introduced to the Netherlands in the early 1600s it became instantly popular. In the first true “consumer craze” Dutch citizens simply had to have the latest tulip. Since tulips only grow at certain times of the year, the Dutch set up a future’s market. When tulips were not available consumers could purchase the rights to tulip bulbs when they became available.

Soon speculators began playing the future’s market and drove the bulb prices to shocking levels. At the height of the bubble some bulbs sold for the equivalent of an average worker’s ten years salary. The bubble burst in 1637 and the value of tulip bulbs fell back to previous levels. Just like the stock market crash in 2008, investors saw their money erased. The bizarre flower driven financial collapse erased many fortunes and left many investors penniless. 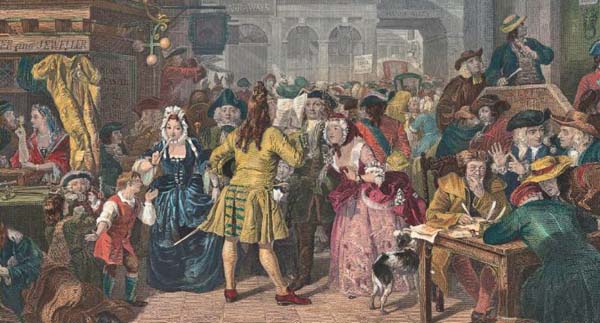 The South Seas Bubble shows what can happen when speculators ignore several important limitations on their schemes. In the early eighteenth century, the British economy was suffering from government overspending. As a result, British investors were intrigued by the stories of plentiful gold in the Americas. To tap these riches, the South Seas Company was formed and the British monarchy granted it exclusive trading rights to South America. Despite the fact that Spain owned South America, making the British edict completely useless, investors flocked to the company.

The company, despite its obvious limitations, attracted so many investors that nearly a year’s worth of Britain’s GDP was invested. The stock skyrocketed on the British exchange. The company even investigated investing in the British national debt. Confidence was so high the Chancellor of the Exchequer had an investment account worth several hundred thousand pounds with the company. At the end of 1720, the South Seas Company stock was worth roughly 37 million pounds. Of course Spain refused to allow British adventures to remove their gold and the stock crashed. The resulting shockwave crippled the English economy and left many investors completely penniless. An entire generation of wealth was erased from the British economy. 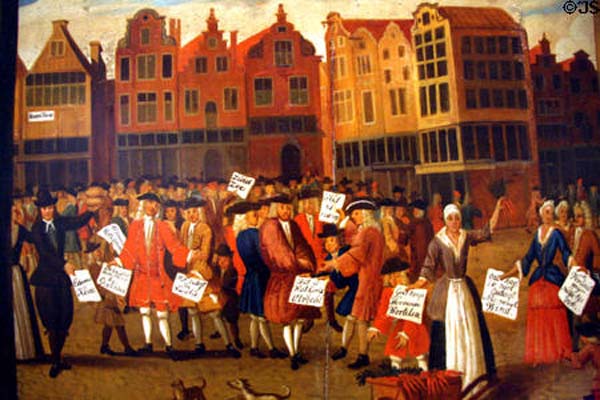 Britain was not the only country to catch the speculation bug in the first quarter of the eighteenth century. When Louis XIV died, the French economy was completely exhausted from financing the wars that the Sun King had waged across Europe. The treasurer didn’t even have enough gold to mint new coins. John Law, a French government economist, proposed creating a bank that would print paper money. The government circulated so much paper money that it was valued at five times the wealth of France.

To deal with the issue before it destroyed the French economy, Law informed the French citizenry that the new colony of Louisiana was filled with gold and an excellent investment opportunity. He hoped that the investment would allow government to obtain more actual wealth to solve the problem of the worthless notes. When the promised mountains of gold failed to appear from Louisiana, the bubble burst in 1720 and shares were devalued. What followed was a bank run when the value of Law’s currency was halved and devastating inflation that crippled the French economy. 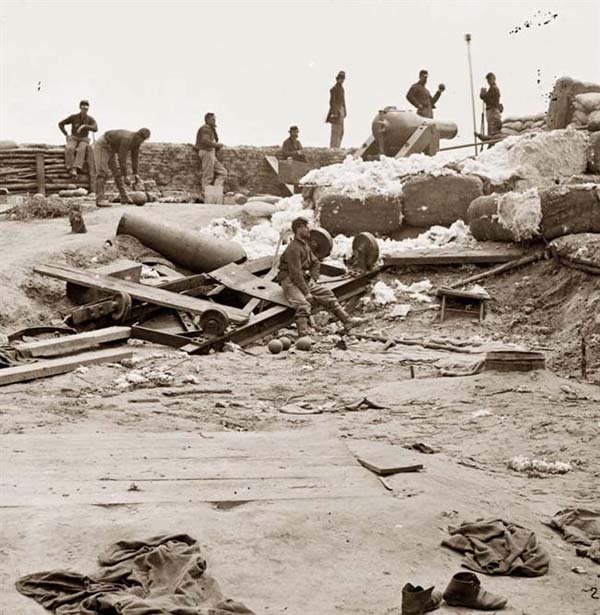 During the US Civil War, a major goal of the Confederate army was to secure diplomatic recognition from European nations. Since cotton was essential to the economies of England, France, and other nations, they cut off cotton exports to force recognition. The Union blockaded Confederate ports but was never able to efficiently limit Confederate blockade running until late in the war.

Combined with this Union blockade the decision to cut off cotton exports virtually extinguished Confederate trade revenues. The two factors lead to rampant inflation that made Confederate currency virtually worthless. When the Civil War ended, the economy of the South was in complete ruins. 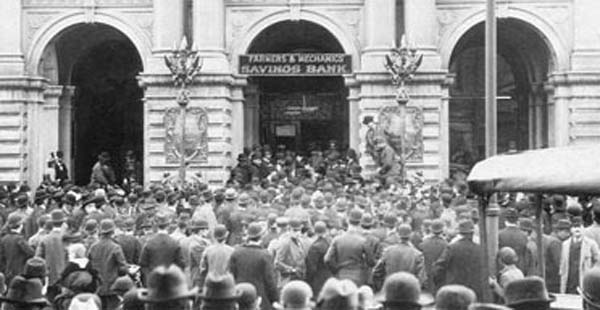 The Panic of 1893 was the worst economic crisis in America until the Great Depression. As railroads became the dominant mode of transportation in the United States, speculators invested heavily in the technology. Many railroads simply overextended themselves and could not cover their expenses with revenues. In 1893, the giant Philadelphia and Reading Railroad collapsed under its own weight and declared bankruptcy.

At the same time as the railroads began to feel the damage of their mistakes, the silver market was rocked. The 1880s witnessed the discovery of several silver mines and the resulting production drove the value of silver down. The US Government sought to deal with the crisis by buying silver in attempt to artificially increase its value. Once the government stopped purchasing silver the crisis reached its full height. The resulting depression lasted until 1900 and witnessed the collapse of 16,000 businesses and 17%-19% unemployment at its peak.