Recently, we featured a list that talked about some of the most beautiful natural landscapes on the planet. It was incredible, and this list has absolutely nothing to do with it. Instead, we’re going to explore natural places that belong more in a nightmare than any real-life location. Between surreal landscapes, terrifying natural phenomenon, and bottomless lakes with hidden surprises, here are 10 places that mother nature created out of pure spite. 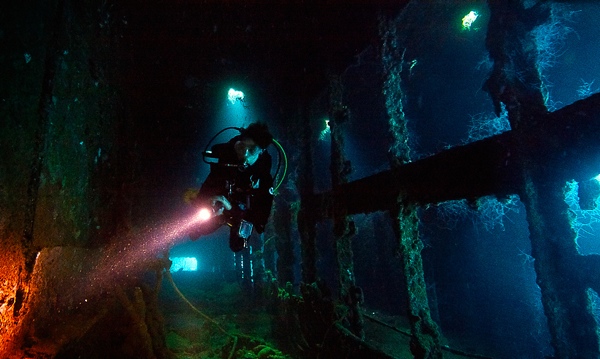 Truk Lagoon is located off the coast of Micronesia, and beneath the pristine tropical waters lies one of the largest ship graveyards in the world. In the midst of WWII, Japan chose Truk Lagoon as one of its headquarters for heading off the Allies in the South Pacific. It soon became their largest stronghold in the area, until February, 1944, when American troops launched an attack that sank more than 60 ships and 275 airplanes.

Now, the eerie waters hide hundreds of wrecks. The lagoon is ringed by a ridge of coral that protects it from the turbulence of the open ocean, so the majority of the wrecks are surprisingly intact, offering a ghostly view into the past for any diver who wants to brave the sharks. Unused bombs, boxes of supplies, and human skeletons still lay littered throughout the holds and on the decks of many of the ships.

9
The Door to Hell 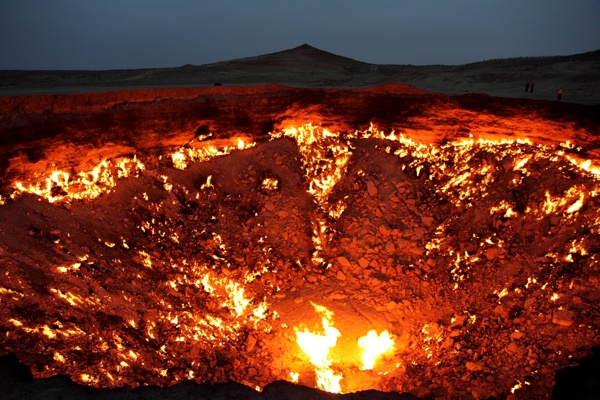 Derweze is a small village in northern Turkmenistan. Located in the middle of the desert and with a population of only 350, it doesn’t make for a popular tourist destination. That goes double once you realize that Derweze is the location of the Door To Hell—a 70 meter wide hole in the earth that has been burning for over 40 years.

In 1971, a team of geologists accidentally broke through the surface into a massive underground cavern, which proceeded to cave in and swallow the drilling rig. Worried that the cave was releasing dangerous gases, the geologists lit it on fire to burn off the gases. Sure enough, it caught fire—and then never went out. The crater rests atop an underground field of natural gas, and it has kept the fire burning for nearly half a century. 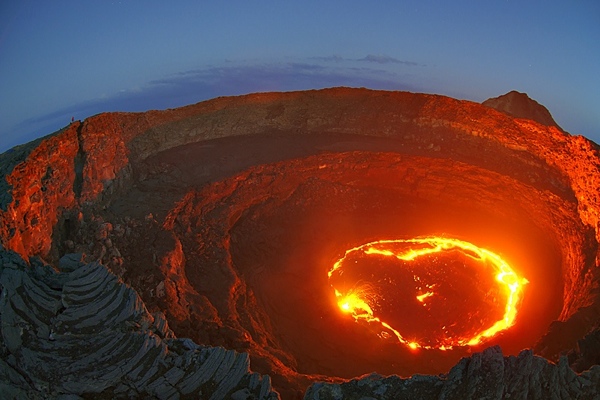 Imagine a world where the earth beneath your feet is constantly moving, chasms appear out of nowhere, and at any moment the ground might disappear completely. Welcome to the Afar Depression of eastern Africa, one of only two spots in the world where a mid-ocean ridge is visible on dry land. As the name suggests, a mid-ocean ridge is usually found in the ocean, and is the line where two tectonic plates meet. They’re also some of the most geologically active locations on the planet.

In a two month stretch between September and October in 2005, the Afar Depression experienced 165 earthquakes over 3.9 magnitude, with smaller ones occurring almost continuously. The area is home to one of the largest lava lakes in the world, the Erta Ale, and it’s believed that the Horn of Africa will eventually split away from the rest of the continent at this site. 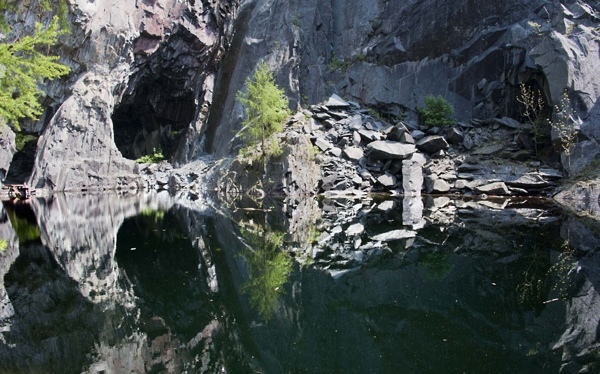 Right in the heart of the U.K. lies one of the most terrifying images mother nature has ever created. Hodge Close Quarry is an old slate quarry that has more recently been used as a diving spot, with a network of caves that can only be reached from the outside by underwater passages, and according to the website the diving site has seen its fair share of deaths over the years.

But in 2011 photographer Peter Bardsley noticed something startling: When the water is smooth, it forms a picture-perfect image of a monstrous leering skull. Half of the skull is created by the shape of the cliff side and the other half comes from the reflection in the water. Shrouded by mist and with a perpetual chill to the water (6 degrees Celsius on average), the quarry nevertheless attracts a few brave divers every year. 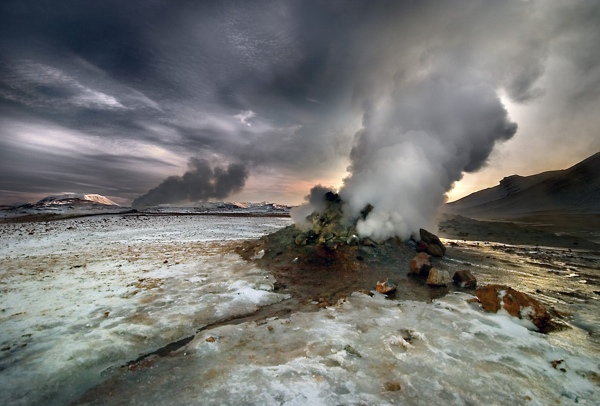 Namaskaro is a region in Iceland that’s located at the base of Mt. Namafjall—just one of numerous volcanoes in the area. In fact, the entire region is a hotspot of geothermal activity, and offers one of the most bleak and unsettling landscapes on the planet.

The ground is covered with solfaratas—boiling pools of mud that are anywhere from a meter to over a dozen meters wide. Peppered in between the solfaratas are spouts of sulfur-filled steam and volcanic gas that create a constant haze over the region.

The boiling, steaming earth, combined with the complete lack of vegetation, gives Namaskaro a definite unearthly feel which definitely fits its nickname, “Gateway to Valhalla.” 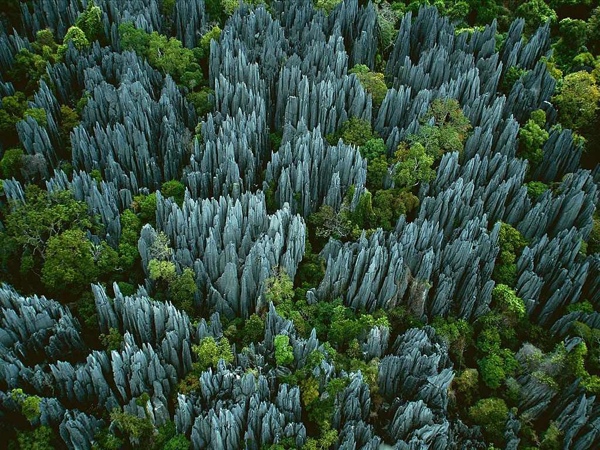 The Tsingy de Bemaraha National Park in Madagascar is one of the strangest places you’ll ever see. The entire park is composed of a forest of needle-like rock spires up to 120 meters high in some areas. The rock, formed by water eroding away the limestone, is razor sharp and provides a home to hundreds of species that aren’t found anywhere else on earth.

Visually the place is eerie enough, but it’s also very under-researched. In fact, few scientists ever travel deep into the forest, and only a handful have ever done it more than once.

A journalist for National Geographic describes how difficult it is to travel through the park: “We squeezed through passages, our pack straps catching on fingers of stone. We stemmed narrow ravines and nervously straddled fins that were like fences topped with broken class. The rock pierced our boots, leaving holes in the rubber. Usually we came over needle-sharp rises only to descend onto mats of thin soil covering yet more serrated rock. We’d carefully find our balance, then try to figure out what to do next.” 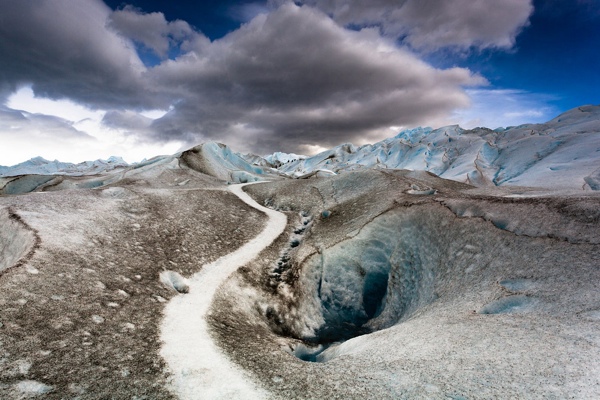 The Patagonian Ice Field is a sheet of ice in Southern Argentina and Chile that measures almost 17,000 square kilometers. It’s the third largest fresh water source on the planet, and feeds 48 separate glaciers. One of those glaciers is the Perito Moreno Glacier, a bleak wasteland of snow and ice shards that’s slowly advancing across Lake Argentino.

The Perito Moreno Glacier alone is 250 square kilometers, an isolated wilderness of towering ice peaks and deep ravines. And like all glaciers, Perito Moreno exists mostly underwater, with 170 meters of ice extending below the surface. At the leading edge, a 74 meter high wall of ice rises out of the water. 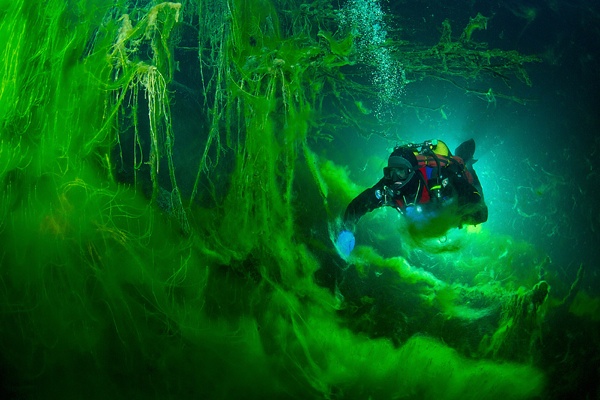 Blue Lake, located in Russia, is what’s known as a karst lake—a lake with no visible stream running to or away from it. That’s because Blue Lake is fed—and drained—by a series of underwater caverns and passages. High levels of hydrogen sulfide give the lake a bright, glowing blue coloring, but that only extends as far as the light reaches.

Because what’s so terrifying is that as far as anybody can tell so far, the lake is bottomless. Although estimates do put the depth at around 250 meters, the underwater stream that feeds the lake still hasn’t been discovered.

Due to the series of underwater caves—the deepest known system in the world—it’s difficult to tell what actually constitutes the floor of the lake, and researchers believe there’s an even larger cavern beneath the “floor” of the lake. 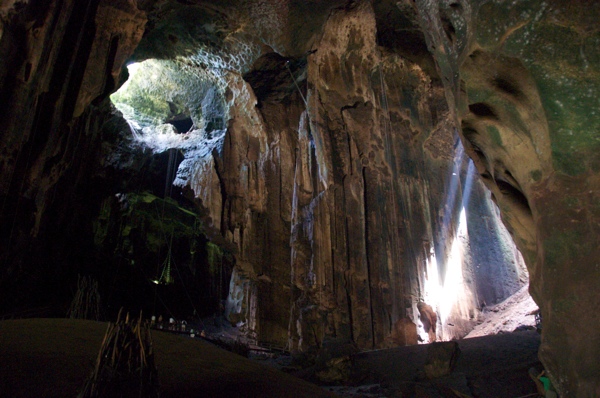 The Gomantong Caves are a series of caves in Malaysia that make a pleasant home for millions of bats and swiftlets, small birds whose nests have, in times past, been harvested to make birds nest soup.

What makes a pleasant home for bats, however, is sometimes better described as “hell on earth” for everybody else. Let’s go through this one thing at a time: It’s estimated that more than two million bats live in the Gomantong Caves. With that many bats in such a confined area, guano has nowhere to go but down, so the floor of the caves is covered by mountains of bat waste—meters thick.

But in order to get to the guano, you have to dive through another layer—a layer of cockroaches. Millions upon millions of Malaysian cockroaches live in the caves and feed on the bat guano. They carpet the floor and cover the walls. In the midst of the roaches are the occasional rat, white cave crab, and thousands of giant Scutigera centipedes. 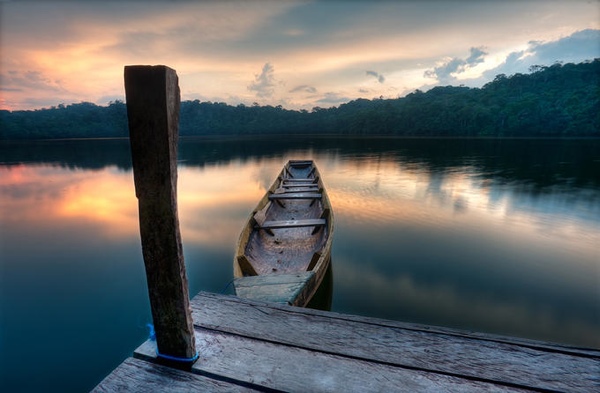 One of the most diverse regions in the world, the Madidi National Park covers most of the ground between the Andes Mountains and the Tuichi River in Bolivia. And everything is poisonous. In 1999, photographer Joel Sartore spent a month in the park attempting to capture a few photos of the wild pigs that live in the area.

The first night, Sartore watches a woman pull a fly larvae out of the flesh of her calf, then shrug it off like something that happens all the time. At the end of the first week he gets a flaming rash across his hands and face—from brushing against a moth. One of the guides recounts a time when they stumbled across a pack of wild pigs. They tried to climb into a tree, but the pigs pulled down one man and tore him apart.

Later in the journey, a man spends days in agony as parasitic worms eat through his stomach. Several people, including one guide’s nine month old baby, are infected with a parasitic fungus. Sartore gets a fly maggot in his own hand—botfly larvae, or “boros,” that dig a hole into flesh, then crawl out as a fly once they go through metamorphosis.

And a few weeks after he left the rainforest, Sartore was diagnosed with leishmaniasis, a flesh eating parasite that he contracted from a sand fly bite.