History is defined by people and their actions. The following historical figures have ultimately helped to change the course of history, influencing electricity, politics, religion, and scientific discoveries.

Yet, their lives or deaths may have taken rather bizarre turns. Although these are not the accomplishments for which these people are ultimately remembered, here are 10 strange facts about historical figures. 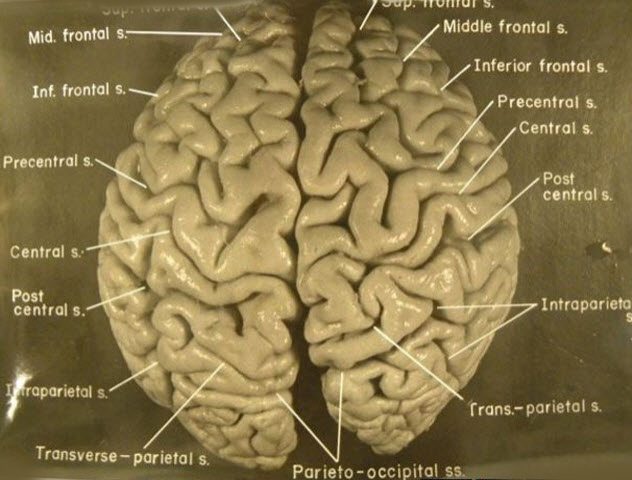 Albert Einstein, a theoretical physicist, took his last breath at 1:15 AM on April 18, 1955. Unfortunately, his final words were lost forever as the nurse at Princeton Hospital did not speak German. Later that day, Einstein’s cremation was held in Trenton, New Jersey. Sadly, his son, Hans Albert, discovered that his father’s body had not been intact prior to his cremation.

Dr. Thomas Harvey, the pathologist who performed the autopsy, investigated Einstein’s body to discover more than just his cause of death, which was a burst aorta. As he may have hoped to make a name for himself in medicine, Harvey chose to saw open Einstein’s cranium before removing his brain.

In 1978, Steven Levy, a budding reporter, met with Harvey and learned what had happened to the organ. After much convincing, Harvey pulled out Einstein’s brain, which was not only pickled but sliced into 240 cubes. The brain had remained in a box marked “Costa Cider” for 20 years.[1] 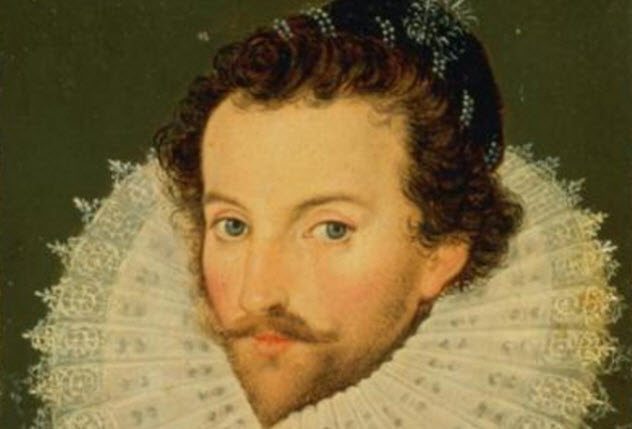 Sir Walter Raleigh was an English adventurer and writer and one of the most notable figures during the Elizabethan era. Despite being a favorite courtier of Queen Elizabeth I, who died in 1603, he was beheaded in 1618 for conspiring against King James I.

His decapitated head was embalmed and presented to his wife, Elizabeth, who was one of the queen’s ladies-in-waiting. As she could not bear to be apart from her husband, Lady Raleigh is believed to have kept his decapitated head in her red leather bag for 29 years.[2] His head was later returned to his tomb at St. Margaret’s Church. 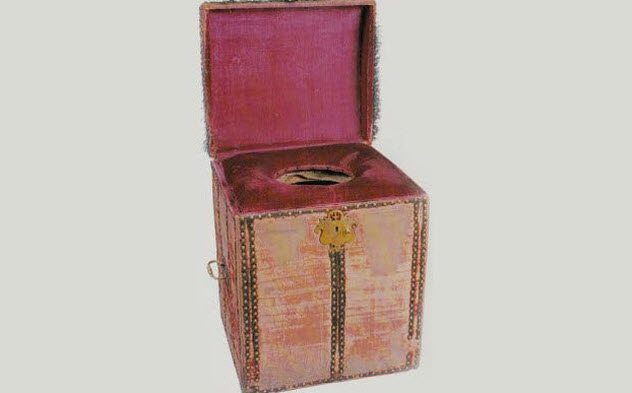 Each groom was knighted. The official title of the role was the “Groom of the King’s Close Stool.” These men were responsible for attending to the monarch’s toilet needs, but they also supplied water, a washbowl, and a towel for the king. They monitored King Henry VIII’s diet and mealtimes to predict his needs.

The Grooms of the Stool were the king’s most intimate courtiers and would often be privy to his closely guarded secrets as a result of the job. The position became more important throughout the decades because a Groom of the Stool was viewed as an influential man due to his close proximity to the king.

Therefore, many people attempted to speak to the groom to pass important matters on to the monarch. King Henry VIII also shared his personal thoughts with the Grooms of the Stool. Each was given lodgings where the king chose to reside and received his old clothing and furniture.[3] 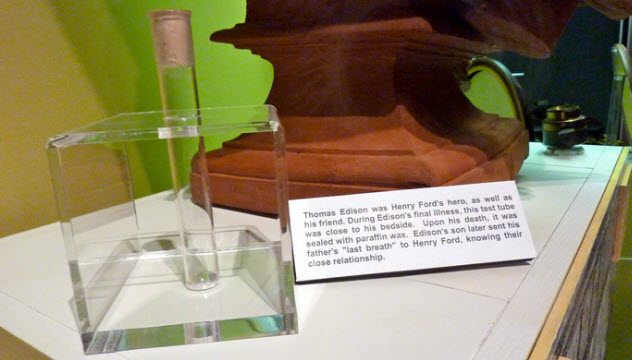 Thomas Edison has been deemed America’s greatest inventor by many as he was responsible for the motion picture camera, phonograph, and a long-lasting, electric light bulb, to name just a few. His innovations undoubtedly inspired Henry Ford, the founder of Ford Motor Company, who worked for Edison Illuminating Company in 1896.

Ford’s dream came true when he was able to meet Thomas Edison and explain his new automobile to the inventor, who was impressed by his idea. His words ultimately inspired Ford to create a prototype of the Model T. The two men also shared a friendship throughout Edison’s life.

Sadly, Edison died of complications from diabetes in 1931 at his home in West Orange, New Jersey. After sharing a great friendship with the inventor, Ford supposedly convinced Edison’s son, Charles, to hold a test tube to Edison’s mouth to catch his last breath.

Many believe that the eccentric Ford was trying to capture Thomas Edison’s soul as it escaped his body. However, it might be easier to believe the story that eight test tubes were located near Edison’s bed as he died and his son sent one to Henry Ford. Either way, the last breath is on display at The Henry Ford Museum in Detroit.[4] 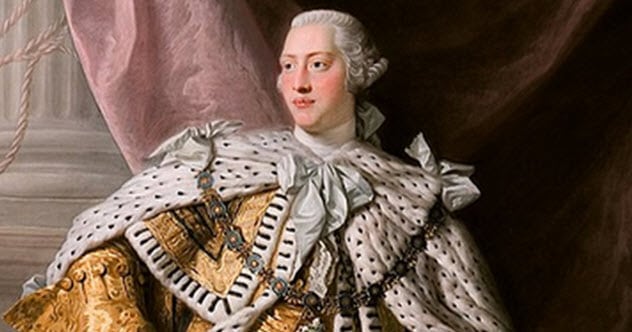 In addition to his so-called erratic behavior, King George III will always be known to the British as the king who lost America. It was known that the king was prone to repeating himself, and he would often talk until foam ran out of his mouth. Yet, one of the strangest facts about King George III is that he supposedly had blue urine.[5]

He was posthumously diagnosed with acute intermittent porphyria, which is a genetic blood disorder. The condition would have been the cause of his mania and strange-colored urine. 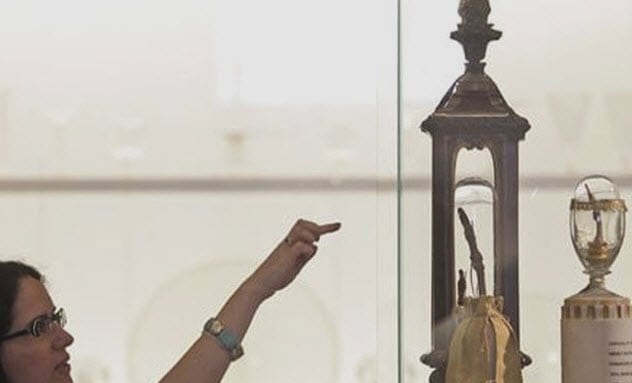 Galileo Galilei was an Italian astronomer who famously heard of the construction of the telescope and developed a superior version without seeing the initial example. As a result, he made many astronomical discoveries throughout his lifetime, including the mountains and valleys on the Moon’s surface and the phases of the planet Venus.

The notable inventor died at age 77 on January 8, 1642. Weirdly, before he was buried, three of his fingers and a tooth were removed from his body by his admirers. The body parts are now on display at the Museo Galileo in Florence, Italy.[6] 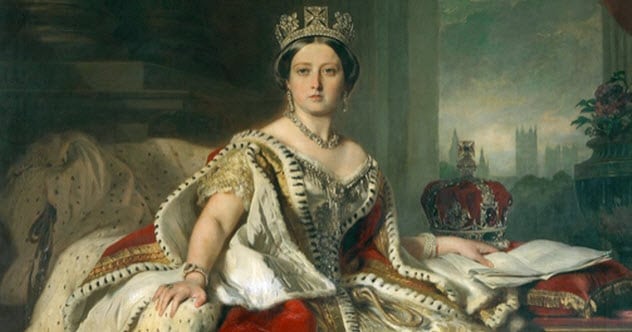 Queen Victoria had the second-longest reign of any British monarch—from June 20, 1837, until her death on January 22, 1901. Following her death, Queen Victoria’s underwear was weirdly divided between her courtiers as mementos along with many more of her garments.[7]

The royal undergarments can be easily identified by her royal cypher, which was stitched onto every piece. In 2015, a pair of her royal cotton knickers were sold for £12,000 to a private English collector, along with stockings, nightdresses, and hats. Each piece bears the stamp “VR,” which is short for “Victoria Regina.” 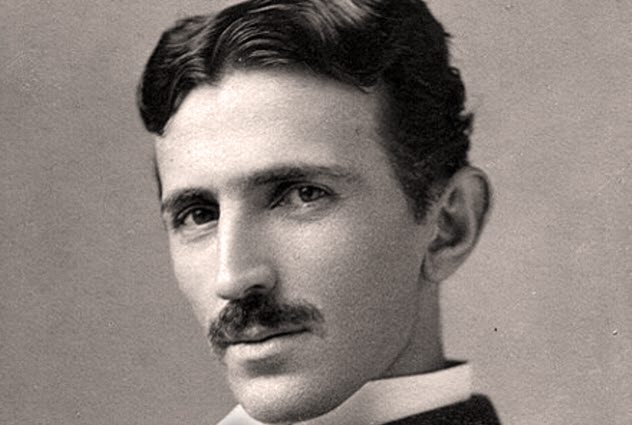 Nikola Tesla was a Serbian-American inventor who is famous for his design contributions to the modern alternating current (AC) electrical supply system, which is widely used to this day. Toward the end of his life, the notable inventor developed a fascination with pigeons. He stated that he loved a white female pigeon like one would love a human.

He also claimed that his beloved white pigeon visited him one night through an open hotel window. It was Tesla’s belief that the bird had come to inform him that she was dying. He claimed that he saw two powerful beams of light in the pigeon’s eyes and stated that it was “a light more intense than I had ever produced by the most powerful lamps in my laboratory.”

The white pigeon died in his arms, and Tesla knew in that moment that his life’s work had come to an end.[8]

2 President Abraham Lincoln And The Wrestling Hall Of Fame 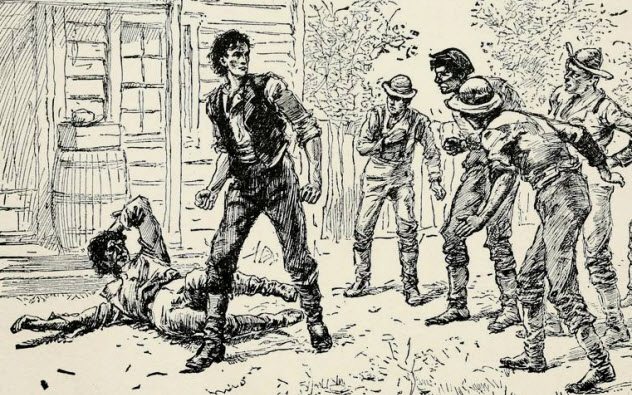 Abraham Lincoln is arguably one of the greatest American presidents, so it might be surprising to learn that he has been honored in the National Wrestling Hall of Fame. As he had rather long limbs, Lincoln was thought to be a good wrestler as a young man. In fact, he was only defeated once in 300 matches.

In true wrestling style, he was known for talking a little smack in the ring. In fact, it was stated in his biography that Honest Abe actually challenged a crowd after winning a match: “I’m the big buck of this lick. If any of you want to try it, come on and whet your horns.”

Unsurprisingly, no one stood up to wrestle the future 16th president of the United States. Due to his wrestling talent, he was given the honor of an “Outstanding American” at the National Wrestling Hall of Fame.[9]

1 President William McKinley And The Handkerchief 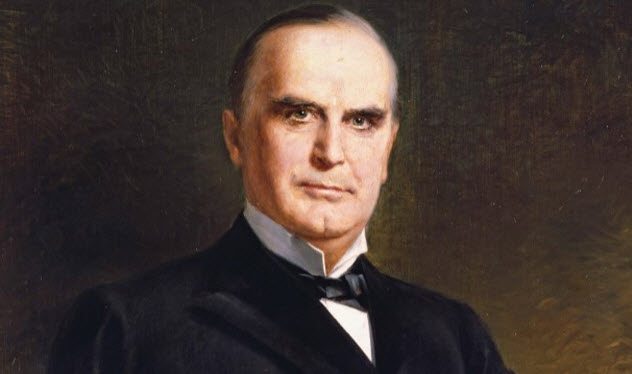 William McKinley was the 25th president of the United States and led his nation to victory during the Spanish-American War. He was also the last president to have served in the US Civil War.

McKinley was married to Ida Saxton, whom he loved deeply through more than two decades of her illness.[10] His wife was never far from his side and even sat beside him at state dinners, despite it being against protocol. Yet McKinley was cautious about displaying her ill health to the public, so he would place a handkerchief over Ida’s face if she experienced an epileptic seizure.