In recent years, there have been a growing number of cases where a group of animals will die en-masse. There are many different explanations for all of these cases, such as illness, pollution, global warming, and the apocalypse. Many of these cases have been solved, and usually with a simple explanation, such as pollution. Others, however, remain a mystery, and with pollution or illness sometimes not being an option, it leaves us wondering what exactly is happening in nature. 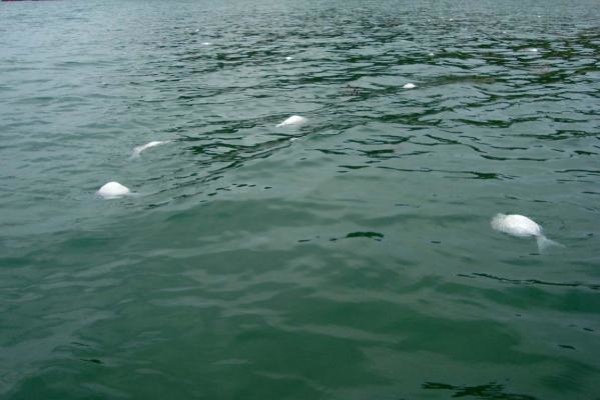 In January 2011, hundreds of dead snapper fish washed up on the beaches of the Coromandel Peninsula in New Zealand. Fishermen that were out at sea described the water as carpeted with dead fish. What makes this example especially strange is that all of the fish were missing their eyes. While the Department of Conservation said the fish had starved, one witness said “That’s just completely untrue. This was something deliberate”. While most people wouldn’t be so quick to jump to some sort of fish genocide conclusion, the truth remains to be seen. 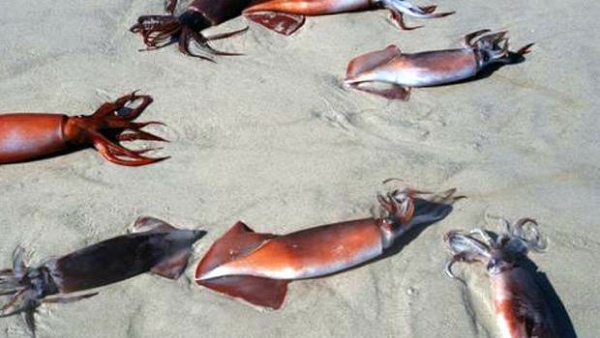 In January 2005, thousands of Jumbo squid beached beached themselves on California shores. Very little is known about these squid, as they live at depths of up to 2,300 feet (700m), making it much harder for scientists to ascertain why they would suddenly engage in a mass suicide. Toxic poisoning is one theory, although if the water had been contaminated, more than squid alone should have been affected, and if it was something they ate, it is unlikely that so many would have been involved. A similar event occurred in San Diego in 2002, with toxins being the leading (but unconfirmed) suspect in that case too. 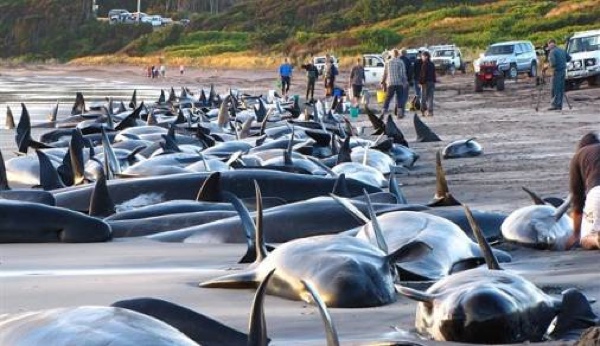 Hundreds of pilot whales died in Tasmanian waters in 2009. Over 400 died at sea with no explanation, and almost 200 beached themselves on King Island, along with a number of dolphins. Rescuers hurried to the animals’ aid, but around 140 of the whales were dead by the time they arrived. The rest of the whales were saved, as were 7 of the dolphins. A few months prior to this incident, 150 pilot whales died after beaching themselves on the west coast of Tasmania, and later, 48 sperm whales, near Perkins Island. Disturbance in echolocation is the prevailing theory for why this occurs, but, again, nothing has been confirmed. 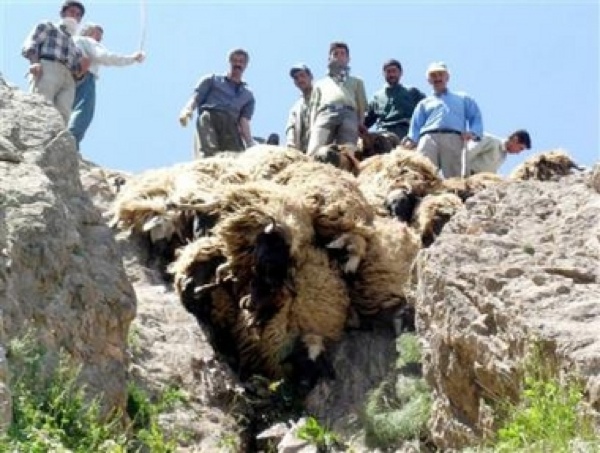 In 2005, a number of Turkish shepherds presumably lost their jobs, as the 1,500 sheep they were looking after jumped off a cliff. It all started when one sheep went over the edge, and as the old saying goes, was followed by the rest of them. The first 400 died as a result of the 50 foot (15m) fall, and the other 1,100 survived as they were lovingly cushioned by the bodies of their friends. This incident had an enormous impact on the local village, as many families depended on the sheep for their livelihood. 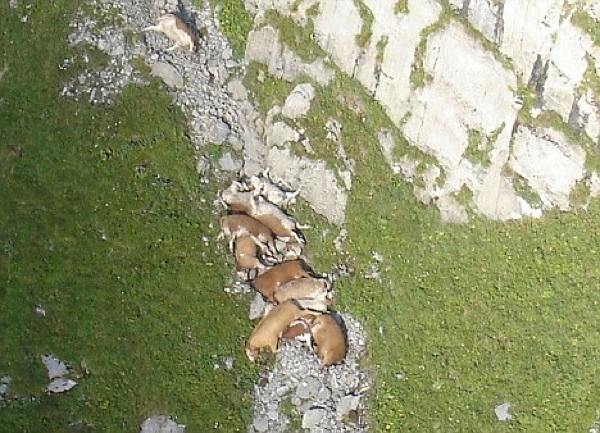 Sheep all running off a cliff together is one thing; they were all doing it at the same time. The cows and bulls in Lauterbrunnen, Switzerland are a different story though. Over the course of 3 days, 28 cows and bulls died after plunging off a much higher cliff than the sheep. The animals all fell off the same spot, which would be normal had they all gone together. But the fact that the incident was spread out over 3 days makes the whole thing more mysterious. 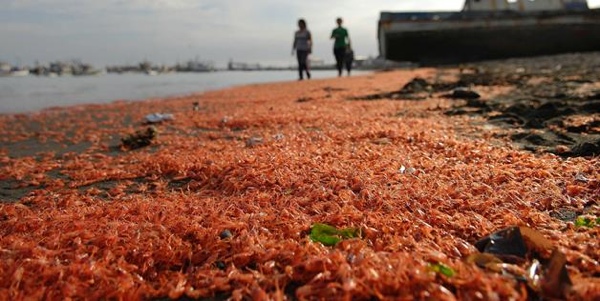 Just last month, residents of the town of Coronel, Chile, woke up to find that their local beach was now red. The cause: Millions of dead shrimp. Local fisherman have placed the blame on 2 coal-fired power stations located there, which they say has caused the temperature of the water to increase too much for the shrimp to bear. As this example is so recent, it will be a while before any definite explanation is given, if ever. 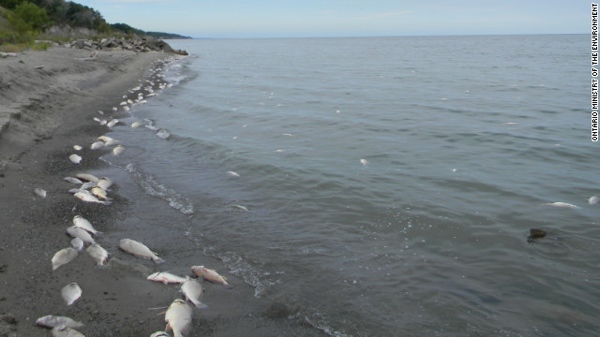 Last year, the aptly named Lake Erie in Ontario saw tens of thousands of dead fish, and well as seagulls, wash up on its shores. First reports said there was no indication of any pollution in the lake. One of the prevailing theories as to what caused so many fish to die is what is known as inversion, which is a natural phenomenon in which colder, less oxygenated water rises to the surface, and suffocates the fish. But researchers found no evidence of this, nor does this theory account for the dead seagulls. 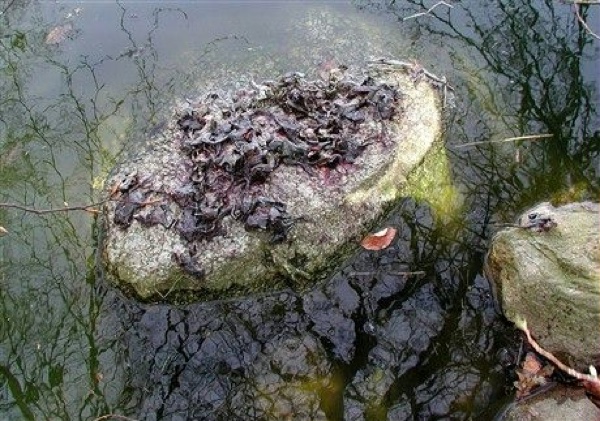 In 2005, thousands of toads in Northern Germany and Denmark were mysteriously exploding. One minute, they could just be sitting there, and the next, they would explode with enough pressure to launch their insides over 3 feet (1m) away. Proposed explanations include an unknown virus or fungus that causes their bodies to bloat. Another theory is that the toads are having their livers picked out by crows, and then puffing themselves up, which results in the explosion. Worse than the actual exploding (yes, it gets worse) is that the toads don’t immediately die, and can be seen struggling for several minutes. 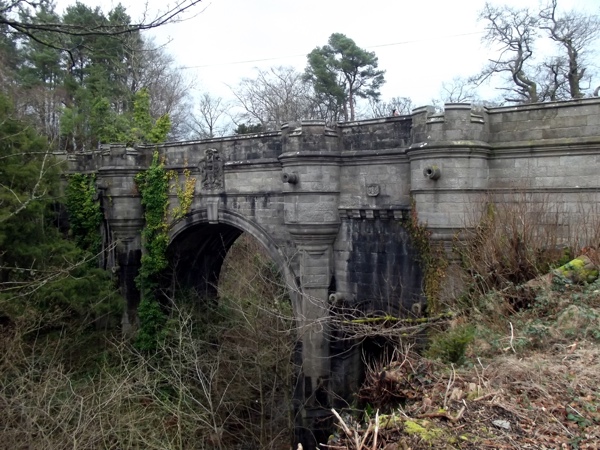 Overtoun Bridge in Milton, Scotland, has infamously become known as the dog suicide bridge, and with good reason. As early as the 1950s, dogs have been leaping to their deaths off this 50 foot (15m) bridge. At least 50 dogs have done so since the first recorded incident, including 5 dogs within 6 months in 2005. In Celtic mythology, the bridge is said to be the place where heaven meets earth, known as The Thin. Some people believe this supernatural presence to be the cause. Others believe the dogs smell the mink that are prevalent in the area, and that they are jumping off in search of them. However, this theory fails to take into account that dogs aren’t stupid, and this would happen all over the world if it were the case. 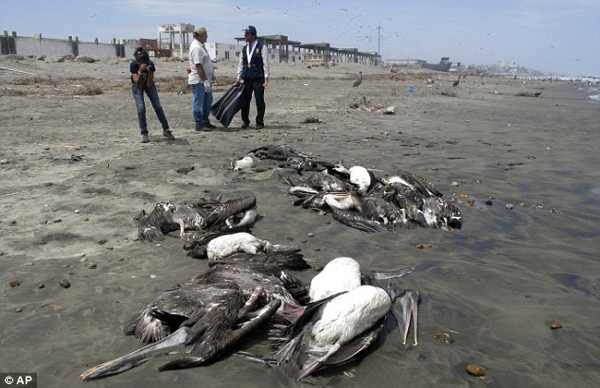 Birds have been dropping dead worldwide in recent years, and this is a lot worse than finding your pet canary at the bottom of its cage. In Kentucky, hundreds of sterlings and robins were found on one woman’s property. In Chile, thousands of flamingos, 1,200 penguins and 60 pelicans died over the course of 2 months. Mass bird deaths are happening with alarming frequency in recent years, but one place in particular stands our more than any other: Jatinga, India. Every year in this small village, birds will fly themselves into the ground. There are many mysteries surrounding this case: Why do they do this at all? Why does it affect different types of birds? Why do the birds only do this along a small stretch of the road? Why does it only happen in September? And why do the birds do this after sunset, when they are usually only active in daylight? Many people visit this spot every year to see the phenomenon occur for themselves.