Earth has suffered five big extinctions and innumerable little ones. A potential sixth mass extinction, the only one created by the planet’s own inhabitants, looms. So in the spirit of collective mass improvement, now’s the perfect time to look back at scenes of chaos and turnover of life that we hope to avoid in the future.

From the hectic dawn of the dinosaurs to the numerous disasters that darkened skies, acidified the seas, and turned our blue planet into a hellscape, these awe-inspiring scenes of destruction and rebirth shaped the Earth. 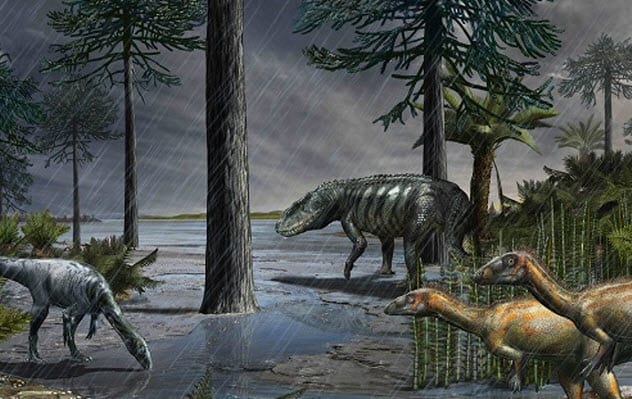 This one occurred about 232 million years ago during the Carnian Pluvial Episode when deep-sea volcanoes (the Wrangellia basalts in British Columbia today) forced climate change and a turnover of ancient life.[1]

This plunged the Earth into a series of wet and dry episodes. Most notably, four successive pulses of warming and cooling in just a million years led to multiple extinction scenarios which devastated the variety of plant and animal life.

Afterward, it took dinosaurs a surprisingly short span of just two million years to claim the globe and its many now-vacant niches. 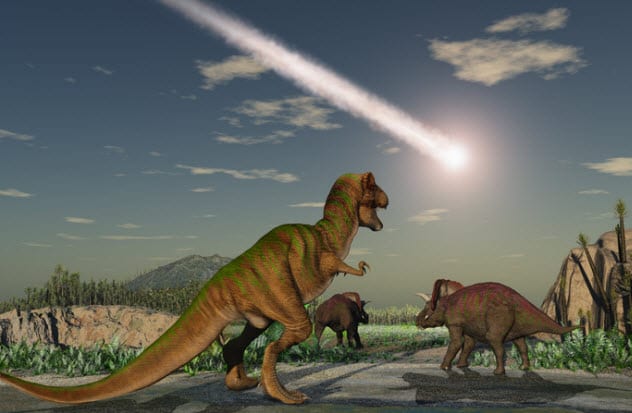 The 10-kilometer-wide (6 mi) asteroid that took away our dinosaurs 66 million years ago was an exceptionally lucky strike which might not have killed the dinos had it struck anywhere else.

In fact, just 13 percent of the Earth’s surface harbored the necessary materials to spur such a mass extinction. The asteroid just happened to slam into a patch of Earth full of fossil fuels, abundant in hydrocarbons and sulfur. The incredible temperatures generated by the collision ignited these rich veins of fuel.[2]

The resultant hellfires released vast amounts of soot which blocked out the Sun and decreased surface temperature as much as 10 degrees Celsius (18 °F). The escaping sulfur fell back down as acid rain.

Researchers modeled other impact sites. They found that the only other places with catastrophic fossil fuel concentrations included North America’s East Coast, the Middle East, and Siberia. 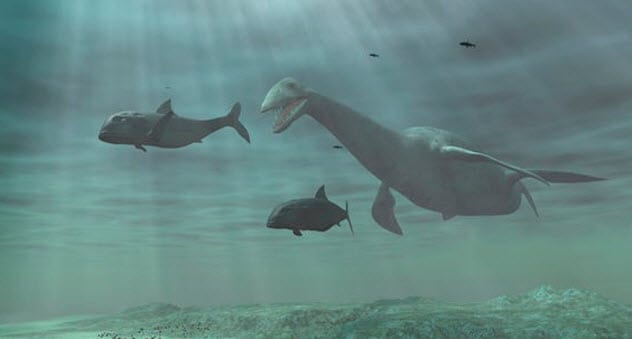 About 66 million years ago, an asteroid smashed into the Yucatan Peninsula and relieved the Earth of dinosaurs. It also killed the giant marine reptiles and caused an immediate extinction of many microscopic ocean creatures like plankton which feed other animals.

But deep-ocean creatures survived, fed by some mysterious food source. Researchers thank algae and some bacteria, photosynthesizing organisms that withstood the extinction and rained down on the ocean deep like a slow trickle of food for bigger creatures.

7 The Neanderthals Are Pushed Out 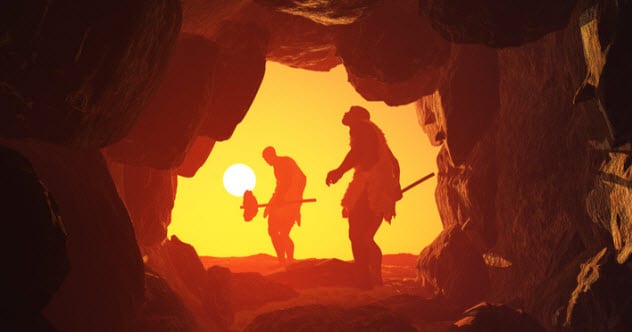 Neanderthals were like us: They buried their dead, crafted tools, controlled fire, talked, cared for the needy, and created art. So species inferiority may not have led to their demise. A new model says that we didn’t kill Neanderthals in bloody ancient warfare. Instead, their population simply fizzled out.

Their territory extended only from Europe to Central Asia. As other types of early humans (with more extensive habitats) poured in, resources weren’t adequate.

But the situation could have just as easily been reversed. Had we been living in the same region and subject to similar emigration from Neanderthal communities, we could have been the ones relegated to obsolescence.[4] 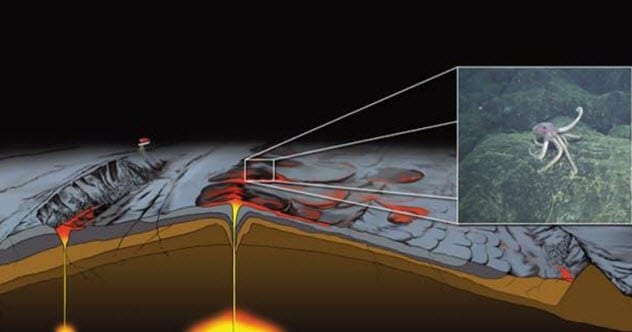 Earth’s crust is riddled with tens of thousands of miles of cracks, or mid-ocean ridges, where lava bubbles up between tectonic plates.

When the dino-killing asteroid hit, it actually rung Earth, sending seismic shocks through the planet in the form of magnitude-11 earthquakes. As the jolt reached deep down, it shook the planet like a can of soda and irritated the mid-ocean ridges, which squirted even more molten matter.

Two massive magma mounds, or “bumps,” in the Pacific and Indian Oceans were located by scientists thanks to the increased gravitational pull of the bumps. They’re composed of 96,000–1,000,000 cubic kilometers (23,000–240,000 mi3) of magma, which formed within a million years of the impact.[5]

The eruptions are on par with natural history’s all-time greats, and the increased volcanic activity continued for up to hundreds of thousands of years after the impact.

5 A Cluster Of Extinctions Fuels The Great Dying 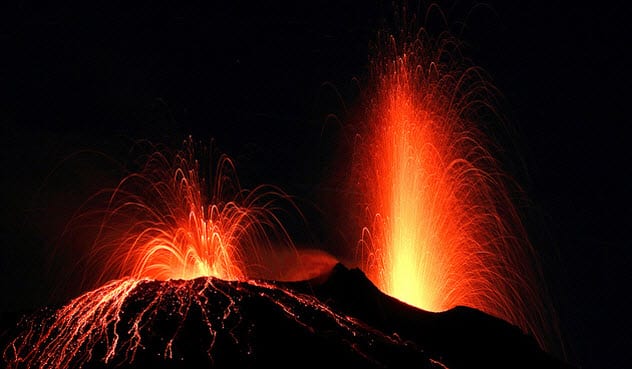 The End-Permian Extinction 252 million years ago was the worst of Earth’s five mass extinctions. It wiped out 70–75 percent of terrestrial species and up to 95 percent of sea life (though some say it’s closer to 80 percent). This extinction event is therefore known as the Great Dying.

But newer research suggests that it’s more like the Great Dyings. The extinction was caused by a two-pronged geological attack. First, volcanoes smothered the globe and the oceans acidified. Then a wave of anoxia drained the seas of oxygen.

After this main event, which saw the Siberian Traps release enough lava to cover an area larger than Alaska, two further mini-extinctions followed.

Volcanoes are again to blame. Carbon isotopes reveal that two major events occurred half a million years and 1.5 million years after the Great Dying, a spate of destruction from which it took 10 million years to recover.[6] 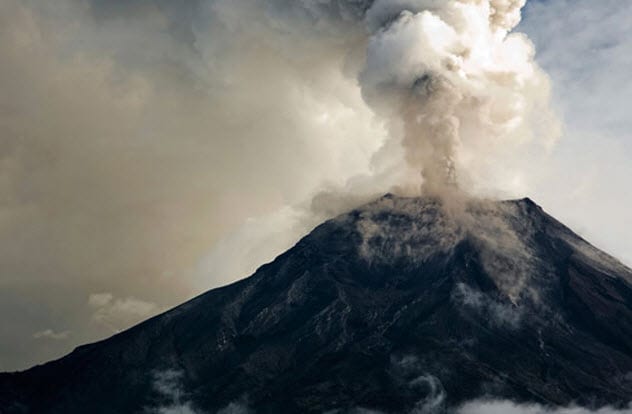 Mass volcanism is always bad, but location can be more significant than the duration or magnitude. During the previously mentioned Great Dying, subsurface eruptions caused far more chaos. When the Siberian Traps erupted, not all the lava oozed out. Some spread out over 1.6 million kilometers (1 million mi) beneath the Earth’s crust.

It sounds like a lucky break because underground is where lava belongs. But when it pooled at the subsurface, it scorched carbon-rich sediments and sent plumes of greenhouse gas into the atmosphere.

The result was ocean acidification, a rise in temperature, and an apocalyptic haze that decimated life. All in all, enough lava was released to cover a United States–size patch in up to 1 kilometer (0.6 mi) deep of lava.[7]

3 The Dinosaurs Faded Out Long Before The Asteroid 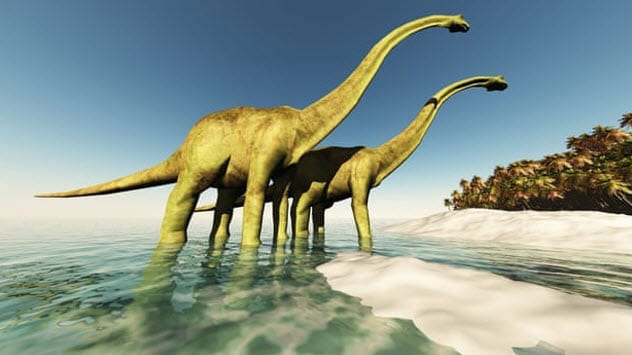 Factors like climate change and continental breakup started whittling away at the big-money dinosaurs: theropods (T. rex and such), ornithischians (Stegosaurus family), and sauropods (the Brontosaurus group). Conversely, the horned and duck-billed dinosaurs began to establish a stronger foothold, possibly due to the rise of a new food group, flowering plants.

Considering these trends, some researchers believe that the dinosaurs might have bowed out even without a catastrophic cosmic intervention.[8]

2 Space Wants To Kill Us 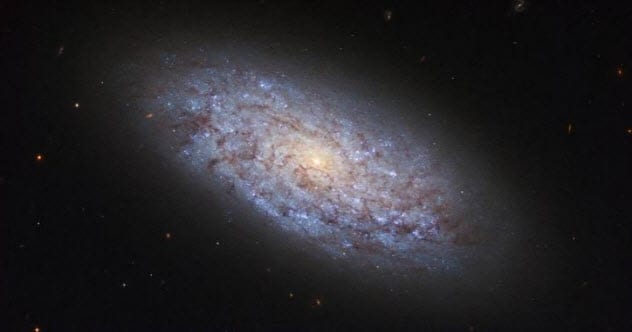 Extinctions may have a secret cosmic conspirator: dark matter.

The Earth and our solar system smash through the galaxy at more than 800,000 kilometers per hour (500,000 mph). Every 30 million years or so, they pass through the galactic disc in episodes that apparently line up with past extinctions.

Dark matter generally hangs in halos around Milky Way–like galaxies. But it also accumulates in the central midplane of the galactic disk. So when the solar system flies through this region, dark matter gravitationally perturbs space rocks and sends a few tumbling toward Earth.[9]

As Earth moves through these invisible clumps, it accumulates dark matter at its core. The particles cause each other to explode, releasing energies up to a thousand times hotter than normal core temperatures. This sends material bubbling to the surface to incite volcanism, magnetic field reversals, and sea level changes. 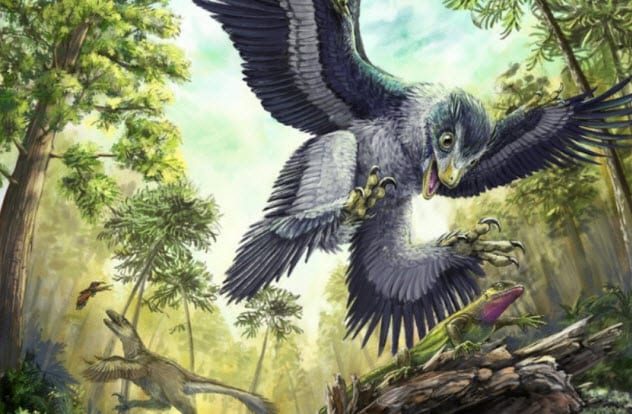 About 66 million years ago, a big asteroid slammed into Earth and killed off most of the dinosaurs. However, the birdlike maniraptorans endured.

Birdlike dinos came in two main flavors—toothed and not toothed. They consumed varied diets, but the ones without teeth, with their short and robust beaks, also ate seeds. This is why they survived the end-Cretaceous extinction while their toothy brethren did not.[10]

In spite of acid rain, darkened skies, landscape-consuming fires, and the eradication of most food sources, maniraptorans kept their bellies full. How? They poked through the ground for seeds deposited by these awesome new things called flowers that proliferated during the Cretaceous.

Ivan Farkas writes about cool stuff for the Internet. You can contact him at [email protected].