Love her or loathe her, there’s no doubting Margaret Thatcher was one of the most iconic politicians of our times. When she left office in 1990, the Britain her successor inherited was almost completely different from the one she was first elected leader of—for better or for worse. In honor of her passing, here are the 10 most iconic moments of her premiership: 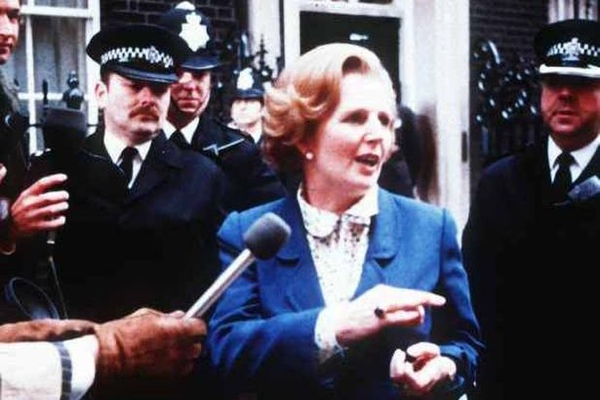 When Thatcher came to power, Britain was the ‘sick man’ of Europe. Her term in office would be characterized by a steely determination to drag the UK back onto the world stage—deregulating finance, palling up with Ronald Reagan and involving herself in the endgame of the Cold War. But it’s easy to forget her election alone was a record-breaking achievement: for the first time in ever, a woman had been elected to lead a major Western state. For the chauvinistic culture of the 1970’s it was a kick in the face. By simply being the first woman to enter Downing Street, Thatcher paved the way for Australia’s Julia Gillard, Germany’s Angela Merkel and the inevitable 2016 Hillary campaign.

9
Taking on the IRA 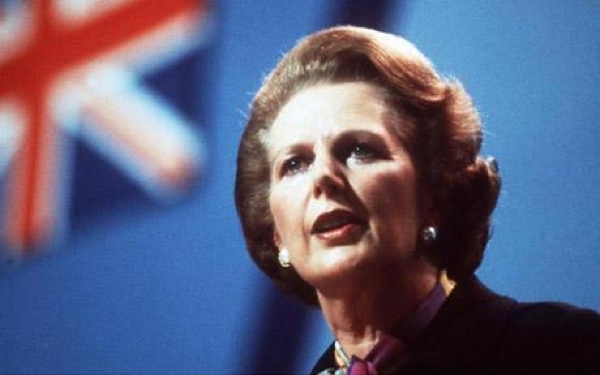 While it would be Tony Blair who brokered the first lasting peace deal in Ireland, Thatcher had her own methods for dealing with the ‘terrorists’—no compromise. Famously, this led to prisoner Bobby Sands’ hunger strike of 1981, and the violent backlash that followed his death. With the sole exception of her showdown with the miners, the issue of the IRA remains the most divisive legacy of the Thatcher government. Some admired her determination to never give in to terrorists; others claimed a more-pragmatic approach could have saved scores of lives and possibly even ended the Troubles. In 2011, released files showed the party gave a lot more consideration to the issue than it first appeared. But, for those located near the border, this may yet prove Thatcher’s most-infamous legacy. 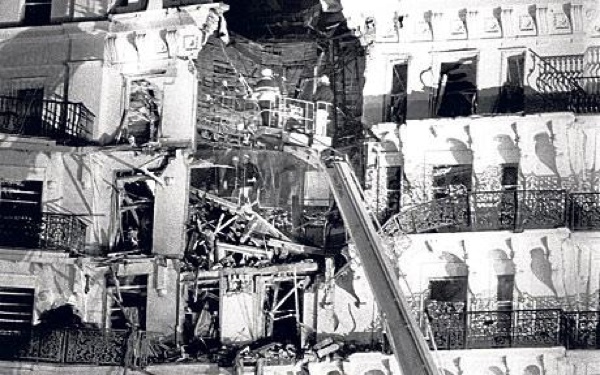 Three years after Sands died in prison, the IRA hit back by detonating a bomb in the Brighton Hotel hosting the Conservative Party conference. Luckily, Thatcher was on the other side of the room working on her speech when it detonated, escaping unscathed. Others were not so fortunate. In all, five people were killed, including a serving conservative MP. The aftermath of the explosion unexpectedly became one of the greatest triumphs of her political career: where you or I would have spent the next five years hiding beneath our beds and crying, the Iron Lady declared the conference would go ahead—making a speech now widely regarded as one of her best. The IRA, meanwhile, released this chilling statement: 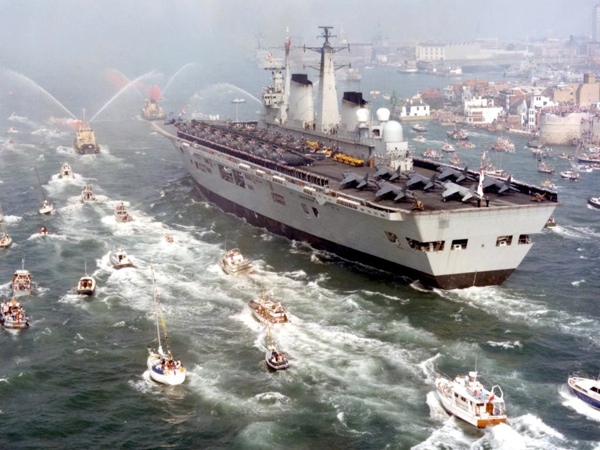 Toward the end of her first term, the then-unpopular Thatcher was forced to make a snap decision when shock reports came in that Argentina had occupied the Falklands. Unlike the grouching and vague-resentment of today’s sovereignty debate, this was the real deal. In the subsequent 74-day conflict, nearly a thousand people died and many more were injured—while Thatcher’s ratings received a massive boost from a public glad to see the government asserting itself. Today, the consensus on the Falklands War is more mixed; with many seeing it as an unfortunate but necessary evil. Along with strikes and protests, it remains one of the most-troubled moments of the era.

OK, so she wasn’t PM at the time, but it would be impossible to write a list of ‘iconic Thatcher moments’ and not mention milk. If you’re not that interested in your UK history, you probably have no idea what the heck I’m talking about—but for a generation at school in the mid-seventies it became her defining moment. Basically, in the decades immediately following WWII, a big health initiative saw free milk become a staple at schools across the country. All that changed during the monetary insanity that was the 70’s. Faced with a country seemingly on the brink of implosion, the fast-changing governments of the era tried to scrape together money wherever they could. As Education Secretary in 1970, Margret Thatcher had the misfortune to sign into law a bill scrapping free milk. From that moment until today, cries of ‘Milk Snatcher!’ would follow her at nearly every-damn public appearance. 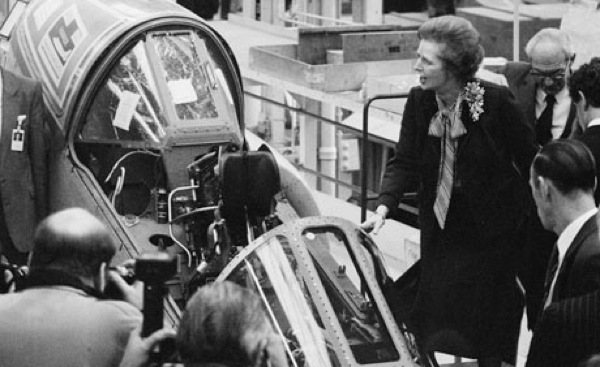 Milk, the Troubles and the Falklands War may have felt big at the time, but no other Thatcher policy had as much impact as privatization. Along with Reagan, Thatcher championed the free market and all that other stuff Gordon Gecko would later sum up as “greed is good.” But, unlike Reagan’s Republican Party, the UK conservatives were coming from a country with a strong recent tradition of near-socialism. So deregulation meant more than just loosening restrictions—it meant a wholesale restructuring of society from the bottom up. Railways were broken up and sold, national industries shut down and private ones erected in their place. Lots of people got rich; the public got a dose of cash and British society changed forever.

OK, so it might not have the far-reaching implications of anything else on this list; but one of the very best stories about Thatcher comes from her 1990 conference speech. To quickly give you some context: if you’ve somehow never heard of Monty Python, they were a British comedy troupe who famously did a sketch about a dead parrot. When a rival political party changed its logo to a bird, the usually humorless Thatcher did a barnstorming joke (above) comparing it and the party leadership to Python’s parrot. Nothing ‘iconic’ there, maybe, but the real moment came backstage. When told to throw the ‘dead parrot’ line into her speech, Thatcher famously pondered it for a long time, before asking her advisor: “This Monty Python. Is he one of us?” In true deadpan British style, the advisor simply replied: “Yes, Prime Minister.” 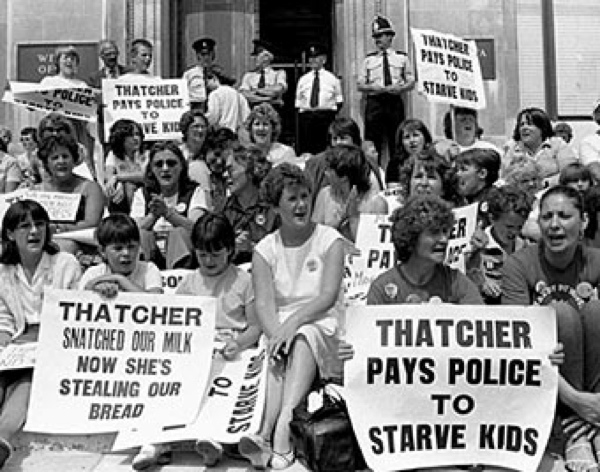 If anything’s bound to trigger a catfight in the comments, it’s this entry. For right winger’s, Thatcher’s taking on the unions and winning was nothing short of the most dazzling victory of the decade. For left winger’s, it symbolized the brutal underbelly of conservatism—allowing a whole class to suffer for the survival of the others. While I’m going to refrain from coming down on either side here, I will say it’s probably one of the most important moments in UK history.

Basically, The National Union of Mine Workers wasn’t ready to be side-lined. As we saw with the IRA above, Thatcher would NEVER be ready to compromise. What followed was a protracted strike that turned into a long and bitter showdown; involving police brutality, picket lines, dealings with the USSR and the shutting down of Britain’s manufacturing base. For all the anger and determination of the miners, Thatcher eventually triumphed—ending nearly 30 years of Union domination. Whether she took it too far or just far enough is for our readers to say, but there’s no denying her actions affected millions, for better and for worse. 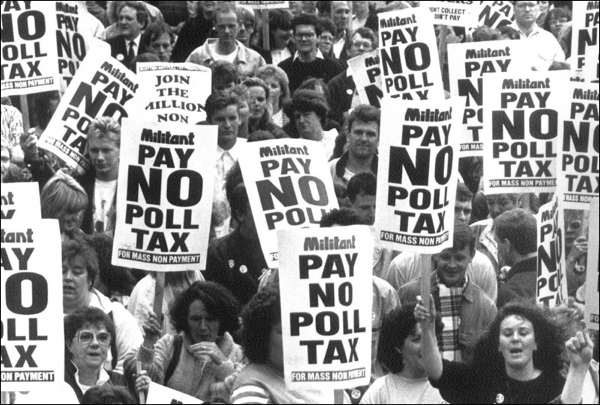 The Poll Tax was without doubt Thatcher’s biggest mistake in office. While the ins and outs are a bit too complicated to sum up in one article, let alone a single entry, it was basically seen as an unfair way of rinsing the population. And people kicked back, hard. The riots which erupted in response to the measure spread across the whole of Britain, culminating in a protracted street battle in Trafalgar Square in London which signaled the end of Thatcher’s leadership. As a result of the tax and riots, her ratings hit rock bottom, her Deputy resigned, and a leadership challenge killed her long premiership stone dead. She stepped down at the end of the year, a shell of her former self. 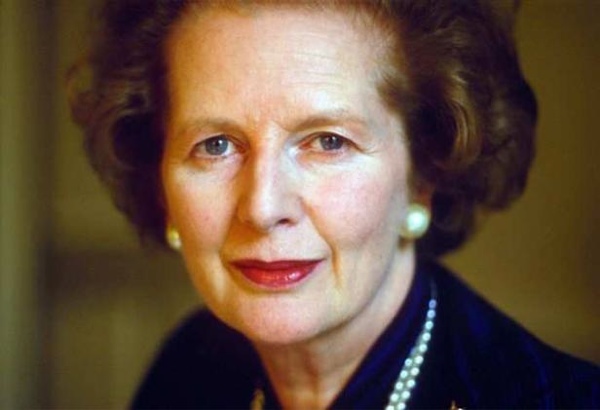 At the time she left office, Thatcher was the longest serving British PM of the 20th Century—having notched up eleven years in office. She was probably also the most divisive Prime Minister the country ever had, and made more enemies than Vito Corleone. But love her or hate her, there’s no denying that her legacy is the most-iconic of any British politician bar Churchill. And that’s gotta count for something.

Top 10 Reasons President Trump Will Be A Great Success