Our world is covered with plants, and we are surrounded. Previous lists have addressed some rather potent plant poisons, but this list looks at killer plants on an entirely new level of lethality. It’s not just picking petals or tasting berries that can kill. In some cases, just approaching the plant is enough to die. In this terrifying account, we will look at the sight-robbing potential of Giant Hogweed, the bizarre neurotoxic plant that can make you rob your own house, and the explanation behind Biblical legends of blood filled waters.

This list is fully referenced to document the dangers that lurk among the leaves . . . and the beaches. 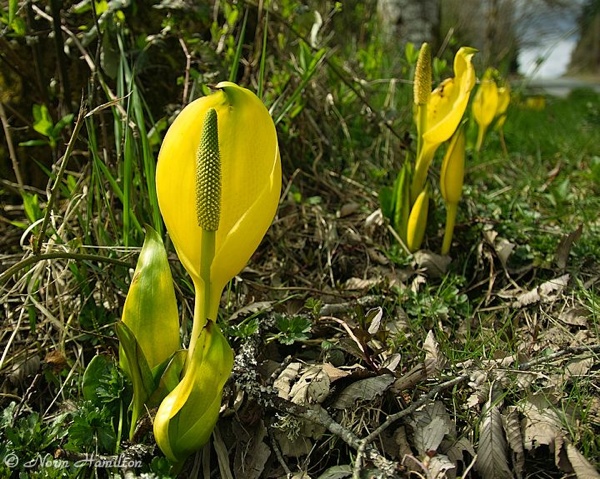 Skunk Cabbage is a huge, foul smelling North American member of the Aurum family. Native to swamps, the odor of the plant is often mistaken for an irate skunk until the huge golden or purplish flowers are seen emerging from the leaves. The appearance of the plant is like an alien artifact. Although certain parts of the Skunk Cabbage were found to be edible by Native Americans, it should be known that death from severe calcium oxalate poisoning may result from consuming the wrong parts in excessive quantities. The calcium oxalate is an extremely corrosive toxin that burns into the flesh, and may shut down organ systems. The author misunderstood a gardening book and tried a flowerhead. The result was extreme burning of the mouth and throat, serious illness for several hours, and two days of difficult swallowing. 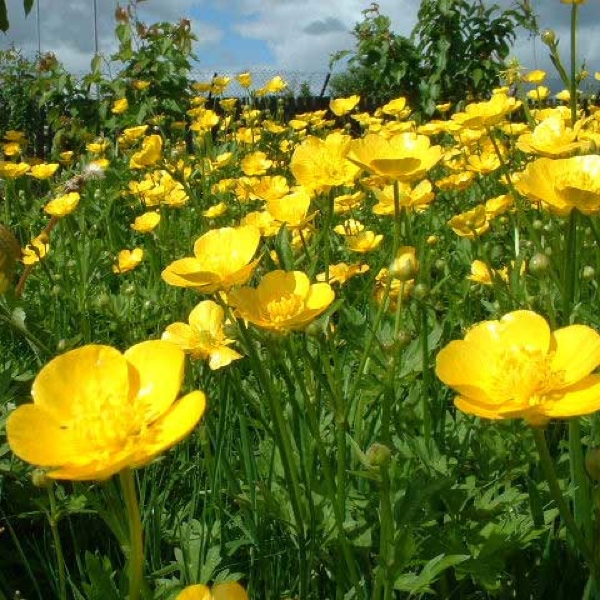 Buttercup is by far the most innocent looking plant on this list. It is also one of the most ubiquitous, and among the more deadly garden plants. Buttercup commonly grows in grassy patches with poor drainage, and may frequently be found by children who use it in games that involve touching it to the skin. The goal is to experience a momentary red mark on the skin, as the brilliant yellow flowers release a toxin induces temporary rash symptoms. Buttercup is far more dangerous, however. The plant is capable of poisoning grazing animals that eat it, causing serious gastrointestinal toxicity. Ingestion by humans may result in a painful death resulting from organ and nervous system intoxication. Beauty is clearly in the eye of the beholder, not the handler of this killer flower. 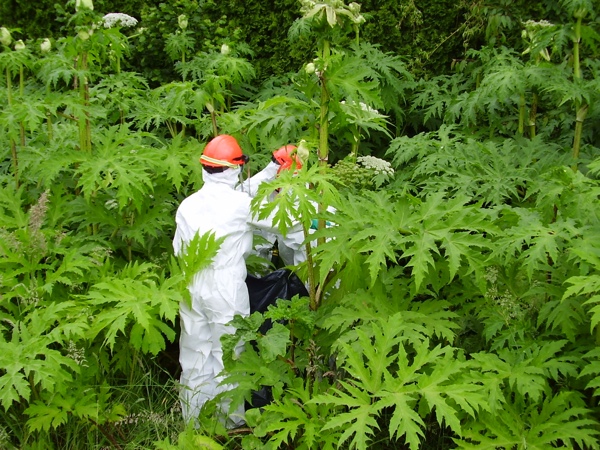 Giant Hogweed is truly the plant of nightmares. While many plants are toxic by ingestion, Giant Hogweed causes horrendous damage to humans just by mere skin contact. Looking like an emergence from an alien planet, the Giant Hogweed can only destroy a human through cooperation with an extra-terrestrial body—our Sun. Giant Hogweed is photosensitive, and oozes a thick sap that coats human skin upon contact. Almost immediately, the sap reacts with the sun and starts a chemical reaction that burns through the skin and tissues, leading to necrosis and the formation of massive, purple lesions that incredibly, may last for several years. Even more terrifying is the potential of a minute amount of sap to cause permanent blindness upon eye contact. Giant Hogweed plants grow up to 8 feet tall, and have become a priority emergency target for noxious plant control departments. Pigs, however, are immune. 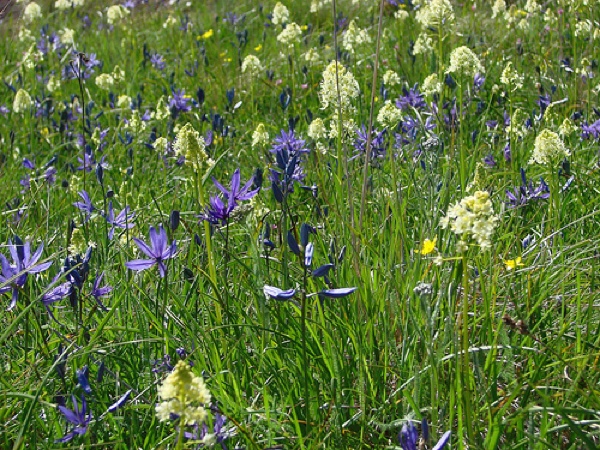 In the shire like Oak woodlands of Western North America, edible bulbs known as Camas plants dot the meadows with their bright flowers. First Nations actively cultivated the fields through scheduled burning, producing the potato-like food as a principle source of starch. However, a closely related species exists that looks similar to edible Camas. With a name like Toxicoscordion venenosum, it is immediately clear that this is one of the most toxic plants in existence. The Death Camas from edible camas can be distinguished by its moderately different coloration, and distinction is a matter of survival should one be persuaded to try Camas. Ingestion in anything but the smallest amounts results in rapid death through organ failure and blood disturbance. We can only imagine how the Death Camas was discovered. 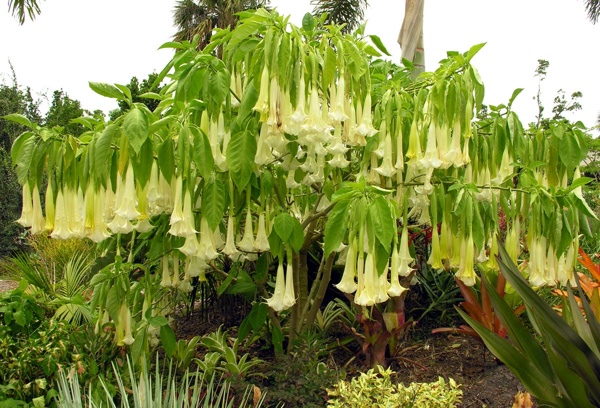 The spectacular Angel Trumpet vine is native to the forests of South America, and delivers a dark triad of potent toxins—atropine, hyoscyamine, and the mind altering scopolamine. Unlike the other plants on this list, Angel Trumpet is less dangerous in of itself, than as a biological weapon in the hands of humans. In 2007, Angel Trumpet was featured in the documentary “Colombian Devil’s Breath,” for its use by criminal gang members who refined scopolamine from the ethereal looking weed and used it to turn victims into zombies – literally. This “hypnotizing herb” leaves its victims unaware of the nature of their actions, but still completely conscious. The documentary contained numerous horror stories of scopolamine attacks, including one eerie case where a man had scopolamine powder thrown in his face, and promptly emptied his entire apartment into the van of the robbers. Voluntary experimenters have seriously injured themselves in their psychotic state. 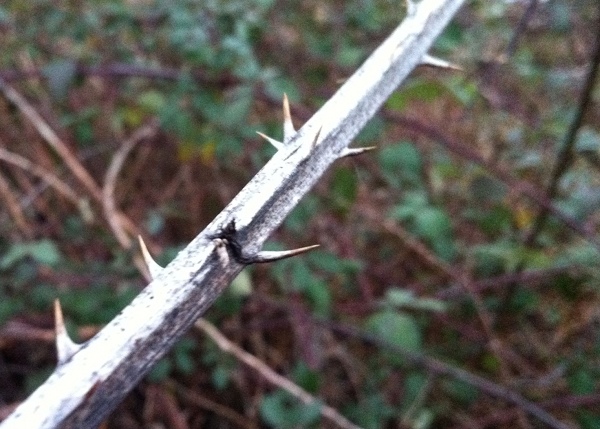 Himalayan Blackberry is one plant you don’t want to tangle with—literally. A briar on steroids, one plant can cover half an acre with treacherous slashers. Unlike normal blackberries, each stalk measures up to 2 inches across, and is covered with inch long thorns that extend like sharks teeth. While brambles might give you a scratch, an encounter with Himalayan Blackberries may warrant a visit to the emergency room. Slashes from even casual stumbles into the innocent looking plants may result in serious eye injuries and blood loss from damaged veins and arteries. Many accidents result when hikers trip in a gully infested with the hazardous spikes. Extreme protective wear including shatter proof safety goggles are favored by hazard management crews. The spiked canes are placed under tension as they tangle together, and upon disturbance, may fly back, acting as a mace capable of slashing eyes.

The Australian Gympie-Gympie tree distinguishes itself as the world’s most dangerous tree, and the most painful of all stinging plants trees. The Gympie-Gympie’s excruciating pain has been described as being sprayed with hot acid, and has driven those affected to suicide. In one disturbing case, a man shot himself after mistakenly using the leaf as toilet paper in the bush. The terrifying tree contains one of the most persistent toxins known to man, and burning sensations may continue up to two years after being stung. This may be due to poison retention inside the venomous needles injected upon contact. One researcher discovered that the poison remains viable for up to 20 years. Anaphylactic shock may be induced in even healthy persons, leading Australian forestry departments to issue hazmat grade suits to bush workers in affected areas. 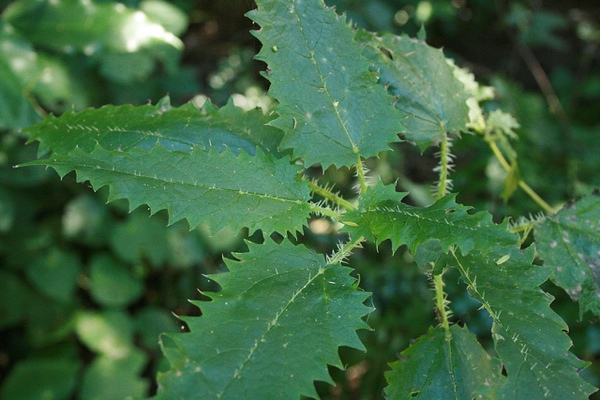 The New Zealand Tree Nettle is one of only two plants in the world that has killed a human just by the unfortunate act of walking into it. The monster plant is an enormous and super toxic tree version of the common stinging nettle, and may grow up to 15 feet tall. The well camouflaged plant is armed with unusually large needles that deliver a potentially lethal and also corrosive neurotoxin upon the slightest contact. Great caution when hiking is critical to preventing deaths. In one tragic documented case, a New Zealand Hunter was killed after brushing one of these terror nettles, causing nervous system shutdown through the acute venom effects. If death does not occur right away, potentially deadly polyneuropathy, a degenerative breakdown of nervous system pathways may occur over time. 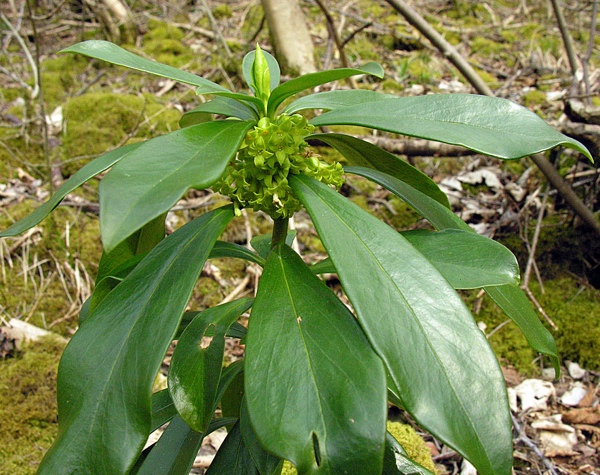 While Giant Hogweed scares with its alien appearance, we look at an unassuming plant with small, glossy leaves that may be commonly found in ornamental gardens and public grounds. Spurge Laurel is closely related to the Bay Leaf, but this woody mini-shrub offers one of the dreadful deaths in the Plant Kingdom. Containing powerful biocides, Spurge Laurel will cause blistering and irritation if cut or handled carelessly, but it is internally that it wreaks its havoc. Consumption of even a couple berries will result in major internal bleeding and organ failure, with death imminent within several hours. Interestingly, some tribes have used Spurge Laurel as a drug of last resort for seriously infected patients, but the cure may be worse than the disease. Wild Greenfinches can eat it without suffering any harm. 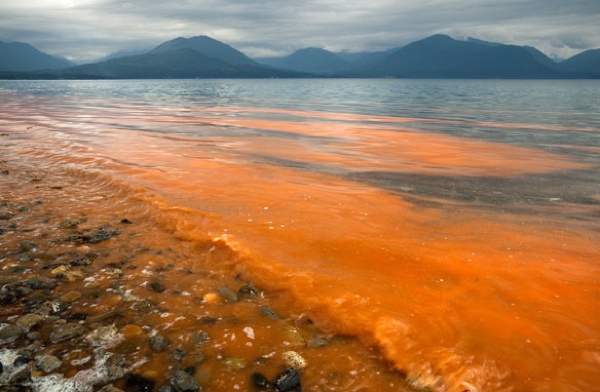 The Red Tide is a terrifying phenomenon that haunts the Earth’s coastlines. At certain times of year, the waters may turn a rust color as thousands of tiny seaweeds known as (Algera pelagius) multiply after mysterious influxes of nutrients, often in combination with temperature changes. The algae is rapidly absorbed by shellfish, and is extremely neurotoxic. The highly lethal bloom may rapidly paralysis limbs, and even worse, it anesthetizes the respiratory pathways upon exposure through contaminated shellfish. The Red Tide is considered to be the basis of the Biblical Plague where the waters turned to blood, and was noted to have caused the death of one of Captain George Vancouver’s crew upon the navigation of Western Canada. States and provinces have been closed to harvesting as a result of “paralytic shellfish poisoning” threats. In addition to human victims, entire beaches have been covered dead seabirds and ducks that were exposed to the toxic algae. Red Tide just might explain some of the mysterious animal deaths noted on a recent list.

Richard Everett is a hazardous plant control expert and environmental education writer based in Canada. He divides his free time between extreme birdwatching and raising awareness of Giant Hogweed poisoning.