If somebody asked you to list all the insects you liked, you could probably give an honest answer in the same breath it takes you to violently exhale after being asked such a ridiculous question. Because unless you’re an entomologist, the answer is always the same: butterflies, dragonflies, and ladybugs—pretty and harmless, and infinitely unlikely to burrow under your skin while you sleep. But give a dragonfly a chance to grow three feet long, and suddenly they don’t seem quite so harmless. In fact, if the Meganeura, or giant dragonflies, of prehistory were still around, they might be in charge of the planet instead of humans. That’s because dragonflies are some of the most brutal killers in the insect world. For example…

Fact: They Calculate Velocity For A Perfect Kill

The dynamics of capturing an object in mid-air are staggeringly complex, so much so that it’s usually something that’s only done by animals with complex nervous systems, like seagulls, or humans. To intercept something moving with its own velocity, you have to be able to predict where it will be in the future. When researchers began studying dragonflies in 1999, they found that rather than “track” their prey—follow it through the air until they caught up with it—they would actually intercept it. In other words, dragonflies ensure a kill by flying to where their prey is going to be.

That indicates that dragonflies calculate three things during a hunt: the distance of their prey, the direction it’s moving, and the speed it’s flying. In the space of milliseconds, the dragonfly calculates its angle of approach and, like a horror movie monster, it’s already waiting while the hapless fly stumbles right into its clutches. 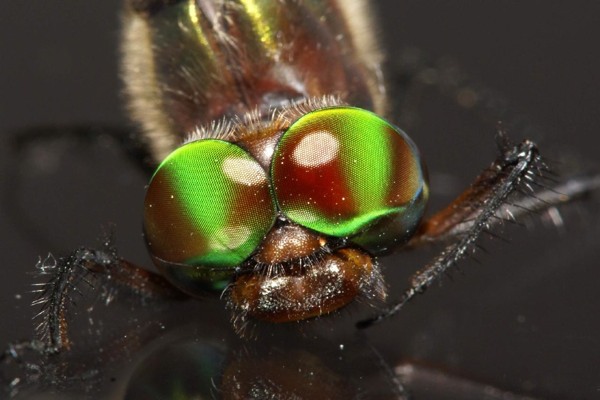 Fact: Their Eyes Are Incredibly Advanced

Most insects have multifaceted eyes—house flies, for example, have about 6,000 eye facets that give them a panoramic view of their surroundings. It’s the reason their eyes look like honeycombs up close. But with 30,000 individual facets, dragonflies blow them—and every other insect—completely out of the water. Each facet, or ommatidia, creates its own image, and the dragonfly brain has eight pairs of descending visual neurons to compile those thousands of images into one picture.

And it gets even crazier; dragonflies have visual senses that would be considered superpowers by any human standards. Human eyes have three opsins—proteins that sense light—giving us a color range of red, green, and blue (one for each opsin). Dragonfly eyes can have four or five opsins, allowing them to perceive the normal color spectrum, along with UV light and the plane of light polarization (the effect you get with polarized sunglasses). This is believed to help them navigate and reduce the sun’s glare on a body of water. These eyes are also the reason….

Fact: They Can See In All Directions

The massive bulbous eyes of a dragonfly wrap around its head like an astronaut’s helmet, giving it a 360 degree view of the world. As dragonfly researcher Dr. R. M. Olberg put it, “They can see you when they’re flying towards you, and they can see you when they’re flying away.” Obviously, this is a valuable tool for escaping predators. The above video (4) shows a dragonfly escaping the clutches of a frog who lunges at it from behind and underneath—in most insects, that’s their blind spot. Dragonflies themselves take advantage of that when they intercept their own prey—they attack from behind and underneath. But dragonflies don’t have blind spots, and they’re notoriously hard to catch.

Okay, one more fact about dragonfly eyes before moving on. When they hunt, the compound eyes of a dragonfly allow it to sort of “section off” its visual field, like a grid. Keeping their prey in the same section of the grid helps with that incredible accuracy when they intercept something mid-flight.

Here’s a human comparison—draw a grid on the windshield of your car and pick a target. A goat, let’s say. Aim the car so that the goat is in one square of the grid. Now drive towards the goat, keeping it within the same square. The goat will get larger as the gap closes, but your angle in relation to it will not change, even if it’s moving. You will hit it 100 percent of the time. (But please, don’t actually do that. It’s just an example). 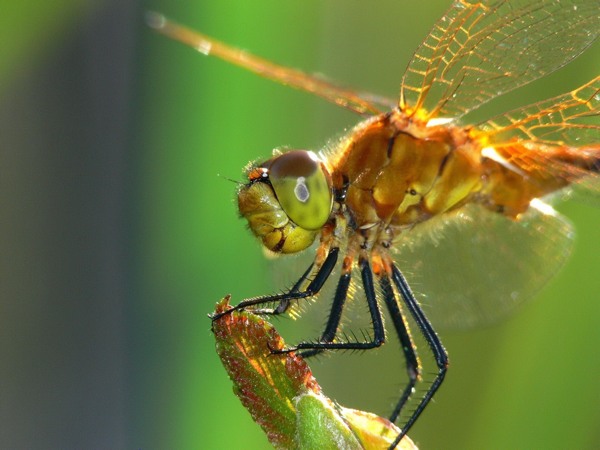 That example did serve a purpose though—dragonflies are incredibly efficient at what they do, bringing in close to 95 percent of the prey they set out to capture. For comparison, sharks, one of nature’s fiercest predators, only manage to catch about half of the prey they hunt. Lions, the shark of the land, are lucky to get their claws on a quarter of their targets. See, even lions don’t calculate to intercept—they chase, zig-zagging through the savanna in response to the movement of their prey. If dragonflies were large enough to eat gazelle, lions would be starved into extinction through sheer inefficiency.

When a dragonfly sets its sights on a target, it will almost always end up with a meal. It also helps that… 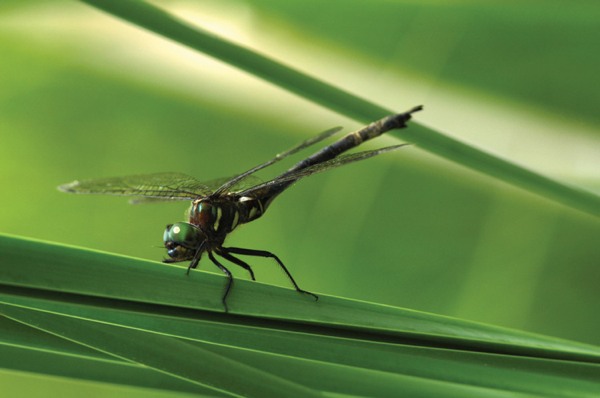 Fact: They Can Isolate Their Prey In A Swarm

We lied when we said we wouldn’t talk about their eyes anymore. The truth is, there’s an even deeper level of crazy at work here, as Dr. S.D. Wiederman discovered when he began studying the way Emerald dragonflies select their prey. Curious about the way dragonflies hunt, Dr. Wiederman and his team placed a nano-electrode inside the visual processing neuron of a dragonfly. They then positioned the “subject” in front of a TV monitor with two moving objects.

In simple nervous systems, multiple objects tend to fade out; the insect can’t handle the attention multitasking. But dragonflies have the ability to switch their attention between objects at will. Under observation, the dragonfly focused first on one object, then shifted to watch the second, then shifted back to the first again, never losing track of where they were. This selective attention span allows the dragonfly to single out one target in a swarm, then zero in on it exclusively—while remaining aware of the the rest of the swarm to avoid a collision. 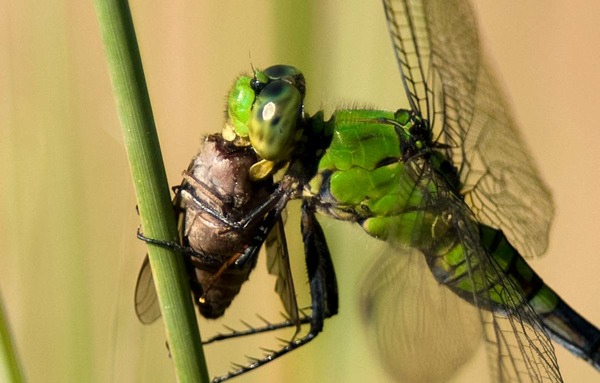 It’s a good thing dragonflies are so well adapted to hunting, because they are voracious eaters. Stacey Combes, a Harvard researcher who uses high speed cameras to study the flight mechanisms of dragonflies, stated that one dragonfly they were studying went through thirty flies in quick succession—and would have kept eating, if it had more to eat.

True to their predatory lifestyle, dragonflies are also varied in what they eat. Usually they’ll go for small flies or mosquitoes—easy prey—although they will also eat butterflies if they can bring them down. Smaller dragonflies make another good meal in a pinch.

Fact: They Can Maneuver Their Wings Independently

One of the most distinguishing features of dragonflies is the way their wings work. Their four wings operate independently of each other, allowing it to maneuver in mid-air like a helicopter—they can hover, fly forwards, backwards, and sideways, and instantly change direction whenever they need to. Dragonflies can even fly upside down if they need to. With the exception of damselflies (which belong to the same order), dragonflies are the only insects with this amount of control over their wings. Delicate yet powerful, each wing is connected to the thorax with a separate muscle group.

The video above perfectly captures the seemingly chaotic motion of a dragonfly’s wings as it ambushes a fruit fly. Using minuscule shifts and adjustments with each wing, the dragonfly can aim itself perfectly, placing it directly in the path of an incoming fly. And once it catches its prey, it shows no mercy, because…

3
Death Grip
Damselfly eating a spider after being caught in its web.

Fact: They Crush Their Prey To Pulp

Dragonflies belong to the scientific order Odonata. In Greek, that means “toothed ones,” which is fitting because dragonflies mash their prey to a pulp with powerful serrated jaws. You don’t normally think of dragonflies as dangerous; in fact, most small dragonflies aren’t powerful enough to break a human’s skin (although larger ones can, and will). To a small fly, however, those jaws mean instant death.

Dragonflies do two things when they intercept their prey: first, their front legs curve up to cage it in, cutting off its escape. Second, their hinged jaws clamp down and shred the wings of the fly, immobilizing it. After that, they’re free to chow down without any chance of losing their prey. Dragonfly jaws can open as wide as their entire head, allowing them to eat virtually anything within reason, and they’ll often consume their food in mid-air without even bothering to land. Even near-death experiences will get their appetite going—the damselfly in the clip above got stuck in a spider’s web, only to eat the spider when it got close enough. Some creatures just have a will to live. 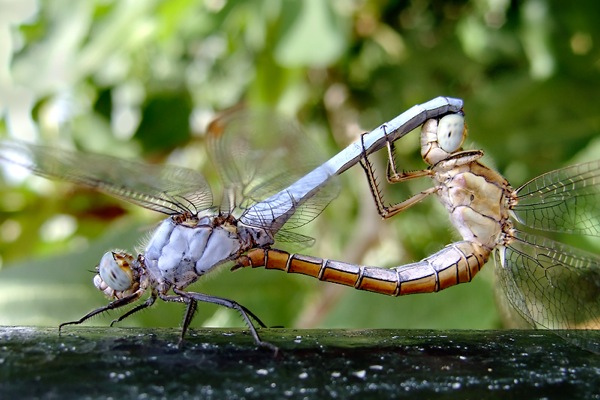 Most animal species go through some sort of courting routine before they mate; dragonflies don’t have that much time—there’s food that needs eating. So they forcefully mate with the first female they come across, and we mean forcefully. A male will first locate a female by he flight patterns to make sure she’s the right species. Then he approaches from behind, clamps his forearms around her neck—sometimes with a vicious bite to subdue her—and signals his body to begin transferring sperm to the right place. See, male dragonflies store sperm in a segment at the end of their bodies, even though their penises are higher up. So once he’s in position, the male will start the semen transfer.

But he’s not idle while he does this. Female dragonflies will usually mate with multiple partners, and in the oddest evolutionary quirk outside of the Brazilian Wandering Spider’s erection-causing venom, dragonflies have developed barbs on their penises that serve no other purpose besides scooping a previous suitor’s semen out of a female dragonfly. With all obstacles out of its way, the dragonfly will then mate—and all of this happens while the two dragonflies are airborne.

And in some cases, the male will continue to guard the female until the eggs are fertilized, preventing her from being raped by any other males to increase his chances of fatherhood. 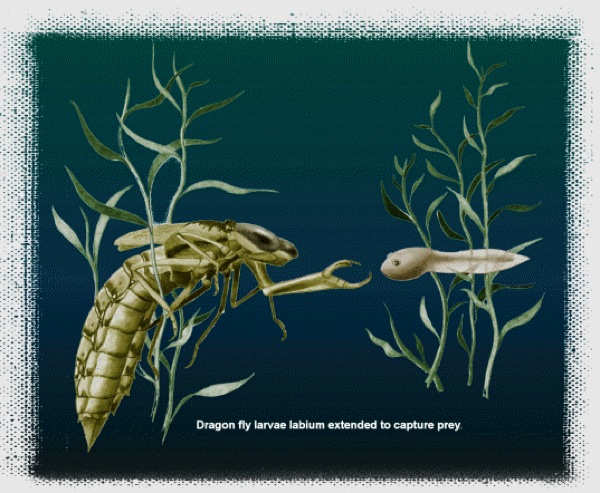 Fact: Even Their Babies Hunt

If anything, dragonfly nymphs are even more cold-blooded than their adult counterparts when it comes to killing. Like many insects, dragonflies begin life with a larval stage. Dragonfly larvae, or nymphs, live underwater and scoot through the water by shooting a jet of water out their rectum, like tiny torpedoes. Some dragonflies live like this for up to five years, before spending a relatively short six or seven months as an adult.

During their waterborne life, they hunt small insects and other larvae, especially mosquito larvae, that are in the water with them. But in many species, the diet doesn’t stop there—some dragonfly nymphs will even eat tadpoles and guppies, snagging their prey with powerful jaws and the same vicious tenacity that will dictate their lives as adults.