When someone does something outrageous, people often rush to use the phrase, “What is the world coming to?” But the fact of the matter is, human beings have always been weird. They were doing strange things long before you and I were born, and they will carry on being odd long after we are gone.

Archaeologists are constantly uncovering all kinds of bizarre artifacts and discoveries from the crazy civilizations of yore. Here are ten of the most ludicrous things they have found out about our absurd ancestors.

10 The Cannabis Smokers of Ancient China

In the mountains of ancient China, more than 2,500 years ago, people smoked cannabis to get high. Archaeologists have found evidence of long-gone stoners during an excavation of Jirzankal Cemetery. Jirzankal is a historic burial place in the Pamir Mountains of Central Asia—an area now in China. Scientists studied incense burners from the site and found marijuana residue that they believe dates back centuries. The samples are rich in THC, the psychoactive substance found in weed.

Scientists found the residue on the pipes had a higher concentration of THC than the wild cannabis in the region. Researchers suspect that, in ancient times, locals would gather or even domesticate certain strains of cannabis for their mind-altering properties.

The excavation of Jirzankal threw up some interesting discoveries. Scientists analyzed the bones buried at the site and found that many of them were not native to the region. These immigrant remains support the theory that the Pamir Mountains used to be connected to an ancient Silk Road-type trade network. According to co-author Robert Spengler, this suggests that marijuana may have been exchanged along the pathway.[1] 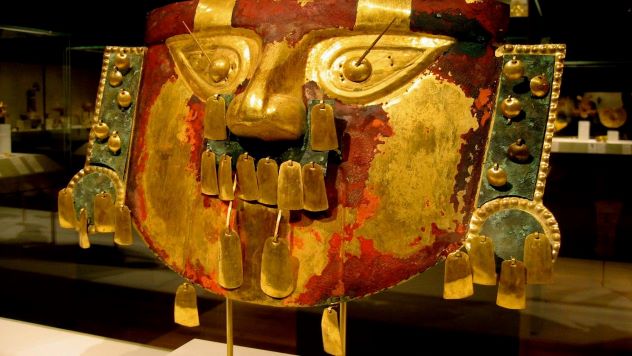 Before the Incas, many civilizations lived in the area of South America we now know as Peru. For around 500 years, the Sicán culture occupied the region. Unfortunately, much of their history has since been erased, which means historians know relatively little about the ancient peoples.

In the 1990s, archaeologists uncovered a thousand-year-old Sicán tomb secreted under the Huaca Loro temple. The excavation turned up various bizarre objects, including an upside-down skeleton painted red and surrounded by the bodies of two women and two children, with a gold mask placed on the man’s disembodied skull.

The mask, just like his remains, had been painted red using cinnabar. Historians believe that the Sicáns only used the mineral for respected people. This suggests the skeleton was once someone of high status.

However, there was one mystery that left the scientists scratching their heads. How had the cinnabar stuck to the gold for such a long time? It took until 2021 for researchers at Oxford University to solve that conundrum. Infrared analysis revealed that the paint was bound using human blood and egg whites. Scientists believe that this had some cultural significance to the Sicáns, possibly something to do with reincarnation.[2]

What Can You Learn From Ancient Poop?

It doesn’t sound like the most pleasant job, analyzing the excrement of 2,700-year-old miners. But scientists have learned a lot about the diets of ancient workers in the salt mines of the Alps.

Human feces tend not to last very long before starting to decompose. The excreta found in the Alps were only preserved due to the cool, dry atmosphere and the high level of salt.

Microbiologist Frank Maixner was stunned to see that the miners had the knowledge and the ability to ferment their food. Maixner, who works at the Eurac Research Institute in Bolzano, Italy, described it as “very sophisticated.” Throw in some Buffalo wings, and they’d be ready for this century![3]

7 The Mysterious Mummies of the Silk Road

In the Tarim Basin, an area of desert in northwest China, lie hundreds of human corpses. The dry climate of the desert has preserved these bodies for thousands of years. The oldest is thought to date back to 2,000 BC, while the youngest arrived in AD 200.

Although they are buried in China’s Xinjiang Uyghur Autonomous Region, only a short distance from the Silk Road, the Tarim Basin mummies look nothing like the locals. Instead, they have features that historians have described as “Western.” They were buried in boat-like wooden coffins, which were covered in cowhide. And evidence found at the site suggests they farmed sheep and goats, grew wheat and barley, and even made cheese.

For years the origins of these mummies have been something of a mystery. But in 2021, genetic analysis revealed that the oldest are directly descended from the Ancient North Eurasians, who lived in the vast plains of North Eurasia (Northern Steppe and Siberia) many thousands of years ago.[4]

Ancient burial of a warrior with a non-binary person discovered

In 1968, archaeologists in Finland unearthed a 900-year-old grave containing a person in women’s clothing with a sword. They were lying on a soft feather blanket alongside other grave goods and furs, indicating they were likely a well-respected individual in the community. But scientists struggled to agree on the remains found within. Some argued that the body was that of a female warrior. Others disagreed, asserting that the tomb contained a man and a woman.

In 2021, over half a century after the grave was excavated, researchers finally learned the identity of the mysterious remains. DNA analysis revealed the body to be gender non-binary, meaning they were born with an unusual set of chromosomes.

Chromosomes play a vital role in determining the sex of a child. Girls are usually born with two X chromosomes, and boys with an X and a Y. But scientists believe the deceased Finn had two X chromosomes and one Y—a condition known as Klinefelter syndrome. People with Klinefelter syndrome generally have male characteristics, but many contend with low testosterone levels, enlarged breasts, and infertility.

As lead author Ulla Moilanen explained, “If the characteristics of the Klinefelter syndrome [had] been evident on the person, they might not have been considered strictly a female or a male in the early Middle Ages community.” [5]

How Did Science Get Neanderthals So Wrong?

Neanderthals were fascinating people. Scientists believed that prehistoric humans ate, among other things, raven-like birds known as choughs. But this led scientists to wonder how the primates caught their dinner without the help of modern technology. How do you chow down on a chough if all you have to catch it with is your bare hands?

To investigate further, a team of researchers decided to test it for themselves. Evolutionary ecologists from Estacion Biologica de Donana in Spain ventured into dim-lit caves and, without any tools to help them, managed to catch over 5,500 choughs. On a good night, the group could capture 200 birds. At other times, they only managed to grab a few dozen. All they needed to trap their feathered targets was a small source of light.

This might sound like something only a mad scientist would attempt, but the team says they found the experiment illuminating. Literally. Scientists now believe that Neanderthals could generate fire to light up their surroundings. It also points to them having had much higher cognitive abilities than we once thought.[6]

4 Did Humans Hibernate During Winter?

Half a million years ago, our human-like ancestors would survive harsh winters by curling up in caves and hibernating. Or at least they might have, according to a 2020 research paper by two European paleoanthropologists. Fossil evidence suggests that our long-gone forebears used to lie dormant during the winter months, although scientists doubt they were any good at it.

Archaeologists have turned over at least 1,600 human fossils from the caves of Atapuerca in Spain. By studying bone structure and growth, the study’s authors determined how people lived at the time. Records indicate an annual drop in nutrition and vitamin D from the sun. Scientists say this suggests our ancestors possibly spent the winter in hibernation.[4]

3 The Ancient Act of Exorcism

Deep in the British Museum lies a 3,500-year-old tablet. Drawn on it is what researchers believe to be the oldest ever depiction of a ghost, along with instructions on how to conduct an exorcism.

Dr. Irving Finkel, an expert in ancient civilizations, only discovered the image in 2021 on a tablet in one of the museum’s vaults. It shows, Finkel explains, a young man accompanying the ghost of a middle-aged woman back to the underworld. On the back are instructions for helping dead spirits out of the realm of the living.

The scribe recommends making two figurines, one male, one female. According to the tablet, they must be dressed and given various useful items, including a comb and a bed. The ritual involves waiting until sunrise to prepare two beer vessels and reciting an incantation to Shamash, the Mesopotamian god of the sun. The instructions end with one final piece of advice: “Do not look behind you.” [8]

2 The Iron Age Skiers of Norway

The Best-Preserved Pair of Skis from Prehistory

In the mountains of Norway, as the ice sheets melt away, strange discoveries rise to the surface. It was there that glacier archaeologists uncovered a remarkable pair of 1,300-year-old skis. The first of the two skis was found in 2014 on Digervarden Mountain in the southern county of Innlandet. The second turned up seven years later, only 5 meters (16 feet) from the first.

It took a lot of effort to free the second artifact from the ice. The team decided to return to Digervarden after spotting satellite images showing the receding ice sheets. Their first attempt to retrieve the ski left them empty-handed, but a mix of mild weather, pickaxes, and boiling water helped pry it loose.

This discovery is particularly noteworthy due to skis being in such astonishing condition. Secrets of the Ice, the treasure-hunting researchers who uncovered both skis, reckon they could be the best-preserved prehistoric skis ever seen.[9]

1 The Prehistoric Origins of Genital Herpes

The Two Viruses That We’ve Had For Millions of Years

In 2017, scientists discovered the ancient human ancestor responsible for genital herpes. The genital herpes virus, also known as HSV2, dates back millions of years. It is a close relative of HSV1—the cold sore virus. For much of that time, genital herpes was only an issue for chimps and similar primates. Our ancestors were lucky enough that it did not affect them. But at some point in history, around 3 to 1.4 million years ago, the viral blisters jumped the species barrier and began infecting early humans as well.

Researchers in Britain used data modeling to pinpoint the primate that caused HSV2 to leap across species. It turns out the guilty party is Paranthropus boisei. They are a stocky, human-like species with small brains and dish-like faces. Scientists predict that these robust primates picked up the virus while scavenging for chimps to eat. At some point, early humans likely ate the infected P. boisei, at which point they would have started contracting genital herpes too.

“Herpes infect everything from humans to coral, with each species having its own specific set of viruses,” explained University of Cambridge researcher Dr. Charlotte Houldcroft. “For these viruses to jump species barriers, they need a lucky genetic mutation combined with a significant fluid exchange. In the case of early hominins, this means through consumption or intercourse—or possibly both.”[10]