From surviving ancient manuscripts it is clear that there has always been a belief that new lands could rise up from the ocean, while old ones could sink into the sea, destroying former civilizations in the process. The most famous of all the lost lands is that of Atlantis, described in great detail by Plato almost 2,500 years ago. During the past century as we developed the technology to fly and with the advent of sonar and better diving equipment, numerous underwater anomalies have been discovered. Sites such as the Bimini Road have been probed and discussed at length by many, but not all of the sites are so close to the surface, and often times the depth of the water limits our investigations to sonar images and samples taken by submersibles.

10
Mound in the Sea of Galilee 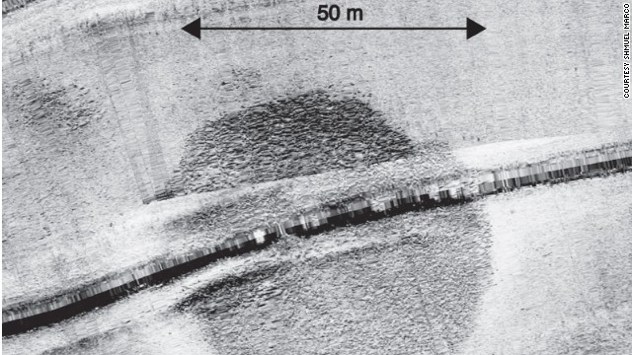 In 2003, scientists were surprised to discover a massive circular stone structure underneath 30 feet (9 m) of water in the Sea of Galilee. The structure is comprised of basalt rocks, stacked in a cone shape and it is twice the size of Stonehenge in the UK. In their findings that were only recently published, archaeologists have noted that it shares some features of ancient communal burial sites found worldwide, but it may also be a ramp or a ceremonial structure. As they have never come across a structure of this size, with its specific features, they can only speculate as to its exact age, how it was constructed and how it was used. 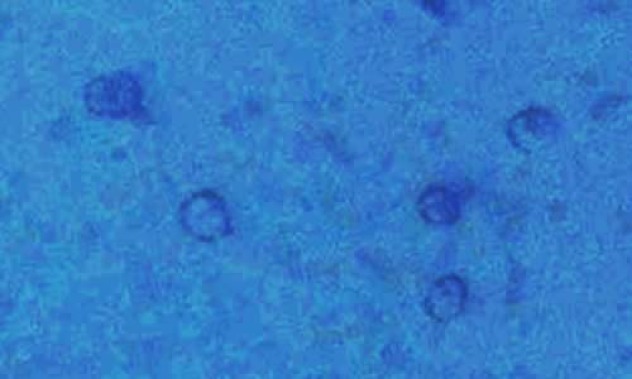 The circular anomalies that can be seen off the coast of Florida, North Carolina, and Belize have been documented by enthusiasts and archaeologists alike. Even though they are found on a global scale, their true objective hasn’t been discovered so far – many believe they were used as an ancient type of burial mound. They are also very similar to stone structures that have been found in Saudi Arabia that can be seen on this website. It is believed that the underwater structures have been better preserved than those on dry land and may date back to ±8,000 BC. as those in Saudi Arabia have been dated to around 7,000 BC. 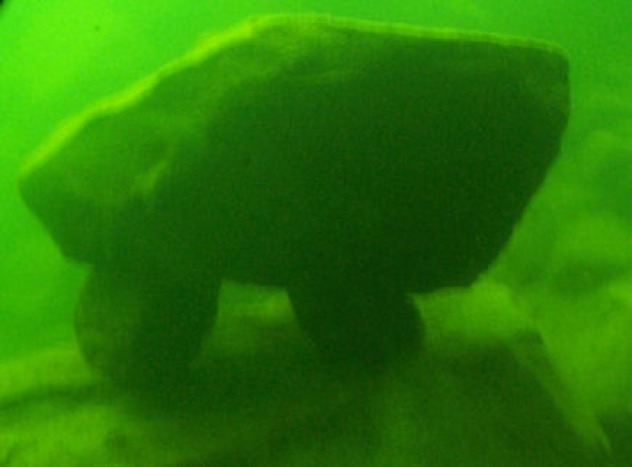 Divers discovered proof of Eastern Canada’s ancient past while taking part in a unique submarine project in 2005. They found the very curious stone structure at a depth of 40 feet (12 m) below the surface. It consists of a massive 1,000 lb (453 kg) elongated rock with an almost completely level surface resting on 7 baseball-sized stones, which in turn sits on a huge several thousand pound slab on top of a ledge. It was thought to be a natural formation until geologists and archaeologists looked at the images. The discovery of the man-made “rock cairn”, was deemed to be proven when an underwater archaeologist concluded the existence of three shims was enough proof that the structure was man-made.

Whether it is a UFO, a Nazi anti-submarine defense tool or simply a glacial rock that has been dragged across the sea floor, the discovery of the disc-shaped Baltic Sea anomaly (and its subsequent investigation in 2012) kept all the interested parties on the edge of their seats. Although Swedish explorers generally convinced everyone that it is a rock and not a UFO, their research has raised a lot of questions. Firstly, the rock didn’t have a silt-layer on it, which is usually the case when rocks have been lying still at the bottom of the ocean for any period of time. Furthermore, the 196 feet (60 m) wide rock seems to be covered by construction lines and boxes and it appears to be propped up by a 26 foot (8 m) high pillar. 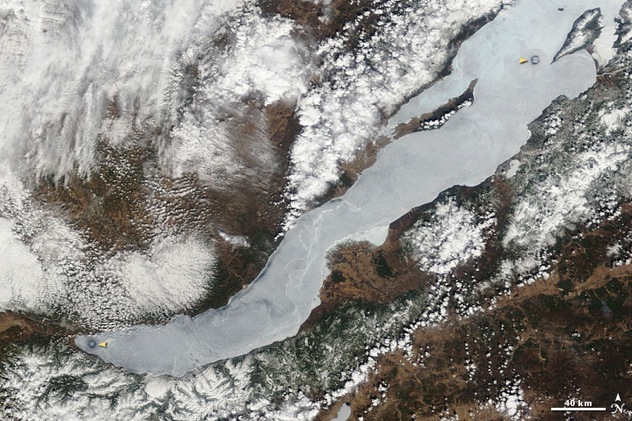 Lake Baikal in southern Siberia is unique in many regards. It is the oldest, deepest and largest fresh water lake on earth. The sediment deposit on the bottom of the lake is more than 4 miles (7 km) deep and many of the fish species that thrive in its waters can be found nowhere else on earth. As its ice cover normally lasts into June, astronauts on the International Space Station were alarmed to see a very large circular area of thinned ice near the southern end of the lake in April 2009. To their astonishment, there was also another feature above a submarine ridge that divides the lake. Although the origin of the circles is a mystery, the distinct pattern would suggest that warmer water were brought to the surface, but hydrothermal activity has never been observed over the very deep water at the southern tip of the lake. 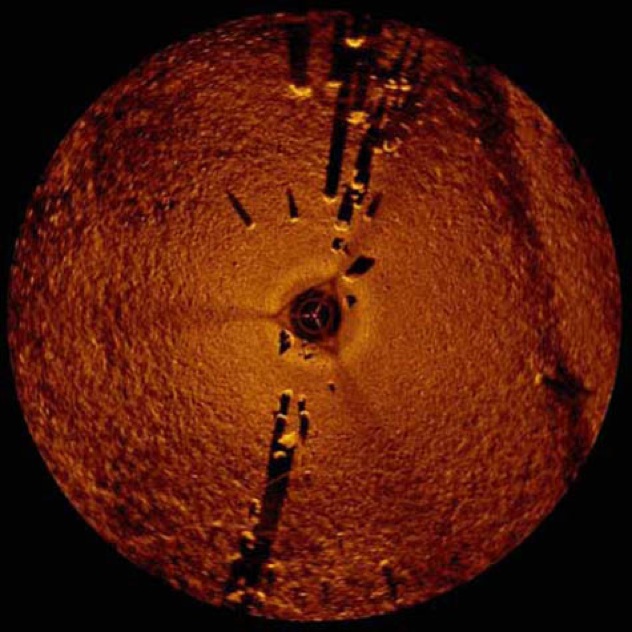 Even though Stonehenge in the UK is one of the most famous historical stone monuments in the world, it is not unique. Similar stone arrangements have been found worldwide. In 2007 while surveying the bottom of Lake Michigan with sonar, a team of underwater archaeologists discovered a series of stones aligned in a circle 40 feet (12 m) below the surface. One of the stones also seemed to feature a carving of a mastodon, an animal that has been extinct for 10, 000 years. If the site is validated, it would not be completely out of place, as other stone circles and petroglyph sites can be found in the vicinity. 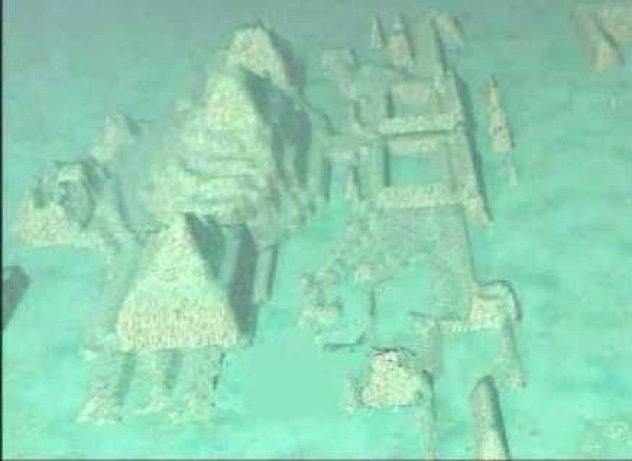 A series of submerged structures discovered off the Cuban coast in 2001 captured the imaginations of archaeologists, researchers and Atlantis-hunters worldwide. Found by a company doing surveying work, the sonar images have shown symmetrical and geometric structures that covers an area of 200 ha (almost 2 square km) at depths between 2,000 and 2,460 feet (± 700 m). Skeptics believe the site is too deep to be manmade as it is estimated that it would have taken the structures 50,000 years to sink to their current depth. If conclusive proof can be found that these structures were indeed manmade, it would back up the Maya and local Yucatecos stories of an ancient island inhabited by their ancestors that vanished beneath the sea. 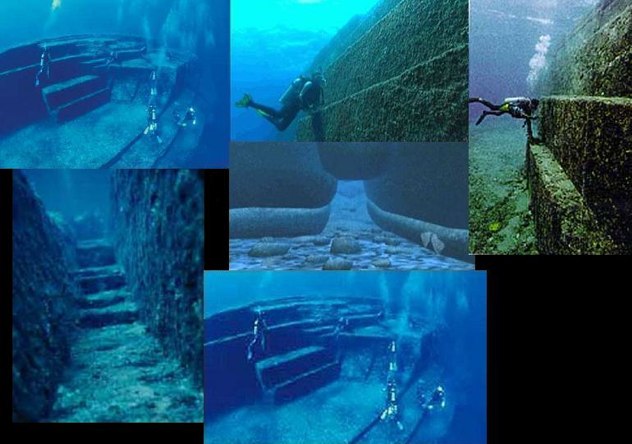 Since its discovery in 1987, the massive Yonaguni Monument off the coast of Japan has been a subject of debate between scientists, archaeologists and scholars. Many supporters claim that the site is natural but may have been modified by human hands like the rock-hewn terraces of Sacsayhuaman. If proven true, the site would have been modified during the last ice age – around 10,000 BC. Skeptics on the other hand believe the whole structure to be natural; that the drawings and carvings observed are nothing more than natural scratches. The fact remains that although Yonaguni’s features can be seen in many sandstone formations worldwide, the high concentration of questionable formations at one site is unlikely. 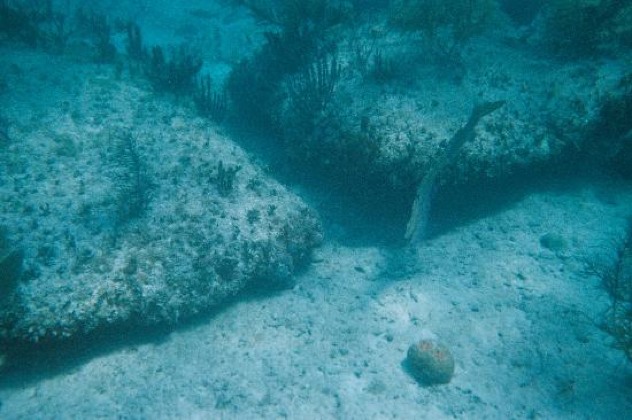 During expeditions in 2006 and 2007 the deeper waters to the west of Bimini were mapped using side-scan sonar and sub-bottom profiling. A number of rectangular features were discovered at a depth of 100 feet (30 m). They are all aligned in the same direction in straight, parallel lines. The researchers have claimed that the structures appear to be very much like those found off the coast of Cuba. At a later dive managed by the History Channel, the formations were better observed. There are about 50 stone piles, mainly 10 by 45 feet in size, and all at a depth that would place their age around 10,000 BC. 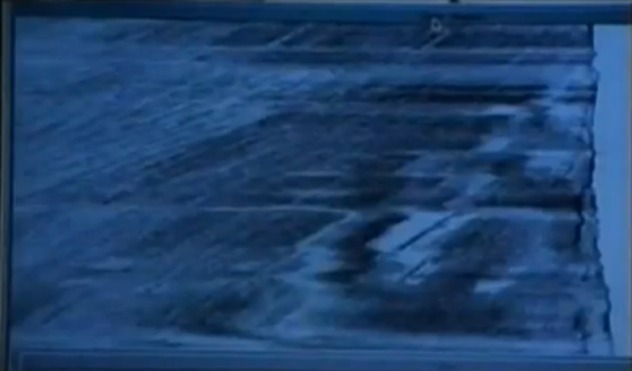 In May 2001, it was announced the ruins of an ancient city was discovered in the Gulf of Khambhat. The discovery was made with the help of sonar while routine pollution studies were being done. During the announcement, the site was described as evenly spaced dwellings, a drainage system, bath, granary and a citadel that pre-dates the Indus Valley Civilization. During follow-up investigations, the area was dredged and several artifacts were recovered. Among them were wood (dated ± 7,000 BC), stones described as hand tools, fossilized bones, pottery sherds and a tooth. Among the controversies are that all the supposed artifacts are stones of natural origin, that the “sherds” are natural geofacts and that the dredging could have allowed errant artifacts to be dug up along with the site’s, removing all credibility from the finds.

Hestie lives in Pretoria, South Africa. She is amazed by all the mysterious discoveries that dates back to 10,000 years ago

10 Explanations for the Bermuda Triangle