We live, work, and play in buildings designed to shelter us from the outside world. These structures are one of the hallmarks of human civilization, and they’re so commonplace that you never really give them a second thought. But once a building’s purpose becomes unnecesary, once the life has drained away from years of neglect and disrepair, you’re left with nothing more than an empty shell—a twisted metal corpse where shadows lurk and nature creeps back to claim its own, one cracked cinder block at a time. These 10 buildings, once vibrant with life and activity, were all abandoned for one reason or another—and in many cases, some disturbing things were left behind. 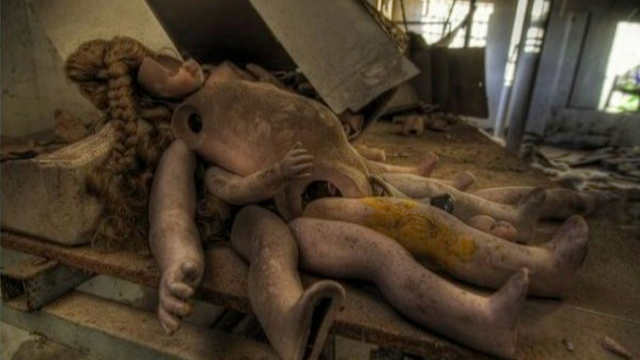 This doll factory in Spain has an uncomfortable way of getting under your skin. It was abandoned sometime in the ’80s, but for some reason everything was left behind—boxes of doll parts, machinery, half-finished dolls still lying on the assembly line—everything. It’s as if everybody just vanished in the middle of the work day. At the time the factory was in operation, porcelain dolls were commonly made with human hair, which somehow makes these things even creepier.

The three-story building remains largely unchanged to this day, except for the floor in one wing, which collapsed at some point. There isn’t even much graffiti to show that other people have explored it. According to one photographer who visited the factory, the entire third floor was covered in a mountain of ceramic arms and legs. This was followed by the unintentionally creepy “the heads and bodies were much more rare.” This place is a horror movie waiting to happen. 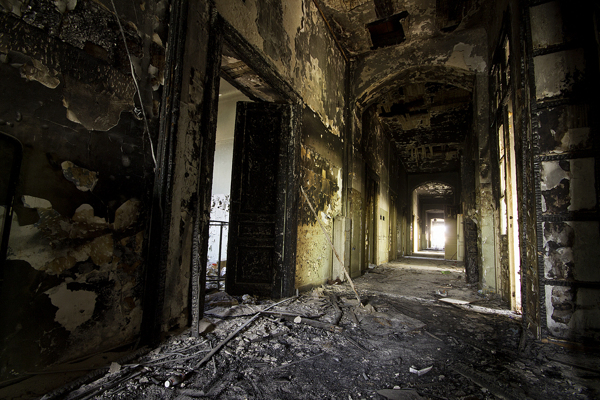 Pula is a city in Croatia best known for a scattering of ancient ruins from the Roman empire, including a large amphitheater built in the first century A.D. and the famous Gate of Hercules. But it also has at least one ruin of a different type—a massive abandoned hospital, hurriedly closed down in 2003 and still littered with rusting medical supplies, peeling wallpaper, and collapsed hospital beds that once held the sick and the dying.

Nobody seems to be sure why this particular hospital was abandoned, but one thing is certain: It’s not alone. Before 1991, Croatia was part of Yugoslavia. After the new government was set up, a lot of the old government-controlled facilities (hospitals, schools, military installations) were either phased out or abandoned completely. This hospital appears to be a throwback to earlier days, even though it was still apparently running for another decade. Interestingly, hotels and resorts in Croatia are now heading down the same path—there are over 100 abandoned hotels throughout Pula and other cities. 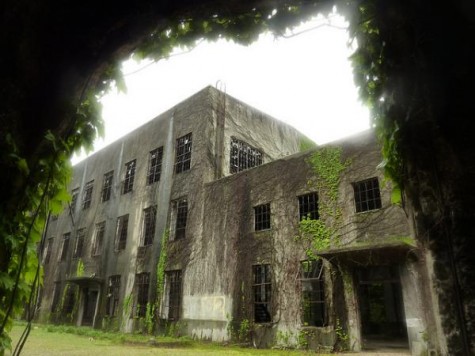 Okunoshima Island is a small speck of land off the coast of Japan—so small, in fact, that it didn’t appear on most maps until 1988, when the Japanese government constructed a museum on the island in memory of the people who worked there during World War II. But despite its size, the island played a surprisingly large role in the war. Specifically, it was the location of a top secret chemical weapons factory that mixed together more than 6,000 tons of mustard gas between 1927 and 1945.

Half a century later, the derelict chemical plant is still standing, and, although the island is open to the public, visitors aren’t allowed to go inside because of the risk of contamination. It’s believed that there are still hastily hidden stores of mustard gas dotted around the island, but nobody really knows because all the records from the plant were burned at the end of the war. 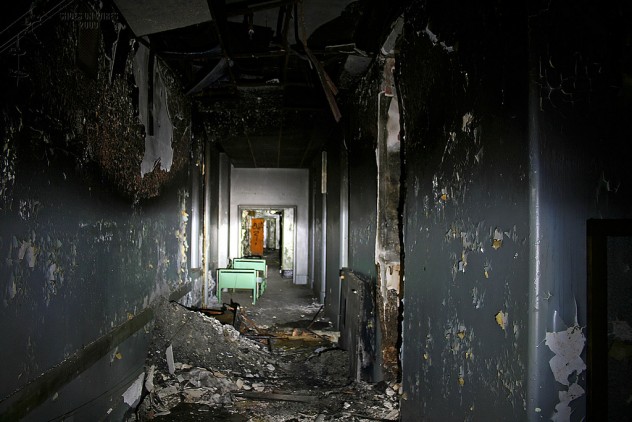 Riverview wasn’t your normal hospital—it was an insane asylum. And thanks to decades of horror movies, that means we’re already terrified of it. It opened in 1913 and finally shut its doors for good in 2012, when the last remaining patients were transferred to a nearby hospital. Although it hasn’t been abandoned long, the image above shows the state of disrepair that the building had fallen into over the years. Even before it closed, many of the buildings on the grounds were crumbling, abandoned, and neglected.

Because of its unique architecture and the fact that it’s, well, an insane asylum, Riverview has been used as a filming location in over 50 movies and TV shows, such as the X-Files and Fringe. 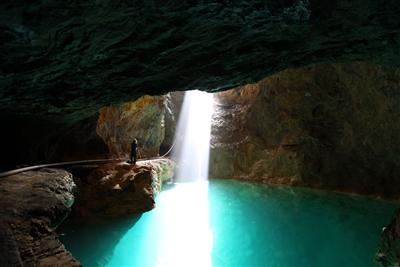 Folklore and superstition are well ingrained in Welsh history, so you’re bound to get a few ghost stories with something as creepy as an abandoned iron mine and a horrific suicide in a caretaker’s cottage. It practically writes itself. The suicide in question supposedly happened in 1930 when a one-armed mine worker killed himself in the cottage, leaving his ghost to haunt the grounds for all time. The cottage itself is still standing, hidden in the hills and covered with ivy, and you can visit it via a short hike near Garth Mountain.

But underneath the cottage is the mine itself: Miles and miles of abandoned tunnel, a vast subterranean maze where centuries of men worked and died in harsh conditions. Although it’s been abandoned for decades, the machinery is still down there, including a blacksmith shop and an entire steam plant, not to mention countless rusted rail spikes just waiting to reach up and give you a hug and a puncture wound. Many of the tunnels and caverns have filled in with water over the years, creating surprisingly beautiful underground lakes. 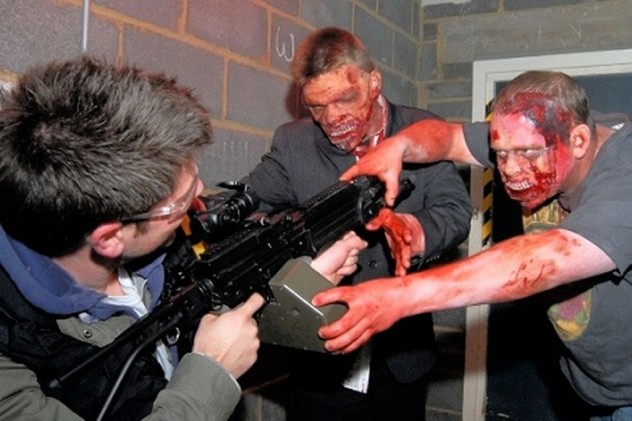 There’s no denying the post-apocalyptic atmosphere that goes hand-in-hand with an abandoned building, but while that comes standard with most rotting architecture, the owners of Friar’s Walk Shopping Center actively encourage it, in the form of zombie-themed warfare. For the past year, the crumbling shopping mall has been the host of Dawn of the Dead-esque games played with Airsoft rifles—spring-powered guns that shoot plastic BBs.

The mall itself is unchanged. After all, the point is that it’s supposed to look like an abandoned mall. Plate-glass shop windows, dead escalators, even a tattered indoor playground—all add to the ambiance of the shopping center. When the lights go down, you really could believe that a zombie might jump out from behind a corner. 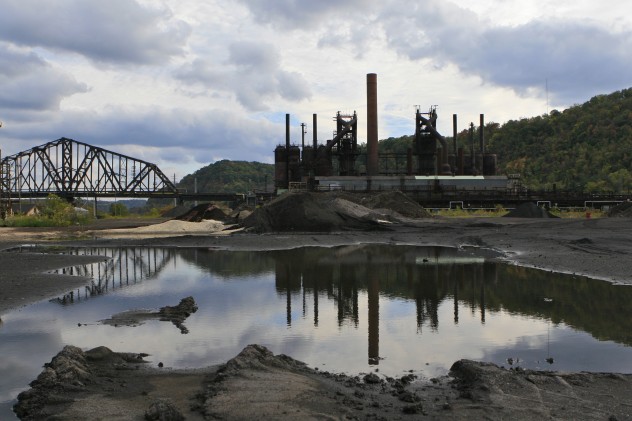 With a population of only about 3,500 people, the town of Mingo Junction, Ohio isn’t likely to win any awards for being interesting. But at one time, it was an important artery in the so-called Rust Belt that stretched across the central northeastern US. The town and the steel mill grew together—most of the families living in Mingo Junction were only there to work at the mill.

But in 2008, after several decades of slow decline, the Mingo Junction steel mill finally closed its doors, leaving behind a twisted framework, a rusted relic leftover from the industrial revolution. Its fate is still undecided, though it will probably end up being demolished to make room for restaurants and hotels along that stretch of the Ohio River. 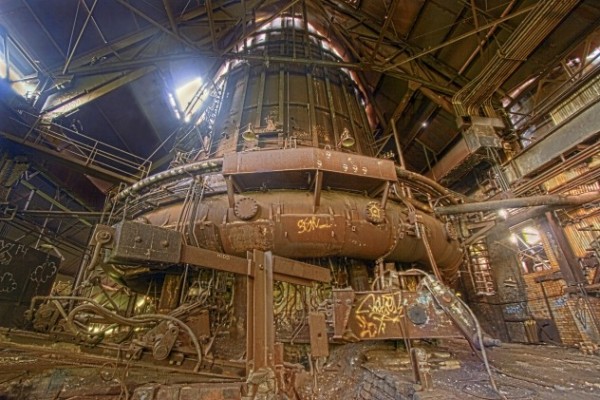 For some reason, when a factory or steel mill, closes most of the machinery is left inside, giving the unshakable sense that the whole thing could come alive again at any second. At least, that’s the impression you get from Carrie Furnace, another throwback to the Rust Belt days of the early 1900s. Located near Pittsburgh, Pennsylvania, the factory was built in 1884, and spit out roughly 1,000 tons of steel per day for nearly 100 years.

The 28-meter (92 ft) structure looms over the Monongahela River like a sleeping giant. Most of the original brickwork from 1907 is still intact, though covered in a blanket of ivy, and much of the machinery inside is practically antique. Two of the remaining blast furnaces were built before World War II and provided steel for the war.

In 2010, parts of the dilapidated steel mill were reopened for public tours. Extensive rebuilding allows visitors to walk on catwalks over two vintage blast furnaces capable of reaching 1,500 °C (2,800 °F). 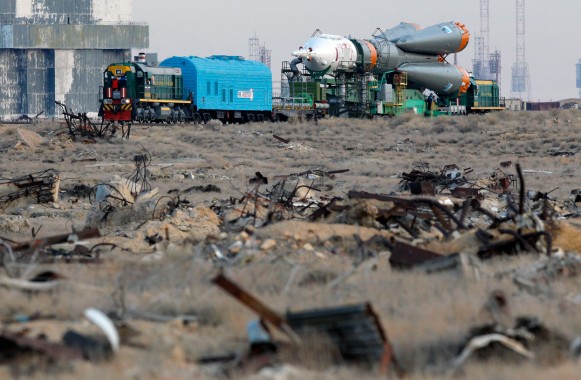 Fast-forward 68 years, and most of the facility is a ghost town. The towering, steel scaffolding rigs are nothing more than silent sentinels, keeping watch over launchpads packed with dust and scattered leaves. Control rooms that once buzzed with activity now sit in shadow, empty and silent. There’s even a space shuttle, just sitting there, like an old truck on cinder blocks in a redneck’s front lawn. Russia has been non-committal over their plans for the facility—although the land now belongs to Kazakhstan, the Russian government has a lease on the property until 2050. 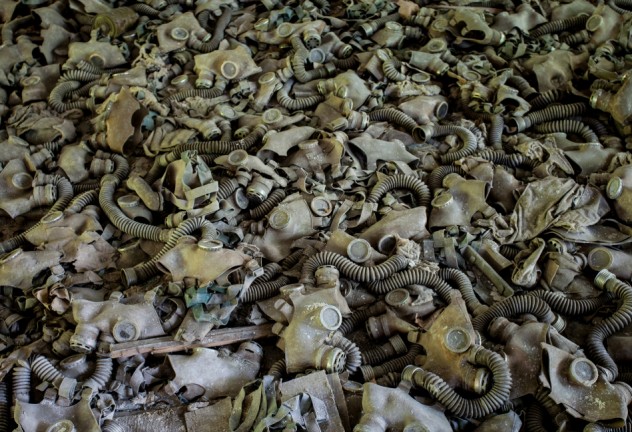 Following the meltdown of the Chernobyl Power Plant in 1986, the Ukraine government set up the Exclusion Zone, a quarantined area that extends 30 kilometers (19 mi) in every direction from the site of the reactor. Nearly 100,000 residents were evacuated from the Exclusion Zone, leaving behind their possessions, their homes, and, in many cases, their loved ones.

Now, most of the Exclusion Zone is still uninhabited, although all of the buildings are still standing. One of those buildings, known simply as Middle School Number Three, is almost frozen in time at the moment of the disaster: Gas masks cover the floors, and chairs and desks still stand exactly as they would have on a school day 27 years ago, except for a few that were knocked out of the way as the students fled. If you want, you can actually visit the area right now with a guided tour, although this tour has certain rules you don’t normally hear on vacation—like stay on the concrete walkways, because the radiation is lower there, and don’t touch literally anything.