Père Lachaise cemetery in Paris is probably one of the greatest collections of (dead) human talent in the world. Père Lachaise is claimed to be the most visited graveyard in the world, and with so many famous people interred there it may well be true. Posted at the entrances are maps pointing visitors towards the most famous graves, but on every path there are monuments which make you stop and stare. It might seem a bit of a macabre way to spend an afternoon, but because there are so many famous tombs, and such artistry in the graves, it becomes something like a visit to a museum. Here are ten of the most famous graves in Père Lachaise, and the traditions which they have inspired. 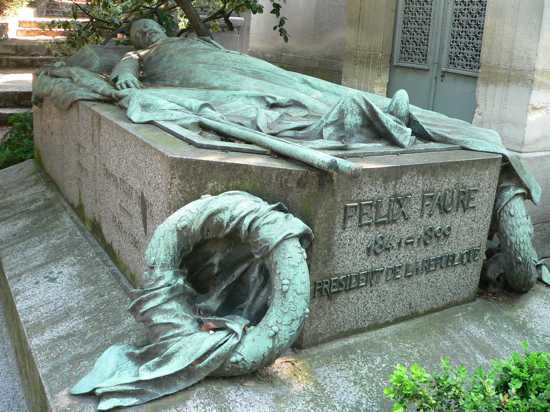 Félix Faure was president of France from 1895 until his death in 1899. His presidency is famous for the Franco-Russian alliance and the Dreyfus affair. It is his death, however, that has spread Faure’s name outside of France. Faure died after suffering an apoplectic episode whilst in bed with his mistress, Marguerite Steinheil, with rumors surfacing that he died while receiving oral sex from her. While the actual event is, of course, shrouded in gloom, it has become an infamous example of political scandal. His tomb shows him draped in cloth (the flag?), though some have seen it as him reclining in his death bed. George Clemenceau gave Faure the epitaph ‘Il voulait être Céwar, il ne fut sue Pompée.’ You can translate that as either ‘He wanted to be Caesar, he ended being Pompey’ or ‘He wanted to be Caesar, he ended being pumped.’ 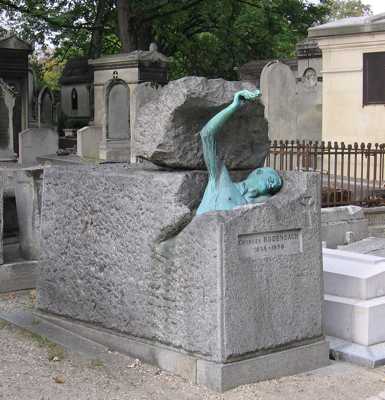 Georges Rodenbach, Belgian writer and poet of the 19th century, is perhaps most famous today for his novel Bruges-la-Morte. This work was later turned into the opera Die Tote Stadt. When I visited Père Lachaise I had never heard of Rodenbach, but his tomb inspired me to find out about this man. His tomb shows a bronze figure breaking out of the grave. If death cannot stop him, I thought, perhaps he deserves some attention. I confess it is still his tomb I think of when I read the name Rodenbach. 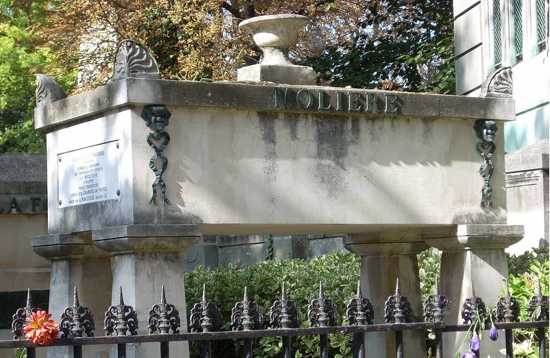 Jean-Baptiste Poquelin, better known as Molière, was one of the greatest comic playwrights of all time. Like Felix Faure, many people who have not seen a Molière play know the story of his death. Molière suffered for many years from TB. Despite his illness, Molière insisted on performing in his play Le Malade Imaginaire (Also known as The Hypochondriac). In this play a man suffers terribly from illnesses he does not have. Molière, on the other hand, was suffering terribly from a real illness. While playing the part of the hypochondriac, he succumbed to a coughing fit, and died later at home. Since Molière was an actor, he was not allowed to be buried in consecrated ground, and only the intervention of the king allowed him burial amongst the unbaptized infants. His remains were transferred in 1817 to this tomb in Père Lachaise. 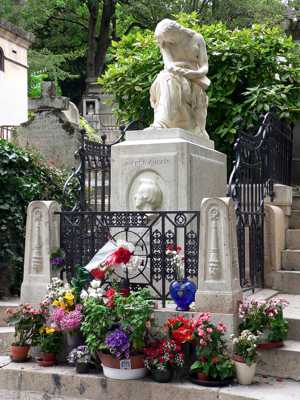 Chopin is the master of the solo piano. His work still dazzles audiences today, and is the bane of anyone learning to play the piano. Chopin grew up in Warsaw but settled in France in later life. It was in Paris that Chopin died, after a long battle with lung disease. His body was buried in Père Lachaise, though his heart was removed for burial in his homeland. His grave is usually adorned with many bunches of flowers, and is notable for the statue surmounting it – the muse of music, Euterpe, weeps as she contemplates a broken lyre. 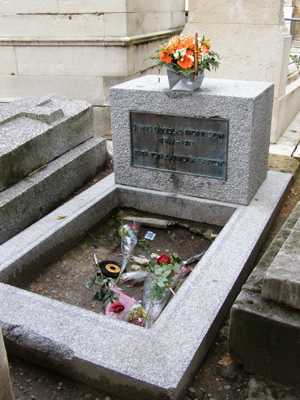 Morrison, lead singer of The Doors, has a remarkably simple tomb, but it is one of the most popular in the cemetery. After Morrison died in 1971, of a suspected drug overdose in Paris, he was buried in an unmarked grave in Père Lachaise. When the cemetery placed a simple marker on the site it was stolen. The same thing happened to a bust of Morrison placed on a simple gravestone. Many visitors leave gifts on Morrison’s grave, but many also write poems or other messages around the gravestone. In 2008, it was reported that the cemetery had hired a guard to ensure that visitors to Morrison’s grave did no more damage to it or other tombs. Now a simple block of stone bears the message, in Greek, ‘According to his own daimon.’ 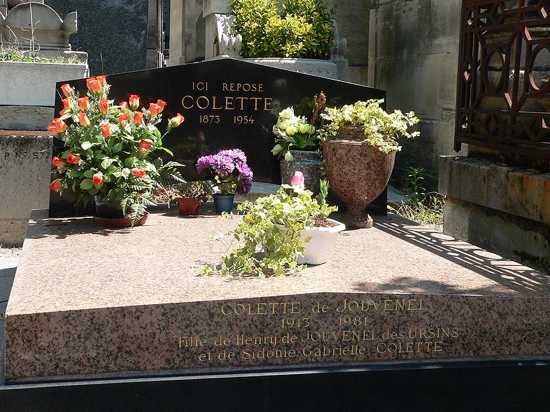 Sidonie-Gabrielle Colette, known simply as Colette, was best known for her novel Gigi, her other writings, and her unorthodox love life. She was the first woman in France to receive a state funeral. Her grave is always decorated with flowers. While I was in the cemetery, I was told by a local that this is because the cats which lurk behind all the tombs replace the flowers on her grave daily. I cannot speak to the validity of this claim, but I was certainly unnerved to be trailed by a black cat for the duration of my visit. 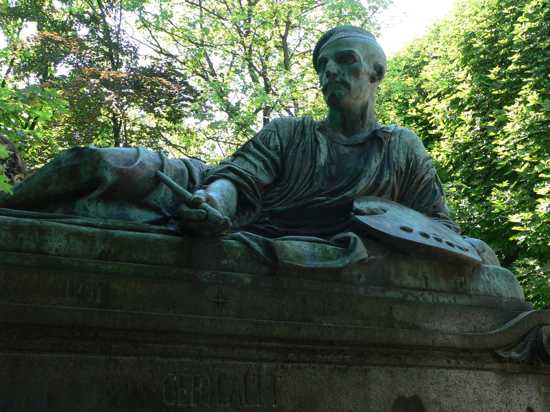 Géricault lived for only thirty-two years, but he left behind a body of famous paintings which influenced the Romantic Movement. His ‘Raft of the Medusa’ is one of the most visited paintings in the Louvre. I included Géricault in a previous list for his somewhat chilling painting of severed heads. His tomb in Père Lachaise is a masterpiece all of its own. The monument is topped by a reclining bronze of Géricault with his paint brush and palette. The statue shows Géricault as vital and alive, and not the thin specter that the TB which killed him had turned him into. On the side of the tomb there is a bronze version of The Raft of the Medusa, so that everyone passing may see his genius. 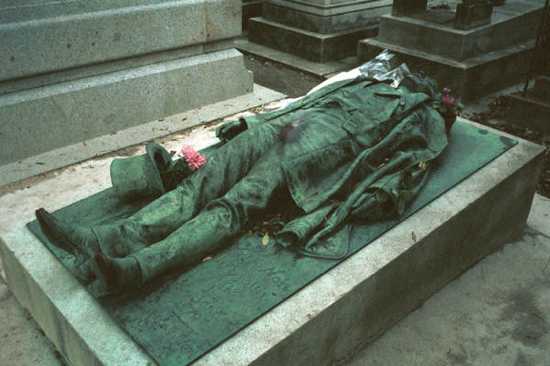 Victor Noir is more famous for his death and his grave than for his life. Noir was born Yvan Salmon, but adopted a pen name when he moved to Paris to take up journalism. When a cousin of the Emperor challenged the owner of the newspaper for which Noir worked to a duel, Noir was sent, as one of the seconds, to arrange the details of the duel. When the Prince referred to Noir and a companion as ‘menials’, a slap was exchanged, with either Noir striking the Prince or being struck by him, and the Prince then shot Noir dead. To mark Noir’s grave, a bronze statue of the man lying supine as if just shot, his hat lying beside him, was erected. This statue has since become something of a fertility symbol. Due to the naturalistic style of the sculpture there is a rather prominent fold in Noir’s trousers which make him appear to be aroused. It is said that by rubbing this area and leaving a flower in Noir’s hat, a woman is guaranteed a husband within the year. While the rest of the statue is covered with verdigris, Noir’s crotch gleams, proving the popularity of this particular myth. 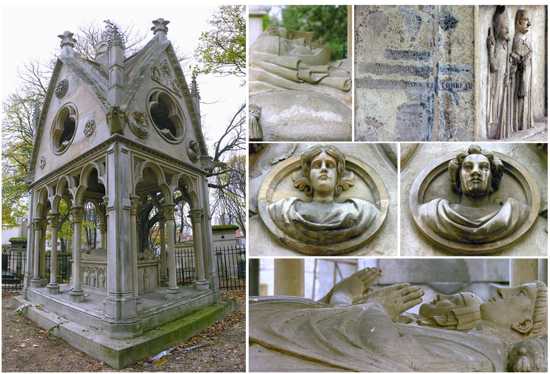 The story of the love between Abelard and Heloise was one of the best known romances of the middle ages. Abelard was one of the great French philosophers and logicians of his day. Being one of the great teachers of the time, he was hired to teach Heloise, a rich young noble woman. Heloise and Abelard started an affair which led to an illegitimate child and a secret marriage. When Heloise’s uncle found out about the affair, he had Heloise placed in a nunnery and Abelard was castrated. The letters the two sent to each other over the course of the rest of their lives are – justly – famous. The bones of the two lovers were buried together under a grand tomb in 1817. A tradition of modern lovers leaving letters at the tomb of these two great, though doomed, lovers has arisen. 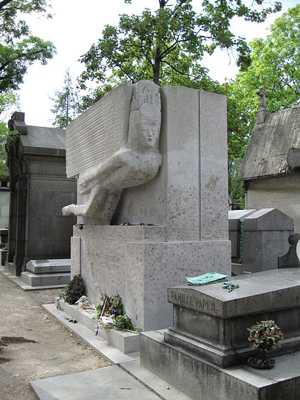 Wilde’s is probably the most famous tomb in Père Lachaise. Wilde died in France after leaving England to avoid the shame of his conviction for ‘gross indecency.’ His legendary wit is said to have extended to his death bed, where he is supposed to have quipped – ‘My wallpaper and I are fighting a duel to the death. One or other of us has to go.’ (Though this is probably apocryphal.) Wilde’s tomb, with an angel displaying its genitalia, was defaced soon after its erection. Today the monument stands covered in lipstick where women kiss the stone, proving the grave’s popularity. Engraved on the tomb is a verse from the Ballad of Reading Gaol by Wilde:

And alien tears will fill for him
Pity’s long-broken urn,
For his mourners will be outcast men,
And outcasts always mourn.