Zoos are awesome places where we get the unique opportunity to observe different animals—from the small and mild to the big and wild. As you might expect, some people have abused the privilege of caring for these poor animals, and in the guise of aiding animal conservation and observation, we sometimes act a little more cruelly than necessary—something which we wouldn’t dare to do if the bars were taken away. In any case, zoos are often a lot more bizarre than we give them credit for. 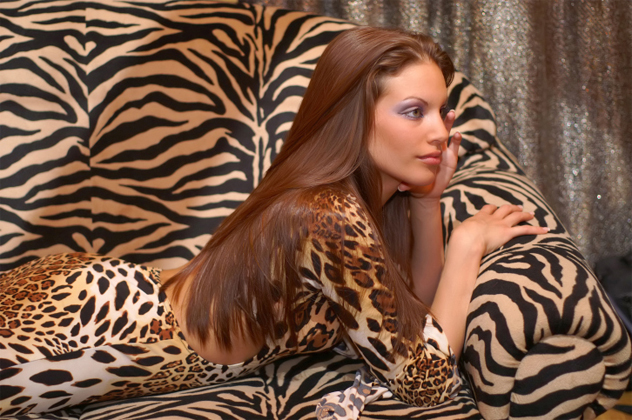 While animal-themed clothes are pretty much allowed in most zoos across the world, they are banned at the Chessington World of Adventures in the United Kingdom. The ban came into place after zoo authorities noticed that the animals in their Zufari—an imitation of an African wildlife safari—moved closer to people wearing clothing similar to their respective patterns and coloring, while they ran away from people who wore clothes that resembled their predators.

Banned prints include those resembling the coats of zebras, giraffes, leopards, hyenas, cheetahs, tigers, and African wild dogs. Visitors caught decked in any of these prints on zoo grounds are given two options—either accept a zoo-owned gray jumpsuit, or leave. 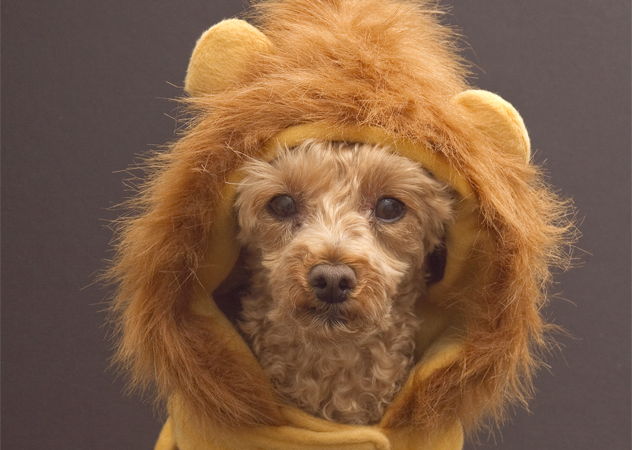 The Chinese are well known for making substandard and unauthorized versions of almost anything. From popular high-end gadgets and electronics to clothing and food, they’ve done it all. And in the past, that’s also extended to knock-off versions of animals. A zoo in Henan Province, China, once tried pulling a fast one on visitors by displaying fake animals. The animals displayed included a Tibetan mastiff posed as an African lion, giant sea cucumbers and rats posed as snakes, and dogs dressed up as leopards and timber wolves. Things turned awry when the “African lion” began barking.

In an effort to save face, the zoo’s animal department chief claimed the real lion had been temporarily sent to a breeding facility (although he failed to explain what the mastiff was doing in its cage). The claim was supported by another zoo official who even added that the timber wolf was actually in its pen, and the mongrel dog seen there was its pet. 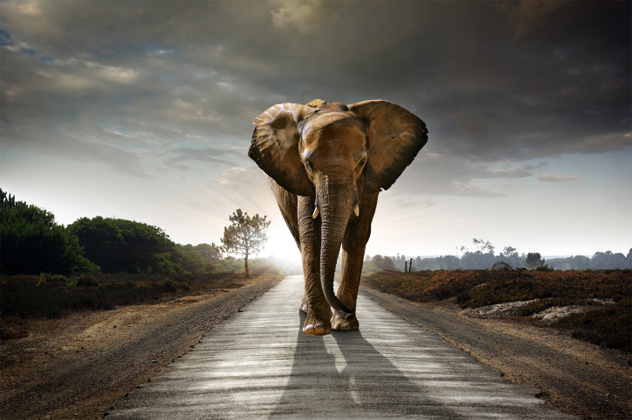 Compared with those in the wild, animals in zoos have a decidedly longer lifespan. This is because in zoos, the animals have access to better food, veterinary care, and shelter, and mostly just because they don’t have to worry about another animal gobbling them up. But strangely, the reverse is the case for elephants—wild elephants live longer than elephants in zoos. Zoo-born African and Asian elephants live for only 17 and 19 years respectively. Compare that to the average 56 years enjoyed by those in the wild, and you’re looking at a huge difference.

The whole thing becomes even more puzzling by the fact that elephants captured in the wild and taken to zoos also live longer than those born in captivity. It is believed that something bizarre is happening to the elephants very early in their lifetime (between the ages of three and four), and stress, obesity, and lack of exercise have been suggested as possible factors. 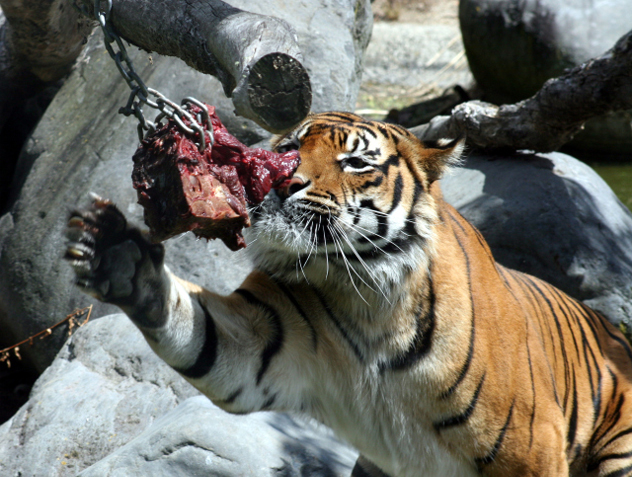 Just as we humans get kidnapped, animals are also commonly the victims of “cubnapping.” The targets are usually small animals or babies of bigger animals as they are usually less aggressive than their adult counterparts. The kidnapping process generally involves smashing or jumping into tanks and cages to abduct these animals, but in some instances, things have gotten a bit more serious. At the Gaza Zoo in the Gaza Strip, four masked men armed with Kalashnikovs made away with a four-month-old lion cub and two Arabic-speaking parrots.

And speaking of large animals, a Bengal tiger and two camels were once stolen as they were being transported to the Bowmanville Zoo in Ontario, Canada. 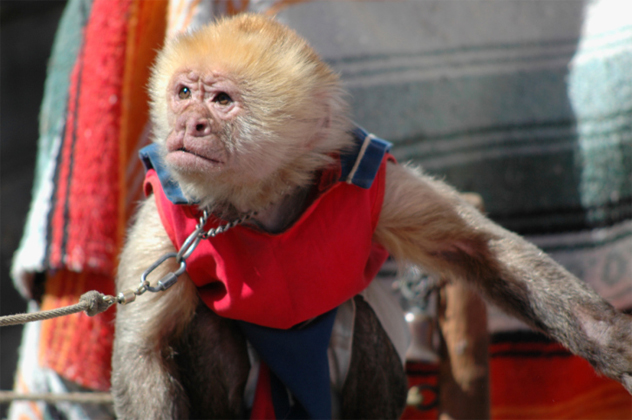 In a bid to attract visitors and increase profits, Chinese zoos have turned to doing some insane things, up to and including using animals for circus-like performances. Wild animals are made to perform unnatural acts like riding bicycles, tricycles, and horses. They are also made to jump through burning hoops, balance on balls, and, in one instance, a goat was made to walk on a tight rope with a small monkey on its back.

Bear cubs have even been forced to box each other for the amusement of a cheering crowd. As expected, the animals are not always cooperative, so to make them participate, zoo officials often employ different “training” methods—which have included beatings and prodding with metal hooks. Big cats like lions and tigers also get de-fanged. 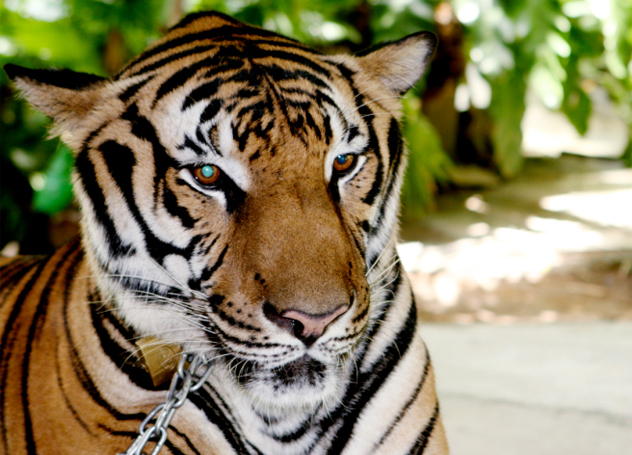 Private zoos can range from being simple backyard enclosures to massive sprawling ranches, owned by either individuals or organizations. Sometimes they’re legal, and sometimes they’re not. While many private zoo owners have caused problems at one time or the other (like the Vietnam veteran who released the exotic animals in his Ohio zoo before committing suicide), drug lords, who keep these zoos as a show of wealth and power, have taken the private zoo business to a whole different level.

There are so many illegal zoos owned by drug lords that in July 2011 alone, 5,500 animals were seized from gangs operating in Mexico. These wild animals are often used for brutal purposes, such as execution—the Mexican Zetas gang (a cabal made up of former military commandos) has been known to feed their enemies to tigers. In other cases, the animals are used as drug couriers—a process which involves the animal’s body getting surgically opened and stuffed with cocaine-filled condoms before being sewed shut again. 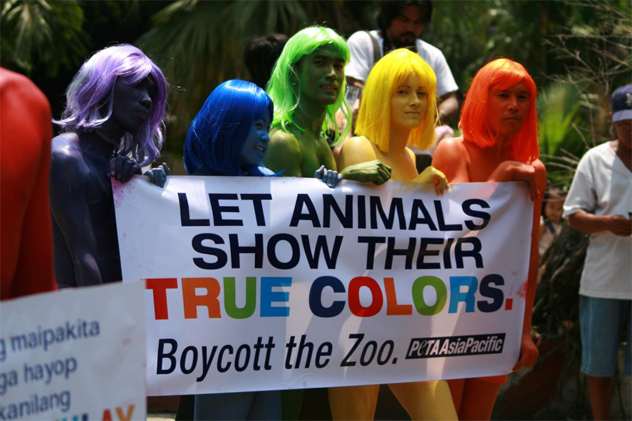 Anti-zoo movements are organizations made up of animal rights activists who are against the keeping of animals in zoos. While zoos insist they are only helping the conservation process, anti-zoo organizations say otherwise. They insist that if zoos were really interested in conserving animals, they would conserve them in their natural habitats and not in artificial, stressful, and boring (for the animals) conditions which deprive them of physical and mental stimulation. They believe zoos are simply profit-driven businesses which play on the emotions of their visitors through such nefarious plots as displaying cute animal babies to drive up ticket sales.

Tatiana was a female tiger that went berserk at the San Francisco Zoo on Christmas day in 2007. The four-year-old Siberian tiger—which was later put down—injured a man named Kulbir Dhaliwal, killed 17-year-old Carlos Souza Jr., then followed Kulbir’s blood trail to a zoo cafe, where she tried to finish the job on Kulbir and his brother. By the time police arrived, the cat, which weighed 136 kilos (300 lbs), was found sitting beside one of the brothers. When he called for help, she proceeded to attack him again. While the attack itself wasn’t surprising (since that’s what wild animals are known for), how and why Tatiana escaped from her enclosure was.

San Francisco Zoo authorities initially claimed Tatiana’s exhibit wall was 5.5 meters (18 ft) high, but they later confessed that it was only 3.8 meters (12.5 ft) high. Still, 3.8 meters is pretty high, so the fact that Tatiana still managed to jump out is pretty amazing. It’s been speculated (though not proven) that the three men she attacked had been taunting her before she escaped. A tiger can only take so much. 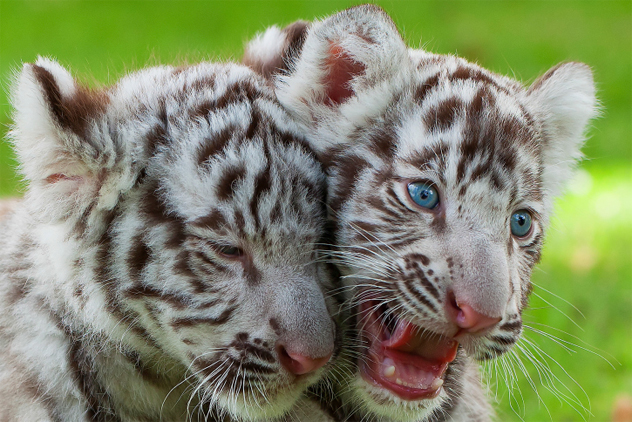 Animals don’t always get along well with each other, especially if at least one of them is a carnivore. But at the Garold Wayne Interactive Zoological Park in Wynnewood, Oklahoma, a baby chimp, a baby wolf, and two baby tigers have bonded together and become inseparable. But since they’re cubs, it’s only a matter of time until they outgrow their childish fondness and become mortal enemies, right?

Enter another unlikely animal trio: Baloo the bear, Shere Khan the tiger, and Leo the lion. The trio were rescued during a drug raid in Atlanta, Georgia, in 2001 when they were barely three months old. Today, they’re fully grown adults, with Baloo tipping the scales at 450 kilos (1,000 lbs) and Leo and Shere Khan each coming in at 159 kilos (350 lbs). The three animals all live in the same enclosure at the Noah’s Ark Animal Rescue Center in Locust Grove, Georgia, and are the best of friends. They not only eat and sleep together, but also hug, wrestle, frolic, and do all the things normally reserved for a box full of kittens. 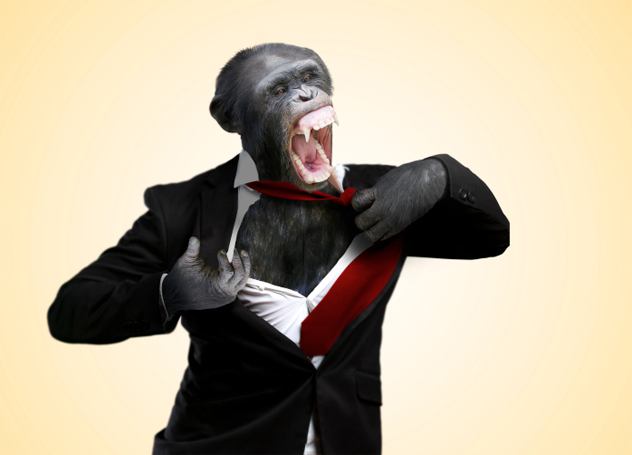 Zoochosis is a portmanteau of zoo and psychosis. It was coined by the late Bill Travers of Born Free Foundation, which is an anti-zoo organization. It refers to abnormal, repetitive, and unnatural behaviors—the equivalent of madness in humans—exhibited by animals in captivity. It is caused by several factors, including the separation of an animal from its natural habitat, loss of life in social groups, idleness, use of drugs and medication (including birth control), caging, and human influence in general. Zoochosis symptoms have never been observed in animals in the wild.

One symptom is the repeated biting and sucking of cage bars, an act which leads to tooth damage and is often displayed by captive bears. The licking of cage walls, bars, or gates is another symptom; it’s known as “tongue playing” and displayed by giraffes and camels. Other symptoms include walking back and forth along a well-defined route, vomiting, limb biting, regurgitation, excrement eating, and, in primates, hugging their knees while rocking back and forth. This last one is particularly shocking because it’s also a symptom of madness and distress in humans.