Dinosaurs are a pop culture favorite and it’s easy to see why. They waged epic battles with horns, teeth, and claws more terrifying than any weapon. They looked wilder and sometimes wackier than any beast dreamed up in any fiction. And they were all real. But we’ve had the misfortune (or maybe fortune) of missing them by about 65 million years. So we only see the real dinosaurs in glimpses. Glimpses that are sometimes so weird or obscure that they don’t make it into the pop culture depiction of prehistoric life.

10 Dinosaurs were covered in dandruff

The Middle Jurassic period experienced a proliferation of feathered dinosaurs, whose successors gradually transformed into birds. When feathers evolved, so did dandruff, and fossil feathers are riddled with skin flakes. Modern birds also flake, but bird flakes are fat-laden and act as a biological cooling system that traps and dissipates heat during flight.

The dinosaurian dandruff is similar to that of birds and humans. It’s composed of keratin, the sturdy, fibrous protein makes hair, horns, and hooves. But the dino-dandruff is devoid of fat, an indicator that its owners weren’t yet capable of flight. And so dandruff has become an unlikely ally that reveals which prehistoric creatures could take to the skies.[1] 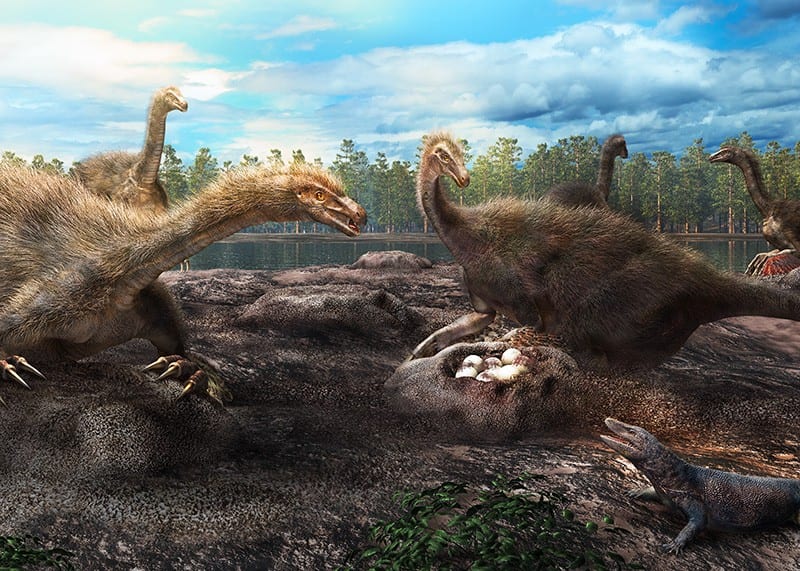 Dinosaurs don’t get much credit for sociability. But picture this: colonies of nesting dinosaurs, working together to guard their unhatched babies, just like the birds they would later become.

That touching picture is painted by an 80 million-year-old collection of clutches found in the Gobi desert. The discovery contained 15 clutches totaling at least 50 eggs. The long-ago flood that so fortuitously preserved them also left another souvenir, a continuous red streak of sediment across the eggs, dating them to the same nesting period.

The theropods (raptor-like dinosaurs) responsible were displaying a birthing behavior popular among today’s birds and crocodiles. But the dinosaurs were doing it before the evolutionary split (aided by an asteroid) that produced birds.

Overall, communal parenting apparently worked about as well then as it does now. More than half the nests showed signs of at least one successful hatch, on par with crocodilian and avian success rates.[2]

8 The goofiest dinosaurs were also the toughest 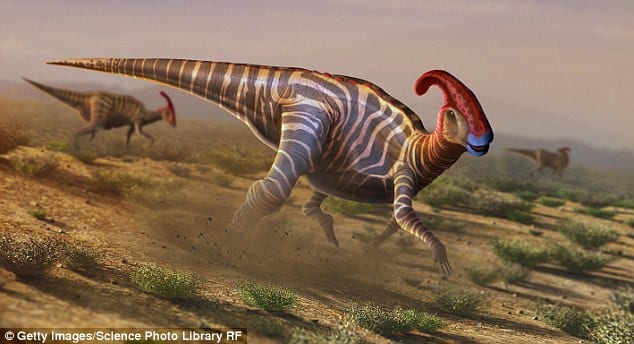 The duck-billed, crest-headed, hump-backed herbivores known as hadrosaurs are vastly over-represented among fossils that retain skin. Hadrosaur skin (actually the fossilized impression of it) is preserved more often and in greater abundance than any other skin.

Two reasons were offered. Maybe hadrosaurs lived and died near rivers, where they were likelier to get covered in sediment and become fossils. Or maybe they were simply more plentiful. But hadrosaurs are found all over the place. And an abundance of skin-retaining hadrosaur fossils are found even when they’re outnumbered by other species.

So researchers offered a new explanation: hadrosaurs had the hardest skin of all. One study analyzed nearly 200 reports spanning the 1840s through 2010. It found that of the 123 dinosaur body fossils that retained some skin, almost half (57) belonged to hadrosaurids.

Another study focused on fossils found at the Hell Creek Formation. Of the 22 dinosaur fossils that showed skin, 20 of those were of hadrosaurian kin. Of all the specimens studied, one even held “enough skin to wrap around a car.”[3]

7 T-Rexes were too slow to chase you down 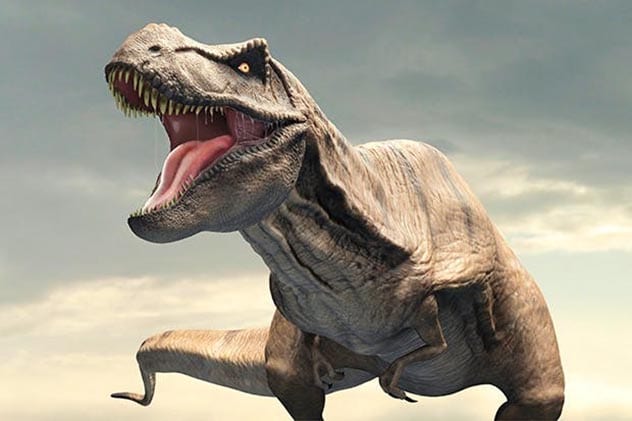 With its supposed Olympic sprinter-level speed, the T-Rex could out-run and brutalize just about any creature. Except a (slightly) above average human runner, that is.

Researchers studied more than 500 species, including whales, to determine how size relates to speed. The biological limiting factor is oxygen, or more specifically, the lack of it. Sprinting is anaerobic exercise and oxidation of fuel sources can’t occur fast enough to sustain it for long. And larger animals exhaust their fuel-oxidizing capacities even faster.

So while previous science credited Tyrannosaurus with a terrifying 45 mph top speed, its prodigious size would have actually limited it to a trot, at best. Its new, more accurate top speed? A modest 16.5 miles per hour. Not so scary, considering an average human can hit sprint speeds of 15 mph.[4]

6 Some dinosaurs were unbelievably small 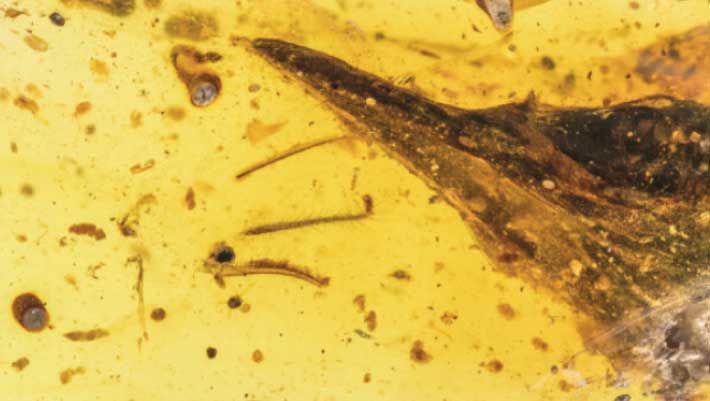 Some of the most amazing dinosaurs were also the smallest. One such creature, recently found in a 99-million-year-old Mesozoic fossil from Myanmar, could be the tiniest dinosaur ever.

It’s a little teacup dinosaur named Oculudentavis khaungraae. And scientists have so far only found its decapitated head, preserved in resin. But what a head: it’s only half-an-inch-long and hummingbird-like, though smaller than any modern h-bird.

And it’s teetering on the threshold between the saurian past and the avian future. It has lizard eyes, suggesting it was active during the day. But it also has a mouthful of teeth, like a dinosaur. The mix of features makes this minuscule bird-o-saur one of the missing links that connects dinosaurs and birds.

Khaungraae also exemplifies how dinosaurs managed to survive for more than 150 million years. They employed every adaptational strategy, like growing tiny and taking advantage of resources shunned by its gigantic brethren.[5]

5 Dinosaurs were plagued by feather-eating parasites 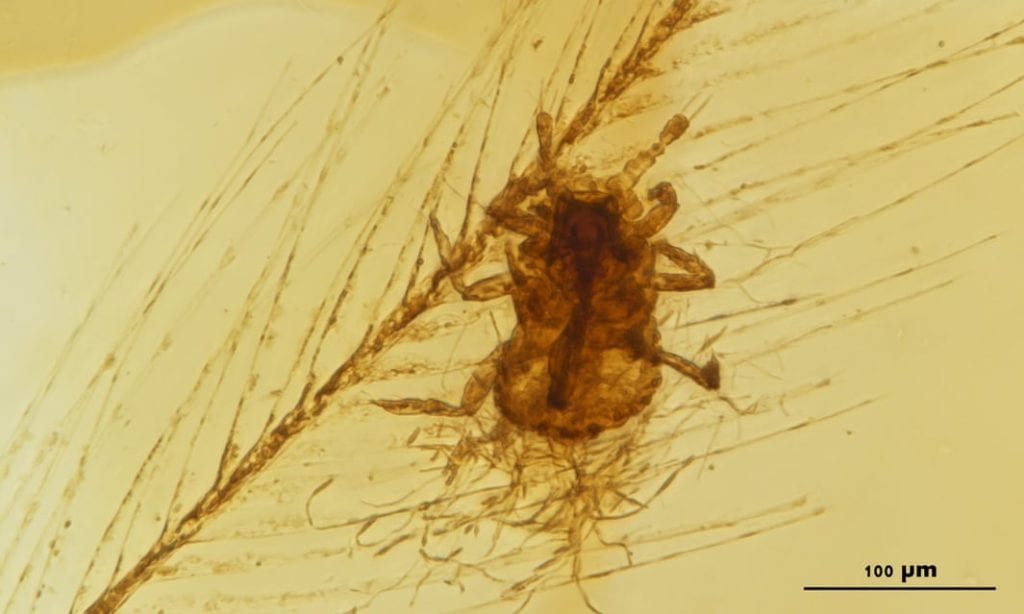 Feathered dinosaurs may have been continuously preening themselves, like birds, to rid themselves of an infestation of feather-eating parasites.

It’s a tale as old as time: as soon as a niche opens up, evolution creates some new thing to fill it. Often times at another thing’s expense. And when dinosaurs sprouted feathers, they soon became blighted by lice-like bugs that fed on those feathers.

These bugs are so tiny and fragile that they very rarely fossilize. Out of thousands of amber samples, researchers only recently found the lice, locked in 100-million-year-old Burmese amber.

Inside the amber were two dinosaur feathers. And they appeared to be chewed on. Looking closer, researchers found 10 prehistoric bugs and named them Mesophthirus engeli. The Mesozoic feather-munchers only about two human hair-widths-long, probably because they were babies aka nymphs. But the adults wouldn’t have grown much larger, maybe just .02 inches in length.[6]

4 Dinosaurs didn’t inhabit every part of the Earth

Only a select, small, meat-eating contingent was able to inhabit the lower latitudes. Researchers mapped the ancient ecosystem by looking at carbon levels in the soil and plants, diversity of flora, charcoal, and fossil records.

It turns out that the equator was hell on Earth. Wild climate swings raged back and forth, stripping away moisture and transforming fertile climes into arid wastelands. The intense heat caused droughts and furious wildfires. Fires picked the land clean, damaged the soil, and increased erosion, leaving no vegetation for the huge, herbivorous, long-necked sauropods which dominated other latitudes.

This vision of the past could be a vision of the future. Atmospheric CO2 levels were up to six times higher than today. And mid-world latitudes resembled the parched, sun-baked western US. With this dearth of resources, only the smallest and thriftiest dinosaurs could survive near the equator.[7] 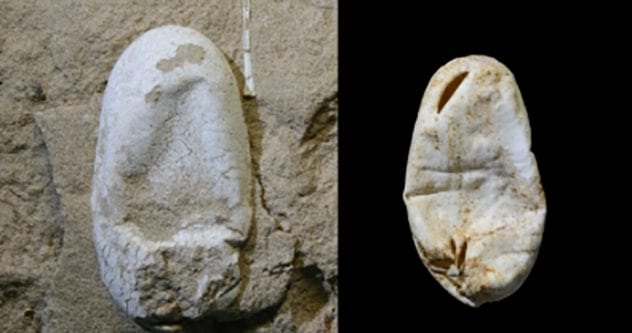 For a while, all recovered dinosaur eggs were of the hard-shelled variety. But that’s only because they were likelier to survive. It turns out that dinosaurs started out laying soft, squishy eggs.

And it wasn’t just a few species that laid soft-shelled eggs. Molecular analysis tells us that all early dinosaur eggs were non-mineralized. Instead, the little embryos within were wrapped up in a leathery covering, like today’s turtle and snake eggs. To ensure their babies survived, dinosaurs buried their clutches and left them to incubate underground.

But evolution eventually and randomly added calcium into the mix. Calcification made the eggs tougher and hard-shelled, less like reptilian eggs and more like bird eggs. And evolution favors re-using proven designs. So the hard-to-soft-shell shift occurred independently for each of the main three branches of dinosaurs: Ornithischia (Triceratops, Stegosaurus), Sauropodomorpha (Brontosaurus), and Theropoda (T-Rex, raptors).[8] 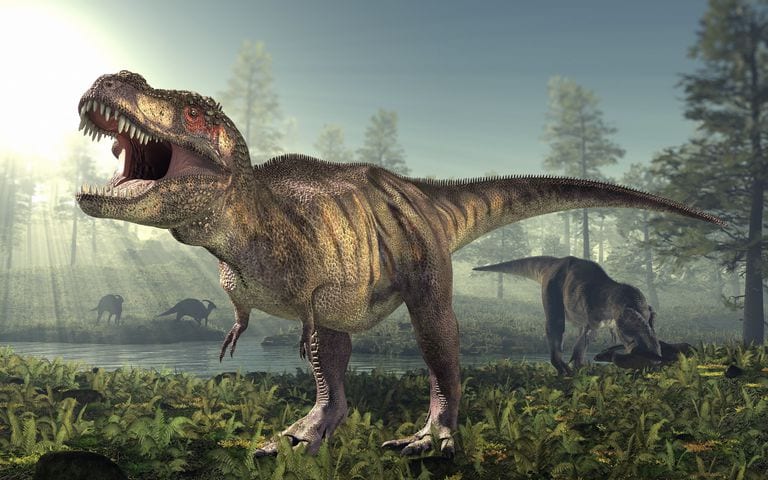 Just about every image of a snarling, tongue-waving T-Rex is wrong. The tyrant king actually had a crocodilian tongue that was stuck to the bottom of its mouth.

So reveals a mass-comparison of tongues. Including those from dinosaurs, the related pterosaurs (flying reptiles), and, for perspective, tongues from “modern dinosaurians” like crocodiles and birds. The animals that could move their tongues had a distinctively-shaped, longer hyoids (a bone that connects to the tongue). Evolutionarily-similar pterosaurs and raptors had hyoids that allowed tongue freedom. As do modern birds.

But most dinosaurs had short hyoids and chunks of cartilage to anchor the tongue (like alligators), suggesting that dinosaur tongues were anchored to the floor of their mouths. But tongue mobility isn’t necessary for creatures like gators and T-Rexes, who had no time or need to chew as they ripped and swallowed chunks from their prey.

One major branch (out of three) of dinosaurs did enjoy extended tongue mobility, though: the bird-hipped, plant-eating Ornithischia group. This group included the Triceratops and other horned, armored dinos that chewed on rough, fibrous plants all day.[9] 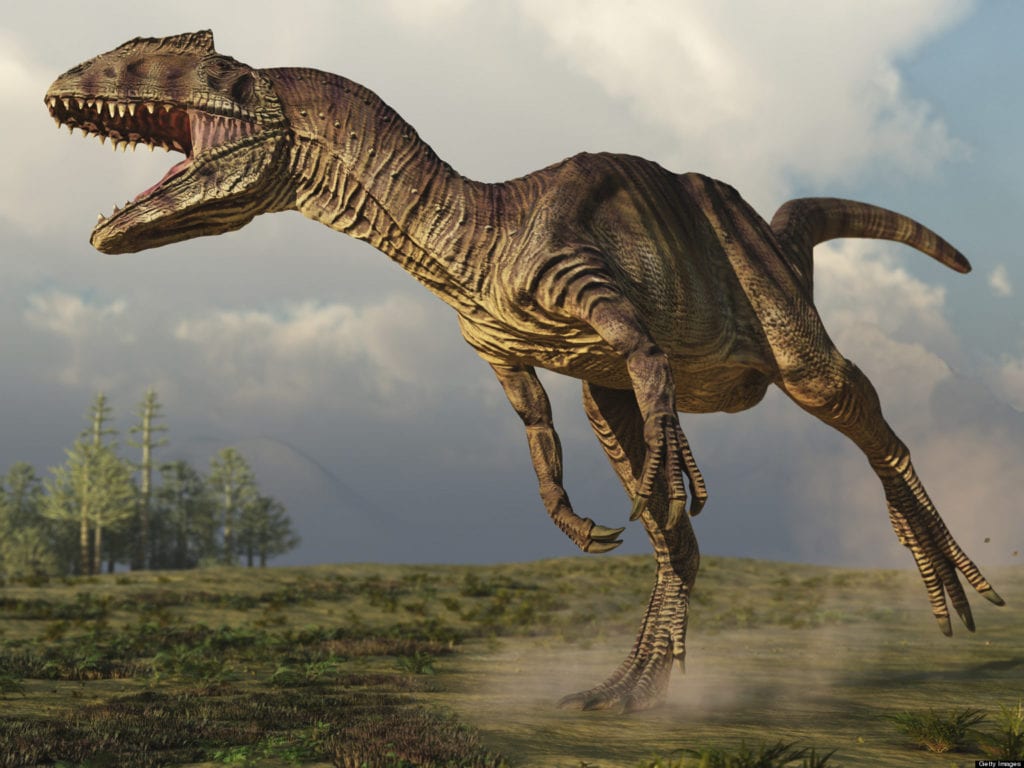 The Allosaurus, a smaller but equally ferocious variant of the Tyrannosaurus rex, was a hell-raising, assault-minded carnivore. But Allosaurus and his larger cousin weren’t always predators. Sometimes, they were forced to scavenge.

The evidence for Allosaurus’ less-than-dignified eating habits comes from a treasure trove of 150-million-year-old fossil bones at the Mygatt-Moore Quarry in Colorado.

Out of the 2,368 bones found at the quarry, about 700 displayed the serrated tooth-marks of Allosaurus. Many of the bite-marked bones belonged to herbivores, but about 17 percent belonged to other Allosaurus. And the bite marks were found on the least-nutritious parts of the body, like the feet. These would be the last parts to be eaten and therefore left over for the scavengers.

When times were tough and food supplies low, Allosaurus would pick at the feet and trash parts of its fallen brethren. These carcasses would have piled up in Colorado’s finicky ancient ecosystem, prone to dry spells.[10]