Usually, when animal stories headline the news, it’s either a feel-good report or something relating to PETA. We’ve all probably seen the videos of first responders risking life and limb to save that little fluffy kitten or treasured family dog from a fire or a flooding storm drain. And you’ve watched as people rush to the shores to protect and save a beached sea creature, pouring buckets and buckets on water on it until help arrives.

In the following stories, however, these animals were featured in the headlines for various other, often bizarre reasons. 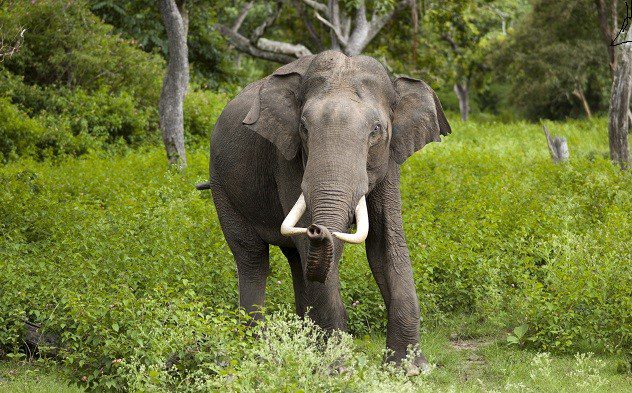 In June 2022, it was widely reported that a 70-year-old woman named Maya Murmu had been attacked and trampled by a wild elephant while she was collecting water in the Mayurbhanj district in eastern India. The elephant had wandered away from the Dalma Wildlife Sanctuary when the woman appeared in its line of sight.

While elephant attacks are nothing new, what happened after the woman succumbed to her injuries, certainly is. As Murmu’s family members gathered for a funeral service, the elephant returned. It spotted Murmu’s body on the funeral pyre and rushed forward, trampling it. The elephant eventually tossed the body to one side and stormed off.

While it remains unclear what or who provoked the animal, it is clear that something must have done so. Theories have been presented that state the woman may have assisted poachers in killing the elephant’s baby in full view of said elephant, but this has yet to be confirmed.[1]

9 Something in Your Throat?

Angler ‘kissed’ fish that ‘swam down his throat’ – Rebecca Williams

A 28-year-old man in Bournemouth was out fishing in 2017 when he caught a Dover sole. Bending over to kiss the fish, it jumped out of his hand and into his mouth. Unfortunately, the fish got stuck in the man’s windpipe, causing him to stop breathing. By the time paramedics got to the scene, the man was in full cardiac arrest. Working fast, the paramedics used forceps to pull the 5.5-inch (14-centimeter) fish from the man’s throat.

Luckily, he made a full recovery. There was no word on the fish’s condition.

In May 2022, a man was spearfishing in Phatthalung province in Thailand and had just come up for air when a fish leaped into his open mouth at the same time. The spike freshwater fish, known as an Anabas, wiggled itself down the man’s windpipe, blocking his airway. The man was rushed to the hospital after people on the shore saw he was in trouble. Doctors successfully extracted the fish, which had apparently been trying to escape through the man’s nasal cavity.

This fisherman, too, made a full recovery. The fish, not so much.[2]

8 Anything for 15 Minutes of Fame

In March 2022, moviegoers inside the Moviehouse & Eatery by Cinépolis in Austin were settling in and getting ready to watch the featured film while munching on oversized buckets of popcorn.

Unfortunately, one of the moviegoers wanted his own fifteen minutes of fame and decided to release a live bat inside the theater. Chaos erupted, animal control was contacted, and refunds were offered. Most people opted to stay and finish watching the movie. The director of marketing and communications at Cinépolis promised to add extra security measures, which would include checking bags before entry.[3]

At least the animal was relevant—they were there to see The Batman after all.

Speeding Javelina Captures Our Hearts | All In | MSNBC

A deer in India wasn’t about to let something as trivial as a dirt road stand in its way. And it wasn’t about to get its hooves dirty either. So in a gravity-defying stunt, with onlookers gasping in surprise, the deer leaped across the road and appeared to be gliding through the air at an incredible height before landing safely on the other side.

And this deer isn’t the only animal to potentially star in the Olympics either. In 2020, a javelina was captured on video trying to outrun an unseen competitor down a street in Tucson, Arizona. It’s truly a moment that must be seen to be appreciated.[4]

Cows are docile creatures, but sometimes they, too, just want to break free and have a little fun. Especially if they’re destined for the slaughterhouse. In November 2021, a cow broke free from a cattle ranch 500 miles west of Rio de Janeiro and set off straight toward a… water park.

Once the cow arrived at the nearby resort, it made its way to the edge of a pool-side waterslide and then slid down into the pool below. What’s more, even though the slide can only hold 450 pounds (204 kilograms), it didn’t give an inch under the adventurous cow’s 700-pound (317-kilogram) body. When the cow’s owner learned of the escape and subsequent waterslide ride, he changed his mind about the slaughterhouse and said that the cow would become a family pet instead.[5]

“This is a wild animal:” Woman awakes to serval, native to Africa, in her Atlanta bedroom

In July 2021, Atlanta resident Kristine Frank burrowed deeper into the blankets when her husband got up early to let the dog out. But just as she was about to drift off to sleep, she felt something moving on the bed. Peeking over the blankets, she was stunned to see a huge cat lying next to her. She yelled for her husband, who came running and managed to shoo the cat out of the house.

Speaking to a local news outlet about the incident, Frank confirmed that she’d never seen such a cat before and that this one was more than 2 feet (0.6 meters) long and had spots and pointy ears. The cat was soon identified as a serval by the Georgia Department of Natural Resources, which also confirmed that these animals are native to Africa. At the time, it was rumored that the cat may have been illegally kept as a house pet and managed to escape from wherever it had been living. Poor kitty, it just wanted some snuggles.[6]

Swallowed by a whale? This man’s incredible tale of survival | 60 Minutes Australia

The biblical tale of Jonah and the whale has caused controversy over the years. Some emphatically believe the story to be true, while others believe it’s meant to be interpreted figuratively only.

In 2021, fisherman Michael Packard got a taste of what being swallowed by a whale would be like when he was out lobster diving off the coast of Cape Cod. He described diving down toward the bottom of the ocean when something akin to a freight train hit him, and everything went dark.

Packard went on to say that it took him five seconds to realize that he was inside a whale’s mouth. He tried to position himself to swim out of the whale’s mouth, but the giant mammal’s jaws were pinning his legs. The whale then started getting aggressive and began thrashing back and forth before “spitting” Packard out.

Miraculously, the only injury Packard suffered was ligament damage to his legs. Now, he can tell the truth when he says, “Boy, do I have a whale of a story to tell you…”[7]

Many people check the bowl before they use the toilet. And if you’re not one of them, this story might convince you to start doing just that.

In 2021, a 65-year-old Austrian man sat down on the toilet in his Graz home and almost immediately felt a “tweak” in his genitals. He jumped up and stared into the bowl only to find a 5-foot-long (1.5-meter) albino python staring back at him.

It was later revealed that the python belonged to the man’s neighbor who, as a reptile enthusiast, owned and kept 11 snakes and 1 gecko inside his apartment. Police at the time were unsure how the snake could have escaped its terrarium but confirmed that the reptile likely slithered into the sewer system of the building and landed up in the unfortunate victim’s toilet.

Pythons are not venomous, which means that even though the snake bit the victim’s most sensitive area, he only suffered minor injuries. The bite itself can be very painful, though.[8]

Pasco man saves his dog from an alligator

In May 2021, Mike McCoy was walking his 8-month-old Labrador, Jake, around a pond in Florida. Jake decided to wander into a bush and was promptly attacked by an alligator emerging from the water. McCoy heard his puppy yelp in pain and wasted no time jumping into the water when he saw Jake pinned in the alligator’s jaws.

McCoy thumbed the alligator’s eyes and tried to lift it from the water to force it to let Jake go. During the struggle, the alligator bit McCoy on both of his hands. Even so, it let Jake go, and both McCoy and his puppy were able to escape. Jake suffered several bite wounds, but fortunately, nothing that the local vet couldn’t treat. McCoy needed stitches in his left hand but was otherwise fine. At the time, Florida wildlife officials started a process to have the alligator removed from the pond.[9]

Christmas 2021 seemed to be the worst time of year for a certain critter in the town of Buckley, Wales. A grey squirrel took to attacking several residents, including seniors and children. It even started going after cats and dogs.

The attacks got so bad that some people warned their friends and family on Facebook to stay inside as the animal “was lurking” outside, just waiting for someone to attack. Buckley resident Corinne Elizabeth Reynolds bought a humane trap and caught the squirrel in her garden. By then, the animal had attacked 18 people in the space of only 48 hours, with some of them needing tetanus shots. Reynolds had been feeding the squirrel for a couple of months before it also turned on her shortly before Christmas.

The squirrel, dubbed Stripe, was eventually euthanized according to legislation regarding releasing grey squirrels into the wild.[10]