Everyone has seen pictures of galaxies in their elementary school science books, but what you might not know is that not all galaxies are created equal. In fact, some of them are downright bizarre-looking. While the Milky Way may look pristine and almost flawless, the following galaxies are the poor, snaggle-toothed children of the cosmos. 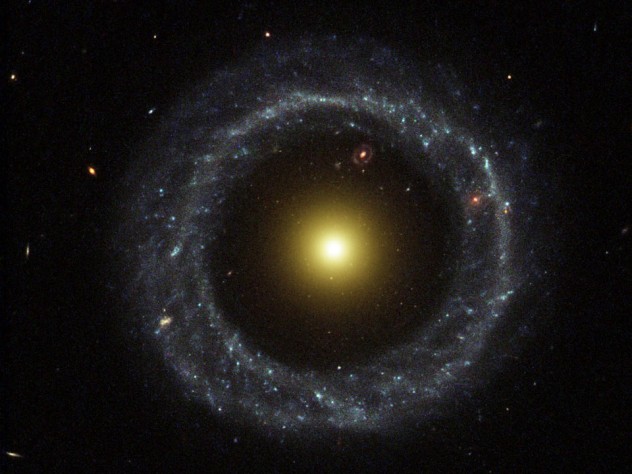 Hoag’s Object almost looks like two distinct galaxies, with its bright yellow cluster of stars at the center and a blue ring of stars separated from the cluster by a large void of space. But no, this is one galaxy, much the same way Saturn is one planet and not a planet with a ring-shaped planet around it.

When tasked with solving the problem of how Hoag’s object was formed, science came up with a resounding “what?” In the end, they just labeled it as a type of ring galaxy and moved on. Want an example of another galaxy of this type? Look just inside the top end of the ring. There’s one off in the distance, which is bizarre, since these kinds of galaxies are pretty rare. 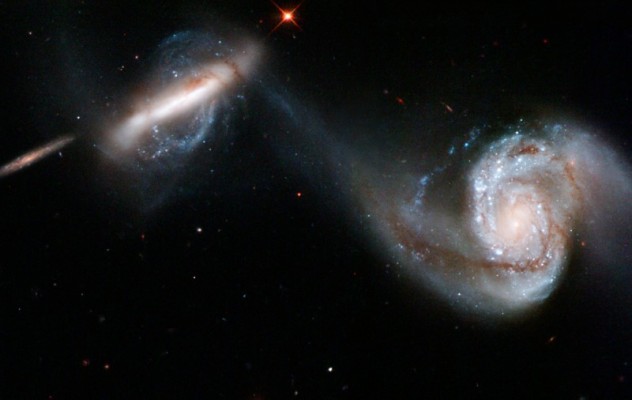 Arp 87 is what you get when two galaxies enter into a steel cage match—and only one leaves. Galactic collisions are actually pretty common and sometimes result in a lot of near misses, like what is going on here.

These two galaxies almost ran into one another a few billion years ago and gravity has strung out material between the two as they moved apart. It’s likely that they’ll sweep back toward one another in a series of near misses until they eventually merge into one big galaxy. For now, they remain tethered together by a thin stream of stars, gas, and dust particles, like enormous intergalactic bolas, which can only mean one thing: space Incas. 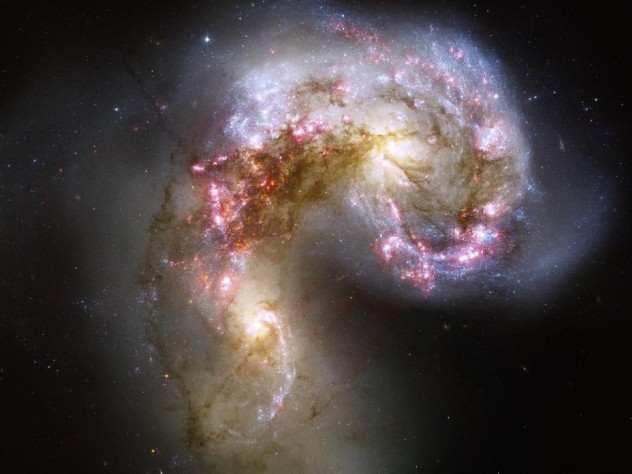 Here, we have another pair of galaxies devouring one another, but much farther along in the process. The only way you can tell there used to be two galaxies here is by the yellow clusters of stars at either end—these used to be the galactic centers. Now one giant, amorphous blob, these galaxies are slowly chugging toward a state of equilibrium that with result in the new galaxy’s final shape.

Most of the currently existing star clusters in this galactic pair will part ways before the new galaxy is totally formed—only the largest clusters will survive the merger. Perhaps the most interesting thing we can learn from observing this process is what will happen when the Milky Way inevitably merges with the nearby Andromeda galaxy, which is headed in our direction. Don’t worry, though: It won’t be for a few billion years. 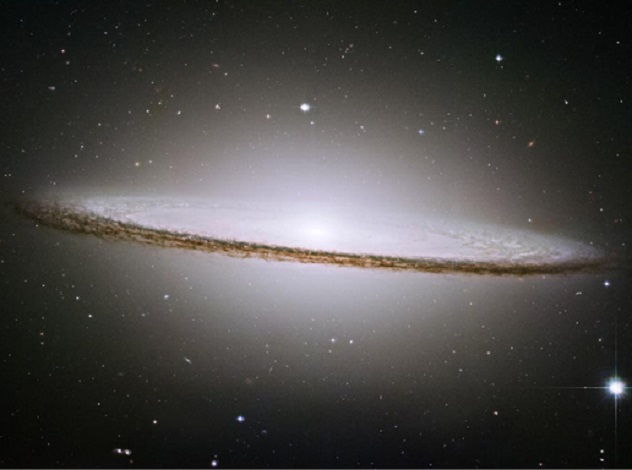 The Sombrero Galaxy, unsurprisingly, bears a striking resemblance to the hat of the same name. It has a large bulge in the center where some imaginary cosmic giant’s head might go and a broad, sweeping “brim.”

When we look at the bulge a bit closer, you can see that it’s actually made up of several different clusters of stars, rather than just one big one. The brim is pretty strange, too: Its intricate detail is another one of those things about space that makes science scratch its head. We’re not sure how rings like this were able to form. It’s also highly likely that the heart of the Sombrero Galaxy harbors a massive black hole. 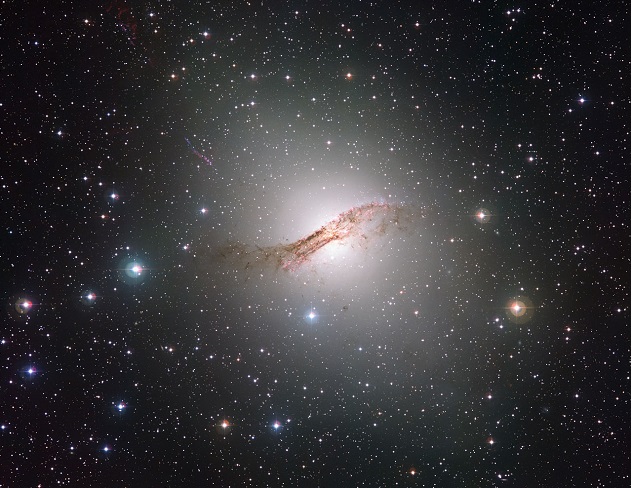 To the untrained eye, it might be difficult to distinguish Centaurus A as anything remarkable, but when you take a closer look, there’s something peculiar going on here. Centaurus A is large by galaxy standards, and large galaxies often come in one of two flavors: spiral and elliptical. But when astronomers took a look at this galaxy using radio imaging to peer through the veil of dust, they revealed a spiral hidden underneath. This is quite odd, since galaxies are generally one or the other. It is the only elliptical galaxy we’ve ever found that has spiral arms. The theory is that Centaurus A absorbed a spiral galaxy some millions of years ago, but such mergers don’t often—or ever, really—leave the spiral arms intact, so we have no clue what is happening here. 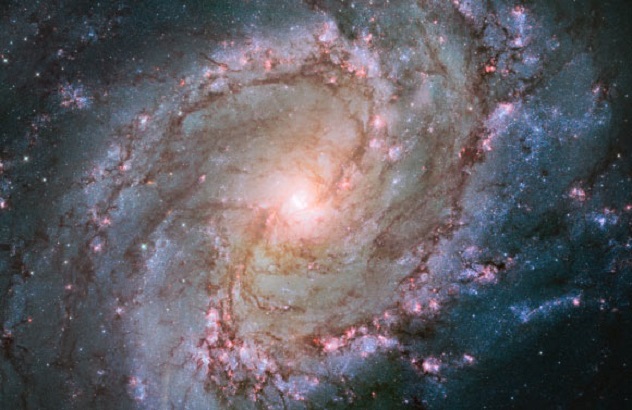 Located in the Hydra constellation, the Southern Pinwheel Galaxy, also known as M83, is one of the brightest galaxies in our night sky. We discovered it about 250 years ago, but it was considered a gas cloud until we were able to give it a much closer look. The vibrant colors in this enormous whirlpool of pink and purple are this galaxy’s most distinct feature, apart from the frequent supernova explosions observed by astronomers. There are currently eight active supernovas that we’ve observed in the galaxy and remnants of hundreds more. The pink color is a direct result of the new stars forming in the system, which release an immense amount of UV energy. That energy is absorbed by the surrounding dust and gas, turning it pink. Definitively calling it the prettiest galaxy is probably a bit subjective, but it does look like a giant space flower, so judge for yourself. 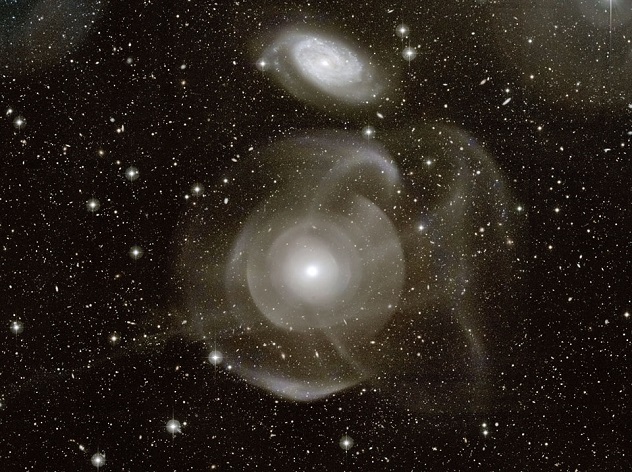 NGC 474 looks less like a galaxy and more like one of those weird, bioluminescent fish you find on the abyssal plain of the ocean. Astronomers aren’t entirely sure what is causing the discharge of so much energy from the otherwise boring-looking galaxy, but there are two prevailing theories. First, the shells could be the remnants of smaller galaxies absorbed by NGC 474. They could also be a result of tidal interactions with the galaxy behind it, seeing as they are in the process of colliding with one another. Because of these bizarre outer shells, we’ve learned that most known galaxies have irregular halos around them as a result of collisions with other galaxies in the “recent” (on a cosmic scale) past. 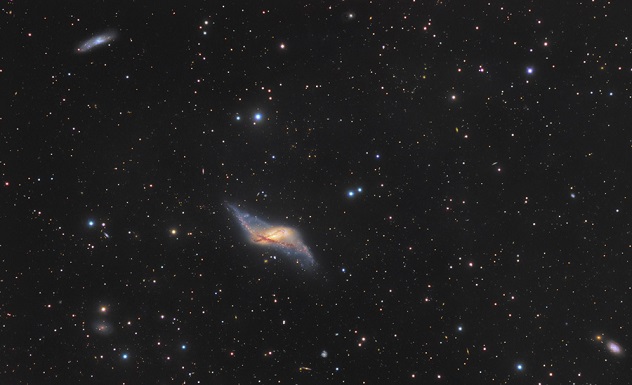 NGC 660 is a rare type of galaxy called a polar ring galaxy. How rare are they? We’ve only discovered about a dozen of them to date, and we’ve taken a single image containing roughly 10,000 galaxies. These galaxies have rings, stars, dust, debris, and other galaxy stuff in an orbit almost perpendicular to the galaxy’s disk plain. Where’d this material come from? It was most likely siphoned from a galaxy that passed nearby long ago, proving once and for all that the universe operates just like The Road Warrior. The ring is farther across than the galactic disk, and astronomers are observing it closely to watch how dark matter’s gravitational pull affects the disk in an effort to learn more about dark matter itself. 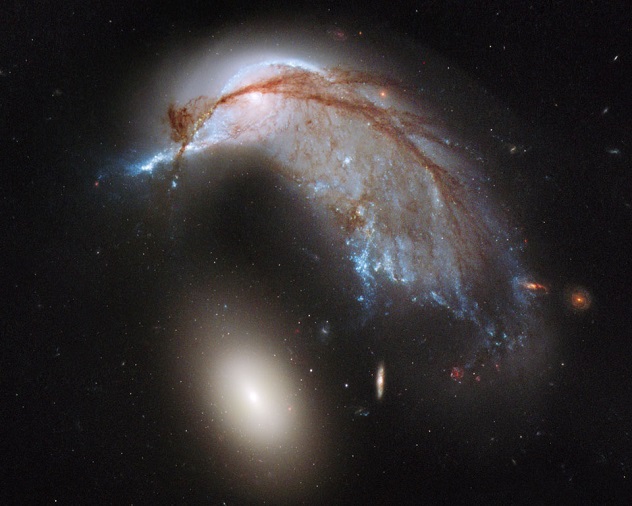 One look at the Porpoise Galaxy, or NGC 2936, will tell you exactly where the name comes from. It looks just like a dolphin, though some say it looks more like a penguin protecting an egg. In reality, this is a system of two galaxies: The “dolphin” is actually part of NG 2936, while the “egg” is called Arp 142.

The dolphin portion used to be a spiral galaxy similar to the Milky Way, but the immense gravitational forces of the denser galaxy below has contorted its shape significantly. The dolphin’s “eye” is what used to be the spiral galaxy’s core. This galaxy is also within the Hydra constellation, and within a billion years or so, the pair will merge into one. For now, we’ll just enjoy the galactic equivalent of a clown making balloon animals. 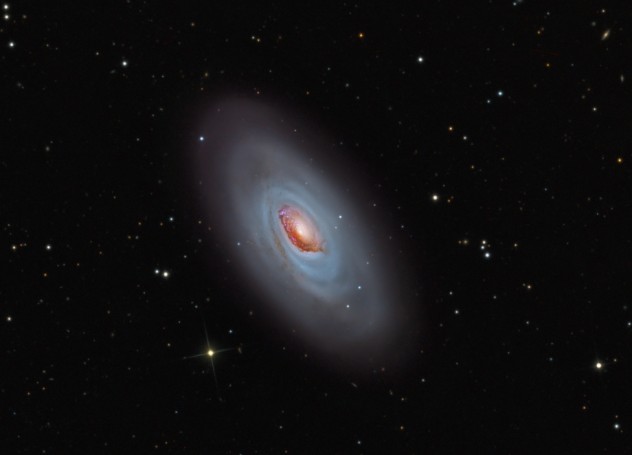 Is it possible for a galaxy to look evil? Because this one may very well be where those horrible alien creatures in The Avengers came from. The Black Eye Galaxy (also called M64 or the Sleeping Beauty Galaxy) is rife with creation, as the reddish color indicates. Red means an abundance of hydrogen, which means stars are being formed.

Strangely, the stars and gas in the reddish portion of the galaxy are all rotating in one direction, while the immense cloud of gas and dust surrounding it rotates the other way. While this is really bizarre, it’s explained in the same manner as most galaxy irregularities—it’s most likely the result of two galaxies merging together.

When he isn’t staring into the pressing blackness of space, Kier is a writer for Listverse and Cracked.com.