The Kepler space telescope was launched in March 2009 to identify planets outside our galaxy that match the size of Earth. When two of the four “reaction wheels” that maintain the telescope’s precise angling in space stopped working properly in 2013, many people thought the telescope’s mission was over.

Despite the setback, the telescope is working again. Among other intriguing finds, it has discovered another 1,000 exoplanets, which are planets that orbit a star other than our Sun.

10The Exoplanet With The Longest Year

If you feel that your birthday doesn’t come around quickly enough, be thankful that you don’t live on Kepler-421b. Of all the exoplanets that have been discovered so far, Kepler-421b has the longest year on record.

We find an exoplanet by looking for its shadow as it passes across its sun. The farther away an exoplanet is from its host star, the longer the orbit of the exoplanet. That makes an exoplanet like Kepler-421b harder to detect with our equipment because it so rarely crosses the path of its star.

So how long do you have to wait for your birthday on Kepler-421b? Approximately 704 days. That’s longer than the annual orbit of Mars, which takes 687 days to complete. Kepler-421b also has a surface temperature of -92 degrees Celsius (-135 °F) in case you needed another reason not to live there. 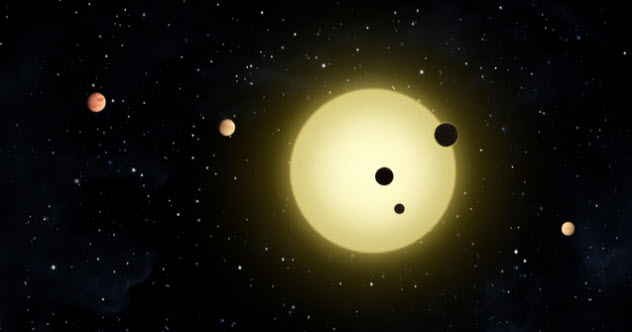 When we picture a solar system, we often think of planets with great distances between them as we have in our solar system. However, Kepler has found a solar system where the planets appear to be unusually close.

This system contains a star, Kepler-11, which is similar to our own Sun. Orbiting Kepler-11 are six planets, each of them larger than Earth. The largest planet is similar in size to Neptune, which is almost four times as big as Earth.

The planet farthest from Kepler-11 has an orbit only slightly larger than that of Mercury, the closest planet to our Sun. The other five planets each have smaller orbits, meaning that these huge planets get closer to their star than any planet within our solar system is to our Sun.

So how do these planets avoid pulling on and tugging at one another with gravity? They don’t. The entire system seems to be a mess where each planet’s orbit is manipulated by the others with their gravitational pulls. We can’t explain how this chaotic yet stable solar system works. But the system has been around for millions of years, suggesting that these orbits may be like a synchronized dance. 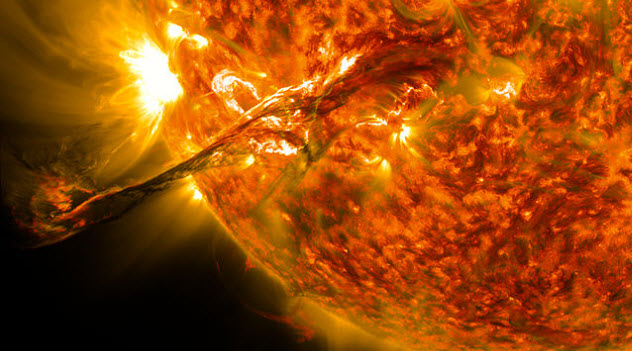 When trying to understand other stars, our best point of reference is our own Sun. So when the Kepler space telescope discovered solar flares on other stars that were one million times more powerful than those on our Sun, our scientists took notice.

With our Sun, flares come from internal magnetic reconnection. Initially, scientists believed that a planet about the size of Jupiter had to come close to a star for it to produce the gigantic solar flares they were observing with these other stars. This is known as the “hot-Jupiter theory.”

But scientists couldn’t find any huge planets nearby to explain the solar flares, which seems to disprove the theory. Although we can’t explain what’s going on yet, we do know that we don’t want our own Sun to produce gigantic flares. A solar flare of that magnitude would destroy all life on Earth.

7The Planet With Four Suns 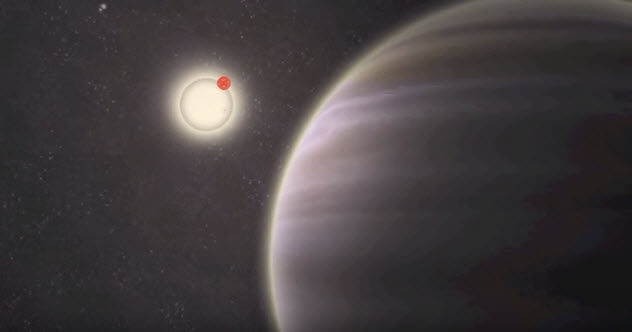 We’ve already discussed Kepler-47c, a planet that has two suns. But in late 2015, the Kepler space telescope discovered something twice as exciting, a gas giant slightly larger than Neptune that has four suns.

Its very existence baffles scientists. They can’t understand how this gas giant isn’t being torn apart by the simultaneous gravitational pull of four suns. They also can’t explain how it maintains an “apparently stable orbit,” something they didn’t expect from a planet orbiting four suns.

Even more interesting, the discovery wasn’t made by NASA. Although the data came from the Kepler telescope, amateur astronomers in a group called Planet Hunters were the ones who scoured the data and found this exciting planet. Amazingly, it was their first discovery.

The planet’s name is PH1, which stands for “Planet Hunters 1.”

6The Super-Earth Orbiting An Orange Dwarf 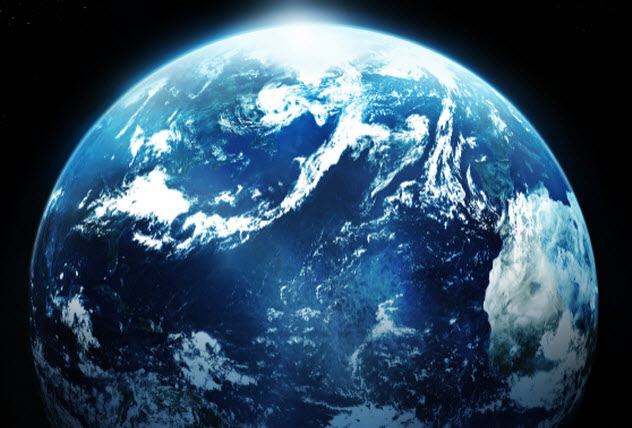 When the Kepler space telescope suffered its critical malfunction a few years ago, many people were convinced that its mission had ended. However, the telescope came back to life, proving its usefulness by locating a planet unlike any in our solar system.

With the highly memorable name “HIP 116454b,” this planet is approximate 2.5 times the size of Earth and 12 times its mass. The density of the planet suggests that it is either a “water world” (75 percent water, 25 percent land like our Earth) or a miniature, gaseous Neptune. If it is a water world, its proximity to its sun probably makes it too hot to support life.

This super-Earth orbits a type K orange dwarf, which is unlike a yellow dwarf such as our Sun. Orange dwarfs have less mass and up to three times the lifespan of yellow dwarfs. Although its star is cooler than our Sun, HIP 116454b orbits its star so closely that one year on the planet only lasts nine Earth days, which explains why this super-Earth is so hot.

5The Planet That Wobbles 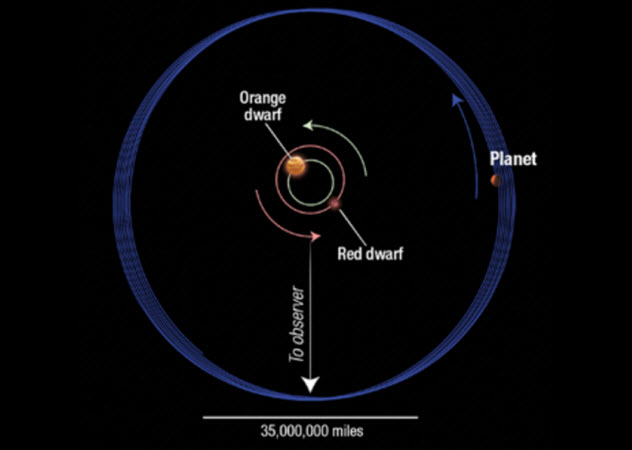 Kepler-413b is a gas giant with up to 65 times the mass of Earth. But the most interesting aspect of the planet is not its makeup or size, it’s the angle at which it orbits.

As this gas giant orbits an orange dwarf and a red dwarf (which has less mass and more stability than an orange dwarf), the planet tends to wobble on its axis, much like a child’s spinning top. Kepler-413b’s axis changes as much as 30 degrees every 11 years. For comparison, Earth’s axis has shifted by only 23.5 degrees over the span of 26,000 years.

If Earth were to undergo a violent axis shift like that of Kepler-413b, it would have an incredibly chaotic effect on our seasons. Kepler-413b also orbits too close to its star to have liquid water on its surface, making the planet uninhabitable for life as we know it.

4The Total Number Of Earth-Sized Planets In The Milky Way 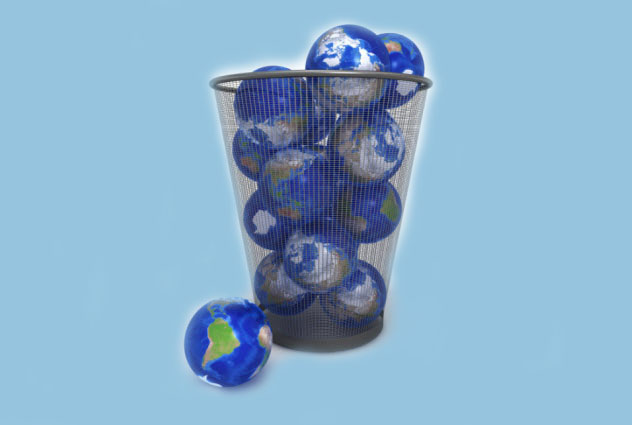 Not all the discoveries made by the Kepler space telescope are individual planets or stars. Sometimes, astronomers use the data to make predictions about our galaxy, the Milky Way. One of these predictions is a rough estimate of the number of Earth-sized planets within the Milky Way.

From the telescope’s data, astronomers have deduced that 17 percent of the stars in the Milky Way have an Earth-sized planet orbiting them. About 25 percent of the galaxy’s stars host a “super-Earth,” and another 25 percent are orbited by a mini-Neptune.

With approximately 100 billion stars in the Milky Way, that means we have a whopping 17 billion Earth-sized planets out there. We haven’t even begun to account for “alien-Earths,” planets that could host life in ways we haven’t discovered yet.

3The Star Destroying A Small Planet

Exoplanet May Have Been Destroyed by White Dwarf Star | Video

When scientists discovered a planet that had a “tail” of matter trailing behind it, they weren’t sure what to make of it. As they examined the data further, they concluded that the tail was actually debris from the planet as pieces were being torn off by its host star.

Unfortunately for the poor planet, its host star had become a white dwarf. As small to midsize stars like our Sun die, they swell into red giants, eventually lose their outer layers, and end up as small, hot cores known as white dwarfs. Larger stars become black holes or neutron stars when they die.

When this particular star became a red giant, there’s a good chance that the planets orbiting it were devoured by the red giant or drifted off into space as cold, lifeless bodies. The planets that remained—like the one found by Kepler—will have their matter pulled apart by the intense gravity of the white dwarf.

A similar fate may await our planet. If Earth survives the initial transformation when our Sun becomes a red giant, scientists believe that our planet will also be torn apart by the white dwarf that the Sun becomes.

Dubbed “Earth 2.0” by scientists, Kepler-452b has been described as a “close cousin” to our planet. With five times the mass of Earth, Kepler-452b is also about 60 percent wider. If a human were able to live on this planet, he or she would weigh about twice as much as on Earth.

But you might be able to sweat off the extra pounds. Kepler-452b orbits a star that’s 20 percent brighter than the Sun, although the planet is the same distance from its star as Earth is from the Sun. That makes Kepler-452b a larger, hotter, heavier version of Earth—but still potentially habitable.

In fact, the potential is so great that scientists at the Search for Extraterrestrial Intelligence (SETI) Institute locked onto the planet with the Allen Telescope Array, designed to pick up radio waves from alien transmissions. But they found nothing. “That’s no reason to get discouraged,” said Seth Shostak, senior astronomer at the SETI Institute, in a webcast. “Bacteria, trilobites, dinosaurs—they were here, but they weren’t building radio transmitters.”

1The Bizarre Star That Sparked An Alien Hunt

The Planet Hunters were tasked with looking for planets, but one star in particular—KIC 8462852—kept getting flagged by observers as “bizarre” and “interesting.” When scientists took a closer look, they found a sun with a shadow pattern that hinted at a tightly formed stream of matter circling the star.

Many ideas were proposed but shot down. For example, it would be incredibly coincidental for us to have caught sight of a temporary sea of comets. Given that this pattern appeared in a single star out of 150,000 recorded light patterns, scientists believed that more was going on. That’s when someone suggested that maybe these objects are alien structures designed to collect the sun’s energy.

Even though astronomers warned that the idea was a “last resort” explanation, news outlets jumped on the idea, sparking a wave of alien excitement on the Internet. The SETI Institute tried to pick up communications from the “alien structures,” but they couldn’t find anything. Although not everyone believed in the alien theory, some people are still clutching to the unlikely idea, convinced that the aliens are using a different method of communication that we can’t detect.

S.E. Batt is a freelance writer and author. He enjoys a good keyboard, cats, and tea, even though the three of them never blend well together. You can follow his antics over at @Simon_Batt, or his fiction website, www.sebatt.com.