Unlike Earth, every new planet we have discovered has been hostile to us. Some could become habitable if we figure out the answers to a few problems, like the unavailability of oxygen and water. Others would still be unsuitable for human life.

These deadly planets are ready to kill any creature that strays too close or tries to develop on them. Most of the planets on this list are not just too hot or cold. They have more terrible conditions that will never support life. 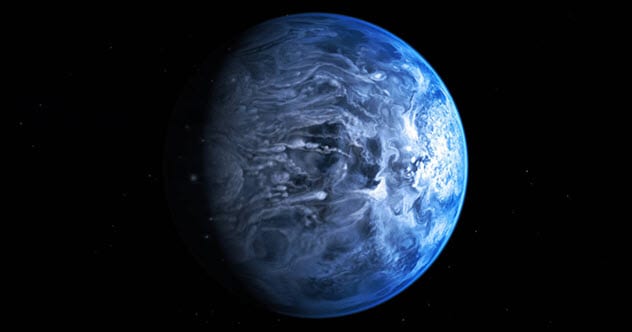 In 2005, astronomers discovered a Jupiter-sized exoplanet, HD 189733b, with a distinctive Earthlike blue tint 63 light-years away. However, unlike Earth, HD 189733b was not blue because of its seas and oceans. Instead, the color came from its silicate-rich clouds.

HD 189733b is also deadly. The first problem is the 8,700-kilometer-per-hour (5,400 mph) winds that blow across the exoplanet. That is seven times the speed of sound, which is insanely fast. For comparison, peak sustained winds of the notorious Hurricane Katrina blew at 280 kilometers per hour (175 mph).

Then there is the rain. The silicate-rich clouds of HD 189733b cause rain of molten glass to fall from the skies. That rain does not fall straight down because of the superfast winds we just talked about. Instead, this strange precipitation falls sideways.[1]

Even if we somehow found our way around that, we would still need to deal with the high temperatures on the exoplanet. HD 189733b is so close to its star that it is ridiculously hot. To put that in better perspective, it is so near to its sun that HD 189733b completes a revolution around its star in just 2.2 Earth days. Interestingly, a day on this exoplanet is also 2.2 Earth days long.

The gravitational interaction between a planet and its star can cause a planet to have a day and year of the same length if the planet becomes tidally locked to its star, just as our Moon is tidally locked to the Earth. This means that the planet rotates on its axis in the same amount of time that it takes to complete one revolution around its star. (Rotations cause days and nights, and revolutions cause years.)

A tidally locked planet always keeps the same side toward its sun. So, one side is condemned to nonstop daytime while the other has perpetual nighttime. 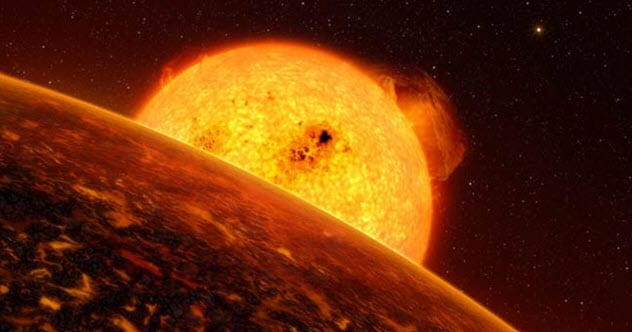 In February 2009, astronomers operating the Convection, Rotation and Planetary Transits (CoRoT) satellite discovered a new exoplanet in the Monoceros constellation 480 light-years away from Earth. They called it CoRoT-7b.

CoRoT-7b is a rocky, Earthlike exoplanet even though it used to be a Saturn-sized hot Jupiter—a term used to describe the huge, gas-filled planets outside our own solar system with tight orbits around their stars. Despite having a rocky surface that could support life, CoRoT-7b is not the place to be.

For starters, its atmosphere is filled with minerals that form rock clouds. These clouds send pebbles and small rocks falling from the skies as if they were rain. Even if humans managed to survive that, they would be destroyed by the insanely hot surface temperature of the exoplanet.

Our own Earth is 60 times farther from our Sun than CoRoT-7b is from its star. In the daytime, the star in the skies of CoRoT-7b appears 360 times bigger than our own Sun looks from here on Earth. Talking about daytime, CoRoT-7b may also be tidally locked to its star. A day and a year are just 20.4 hours long.[2]

As you may have guessed, this means that half the exoplanet permanently faces its star. The surface temperature of that side is between 1,980 degrees Celsius (3,600 °F) and 2,300 degrees Celsius (4,220 °F), which is enough to melt rock. Astronomers believe that the rocks on the side facing the sun are molten because they can’t remain solid at that temperature. 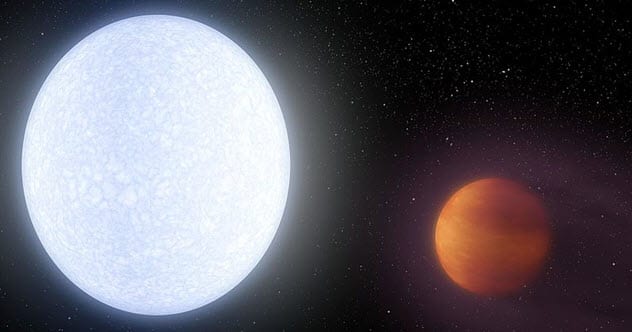 The extreme temperatures are caused by the relatively short distance between KELT-9 and KELT-9b. Both are so close that the exoplanet completes an orbit in just 1.5 days. Mercury is 10 times farther from our Sun than KELT-9b is from KELT-9.

Astronomers believe that exoplanet KELT-9b will lose its entire atmosphere to star KELT-9 in just 200 Earth years. By that time, KELT-9 will have become so big that it could be touching the exoplanet. However, astronomers do not think that the exoplanet will slam into the star.[3] 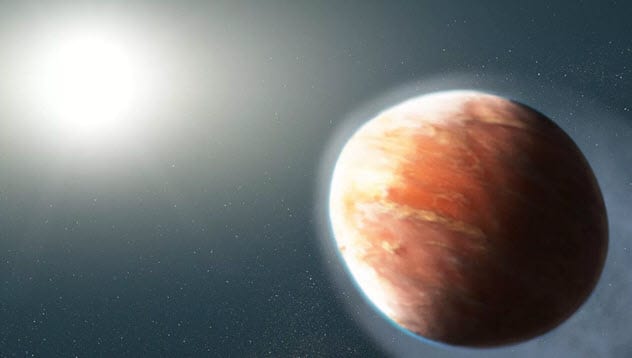 WASP-121b is one weird exoplanet. To begin, it is not spherical but looks more like a football. We mean American football and not the more popular one that Americans call soccer. But the shape is not what makes WASP-121b deadly. Instead, the problem is the exoplanet’s nearness to its star.

WASP-121b is so close to its star that temperatures hover around 2,540 degrees Celsius (4,600 °F). Solid or liquid objects cannot form there, and everything just remains in a gaseous state. This includes its metallic atmosphere, which is filled with iron and magnesium gases. Worse, the exoplanet is losing this atmosphere to its star, just like KELT-9b.

Curiously, the closeness to its star is the same reason that WASP-121b is stretching out of shape. The star is able to exert a heavy gravitational pull on the exoplanet. WASP-121b cannot resist the pull because it has a weak gravitational force. It manages to partly resist, though, causing it to bend out of shape.[4] 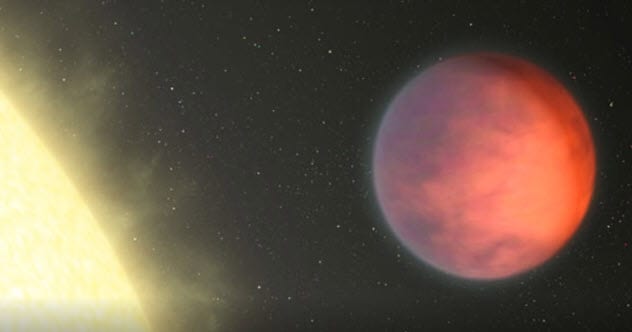 Upsilon Andromedae b is one strange exoplanet that rotates around the star Upsilon Andromedae A, which is 44 light-years away from Earth. The exoplanet is too close to its sun, completing an orbit in just 4.6 days. As you may have guessed, this suggests that it is tidally locked, with one side permanently facing the sun and one unbelievably hot.

Interestingly, the hottest area, the “warm spot,” does not face the star. Instead, it is on the side that never receives sunlight. This discovery puzzled astronomers because the side facing the star should be hotter. Astronomers believe that things are a bit different here because the wind transfers the heated air to the opposite side of the exoplanet.

Here is one theory as to how that works. The heat from the star Upsilon Andromedae hits the side of exoplanet Upsilon Andromedae b that is facing the sun, causing the air to heat up. When that air becomes hot enough, the wind transports it to the opposite end of the exoplanet. 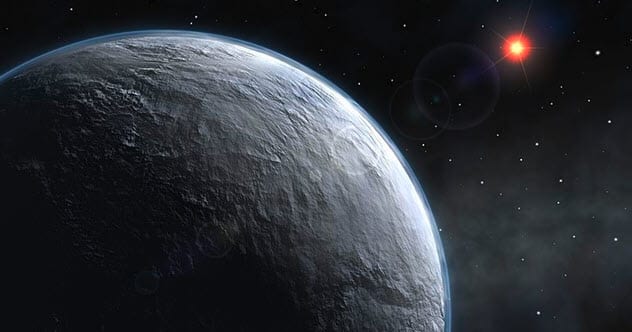 OGLE-2005-BLG-390Lb is a rocky exoplanet with a very thin atmosphere located right in the middle of our own Milky Way. All three factors made astronomers suspect that it could contain life when it was discovered. However, they now believe that it does not due to the exoplanet’s super-low temperature.[6]

The surface temperature on OGLE-2005-BLG-390Lb is around -220 degrees Celsius (-364 °F), which is too low to support life as we know it. For comparison, by some accounts, the lowest temperature ever recorded here on Earth is -97.8 degrees Celsius (-144 °F). The temperature was recorded in an area of ice-cold Antarctica that has never seen sunlight. An attempt to breathe in that area will destroy our lungs and cause instant death. 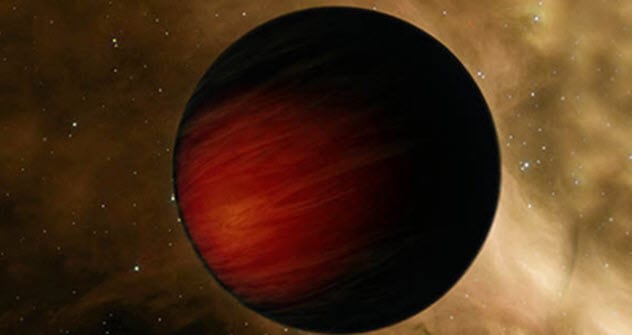 TrES-2b is the darkest planet out there. It is so black that coal will appear lighter if both were ever placed side by side. TrES-2b is the size of Jupiter and located in the Draco constellation 750 light-years away from Earth. Its star is GSC 03549-02811, which is almost like our Sun. 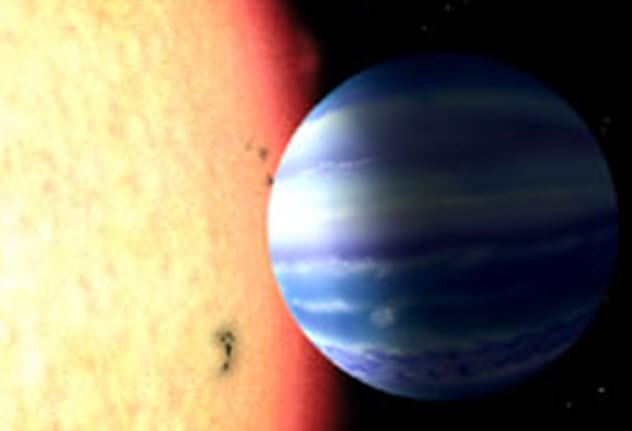 Planet OGLE-TR-56b lies in the Sagittarius constellation 5,000 light-years away from Earth. It is one of the “hot Jupiters” we talked about earlier. Hot Jupiters are often formed farther out in their stellar systems and later move closer to their stars.

Planet OGLE-TR-56b has already moved too close to its own star.[8] It is so near that a year is 29 hours long, and the exoplanet’s surface temperature reaches 2,000 kelvins. Over there, the clouds are not made of water but of vaporized iron. Rain falls to the ground as hot liquid iron. 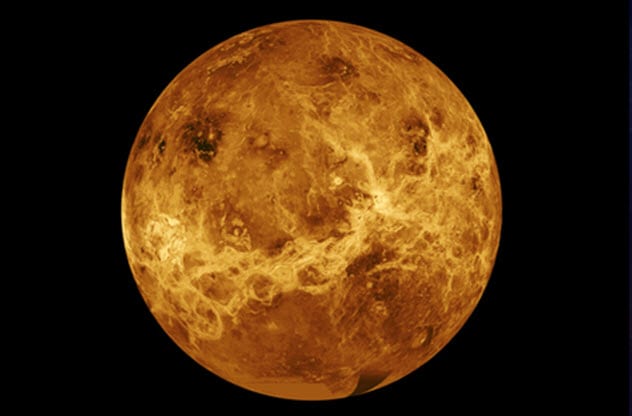 Deadly planets do not only exist outside our solar system. We have one lurking nearby, too. Without a doubt, Venus is the deadliest planet in our solar system thanks to its sulfur dioxide–rich clouds. Those clouds prevent useful sunlight from reaching the planet’s surface and stop deadly carbon dioxide from leaving the atmosphere.

The hot temperature remains constant all over the planet—even at the poles. Other hot planets are often cooler at the poles. Venus also retains this high temperature every day of the year. Even the nights are as hot as the days. Researchers think that Venus would be similar to Mercury if Venus did not have these clouds.

Interestingly, it also rains and snows on Venus, although things are quite different than what occurs on Earth. The snow is not made of liquid but of galena and bismuthinite metals. Rainfall is composed of deadly sulfuric acid. However, the high temperature on the planet means that rain never touches the ground. Instead, it evaporates midway to form another cloud.[9] 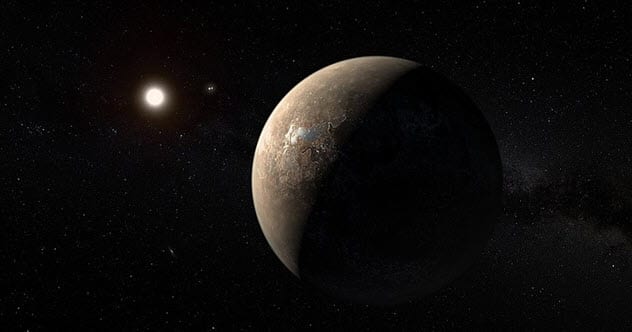 Proxima b looked promising when it was discovered. It orbits Proxima Centauri, a red dwarf star 4.24 light-years away from Earth. The exoplanet interested astronomers who thought that it had water and Earthlike properties. However, they soon discovered that they were wrong.

Proxima b is so close to Proxima Centauri that the exoplanet completes an orbit in 11.2 days. It is also tidally locked, leaving one side deadly hot and the other fatally cold and frozen. Between the two is a middle ground that is more temperate. However, that region is unlikely to support life because of Proxima Centauri.

As we mentioned earlier, Proxima Centauri is a red dwarf. One characteristic of such stars is their tendency to release solar flares every two to three months that strike the planets orbiting around the stars. Those flares would destroy the ozone layers of those planets, making them vulnerable to ultraviolet radiation from the stars.

We observed one such event on March 24, 2017, when Proxima Centauri released a solar flare toward exoplanet Proxima b. The flare was so intense that the star became 1,000 times brighter within 10 seconds. Proxima b received 4,000 times the radiation that reaches the Earth from solar flares. That is bad for anything living on the exoplanet.[10]