Censorship of various media is typically done for obvious reasons: If material is considered too offensive or too suggestive, then the work is changed to offer something “safer” in its place. While both the ethics and practicality of most censorship is highly debatable, there are a number of instances in which it failed entirely, offering a “safer” version that was even more offensive.

The director of Fight Club, David Fincher, is relatively unique on this list, as he had enough clout to offer pushback against any perceived pressure or censorship from Fox. He ended up using this clout to very amusing effect when Laura Ziskin, president of production at Fox, objected to a line of dialogue from Helena Bonham Carter’s character Marla. The line was, “I want to have your abortion.”

To those familiar with Fight Club as both movie and novel, this line likely seems pretty innocuous. Fincher thought so, too, so he struck a kind of Devil’s bargain with Ziskin: He would change the line that offended her so much but only on the condition that she could not change the new line. She agreed to Fincher’s terms, and “I want to have your abortion” became the much more explosive “I haven’t been f– –ed like that since grade school.” The outraged Ziskin asked to return to the original line, but Fincher—who had obviously gotten the last laugh regarding studio interference and censorship—absolutely refused.

Long before Samuel L. Jackson cemented the character of Nick Fury as the spymaster of Marvel’s hit movie franchise, Nick was serving as Marvel’s own James Bond. Back in the late 1960s, Jim Steranko served as the artist on Nick Fury, Agent of S.H.I.E.L.D.—one of the features in Marvel’s Strange Tales comic. He faced more censorship from Marvel than the average artist, sometimes for obvious reasons (suggestive cleavage or tight spandex) and sometimes for less obvious ones (a rotary telephone off the hook being considered too suggestive).

In one memorable instance, though, the artist got the last laugh: He originally drew one series of panels that culminated in Nick Fury kissing the Countess and embracing her. Marvel deemed this too sexually suggestive, and the panel was replaced with an odd shot of Fury’s gun in its holster. Considering that the panel immediately before it had Fury pulling her head toward him, with their eyes closed, the out-of-place loaded gun tightly thrust into its holster immediately became a loud and obvious metaphor for the spy’s penis.

In the pantheon of musicians, there are few who have actively courted censors through provocative lyrics and videos like Madonna. After all, part of her initial rise to fame came through her reputation as a “bad girl,” and it was in her interest to perpetuate that image. The culmination of this was her album Erotica, whose title song video played in Europe with graphic representations of both nudity and sex.

Part of the charm of Buffy as a series was its ability to transform the inner demons of its viewers into actual demons that characters could punch, stab, and stake. The show tackled subjects such as boyfriends becoming literal monsters after sex, but there was one aspect of teenage life that The WB network was squeamish about: lesbianism.

Over the course of the show, Buffy’s friend Willow eventually discovers that she is into women, primarily through her friendship-turned-relationship with a woman named Tara. Allegedly, the network was hesitant to show something as simple as two women kissing. In response, future Avengers mastermind and showrunner Joss Whedon made the metaphors for lesbian sex as loud as possible. At one point, that loudness was literal when the two women cast a spell that involved candles, holding hands, and orgasmic moaning.

Later on, the famous musical episode served up some wonderfully perverted lines about Tara being “spread beneath her Willow tree” and a naughtily placed pause when she sang “you make me com—plete.” By the time lesbian orgasms had become part of a catchy ditty, it’s likely that the network executives wished they would have simply been more open to the characters kissing. 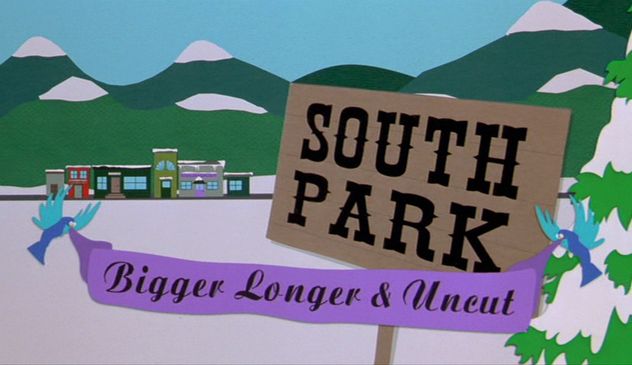 Compared to most creative endeavors on this list, South Park has always occupied a place of controversy. After all, its story lines revolve around young boys that regularly encounter sexual deviancy and the reoccurring death of their close friend, Kenny. Therefore, the idea that the South Park movie would face censorship is not surprising. What is surprising is that the censorship focused on the original title of the movie.

According to South Park creators Trey Parker and Matt Stone, the original title for their movie was South Park: All Hell Breaks Loose. They claim the MPAA made them change the title, because titles are supposed to be G-rated, no matter their content. Parker and Stone, incensed at the seeming double standard applied to their film (after all, the MPAA had not objected to films such as Hellraiser or From Hell), submitted their new title—South Park: Bigger, Longer, and Uncut. Instead of simply referring to “Hell,” over half of the title was now dedicated to a penis joke. To their amazement, the MPAA allegedly had no problem with the revised title. 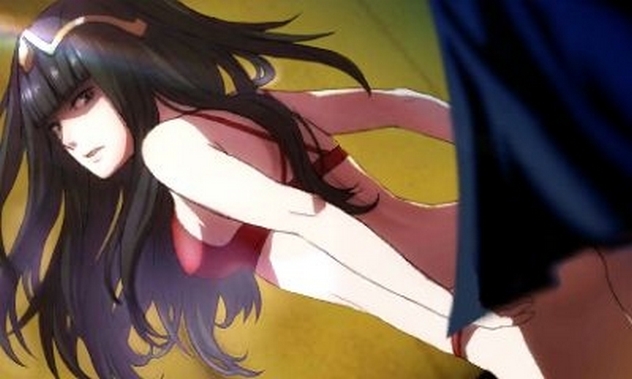 It’s difficult to think of a company that has gone back and forth on censorship more than Nintendo. This is the company that once censored all of the blood and gory fatalities from the original Mortal Kombat, only to release its sequel with full blood and gore intact. In short, Nintendo doesn’t always know what audience it is aiming for, which was abundantly clear in a bizarre bit of censorship for the Nintendo 3DS game Fire Emblem: Awakening.

Downloadable content for the game was released in 2013, and it included an image of the character Tharja in bra and panties. The image, as released in Japan, seemingly made it clear that she was in the midst of pulling her panties on. Nintendo of America decided to censor the image by adding a window cloth to partially obscure her panties. However, the bizarre placement of the curtain only really covered the panties themselves. This not only left her legs and buttocks mostly visible, but made it unclear whether she was in the middle of dressing or undressing—or, at first glance, entirely naked. Thus, with one simple change, Nintendo not only failed to remove the “offensive” aspects of the image, but arguably made it more erotic, as if the player was voyeuristically peeking behind the curtain at someone.

As musical figures go, Paul McCartney is usually not the first name you come up with when you think of offensive lyrics. However, Paul McCartney and Wings faced some interesting issues with the song “Hi hi hi.” McCartney believed that since it didn’t explicitly reference drugs and because it was spelled out as a greeting, the song would be safe. Nonetheless, it was banned by the BBC. However, part of the reason may be the change that the publishing company made to some of McCartney’s original lyrics.

Originally, he wrote an abstract line for the song—“get ready for my polygon.” It served, of course, as a cheeky, Picasso-esque reference to the singer’s penis. As it turns out, his publisher, Northern Songs, misheard the original line, and “get ready for my polygon” became “get ready for my body gun.” The subtext was now text, and there was seemingly no way that anyone could think that “body gun” referred to anything but a penis. In a later interview, McCartney grudgingly declared that the new, explicit lyrics were almost “better words,” and that the story of the song being banned in England made it more of a hit in America, noting that his American fans were vehemently anti-censorship.

It is difficult to forget a movie as timeless as Robocop. While the 1987 hit may have once seemed outlandish in its forecast of corporate-controlled law enforcement and technologically enhanced soldiers, the decades since its release have shown the movie to be eerily prescient. Ultimately, the movie serves as a satire of a number of things, including violence. Although certain censorship made the violence of the movie less blatant, it also made its impact worse.

Robocop was a movie that had to fight for its R-rating, as it had so much over-the-top violence in its initial screenings that it was going to be rated NC-17. Many cuts were made, including a full minute cut during the scene where Peter Weller’s Murphy character is murdered. The MPAA were quite concerned about some of the aspects of that scene, including Murphy’s arm being shot off and the back of his head exploding. Ironically, though, those scenes provided a kind of cold comfort to the viewer: They were simply so over-the-top that they forced the viewers to confront how silly and unrealistic the situation was (and, on a deeper level, why such a movie appeals to them).

By trimming these outlandish bits out entirely, the murder became infinitely more realistic. The viewers did not have the safety valve of knowing they were watching an extremely violent cartoon brought to life. By trimming that cartoonishness out entirely, all we had left was all-too-realistic torture and gritty murder.

See the new film that brings explosive modern-day effects to the timeless classic. Rent Robocop for only $4.99 at Amazon.com!

For younger music lovers, it is genuinely difficult to conceive of how powerful the presence of young Elvis was. Not only did his music electrify a generation hungry for rock, but Elvis “The Pelvis” Presley and his wildly gyrating hips had a reputation for making the fans want to gyrate their own hips, albeit not always on the dance floor.

Conscious of the effect Elvis could have on the viewers, Ed Sullivan hatched a plan: When Elvis sang during Sullivan’s TV show in 1957—his last appearance, as it turned out—Sullivan wanted the cameras to only film Elvis from the waist up. There was only one thing Sullivan wasn’t counting on: his studio audience. While he could control what the viewers at home could see, he could not control what the studio audience could see, and they loudly screeched in glee at every move Elvis made. Those watching at home heard the giddy screams and could only imagine what Elvis was doing to make those women scream. Sullivan wanted to keep the viewers from thinking about sex. Instead, he ensured that the women watching the program would be imagining the raw sexuality of what the cameras kept hidden.

The 1971 Rolling Stones album was groundbreaking for a number of reasons. The band had found a way to fuse their lifestyle of sex, drugs, and rock and roll with both lyricism and beauty. This fusion of high art and low thoughts was, perhaps, most apparent on the cover of the album: Designed by Andy Warhol himself, the cover featured tight jeans and a zipper you could actually unzip.

In Spain, that cover was considered too sexually risque, so they created an odd replacement: an opened can of Fowler’s Treacle with female fingers emerging from the wetness. The irony was quickly apparent to the fans: The dirty minds who might laugh a little too loudly at the idea of unzipping Mick Jagger on their album cover could quickly make a connection between the ample sex of the lyrics, the title “Sticky Fingers,” and a woman’s wet hands on the censored cover. In a truly Freudian slip, Spain arguably made the cover more sexual rather than less sexual.

Top 10 Ways To Make A Living In The Gig Economy