Our planet is amazing. Weird and wonderful things happen every day. Meteor showers, fire rainbows, and strange-looking clouds are just some of these awesome things you might be lucky enough to get a glimpse of someday, but the following phenomena top them all.

10The Staircase To The Moon

When you think of Australia, things like rugby, kangaroos, and the Sydney Opera House probably come to mind. Hundreds of thousands of visitors pass through Australia each year, eager to see what more the country has to offer, and the Staircase to the Moon is one such lesser-known attraction. From March to October of each year, the reflection of the full moon rising over exposed mudflats creates the incredible illusion of a stairway to heaven.

This awesome sight can be seen for three nights each month of the season from points all along the Australian coastline. In the town of Broome, where the event is most famous, locals take advantage of this natural phenomenon by selling a variety of crafts and goodies to tourists. Local talent also entertains the crowds while they feast their eyes on the breathtaking illusion.

Discover the incredible ways nature just completely messes with our heads with the fascinating book Handbook of Unusual Natural Phenomena at Amazon.com! 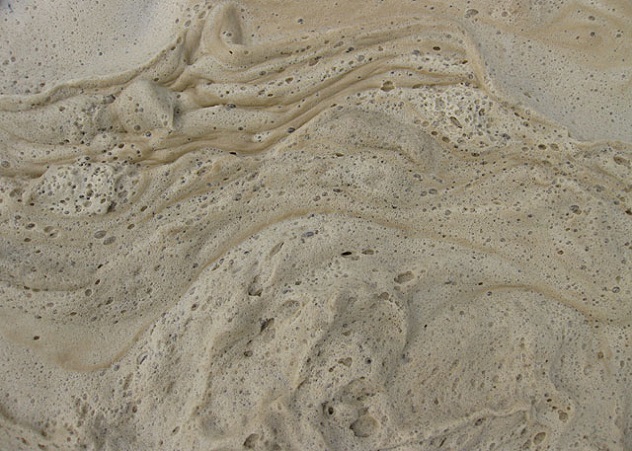 You really have to be in the right place at the right time if you want to see the natural ocean phenomenon known as cappuccino coast. It’s extremely rare, but sometimes, the sea churns out thick brown foam that resembles cappuccino froth. The most recent occurrence took place in New South Wales in 2013. The foam even covered the lifeguard’s center and other buildings near the beach.

This interesting phenomenon has a gross explanation, though. The creamy foam gets its brown color from dirt and other impurities like seaweed excretion, fish remains, and dead ocean plants. Strong currents mix all of these impurities together, eventually creating bubbles and foam that are carried off to the shoreline. This hasn’t stopped people from testing out the foam, though. At Yamba, they dove right in and enjoyed the strange waves just as one would a bubble bath.

Recently, a beach in the Maldives started glowing at night. The sand resembled millions of little blue fairy lights. An amazed photographer from Taiwan thought he was capturing blue sand on his camera and excitedly posted the photos online, but it turned out that the glowing was actually caused by living creatures.

The phenomenon occurs when a certain form of bioluminescent plankton called Lingulodinium polyedrum washes up on the shoreline. Most of the time, these little creatures go about their business and float around the ocean undetected. However, when currents are strong or they get caught up in waves crashing on the shore, they start “stressing,” which causes them to glow.

The glowing sand phenomenon is also known as a “red tide” because of the reddish color it produces in the water during the daylight hours. The beauty of this natural event hasn’t gone unnoticed—director Ang Lee used footage of bioluminescent plankton in his hit film, Life of Pi. 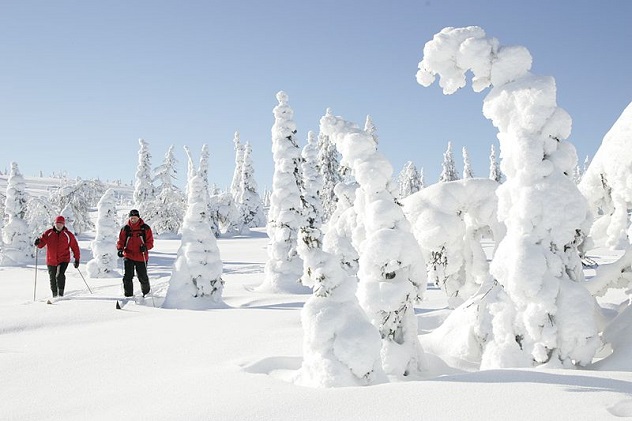 When temperatures fall below freezing, snow is bound to fall, and snowy landscapes make for beautiful holiday pictures and postcards. Italian photographer Niccolo Bonfadini had a whole new experience taking photographs in freezing weather, though. He braved temperatures of up to – 40 degrees Celsius (–104 °F) to capture the frozen trees of the Finnish Lapland. The trees are bent over from heavy layers of snow and look like giant worms protruding from the ice.

Bonfadini went so far as to set up camp on the icy plains to ensure that he could get the best shot of the trees before the sun rose. One of his photos shows the snow-cloaked trees standing in a formation reminiscent of Stonehenge. Another features two frozen trees that seem to bend toward one another, forming a snowy arch. Even NASA took note of Bonfadini’s work and named one of his photos Astronomy Picture of the Day on its website. 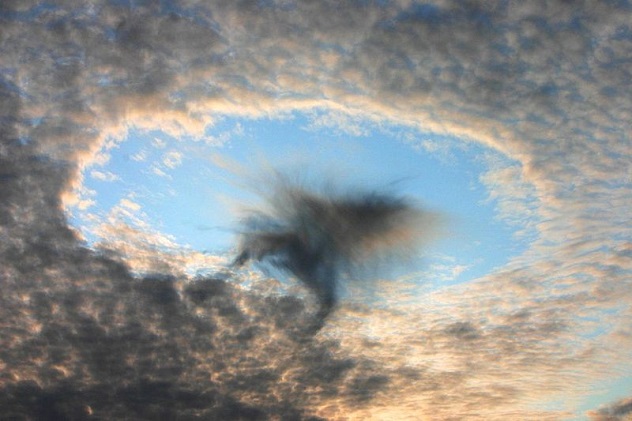 Have you ever looked up at an overcast sky and seen a hole where the blue sky is peeking through? Did you wonder what may have caused such a thing to form? You’re not alone. Scientists have been pondering the same question for many years, since the first sighting was reported in the ’40s. Many conspiracy theories have been formed about these “skypunches,” including rumors of alien activity and secret rocket launches.

In 2008, a study analyzed all of the scientific research that has been performed on the subject over the years to connect the dots. The findings revealed that airplanes are responsible for the phenomenon. When airplanes fly through a layer of cloud cover, they create a hole in the clouds visible from the ground. The study also described the possibility that skypunches could result in inadvertent cloud-seeding. It seems that the global climate would remain largely unaffected by this, but it could increase rainfall in areas around airports.

Everyone knows that thunder and lightning always come together, but a very rare occurrence in thunderstorms is upward lightning. Tom A. Warner had been researching and filming lightning for years when he realized he had witnessed this phenomenon many times without knowing it. Out of almost 800 flashes captured on film, Tom noticed that 41 of them were actually flashing upward.

The flashes can even “start” from a tall building or tower rather than the sky. Warner found that the shape of the tower or building is integral to enhancing the existing electric field and creating an upward lightning flash. He further determined that upward lightning would not be possible without the proximity of tall structures. Further research showed that during a snowstorm, upward leader flashes can be initiated by tall buildings without the presence of a “normal” lightning flash.

Learn more about one of nature’s most powerful and awe-inspiring phenomena with Lightning (Nature in Action) at Amazon.com! 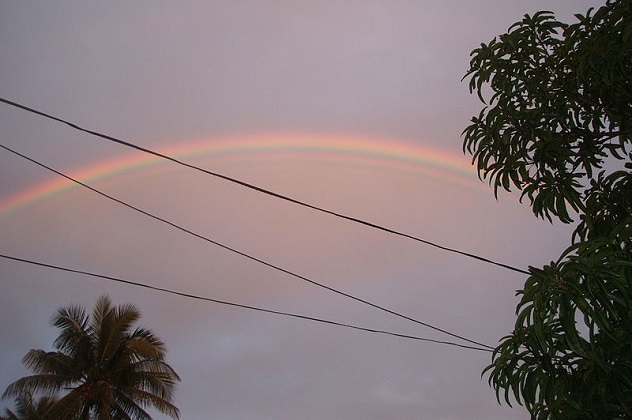 Tertiary rainbows, or triple rainbows, are so rare that only five occurrences have been documented in 250 years of scientific literature. Until as recently as 2011, the majority of scientists refused to believe that triple rainbows existed at all. That’s when photographic proof became available, and a new meteorological model confirmed their veracity. In one photo taken during the research, even an amazing fourth rainbow is faintly visible.

Tertiary and quaternary rainbows form due to an unusual pattern of reflection inside water droplets. When light is reflected from droplets at a certain angle, a single rainbow appears. However, when some of the light is reflected back into the droplet, a secondary or double rainbow forms. In theory, this can happen an infinite number of times. It’s very rare for it to happen more than once or twice, though, creating the elusive triple and quadruple rainbows. Naturally, these rainbows are progressively dimmer and much harder to see than a single rainbow. 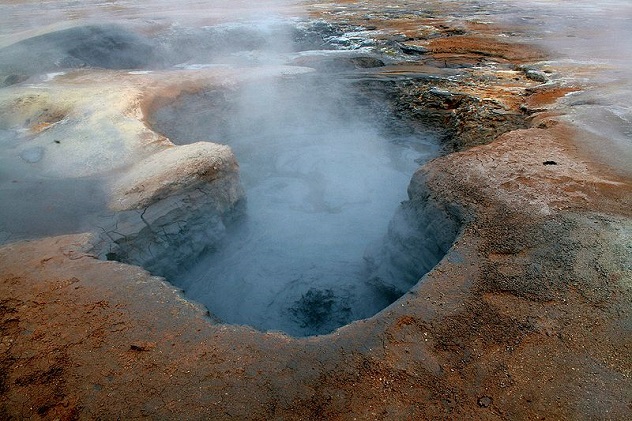 Iceland is a beautiful travel destination that has a permanent place on bucket lists around the world. There are many fascinating sights in the country, including breathtaking geysers, waterfalls, and glaciers. The Hverir hot springs, however, may be the most awe-inspiring of all.

Hverir is a geothermal field situated near Krafia, which is a volcanic structure in north Iceland. The natural surroundings create an amazing view of the steam and hot water fountains springing forth from cracks in the Earth’s crust, surrounded by boiling pools of mud, lava domes, and puddles of sulfur.

To ensure that tourists can view the dangerously hot eruptions out of harm’s way, special walkways have been built around the area. A photograph that was entered into the 2014 National Geographic Photo Contest captured Hverir bathing in the glow of the Icelandic midnight sun with steam rising in the distance.

Twice a year, the Sun turns black in Denmark. At least, it appears to, as the migration of the European starling creates a sight so spectacular and huge that it literally blocks out the Sun.

Starting in March or April, millions of starlings begin their annual journey to Scandinavia, returning in October and November. During this time, the birds usually gather during sunset and entertain delighted onlookers with their “dance” across the sky. They almost resemble a sardine run in the way that they stick together during all their movements.

It is during these “performances” that the Sun turns black as the almost impenetrable cover created by the huge number of birds blots it out. Once the starlings tire themselves out, they descend in unison and play in the nearby water.

If you’re an avid surfer, you have most likely heard of the Pororoca wave, one of the longest waves in the world. Also known as a tidal bore, it occurs in the Amazon twice a year, producing waves that can grow up to 3.7 meters (12 ft) tall. It can be heard coming about 30 minutes before it reaches the surfing zone.

Since it is a very dangerous wave, only hardcore and very experienced surfers should attempt to take it on. Not only is the wave very fast, the water is full of dangerous wildlife, including crocodiles and even piranhas, not to mention large pieces of debris and even trees. It is therefore advised to make a boat part of the surfing experience just in case something goes wrong. A Brazilian surfer by the name of Picuruta Salazar once managed to surf a record-breaking 12.5 kilometers (7.8 mi) of the wave and hold on for an impressive 37 minutes.

Estelle lives in Gauteng, South Africa. She hopes to travel the world someday and maybe see some of the phenomena on this list.