Over the last few hundred years, humans as a whole have gradually become much less harsh and violent in the way we deal with problems. So, when you consider that necessity is the mother of invention, it’s not surprising that humans have also come up with much more gentle methods of subduing people. While they still might sting, the following gadgets are sure to safely stop anyone in their way.

Commonly used for home defense and law enforcement, the Arma 100 is a simple yet effective projectile launcher. Legal all throughout the United States, the Arma 100 is a great substitute for a more common household handgun or shotgun.

Little more than a handheld air gun, the weapon uses single-shot gas cartridges for propulsion and is super easy to use. Provided the user can aim at least a little, the Arma 100 can be used effectively from up to 6 meters (20 ft) away. When a bean bag projectile hits a target in a vulnerable spot—such as the stomach or head—the target will be incapacitated for a time. At the very least, a shot or two should easily scare away even the bravest of criminals. Though the Arma 100 is simple, it still packs quite the punch and is a great non-lethal weapon overall.

Similar to a personal stun gun, jet protectors are another non-lethal means of stopping an opponent. Rather than electrocuting someone, however, jet protectors fire OC irritant at the attacker, quickly disabling them.

TOP 5: Best Tactical Pen for Survival and Self Defense 2020!

The only melee weapons on this list, tactical pens are simple weapons designed to be used against a nearby assailant. Based on self-defense sticks such as the Kubotan, tactical pens are generally fitted with a spiky metal or plastic tip, along with a blunt side on the other end. Oh yeah, and they are fully functional pens, too.

While they might not seem too dangerous, they are certainly able to inflict a large amount of pain with just a few strikes. In fact, as long as you hit a nerve point or patch of soft tissue hard enough, it’s possible to cause as much as temporary paralysis. If that’s not enough, a hard, well-placed strike will also break bones, especially if it strikes against bare skin. While they might not look like much, tactical pens can certainly do some serious damage. 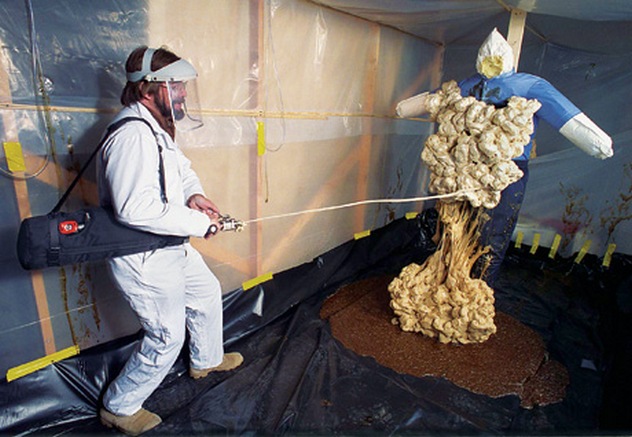 While the sticky foam gun is technically not a lethal weapon, it has only been used a few times due to its not-so-safe tendencies. Originally designed in the mid-90s, it has since only been used in the US intervention in Somalia (albeit, with a multitude of problems).

The underlying concept of the sticky foam gun was fairly simple. Using a backpack tank filled with highly pressurized chemical foam connected to a nozzle the operator could aim, the liquid foam was shot at the target. Once it came into contact with anything solid, it stuck fast and hardened very quickly, entrapping the target.

Unfortunately for the target though, the chemical foam could easily do more than just immobilize them. In fact, if it got onto the face, the target could easily suffocate. Not exactly the result you want from a non-lethal weapon. Another problem with the sticky foam was that while it was great at sticking to things, it was absolutely horrible at coming back off. At best, it could take several hours to fully decontaminate a victim. Though it was an interesting idea and showed some promise, the sticky foam gun had a few too many problems. In the end, it was probably destined to fade away into obscurity as just one of many failed weapons. 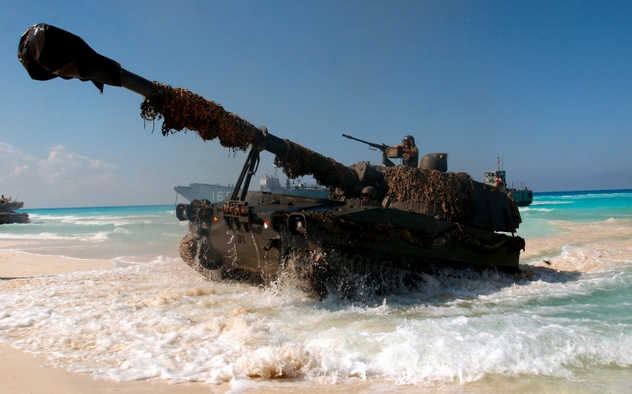 Codename for a still-secret project being developed by the US Army, the XM1063 is a non-lethal artillery shell designed to suppress enemy personnel. Although many details are classified, some things have been confirmed.

According to the military fact sheets, the XM1063 will take the form of an everyday artillery shell and will be fired from a typical 155mm howitzer. Upon being fired, the shell releases 152 smaller packages. As the packages float down, they spray an unnamed chemical compound over the ground below.

Although the military still hasn’t confirmed exactly what the payload will be, there are a few possibilities. The most likely is a crowd control agent such as tear gas, a malodorant, or a new, unreleased chemical. Whatever the specific details turn out be, the XM1063 is destined to be an interesting force on the battlefield. 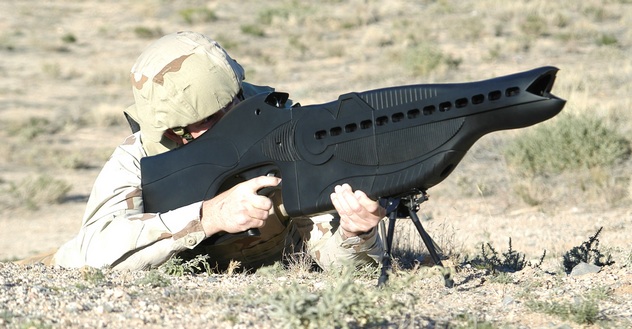 The only light-related weapon on this list, the PHaSR is a non-lethal laser gun designed for use by both the military and law enforcement. Taking the shape of an ordinary rifle, albeit with a more futuristic look, the PHaSR is a completely self-contained system that fires two non-lethal laser wavelengths into the eyes of the target. Provided the target gets a good look, their eyes become temporarily blinded and their bodies disabled.

Because lasers can do permanent damage, the developers of the PHaSR are incorporating a few different safety features. One of these is an eye-safe laser range finder. In prior projects involving blinding lasers, targets were often subjected to overly ineffective or powerful lasers. This was often due to the different ranges between the weapon and target. With the range finder, however, the weapon will be able to calculate the maximum safe laser energy to use. With its awesome-sounding name and ability, the PHaSR truly is one of the better non-lethal weapons out there.

For anyone following the civil unrest in Turkey, there’s a good chance that you’re already familiar with this special weapon, even though you may not know its name. The Turkish TOMA, or “Toplumsal Olaylara Mudahale Araci,” is an armored vehicle mounted with a high-powered water cannon. While blasting people with water isn’t a new idea, the TOMA brings the concept to a whole new level.

The massive 5-ton TOMA can hold up to 10,000 liters (2,200 gal) of water. The water can then be fired in a variety of different pulses, controlled by an operator inside the vehicle. The water can easily knock down and tear the clothes off of anyone in its path (as the above video demonstrates).

The TOMA takes great care to protect its operators. For example, should rioters get too close, the vehicle can spray tear gas around itself. This easily stops any nearby protesters. The vehicle also comes with its own Positive Cabin Pressurization System to keep all that tear gas outside. With its hulking demeanor, the TOMA is one of the meanest riot control vehicles of all time.

The only explosive device on this list, stingball grenades have been used extensively in both prisons and crowd control. Although they may sound quite dangerous, their design has several key features to limit lethality.

The most important aspect of a stingball grenade is that, unlike regular grenades, stingballs are made almost entirely of rubber. This ensures that shrapnel and the over 100 rubber pellets inside can’t do any permanent damage. The rubber impact is still very painful, however, and can cause horrible bruises.

If that isn’t bad enough, most stingball grenades also detonate with a flash of about 6 million candelas and a bang of 180 decibels. To put that in perspective, a fire alarm strobe light only emits around 75 candelas, and 180 decibels mark the beginning of the death of hearing tissue. In short, while stingball grenades aren’t lethal, they should still never be messed with.

Simply put, the “Shockwave” is a fancy name for a series of taser cartridges that have been wired together. Each unit consists of six cartridges, each of which fires two probes at different angles. If 12 simultaneous shots aren’t enough, then the units can be stacked together to form a wall of disabling tasers. Typically, the units are deployed however the user wants. Shockwave units can be mounted onto the grilles of Humvees and similar vehicles.

With the rare ability to disable targets en masse, the Shockwave is expected to be used in a variety of situations. The main ones would be to stop suicide bombers from entering restricted zones and to disable entire sides of a crowd. No matter its use though, the Shockwave is a surefire way to keep people away. 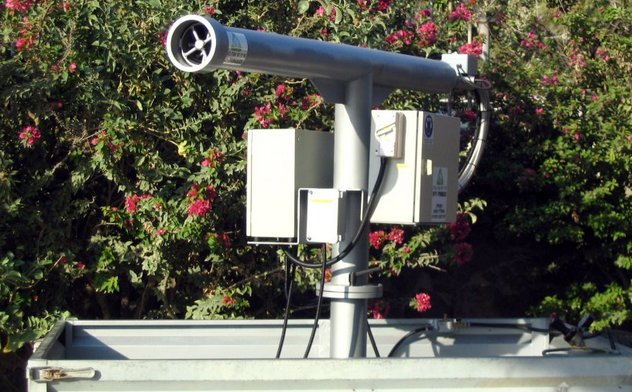 The “Thunder Generator” was originally developed by Israeli farmers to scare away crop-eating birds. However, it has now grown to become a viable weapon against humans.

In good conditions, the Thunder Generator can hurl a series of super-short shockwaves up to 100 meters (328 ft) away. In general, these shockwaves serve to only knock down and stun individuals. Any closer than 10 meters (33 ft), however, and the waves can result in permanent damage or death.

To generate the 2,000 meters-per-second (6,560 ft/s) shockwaves, a highly combustible mixture of petroleum, air, and cooking gas is detonated. As the resulting waves of energy bounce around through the barrel, their force grows exponentially. Together, this produces a quick series of waves, each of which lasts a mere 300 milliseconds. With all of these benefits, it shouldn’t be hard to see why the Thunder Generator is the pinnacle of non-lethal weapons.

Oliver Bishop currently resides in Northern Virginia. When he’s not busy with middle school or gaming on his PC, he’s practicing the violin. He also loves to eat breakfast foods late at night.