Because of most of us are peaceful, law-abiding citizens, much of our knowledge on how to use weapons to cause harm comes from movies and TV shows. It works, too, because they serve as the perfect escape from our mundane lives, devoid of awesome explosions and destruction. But if you ask anyone who works with those weapons for a living, a lot of what TV shows and movies portray is exaggerated at best and wildly inaccurate at worst.

Now, we’re not saying that everything in movies should be like it is in real life, as what would be the point of that? Willing suspension of disbelief is essential for enjoying fictional pieces of work, though it’s an issue when these widely believed weapon myths end up causing problems in real life.

You may have seen this one used plenty of times. Someone gets shot or stabbed, but due to not being able to go to a regular hospital, they end up burning the wound to stop the infection. In the minds of the writers, it probably works due to the simple equation of “burned skin = burned bacteria.” If they took just five minutes to learn how wounds work, though, they’d realize that it’s the worst idea ever.

Burning the wound doesn’t just fail to reduce the risk of infection; it actually makes it worse than it would have been if you’d done nothing. While it’s true that the heat kills the active pathogens already in the wound, it also causes serious burns. Those burns allow other, possibly worse types of bacteria to get in, as the natural defenses of the skin are no longer working. Cauterizing the wound is only acceptable if you’re in a situation involving rapid blood loss, and there’s absolutely nothing else you can do to stop yourself from bleeding out. Movies, however, never use it for that.[1]

Grenades in movies are portrayed as the ultimate weapon of destruction. You toss one in a house, and it goes up in flames. Their explosions are also shown to send people flying. That is, of course, except when the hero is walking away from the huge grenade explosion, in which case grenades are apparently harmless.

In reality, grenades aren’t capable of doing any of that and aren’t even meant for that purpose. Grenades are used for incapacitation, and most of the active grenade designs we have aim to maim with shrapnel fragments. Sure, if you throw yourself on top of one, you may end up getting blown apart, though that would be the only case grenades can do that. There are other, better weapons used for huge explosions that would send people flying.[2]

8 Warning Shot To The Leg Is Not A Real Thing

This is something many believe due to how prevalent it is in popular fiction. We think that it’s a regular part of a cop’s training to first fire a warning shot in the air and then, if the warning shot didn’t help, shoot the legs to bring the criminal(s) to the ground. We’re not entirely sure where this comes from, but movies and TV shows regularly employ it.

Actually, no cop in any country is trained to do that, for a few good reasons. For one, it’s ridiculously hard to aim at someone’s legs—or any specific body part really—when they’re moving. If a cop is able to do that, they’re probably overqualified and deserve to be a master marksman in some elite division of the military. Another reason is that leg wounds can be fatal if the bullet hits the wrong place and have equivalent odds of killing someone as wounds in the torso, which doesn’t exactly work as a warning.[3]

We’d be more forgiving toward this one, as working knowledge of how landmines work isn’t something TV or movie writers should have easy access to. Regardless, landmines are a real danger in many conflict areas of the world, and the only things we know about them come from movies.

The landmine “click” sound is so widely employed in fiction that TV Tropes has a whole page dedicated to it. There is even a movie based entirely on the trope, creatively named Landmine Goes Click. As you’d have guessed, it refers to the belief that landmines make an audible click when you step on them and only explode when you step off.

We don’t need to tell you why this is inaccurate, because if that’s how landmines worked, it would defeat their whole purpose. They usually go off as soon as you step on them, as the goal is to cause the maximum amount of damage without giving you any time to think.[4]

6 Shooting C4 Can’t Cause An Explosion 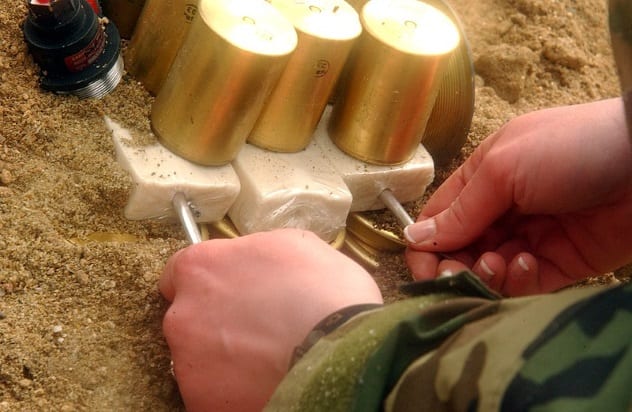 Explosions are some of the most misunderstood things in movies. Their impact is massively overestimated or underestimated, depending on what movie you’re watching, despite information on how they work being readily available online, if the writers just bothered to look. For this one, we’ll take plastic explosives like C4.

Movies and TV shows would have you think that C4 will explode just from being shot or tossed into a fire. As it happens, though, C4 is one of the most stable explosives we currently have. It won’t explode from being shot, and it burns really slowly compared to other explosives, too. You can even light it up if you’re stuck in a tricky situation with no available sources of fire, as plastic explosives are thoroughly tested by the military for stability before they’re put into use. This doesn’t mean that you should go around playing with explosives in your free time, as some of them, like dynamite, are unstable in nature and will absolutely explode when shot.[5] 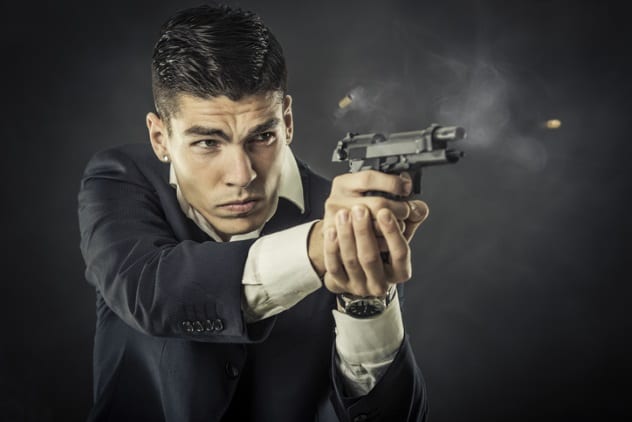 How many times have you seen people in movies collapse and die from a single gunshot? We’re guessing a lot, as it’s another one of cinema’s oldest tropes. Not only does it betray a severe lack of knowledge of how guns work, but it also causes unnecessary panic in real gunshot situations.

As it turns out, gunshot wounds aren’t fatal in most cases. We’re not saying that a single gunshot wound has no chance of killing you—it certainly does—though it doesn’t happen as often as you’d think. People have survived much worse than what movies would have us believe would straight-up kill us. Even in cases of multiple gunshot wounds, there’s a good chance that the you can survive as long you get immediate medical attention.[6]

Throwing a lit cigarette in gasoline and spectacularly blowing it up has been a part of action movies for a long time. It makes for a tense moment and might be done at the end of the movie as a cathartic show of dynamic decision-making, as if no one has come up with it before. No matter how good it looks on-screen, in reality, there’s no way you can use a cigarette to start a fire with gas.

On paper, this should absolutely work. Cigarettes burn at around 700 degrees Celsius (1,300 °F), and the required temperature for gasoline fumes to catch fire is 246 degrees Celsius (475 °F). But the hottest part of the cigarette almost never comes in contact with the gas. Scientists have even tried to replicate it in the lab. In one experiment, they threw lit cigarettes into gasoline vapors some 4,500 times. Surprisingly, it didn’t catch fire in even one instance.[7]

3 You Can’t Shoot A Lock Open 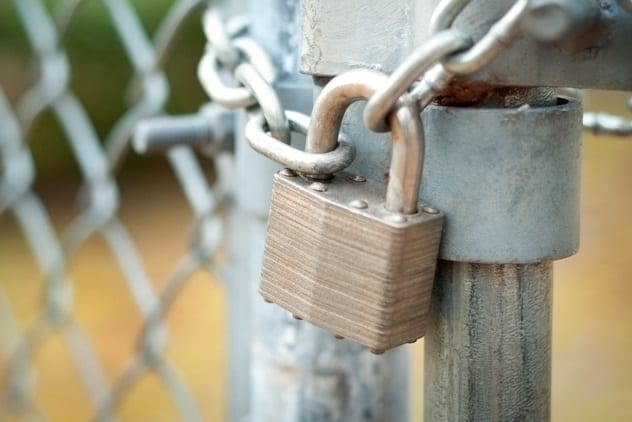 This one is used a lot in cop and detective movies, mostly to break into houses or warehouses for a raid. Different variations of it exist, but essentially, movie writers think locks are really just pieces of wood.

As you’d expect, that’s not how it works.[8] Modern locks are too strong to be simply shot open with a handgun, and you’d actually have a higher chance of getting in if you tried to pick the lock than shoot it. You can definitely do it if you were really bent on making it work—locks can be shot open with rifles and shotguns—though in the movies, they often use a handgun or pistol to do it.

Another reason cops in real life don’t use this method is the possibility of ricochet. The bullet has a chance of bouncing off a metal lock and hitting you or one of your squad mates. 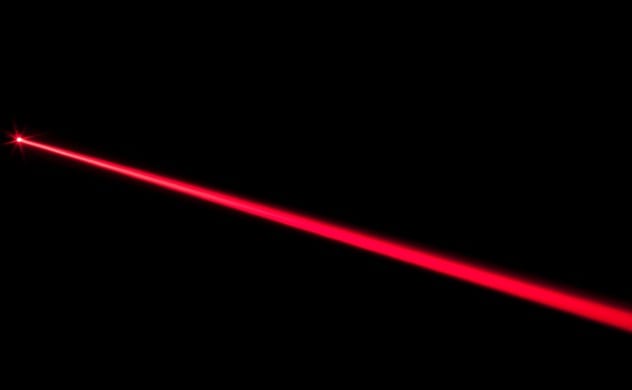 Snipers in movies are portrayed as one-man armies who can kill an entire battalion and escape undetected. In real life, landing successful shots is super difficult for snipers because of long distances, gravity, and wind. It’s more science than fighting, as they have to be able to accurately calculate all of the various variables to land the shot. More often than not, they miss.

Movies counter that chance of error by providing them with a convenient laser dot that pinpoints exactly where to shoot. For one, it’s a hugely impractical accessory for someone who’s supposed to be hidden, as a glowing laser beam kind of instantly gives away your position. More importantly, though, there’s no way a laser can precisely pinpoint the location of the shot. Accurately calculating that based on the above-mentioned variables is a major part of a sniper’s training. Even for moderately long distances, the position of their crosshairs during a shot is almost never at the same place as where the round will hit. Moreover, laser attachments don’t work over long distances and are only accurate in close-quarters situations.[9]

1 Cars Don’t Explode When You Shoot Them 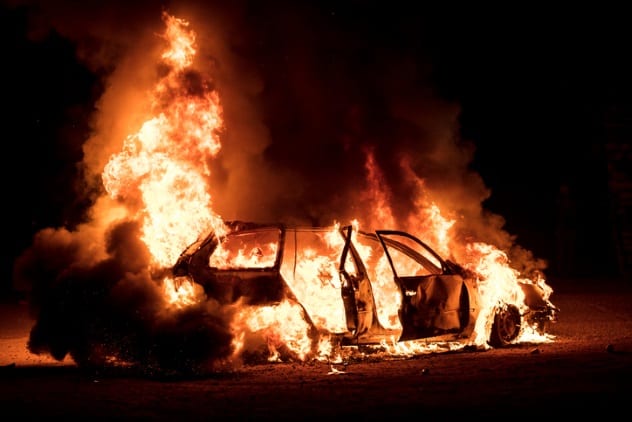 In spite of how long car accidents have featured in movies, moviemakers still seem to have little knowledge of how cars actually work. One of the biggest tropes in movies is the idea that a car can blow up from a simple gunshot to its gas tank. Even if we put aside the level of marksmanship required to do that, especially in case of a moving car, in reality, bullets can’t ignite fuel.

Mythbusters has proven that no matter how many times you shoot a car, it simply won’t explode in a big ball of fire, despite how good it looks on the screen.[10] Firearms aside, it’s surprisingly difficult to blow up a car in general, as almost all types of fuels used in cars around the world are stable enough to not allow that to happen. The “exploding cars” myth causes problems in real life, too, as many bystanders are wary of approaching the scene of a car accident to help the victims due to an irrational fear of an explosion.

Read about more things that movies and TV get wrong on 10 Things Movies And TV Get Wrong About Mental Health and 10 Movies That Got The Future Horribly Wrong.

10 Deaths That Might Not Have Happened The Way You Think