Angels and demons play a large role in many religions, with the former seen as protectors and the latter as tempters. However, many of their names and roles have been lost as time has gone on. 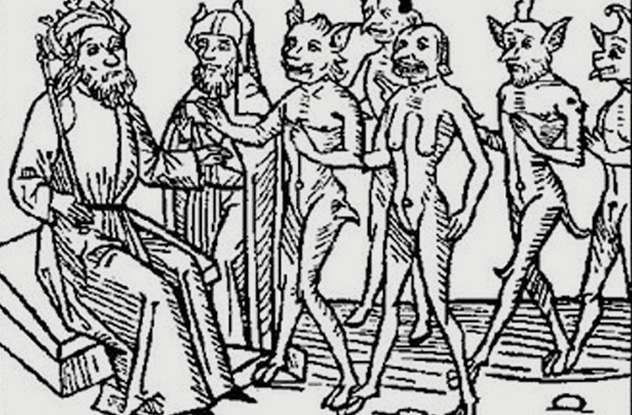 Beginning as more of a personification of wickedness, as was the custom of ancient civilizations, Belial eventually became a demon in his own right. Possibly deriving from a Hebrew term meaning “without worth,” Belial was said to have been the next angel created after Lucifer. Evil from the very beginning, he was one of the first to revolt against God and be cast out of heaven. Once on Earth, he became the leader of the Sons of Darkness, chief of all the devils. In addition, Johann Weyer, the Dutch demonologist, says that he was hell’s ambassador to Turkey.

In the pseudepigraphical book the Testament of Solomon, Belial is one of the many demons tasked by King Solomon to build his temple, controlled by a magic ring given to Solomon by the archangel Michael. Belial even danced before the king. Various Dead Sea Scrolls describe Belial as the leader of the forces of darkness, stuck in a battle with Michael. Eventually, however, Belial merged with Satan, losing his individualism and becoming just another proper name for the devil. 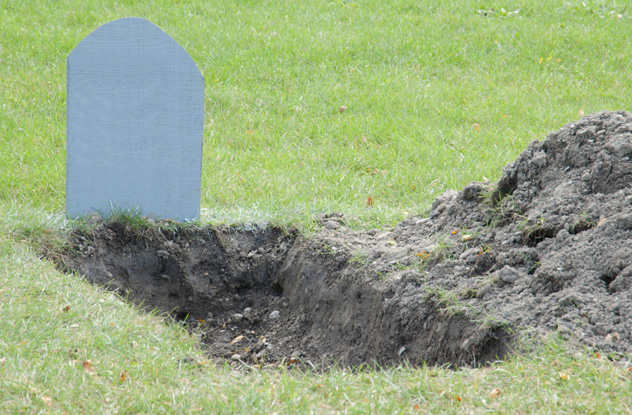 In Islamic tradition, once a person dies, he is immediately interrogated by two angels named Munkar and Nakir. Though they are not specifically mentioned in the Quran, many Muslim scholars hold to the idea that it is implied within their holy book, though virtually all of the details were created outside of it. The two angels come up to the fresh corpse, prop it up inside its grave, and question the deceased about his or her views on Muhammad.

Those who answer that he is the Apostle of Allah are deemed righteous and will be left alone undisturbed until the Day of Resurrection, the Islamic Judgment Day, when the dead will rise from their graves. If the dead person is a sinner, or an infidel, he or she won’t be able to answer, and the two angels will beat the person for as long as it pleases Allah, even up to the Day of Resurrection. (Although they will be given Fridays off.) 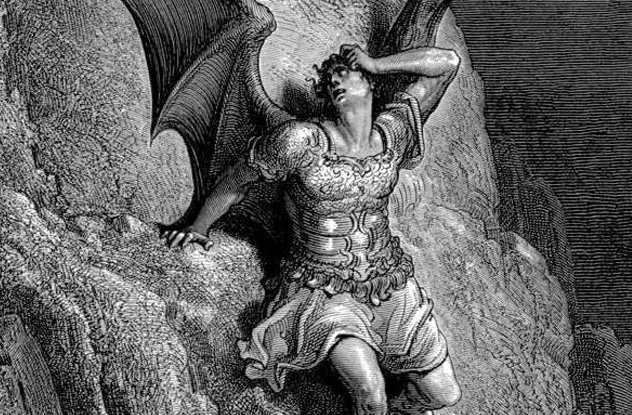 A character of Jewish mythology, Mastema is considered the chief of the spirits that arose thanks to the mating of angels with human women. Derived from the Hebrew word for “animosity,” he features prominently in the Book of Jubilees, a work considered canonical by some, and it is there where he is described as the Angel of Adversity. (In other places, he is called the Accusing Angel.) A servant of God, Mastema tempts mankind and also executes them when instructed to. In some ways, he can be seen as a precursor to, or identified with, Satan.

The supervisor of many demons, Mastema was said to have convinced God to allow demons to remain on Earth. After the Flood, Noah requested that all the evil spirits be locked underground, a request God originally granted. Before He completed that task, Mastema persuaded Him to leave one-tenth of them on Earth, explaining that sinful mortals needed to have their faith tested from time to time. Jewish legend also says that Mastema was the demon who assisted the Egyptian wizards when they competed against Moses and Aaron. 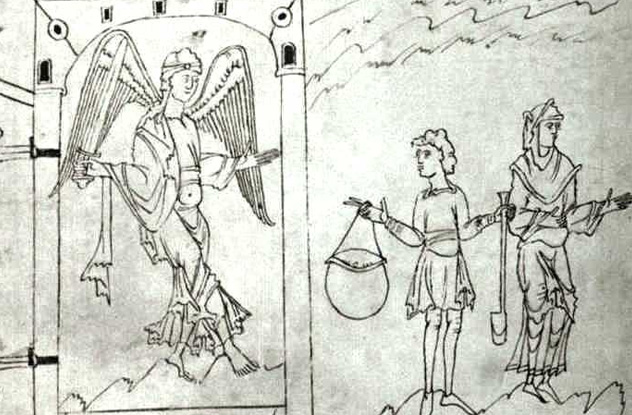 An archangel no longer named by any mainstream church or synagogue, Jophiel’s name means “the Beauty of God,” and he’s also seen as the patron of artists. Considered by some to be instead the leader of the Cherubim, winged servants of God, Jophiel is said to have played a rather large part in early Jewish history. Believed to have been the angel who was tasked with guarding the Tree of Knowledge in the Garden of Eden, he is also thought to have been the angel who expelled Adam and Eve when they violated God’s rule. (This might explain why he is sometimes shown with a flaming sword, as he would have guarded the entrance.)

Said to be a close friend to the angel Metatron, Jophiel is also one of the Angels of the Presence, a specific type of angel identified with God Himself. They often serve as special agents of God, tasked with highly specific chores. 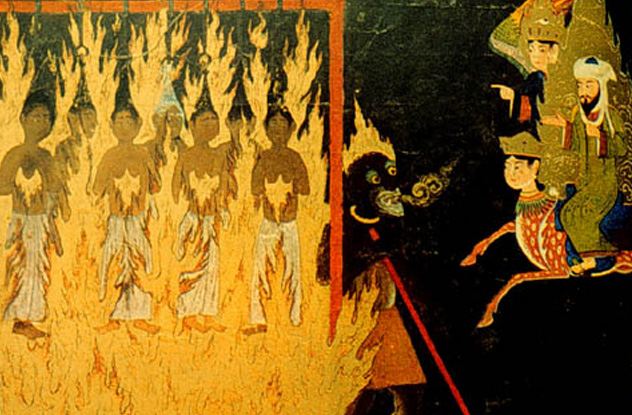 The angel tasked with guarding the Hellfire in Islam, Maalik is commanded by Allah to watch over the sinners who rejected the message of Muhammad. Accompanied by 19 unnamed angelic guards, Maalik is also in charge of the torture suffered by those stuck in hell, constantly explaining to those who try to escape that this is their just punishment for the lives they led. Sometimes, just to torture the denizens a little more, he cracks jokes at their expense.

However, for some believers, treatment at Maalik’s hand can be avoided by reciting “Allah, the Compassionate, the Merciful,” the opening line of the Quran and a phrase known as the bismillah. Maalik understands that those who quote that are going to be freed by Muhammad one day and relieves them of some of their punishment. Those who don’t recite the bismillah are doomed to remain there for eternity, a fact of which Maalik constantly reminds them. 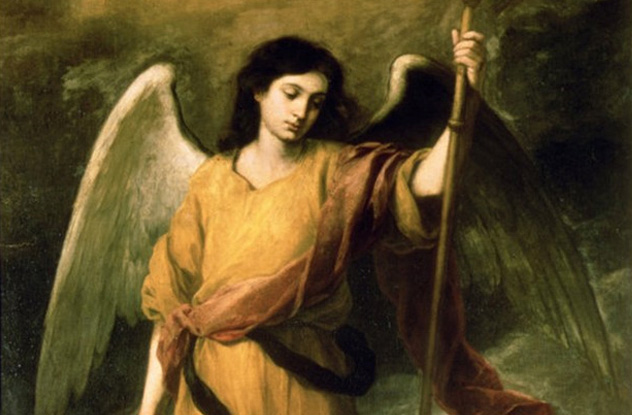 One of seven archangels in parts of the Christian faith, with Michael, Gabriel, and Uriah being the only other commonly named ones, Raphael is normally considered to be the third-highest-ranking angel in heaven. Translated as “God has healed,” Raphael is briefly mentioned in the non-canonical Book of Enoch, an ancient Jewish work, as well as the semi-canonical Book of Tobit. In the Book of Tobit, Raphael reveals that he is one of the seven holy angels who go before the throne of God.

Assuming the role of Jophiel in protecting the Tree of Knowledge in Eden, Raphael is also often seen as a healer, a role he played in the Book of Tobit. For most of early Jewish tradition, his image was often placed on protective amulets. In the Islamic faith, an archangel named Israfil can be seen as Raphael’s counterpart, though his role as the angel who will blow a horn to signify the end of the world is more similar to that of the archangel Michael. 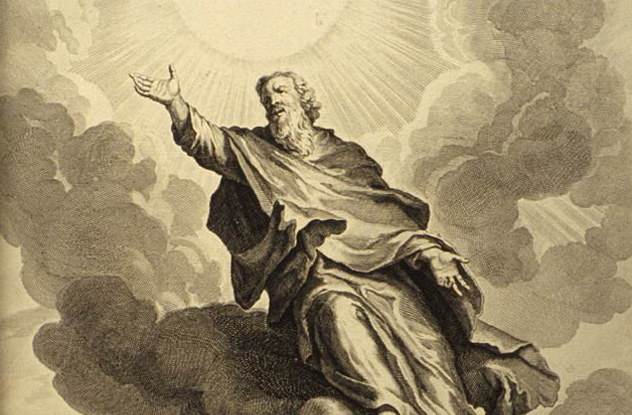 Portrayed brilliantly by Alan Rickman in Kevin Smith’s Dogma, Metatron is never mentioned in the scriptures of either faith. However, Jewish tradition, which extended to Christianity, says that he was actually Enoch, a mortal man, who was transformed into an archangel as a reward for his holy life. The youngest of the archangels, Metatron received a job similar to the one he excelled at in his mortal life: He became God’s scribe, recording everything that ever happens in The Book of Life.

The angel is also said to make various cameos throughout some of the most important events in Jewish history. When Moses died, he asked Metatron to talk to God on his behalf. (Metatron refused, saying he had already “heard the words behind the veil” and he knew his prayer would not be answered.) The rabbi Elisha ben Abuyah was said to have seen Metatron sitting near the throne of God, a big no-no, and believed that he was equal in power to God, a misunderstanding that resulted in Metatron being whipped 60 times with fiery rods to illustrate that he was not a god. 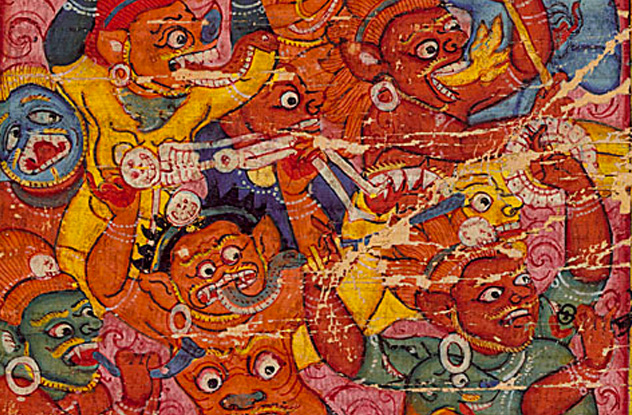 A demon often called the Tempter, Mara played a rather large role in Siddhartha Gautama’s life before he became the Buddha. When Gautama sat underneath the Bodhi tree, resolving to meditate until he reached enlightenment, the demon Mara tried to prevent him from reaching his goal. Using his armies of demons, among other tricks, he tried everything he could to stop Gautama, even showing him a vision of himself. None of this was successful, and Mara eventually left, defeated. This incident is where the famous “Buddha defying Mara” pose comes from: left hand in the lap, right hand on the knee, touching the ground.

Translated as “killer” or “death” from Sanskrit, Mara is said to reign in one of the six heavens, in the realm of desire. Tasked with distracting the rest of humanity now, he uses sensual pleasures, especially his armies of beautiful women, to sidetrack those trying to concentrate on their religious duties. 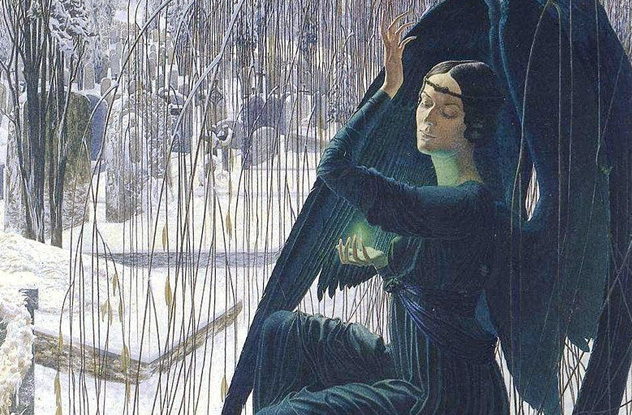 A popular figure in Jewish mythology but absent in the scriptures, the angel Dumah is in charge of the souls of the dead. In addition, sinners are placed under his watch, and he ensures that they are punished every day of the week, except for the Sabbath, when they are given a reprieve. (They are taken to a place called Hazarmavet, or the “Courtyard of Death,” where they are allowed to eat and drink in peaceful silence.) Originally seen as the celestial Prince of Egypt, Dumah had his power taken away by God and was forced into Gehenna, the Jewish version of hell.

A sort of parallel to the Christian story of Lucifer, Dumah rebelled when Moses explained that God would pass judgment on Egypt, since Dumah was the celestial prince. However, Dumah is not a tempter of mankind, merely the keeper of the souls, as every soul is delivered to him. The righteous are sent on their way to heaven, while the sinful remain in hell, where he announces their coming to the rest of the denizens. 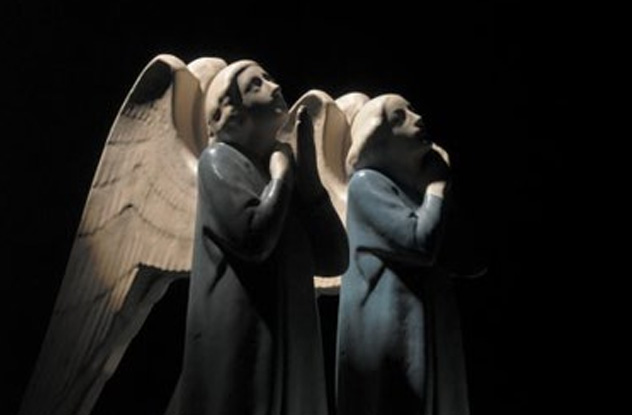 Also known as the Kiraman Katibin, Raqib and Atid are two angels of the Islamic faith tasked with a very specific duty: They record the actions and thoughts of every human on Earth. Raqib records all of a person’s good deeds, and he sits on the right shoulder. Conversely, Atid records sins and sits on the left. (Luckily for most, he doesn’t open his book until childhood is over; this is similar to Catholicism’s age of reason.)

For every good intention, you receive a minor good point. With every good act, you get a major good point. Sins are defined only as actions and given a major bad point, with thoughts luckily being free from punishment. Once a person has died, Raqib and Atid are finished with their duties, turning over the dead to Munkar and Nakir.